Continuing their ongoing rich program, which rotates weekly, featuring solo-presentations at their project space (Tennis Elbow), The Journal Gallery in NYC is currently showing work by Michael Kagan (featured). Coinciding with International Surfing Day, which is held annually on the third Saturday of June, the gallery has his all-new series of works titled Mavericks on display through today.

We had a chance to chat with the artist about this all-new series of work, and find out a bit about his connection with surfing, the inspiration behind this series and the technical aspect of these intense and texture-rich paintings. 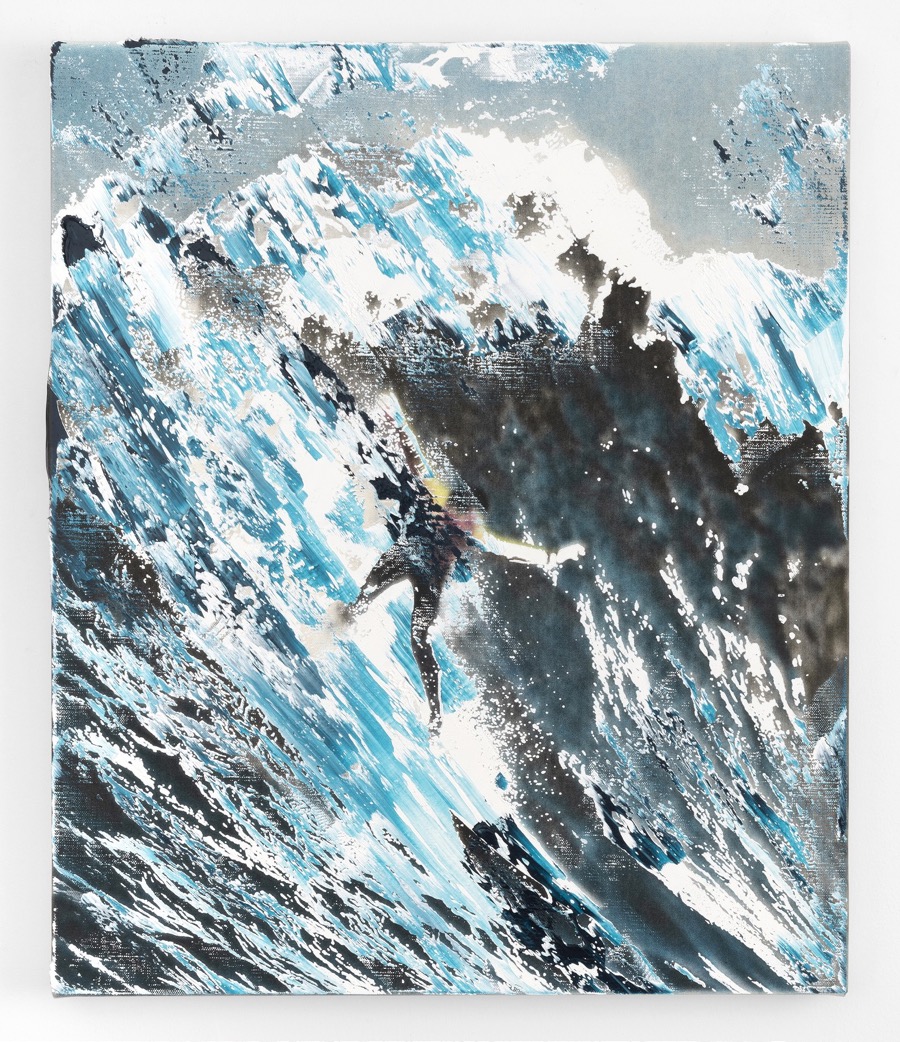 Sasha Bogojev (SB): Was this body of work made especially for this exhibition or was this just the right moment and place to present it?

Michael Kagan (MK): I made these 12 paintings specifically for The Journal Gallery and The Tennis Elbow weekly solo shows that they do. I have never shown my new surf paintings before and I thought making them for this space was the perfect fit. It’s been one of my favourite galleries for a while, with great space, great vibes, and one knockout show after another. 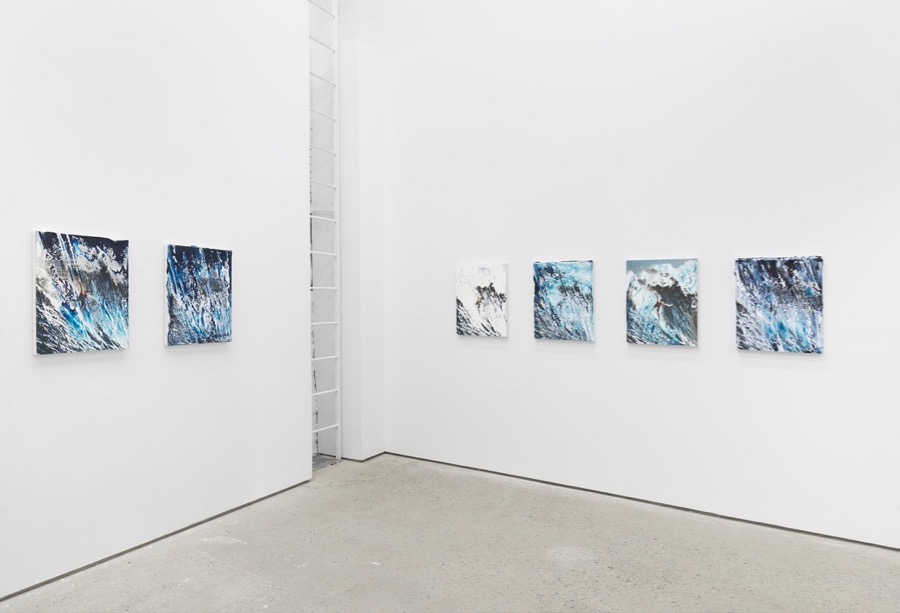 SB: How did you come up with the idea to make such focused series?

MK: I have been playing around with paint on top of a photo for probably five years now. It has been kind of a side project that has been slowly and quietly evolving in my studio alongside my other painting style that I am known for. The photo idea has now turned into silk screening and some other new printing techniques that I am still fine tuning, but I’m excited about where it’s headed for me. I first did rockets, then mountains, and now it is clicking super nicely with the big wave surfers. 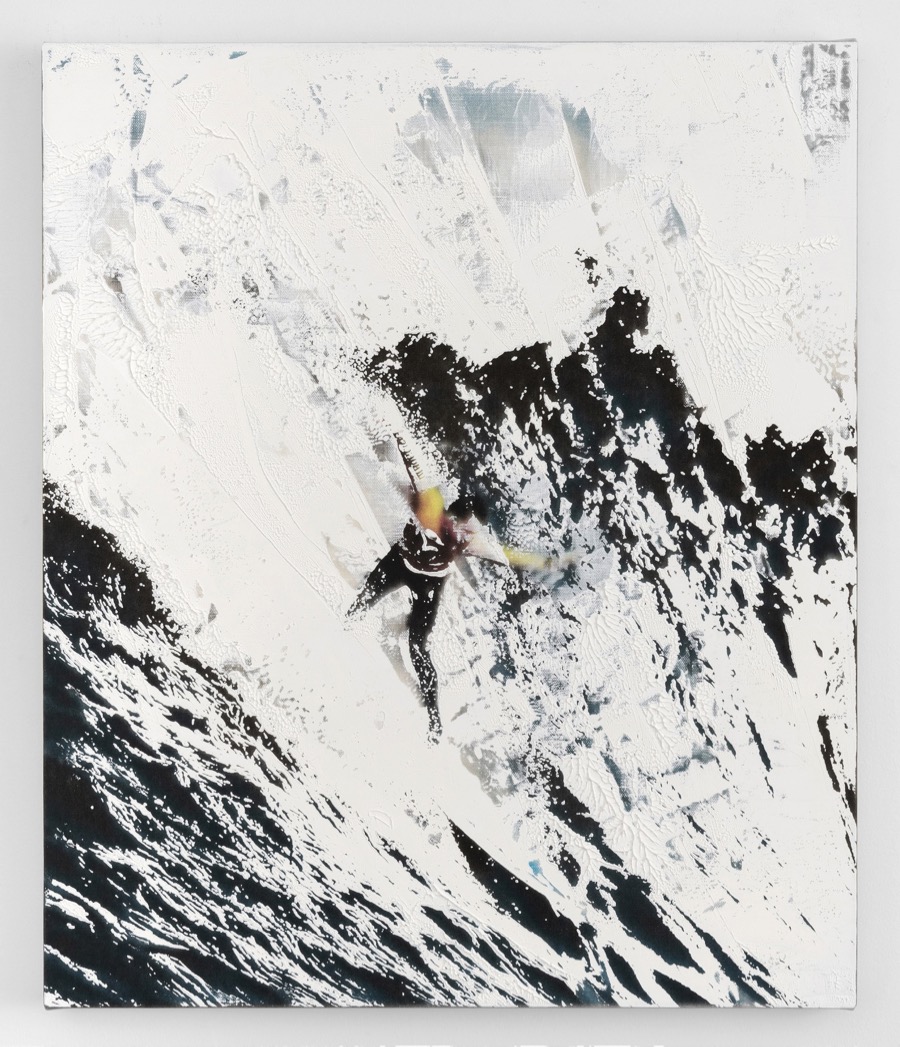 SB: Looks like they’re all based on one photo. Who is the surfer on it and when is that photo from?

MK: The photo is of Mavericks in Northern California. I had this big wave surfing book from when I was in high school. When I moved out of my parents’ house over two decades ago, I had a box of books I took. Through numerous moves, roommates, girlfriends, etc, this book somehow stayed with me and ended up in my studio. I cut out the pages and started painting on different pages here and there. Then I found 10 more copies online and ordered them to have as well. 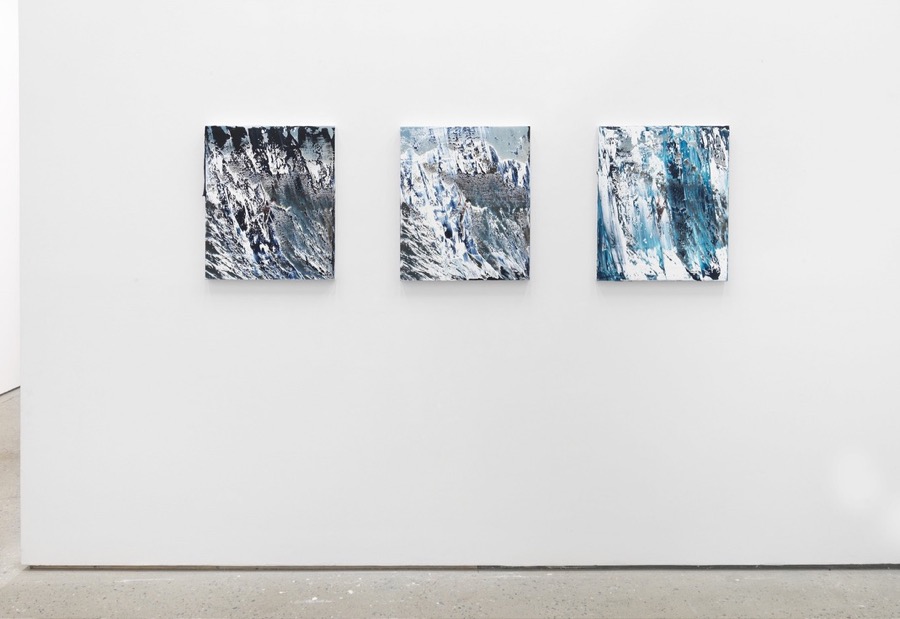 SB: Whats the process looking like on these works?

MK: The technique is a series of different oil techniques – silk screening, printing with oil, and then just straight up painting. But everything is just oil on linen. I am almost breaking down the image as I build it up. My favourite artists and paintings to look at are ones where I can’t completely figure out how it was made. 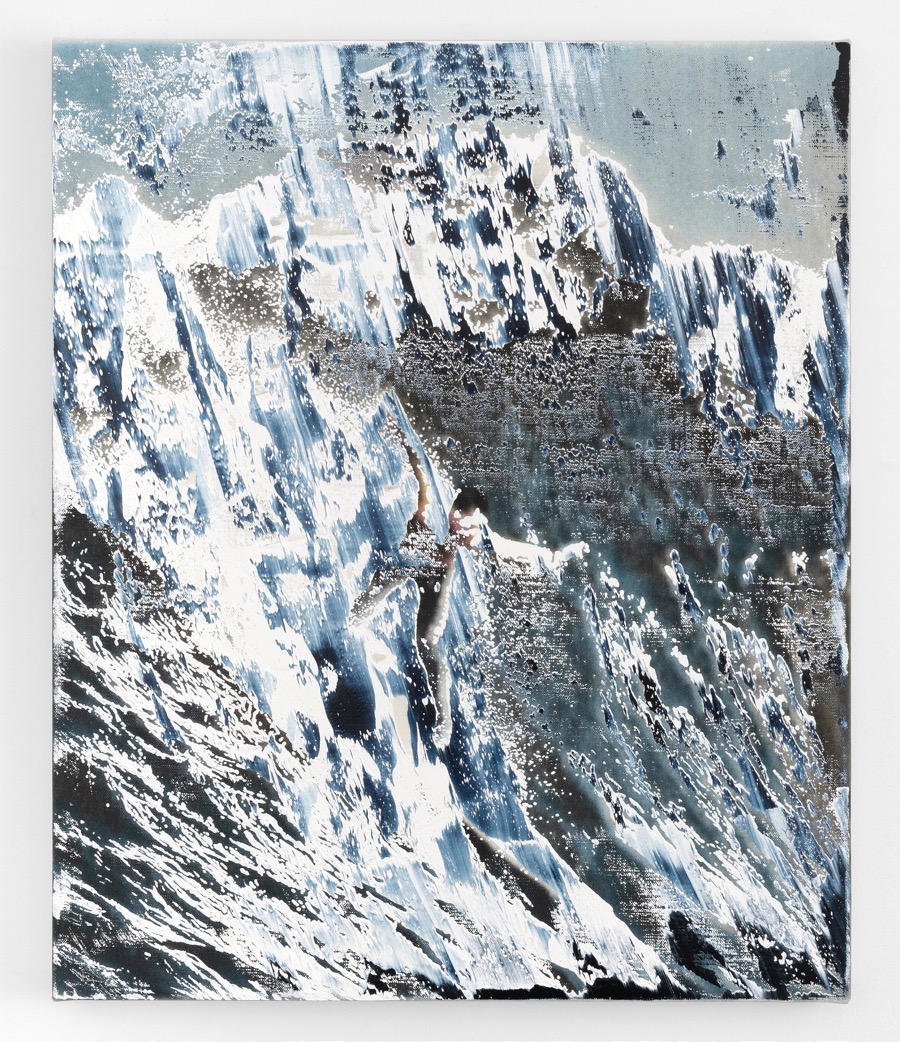 SB: What is your personal connection with surfing?

MK: I grew up in Virginia Beach and my parents live on the beach. Surfing was something I did growing up year-around. We would strap our boards to our cars and head to school, but instead of playing a sport after classes we would all head to the beach and surf together. I never was taught, it was just something I learned from doing and eventually got quite good at. It was always small waves in Virginia, but I like the idea of these massive Maverick waves. It feeds nicely into the ideas behind my other works about “man pushing the limit.” 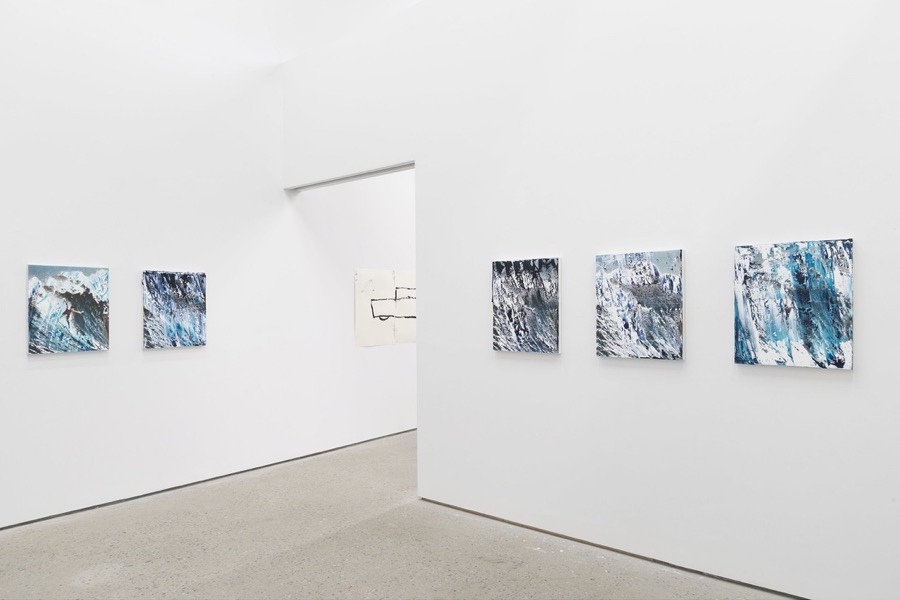 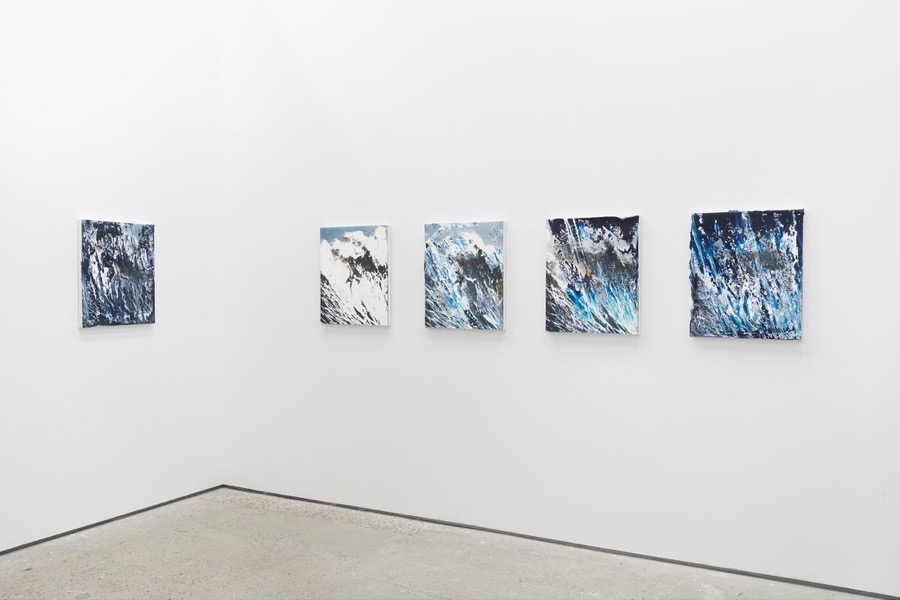 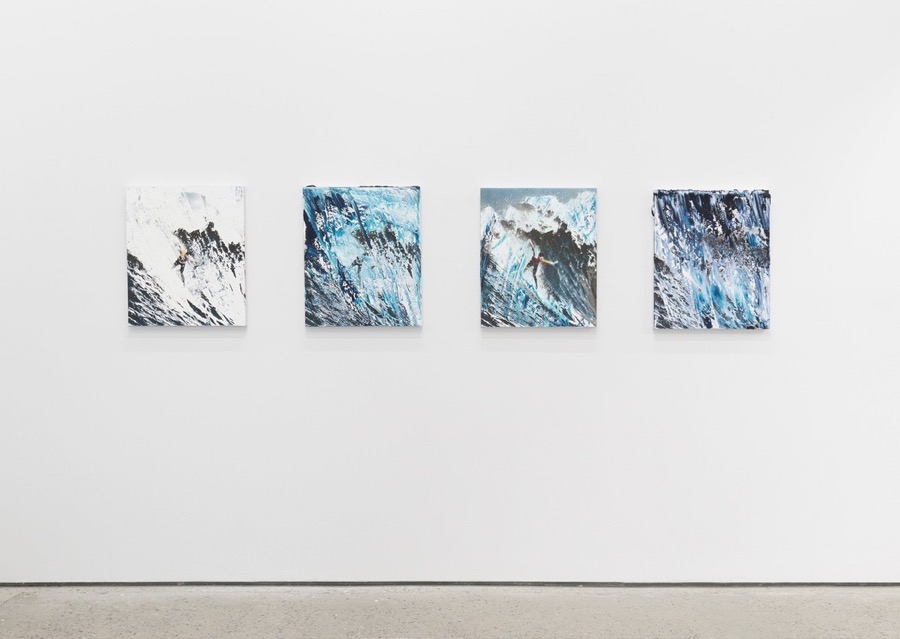 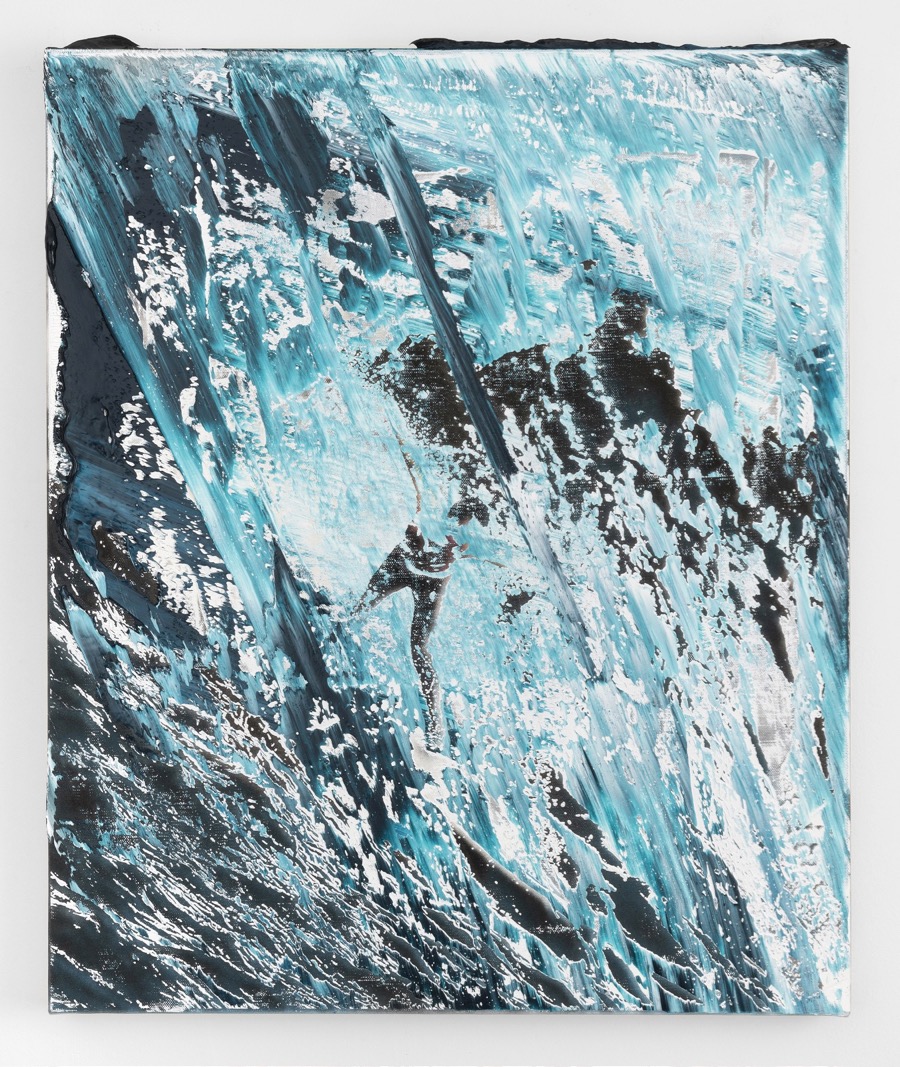