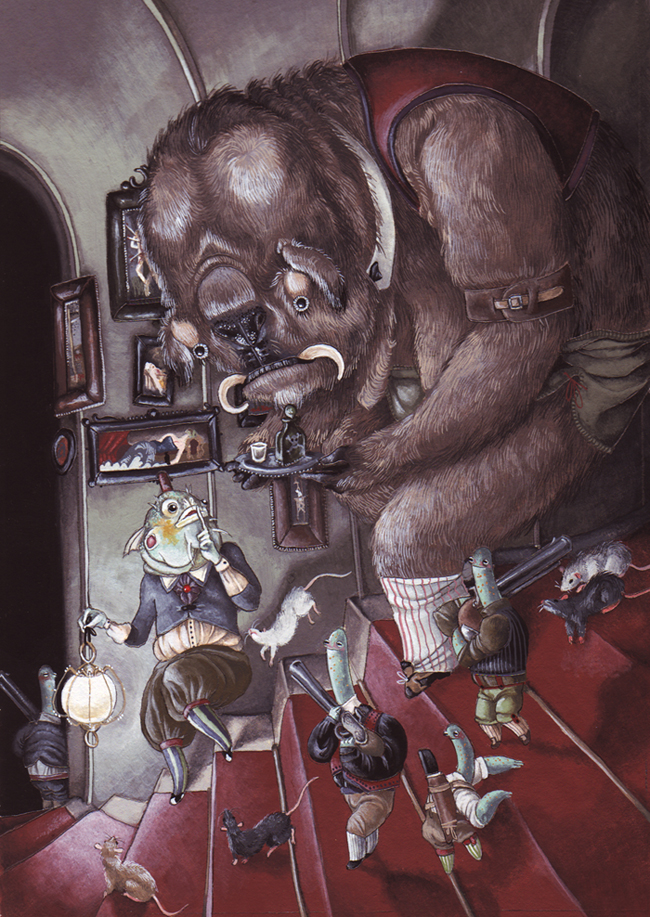 When you look at her work, one would suspect that “detail” could have been Allison Sommer’s middle name. You can’t help but move your head closer and closer to the painting and then shake it in disbelief at how meticulous her brushstrokes are. As a matter of fact, she often paints under a magnifying glass to make sure she get the desired effect. What is even more amazing is her “story-telling” does not suffer from this focus on details. Her paintings always seem to be a frozen moment in some epic adventure or strange circumstance that stimulates the viewer’s imagination.

Allison took some time to sit down and answer some questions for us … after the jump. 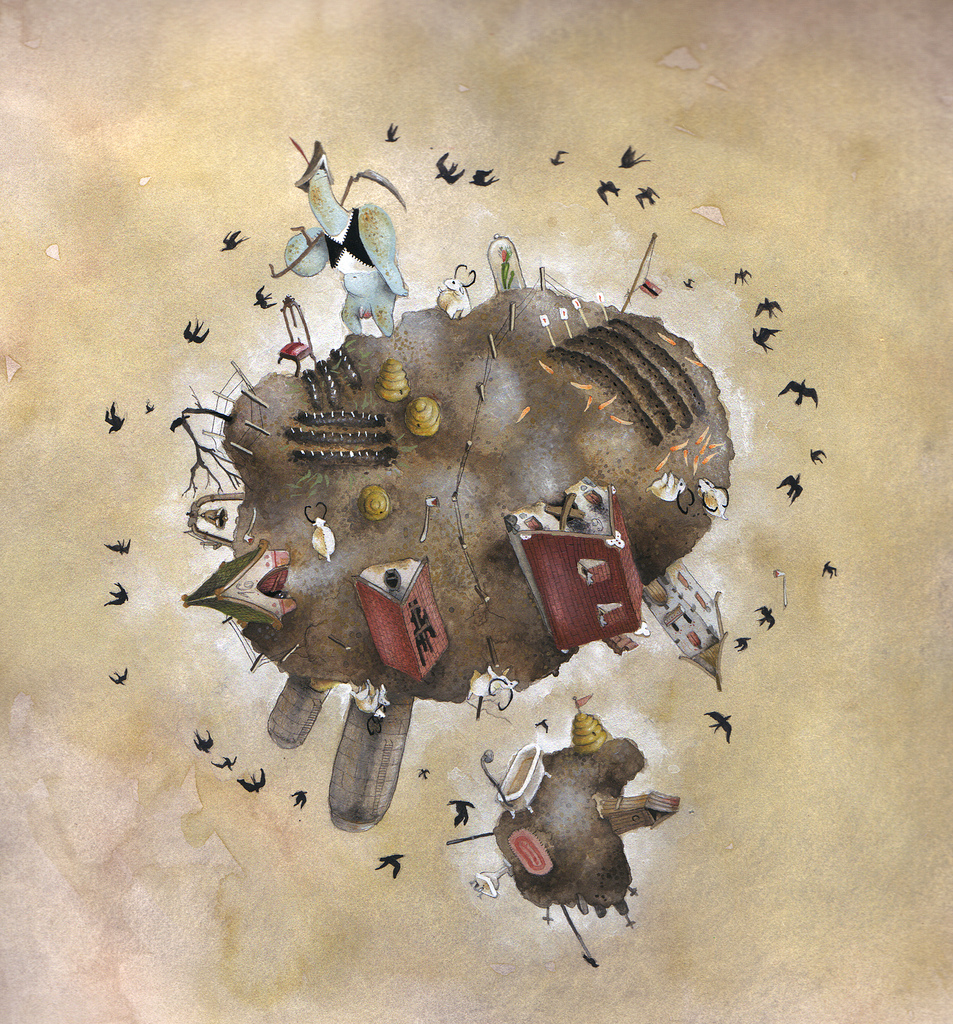 Arrested Motion: Tell us a little about your art.

Allison Sommers: (man, a stumper right at the outset–!)

I think in my work I’m always trying to get at another little piece of a vaguely unified world of creatures. I’m not entirely sure that anyone’s told me the master plan yet, least of all those little bastards I paint.

What’s important to me is that I try to keep both the narrative and the meaning of my work at least slightly ambiguous; I dislike the notion that there is one certain way to unpack the meaning of a painting, or that there is a preachy intended message therein contained. Thus I like my characters to be ambiguous, some more sympathetic than others perhaps, so that the narrative of and interaction within each painting isn’t immediately clear– and can differ between viewers.

AM: Can you tell us a little about your background? Any formal art education?

AS: I have a BA in history (concentration on Late Medieval/Early Modern England) from the University of Virginia. At least thematically it continues to influence my work. As for formal art education, I did take a summer semester at RISD, but the classes I took don’t relate too closely to what I’m doing now artistically. I suppose I fall into that large category of folks who have since childhood been obsessively art-ing in some way or another, but I didn’t pursue it in higher education. 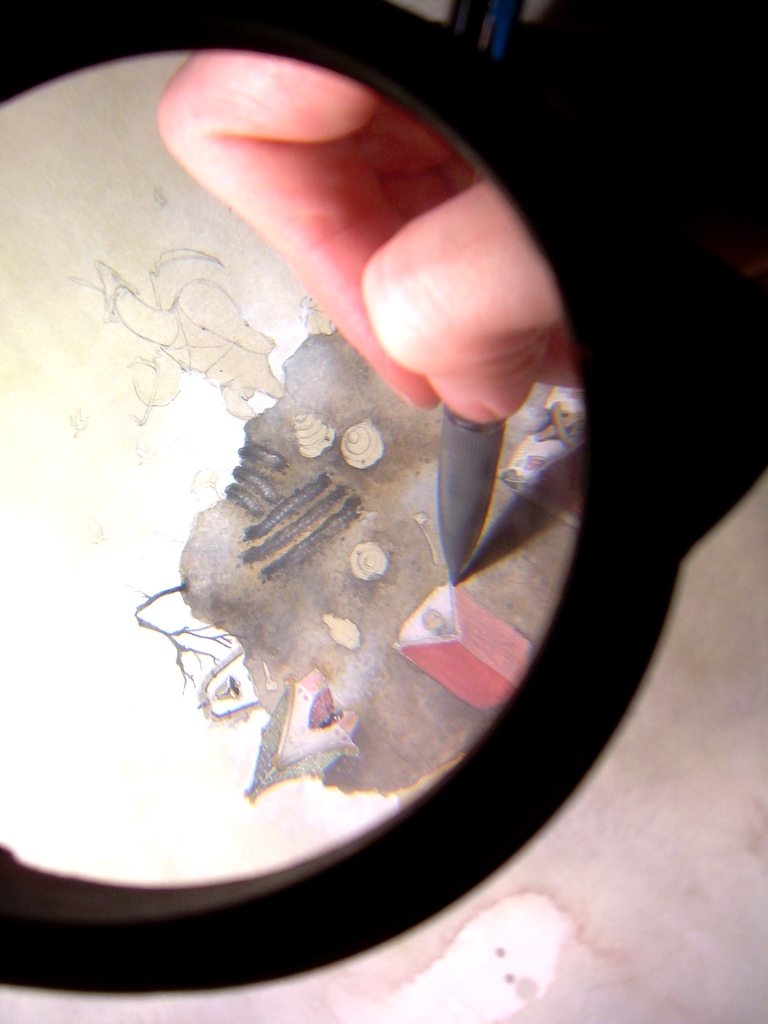 AM: Your paintings are known to be very detailed and sometimes you paint under a magnifying glass. How did you come up with this technique and is there a reason you decided to work with such detail?

AS: I never made a conscious decision to ruin my eyesight so!! I have a feel for a certain scale, I guess, and in pursuit of that I go deeper and deeper into detail.

To me, there’s something sublime and really disorienting about painting that detailed and small– one’s own sense of physical perspective falls away after a while and you can really get into the work. Painting like that is a true joy to me– the hours I sit at my table working are in some manner like playing with a tiny dollhouse…

I remember as a kid sitting for long periods with a spread of a Waldo book and “walking” around in it– not taking the scene in as a whole but rather coming across each detail as if traveling through the scene– I guess that desire hasn’t left me yet.

AM: You seem to have some reoccurring long-necked characters in your paintings. Do they have names? Can you tell us a little more about their lives and personalities?

AS: I am STILL trying to get them to tell me their names. They’re not very cooperative, not with me, anyway.

At any rate, they’re very morally ambiguous. They may be a little cute in their little plus-fours and knee socks but they’re also violent, wasteful, mean little fornicating creeps, too.
In some ways I think what attracts them to me so much is that they are so ambiguous, and thus aren’t stand-ins for any one concept of being (they’re not particularly beautiful, or socially meaningful, or laudable in any sense really)– they’re very versatile meaning-wise, without having any real point of reference because they’re my own creations. I think it’s for that reason that I’ve been so attracted to working with them rather than human characters lately. 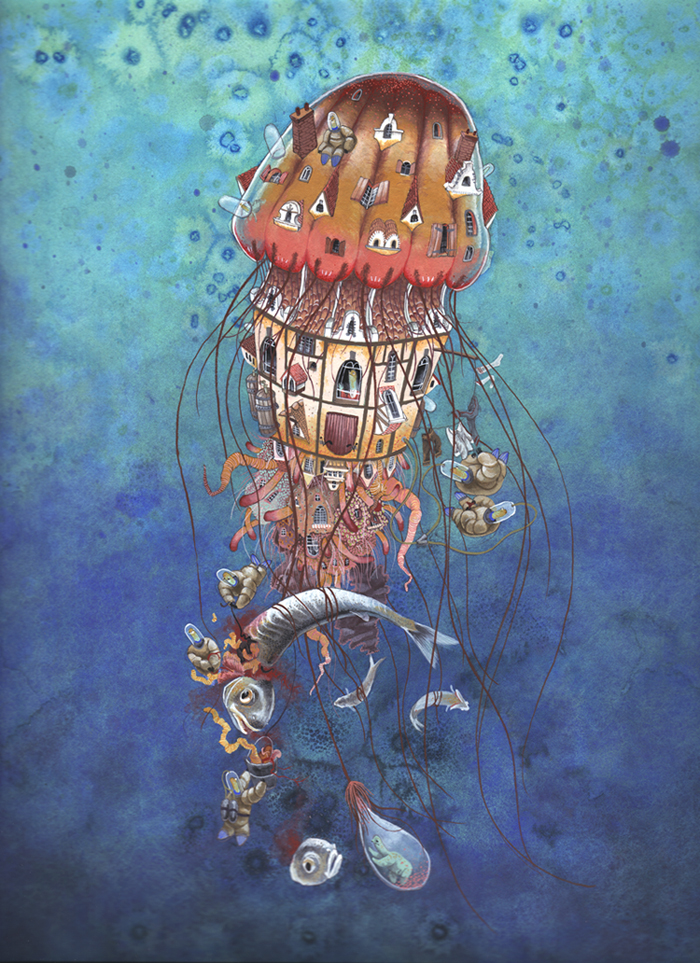 AM: Sometimes you accompany a painting with an explanation of your inspirations. They seem to be so varied….books, poems, music, even getting your teeth pulled. Do ideas for paintings pop up in your head at random times with no rhyme or reason?

AS: They do, definitely. I keep a sketchbook with me practically everywhere I go and at least jot down ideas when they do come to me. I’m amused by, and interested in, so many things both around me in my everyday life and in the canons of art and literature, and I like to incorporate those things into my work.

Often times I’ll be struck by a phrase– a cliche, something that’s lost its meaning from repetition– and I love playing around with what they mean, perhaps being a little silly and reseating the connotation in a new way. I do want my work to be a least a little amusing.

That all being said, I think a lot of the themes that most attract me do lurk around in the art and cultures of the 18th & 19th centuries– but that’s the history nerd in me.

AM: You seem to have a fascination with entrails, intestines, organs, and anatomy. Do you have a medical backgound?

AS: Not in any formal way, although my mother studied medicine for a while and thus from an early age I had at my disposal those sorts of books– Grey’s Anatomy and the like. I’ve always been compelled by viscera, not so much for the -yuk- factor but the arresting beauty –and color!– of the flesh we carry around with us every day. There’s something very unifying about it– and always a little strange– because you do feel something basic about it on a gut level. Hah. 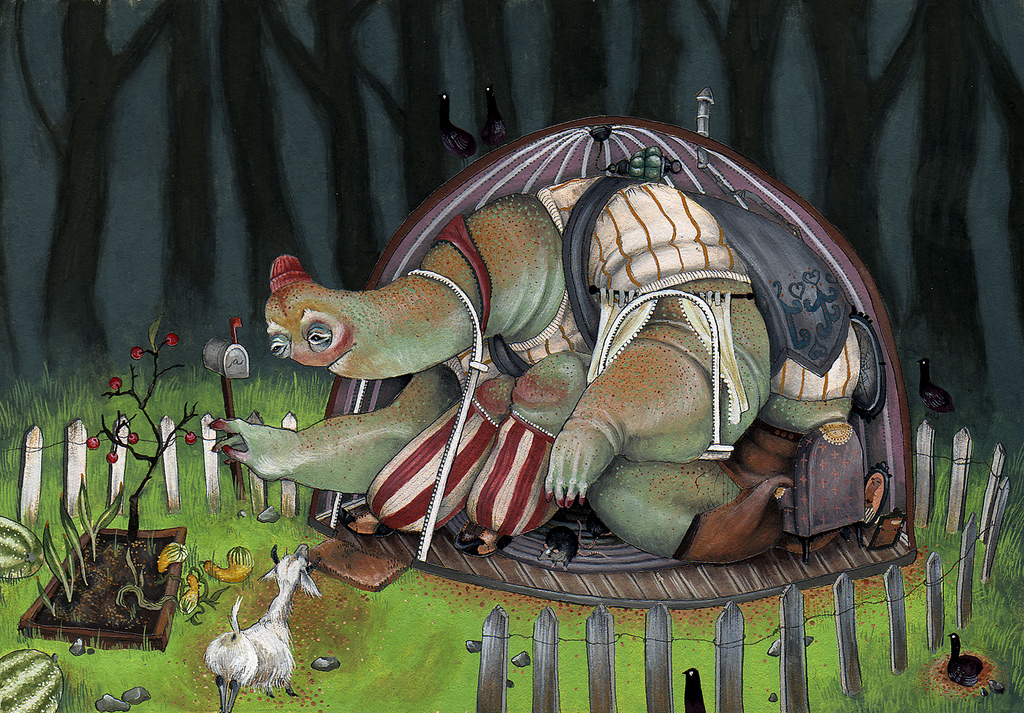 AM: Your paintings often seem to be a frozen moment in time of some fantastic story. Do you have a story in mind when you are painting?

AS: I typically know the moment in time I’ll be painting before I start, but that moment’s location in a narrative develops as I work, if that makes any sense. Usually I have a pretty good idea of what I want to communicate, but it’s usually only half-formed by the time I start lineart. It’s the details and tiny objects that really tell the story anyway, and they find their way into the painting as I’m working.

AM: I’ve seen some wonderful sculptures you have done of your characters. Any plan to explore this further?

AS: I’m definitely working on it– I have a few poor fellows half-born on a work table right now. I don’t think that I’ve found my medium in sculpture yet– I still feel really awkward while I’m working, somehow the scale and material aren’t right yet– so I’m going to struggle a bit until I find where I want to be working. 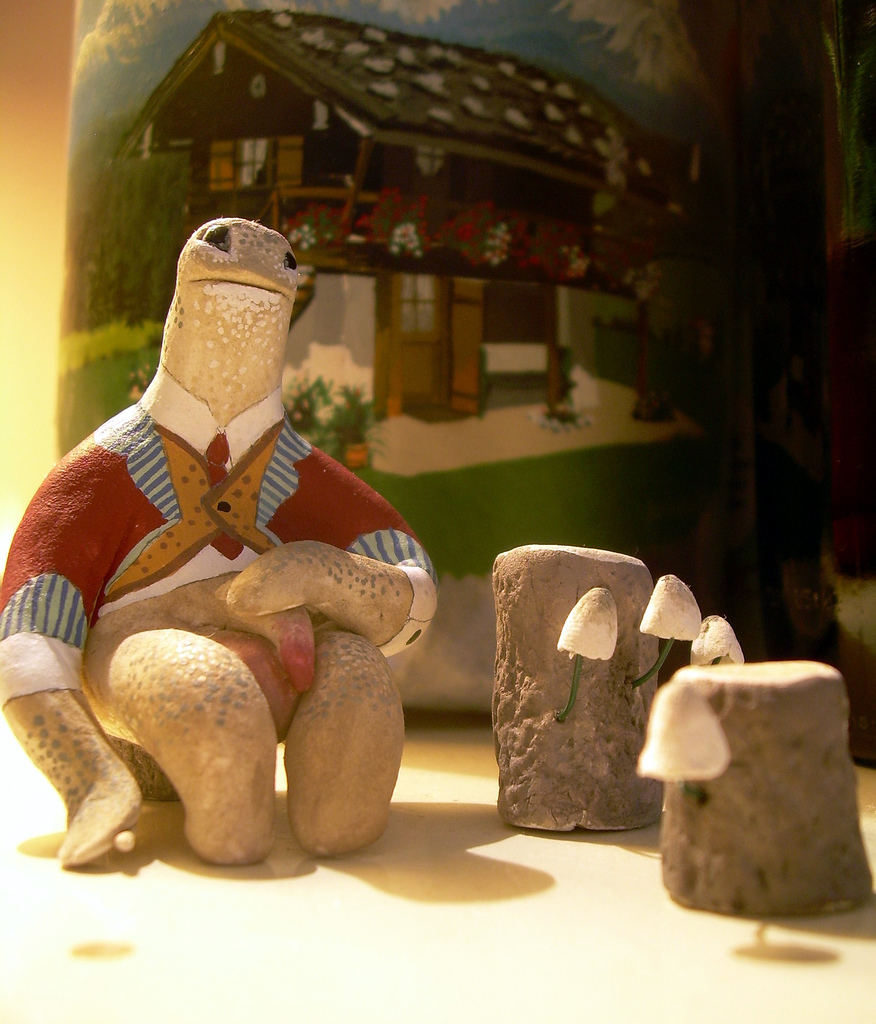 AM: Tell us some other hobbies and/or interests of yours outside of art.

AS: I’m an insufferable junkstore/vintage crap/doodads/knick knacks collector. (I say vintage crap because of my price point right now– one of these days I’ll have capital-A ANTIQUES, haha) I love old silly things– bad taxidermy, weird ceramics, dour old cabinet card portraits, etc– and ceaselessly collect them from whatever stores I can. My studio looks somewhere in between an old man’s library and a wunderkammer, except also with old lady hobnail glass and fiestaware in it.
I also keep a lot of plants and terrariums– does that count as a hobby?

AM: Tell us about what you have coming up in the future.

AS: I’m very excited about my Project Room solo coming up at Thinkspace next May. I’m deep in preparation for that right now. I don’t want to say too much about it, but it will begin the excavation/historical study of those long-necked fellows and the world (ours?) in which they inhabit. I think I might incorporate “artifacts” as well into that study, but I haven’t fully developed the ideas yet… 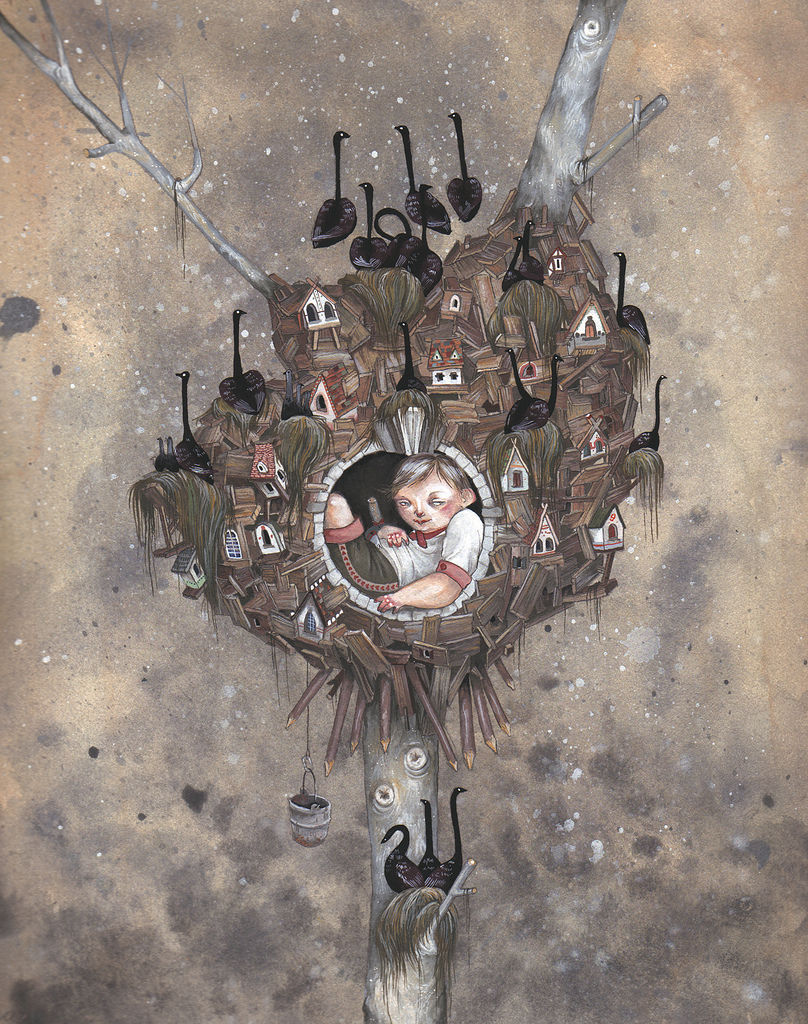 AM: Thanks for taking some time to answer our questions Allison. We look forward to seeing what you have planned for the future.