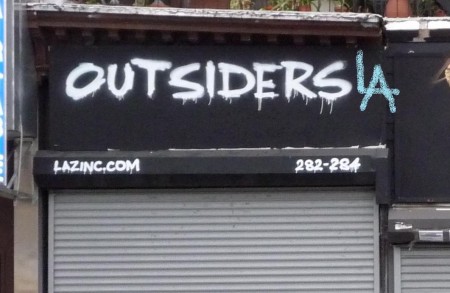 Who says the art market is having a down year? Not Lazaridesâ€¦ We’ve got a sneak peek of the UK urban juggernaut’s 2009 lineup and it seems to be bringing the gusto. With solos planned with exciting artists such as Ian Francis, Antony Micallef, Conor Harrington, Blu, Invader, Vhils, Bast, and some surprises yet to be named, it seems that Laz is bringing some Red Bull to turbo-charge the scene.

For the US market, Laz saved a little surprise as well. The “Outsiders” group show will be back for another go around, this time in Los Angeles.Â Following a highly successful show in New York last Fall (covered), many have speculated on when and where this behemoth will stop next. Well, it’s confirmed, in September 2009, the all-star group show will beÂ making it’s much anticipated return with a stop in the City of Angels.