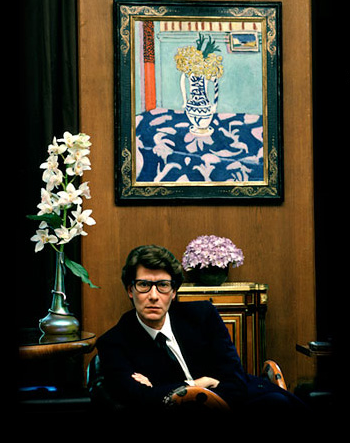 Christie’s will be auctioning off the eclectic collection of the late Yves Saint Laurent next week starting Feb 23rd. The incredible collection of nearly 700 artworks were accumulated over decades by Saint Laurent and his partner Pierre BergÃ© valued at up to $425 million including Old Master drawings, Roman sculptures, Renaissance bronzes and works by Ingres, GÃ©ricault, Frans Hals, Picasso, Matisse, Braque, LÃ©ger and Mondrian.

There are hopes among the art community that a highly publicized event, not seen since the heights of the Damien Hirst straight to auction brouhaha may cure the contemporary art market of the doldrums it has experienced since the economic downturn. Indeed, Christie’s is taking great risks to secure the Saint Luarent/Mr. BergÃ© consignment at a time when other auction houses have been reluctant to invest in high profile events as evidenced by Sotheby’s cancellation of Takashi Murakami’s straight to auction plans ala Hirst. Not only did they have to fight off an attempt to purchase the entire lot by Abu Dhabi, presumably for their Guggenheim – Louvre project, they according to the WSJ have also “loaned over $60 million to the designer’s charitable foundation, which is managed by BergÃ©, planned a celebrity-studded red carpet, produced $400 souvenir catalogs, and is having a 44,291 square-foot salesroom built into the Grand Palais, Paris’s glass-domed exposition hall near the Champs-ElysÃ©es.Â  Officials at the Grand Palais expect up to 50,000 people to visit the free exhibit of the collection next weekend, an attendance that would rival Art Basel Miami.”

Critics are sure to deride the event as another example of the excesses of the art world during a dire world economic downturn.Â  However, Christie’s is apparently willing to roll the dice here as their stock has fallen 85% since their peak in October 2007 with significant job cuts planned as well as their credit rating in danger of being downgraded to to junk, according to Standard & Poor’s.Â  There may be a lot at stake here for the art world as well, because if this highly anticipated auction flops, buyers everywhere will become even more hesitant to invest in art.

Have a look at some of the pieces from the collection after the jump.