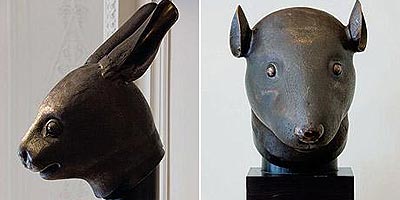 Judging from the results of the YSL auction we previously reported on, it seems that in the high-end art world, provenance is as important as the artwork itself. The Yves Saint Laurent name, just like Andy Warhol’s and Jackie Kennedy’s name did for estate sales in the past, enamored bidders and helped draw in a stunning $477 million, beating estimates with nearly 96 percent of the 689 lots sold. Hard to know what one auction with such celebrity attached to it means for the general art market, especially when talking about the much less rarified air that collectors like us reside in. It can’t hurt though – we will see how sales went at the Armory Show and its satellite fairs.

What is interesting though is that provenance has been just as important in the tit-for-tat fight between Saint Laurent’s partner Pierre BergÃ© and the Chinese government. In question are the controversial rat and rabbit head sculptures originally from the Summer Palace outside of Beijing, that was looted by the British and French during the opium wars in the 1860’s, although it’s unclear if the Chinese looters who joined in were responsible for these items.Â  Because of this controversy, it appears that BergÃ© cleverly donated two works to French museums to forestall French governmental interference in the sale (via).

In any event, the Chinese government filed a lawsuit to recover the items which failed, at which point BergÃ© said something to the effect that if China allowed the Dalai Lama to return from exile, BergÃ© would return the sculptures free of charge. We are sure this did not go over well, but the sculptures went on to sell for 38 million to a Cai Mingchao, an adviser to a Chinese foundation which seeks to retrieve plundered treasures, who then refused to pay for the sculptures. Of course, the Chinese government denies any involvement. What they did do was announce they would tighten control over Christie’s auctions in their country by requiring strict provenance, a move calculated to scare away future buyers.

Now, the newest twist is that Mr. Cai may have shot himself in the foot because the bidders he beat out were probably going to return them to China anyways. We will see where this leads.