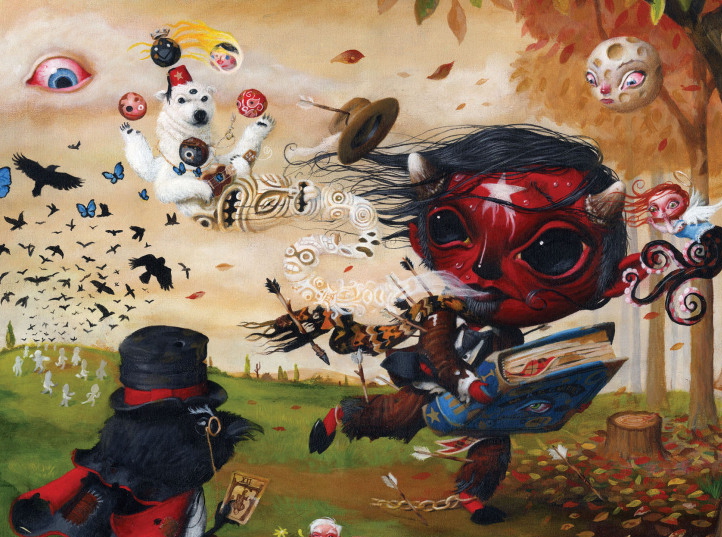 Here is a little teaser image for Mark Brown’s show coming up at the end of this month.Â  As a promising emerging artist, we are pleased to see him get his first solo show, entitled “The Lost MacGuffin,” opening April 28th at Gallery 1988 (LA).Â  Expect the usual cast of characters thrown together in complex and frenetic combinations with a touch of symbolism.

“The whole exhibit’s story starts with this painting and this Devil running. Actually he’s just escaped from the Crow King, with the help of the Octangel. See, it’s all because the Devil has stolen that book from the King. Actually, the Devil is part of a Secret Order (marked by those stars) sworn to protect the book from people like the Crow King, so he HAD to do it. And now the Crow King, fuming over the stolen property, sent out his crow henchmen, lead by the Top Hatted Magician Crow as their boss, obviously. They just about had our Devil, when the Crow produced the deck of tarot cards and is now playing the Hanged Man card. Also in pursuit of the book, since the King needed insurance when dealing with the Secret Order, are The Bunch Of Paper Men. The King cuts out chains of them from paper, sending them on commando missions like this one. They sometimes stop and pick up rocks. They really hate scissors. It’s a cold October day out, so it’s not easy to run, and the breath, visible from the devil’s mouth is freezing into some strange foreshadowing. The polar bear with the third eye and four arms is juggling 5 painted balls, where each ball represents a character from the main story you experience when seeing the entire art show. So you know in advance, those 5 characters are The Crow King and The Wrestler With The Inflatable Head, The Girl Who Catches Fire, the TV Headed Guy, and our main hero, Our Boy (unseen…for now!) The Bear is also wearing the Surprisingly Handy Key, which can open pretty much any lock – so that’s not a problem. Lets see… oh yeah, the book. Well, the book in question is a great and powerful relic and a symbol of how we all feel (or at least I do) whenever we flip through a children’s encyclopedia from the 50’s or 60’s. When I was a kid, these books were like another world for me. The title of the book is, “MacGuffin’s Encyclopedia, Volume I”. The book is actually the MacGuffin for the entire story, especially making sense to any Hitchock fans out there.”