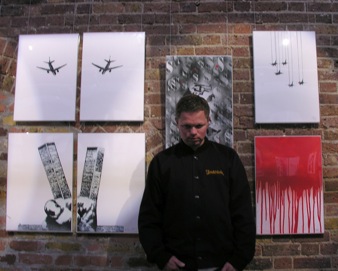 Bristol vandal Nick Walker’s long awaited solo show and concurrent 36 Chambers series book launch entitled “A Sequence of Events” (teased) opens at Black Rat Press today, May 28th. AM had the pleasure of interviewing Nick about this show where he shares information about the two new prints being released, the future direction of his work, as well as the possible end of some of his most popular characters. Check out the entire interview and get a sneak peek of the work from the show after the jump. 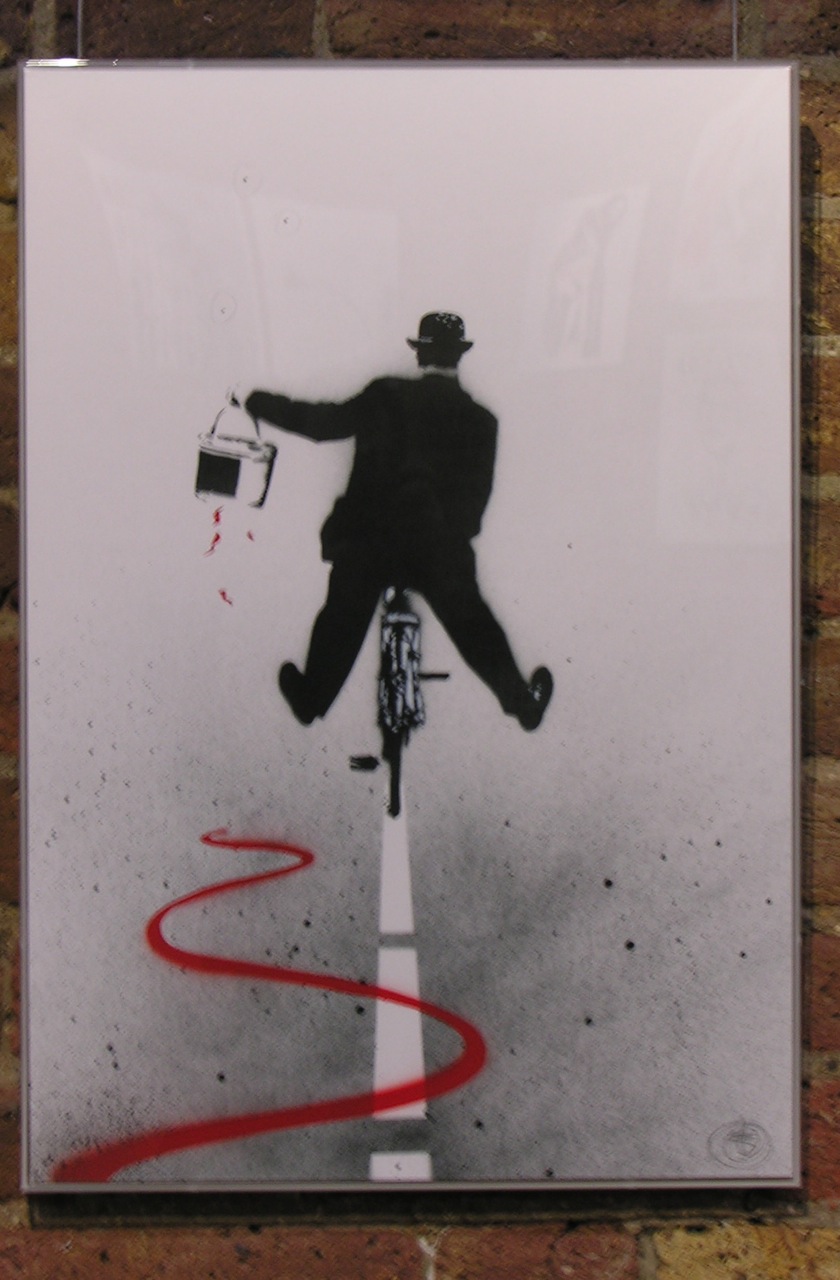 Arrested Motion (AM): You’ve been involved in graffiti for well over a decade and have strong roots in freestyle graffiti. When did you get the idea to move into more stencil based work?

Nick Walker (NW): I moved to London right at the beginning of ’92 and wanted to play around with iconic imagery and for me the stencil was the best way of doing that. You can create more impact – conventional graffiti is amazing and how I started but I thought of using the stencil to make something really punchy and to get the image to a photographic state but still be able to use spray paint. I think the first one I properly worked with was at this Snapple sponsored show at the Thomas Kettle Gallery on Neal Street – I don’t think its there any more but it was underneath a jewelers and it was my first solo show called The Underclass. It was all about kids getting more involved in quite serious heavy crime so I painted children’s hands around weapons and other images exploring loveless upbringings which can lead to darker worlds. It was also the first time I concentrated on one theme throughout the show and I think that’s the only way to do shows. I did one other show with lots of different ideas in and that just didn’t work for me so I think, for me, get a theme and work around it. 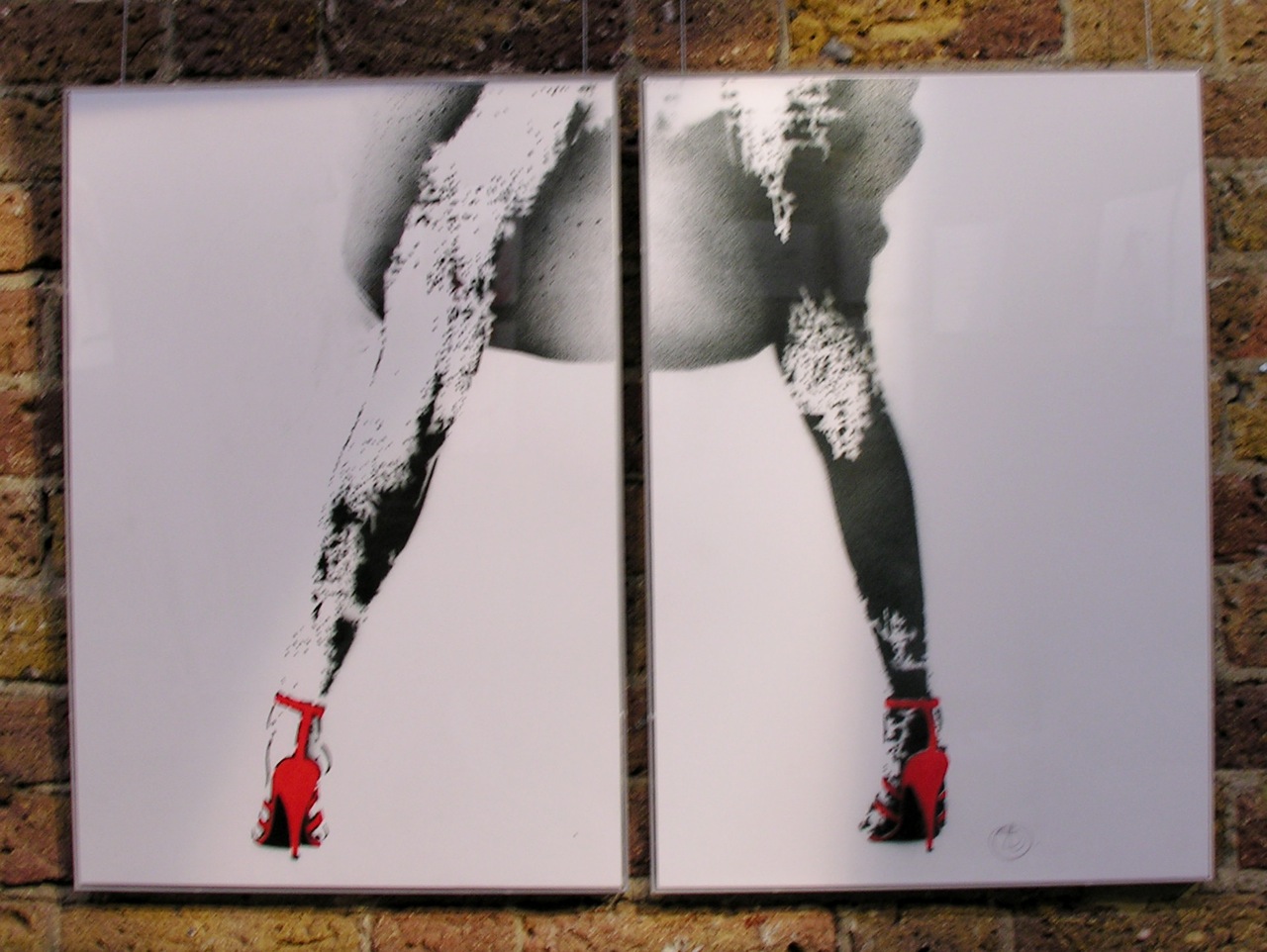 AM: How did you hook up with Drago Publishing and their 36 Chambers series for “A Sequence of Events”?

NW: Drago came to the “V for Vandal” show and we had a meeting the day after the opening and they invited me to be part of the 36 Chambers series which they’ve been working on for some time. It seemed like an interesting idea and unique concept working with the white of the page, the black of the image and then you can choose one other color. I think they like the way my work was quite dirty and raw and that I chuck a lot of paint about so I was pleased to join the ranks. 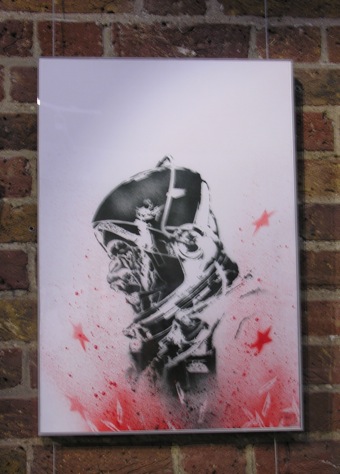 AM: You’ve mentioned elsewhere that this book is celebration of your art to date before you move on to the next chapter of work. Is this the end for much loved characters like the bowler hatted Vandal and the Apish Angel?

NW: For me this is primarily about digging up my past and putting those images to bed and then to start fresh from scratch. I want to move on, decompress and start channeling the new ideas that are swimming around at the moment and build a new body of work for my New York show that I was going to do this year but I’m now thinking will be next year. I’m in no hurry to put another show out for the sake of it. The new ideas need to be tweaked and I’m toying with various concepts and need to wait until it is all completely right. 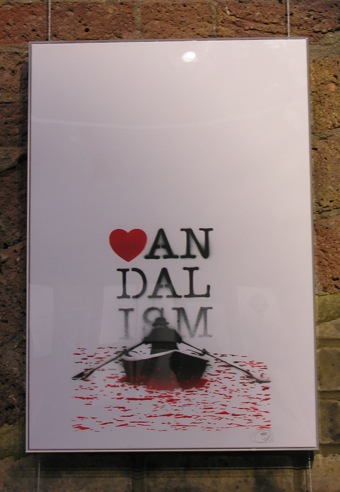 AM: So Is this the end of the much loved characters like the Vandal and the Apish Angel?

NW: Not completely the end – the Apish Angel character is something I dreamed up in Bristol in 1998 but I want to move away from that. As to the Vandal character, I’ve just finished the last of The Morning After series which is Moscow and then the final move for the Vandal is deciding on his suitable demise. 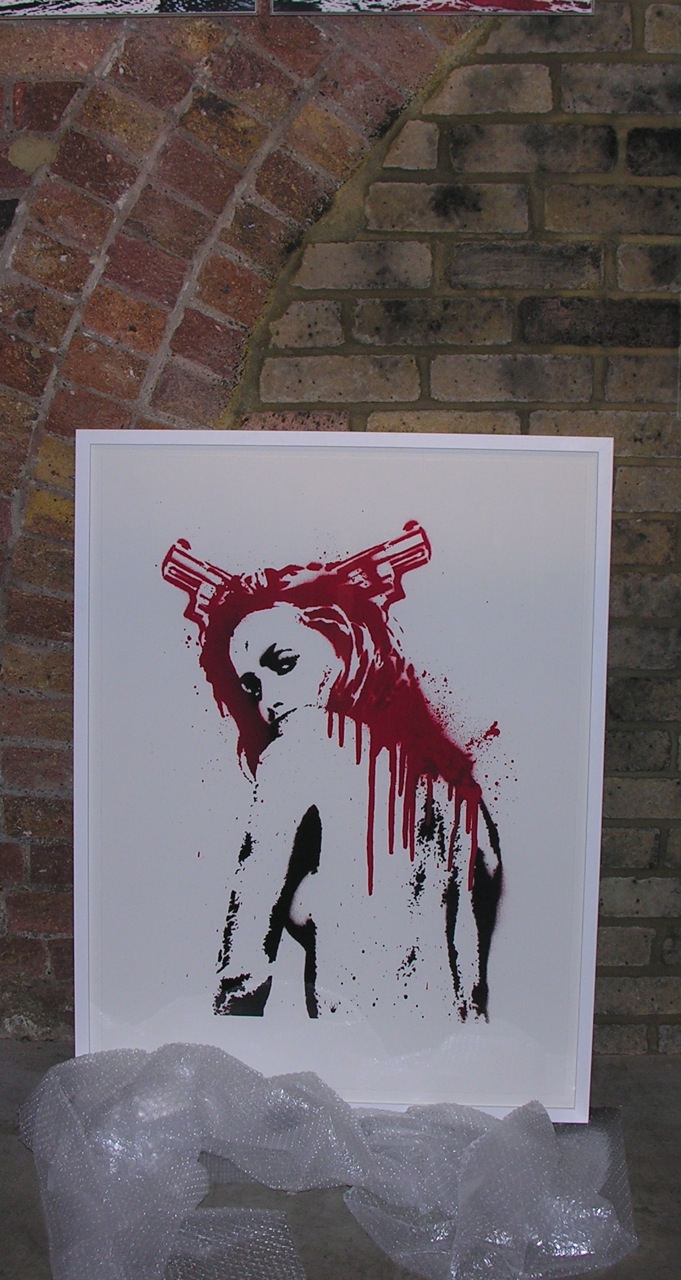 AM: As always there’s a lot of excitement around the print releases at the show. Any clues as to what we can expect?

NW: Yeah, it was a difficult choice. One print is called “28 Pig Tails” and is the front cover of the book and the other one is called “A New Dawn.” They’re editions of 50 each as I don’t want to use this show as an excuse to do a large print run and at £275 they’re cheaper than the other editions and hopefully that sort of price is doable for more people. There’s also fewer colors in these prints like in the book so they aren’t as complex as The Morning After series. 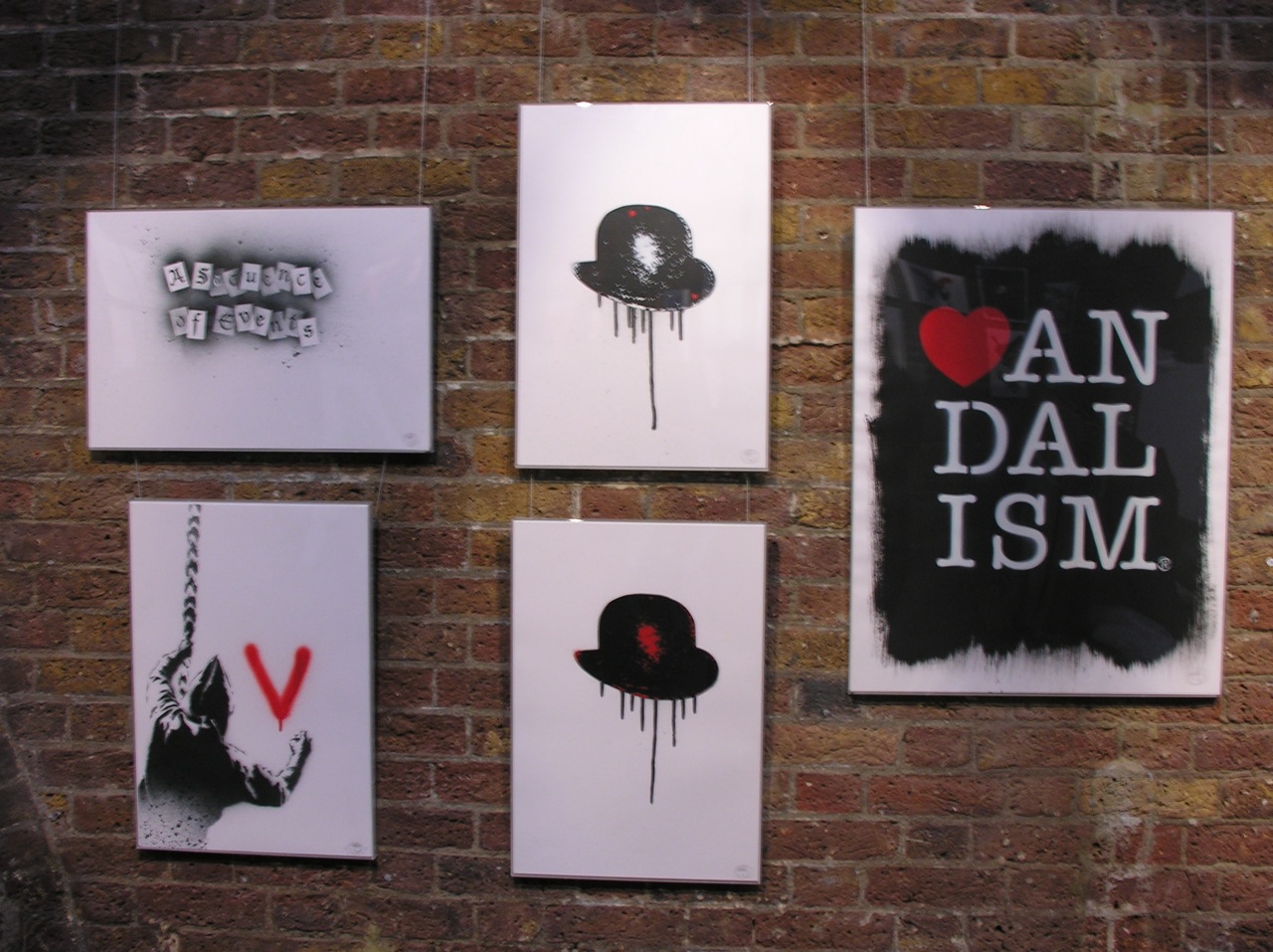 AM: We recently had the chance to see some of your “mood boards” and found them to be really interesting and strong pieces of work. How do you use these in the studio?

NW: The mood boards are something you always have in the corner of the studio to give you a release to do some freehand or practice a concept and they eventually grow. For me its the most organic form of painting – I love them and its where I want to go more in the future. Basically doing pure stencil work and editioned paintings is pretty much a thing of the past. I want to concentrate on doing things that are much more unique. Whenever you go to a mood board and start messing around the immediacy is just great – I love working like that. 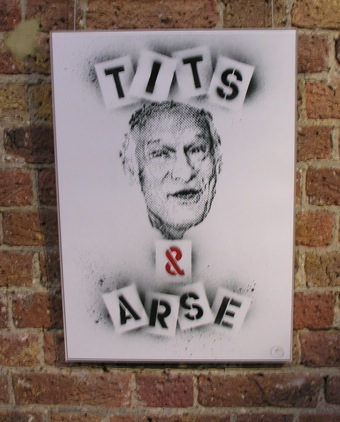 AM: How do street pieces fit within your work and will you continue to paint on the streets?

NW: Yeah of course but if you want to do a proper constructed piece which is epic you’re going to need cherry pickers and you’re going to need permission to get it up. That’s just the way it is but you’re still doing something for nothing and getting it on the street for everyone to see – the street at the end of the day is the biggest gallery you can ever dream of having. That’s what we did in New York and New York was great but there’s some people that felt like we shouldn’t have been painting their city. In Los Angeles we painted a 23 foot Moona Lisa on the South end of La Brea and had this scissor lift so we were high up and it was about 4am and I was working with a paint brush and there was condensation on the wall which caused the paint to run but we carried on. The next day I went back to take a photo and saw the paint had run completely and later on an angry mob appeared to protest thinking the piece was either the Virgin Mary with a beard or Jesus taking a crap – either way not good and the piece had to be taken down! 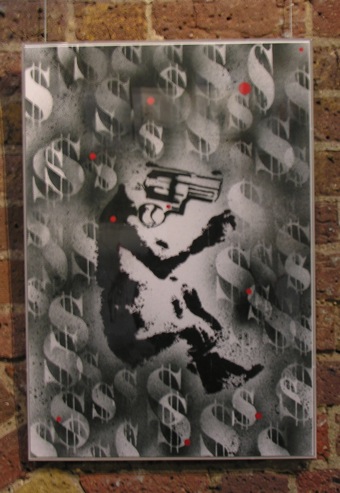 AM: What’s your favorite art book?

NW: One of my favorite books is a French art book on Jean Girald / Moebius. He’s not only an amazing comic strip artist but his paintings are from another world. I’ve got this book on his paintings and they’re amazing – just insane. Otherwise its fairly diverse though I’ve been a long time fan of these comic books called 1984 and 1994 I found when I used to spend a lot of time in Holland as a kid which are serious adult, sci-fi stuff – you couldn’t show them to your mum. They were on Warren comics and it all seemed so futuristic. In terms of the stories and artists, they were amazing. Also comic book-wise I love Jose Gonzalez, Alex Nino, San Juan and numerous others. 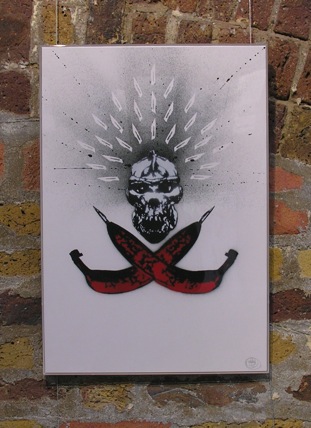 AM: What other artists are inspiring you at the moment?

NW: I’ve been into Jose Parla’s work for a long time – I love it. I was in Berne in Switzerland about eight years ago with Jose, Rostarr and She One and saw Jose doing this crazy graffiti calligraphy stuff – amazing. I think what Herakut does is really unique and I think we’ll see more and more beautiful stuff coming from them and Os Gemeos makes amazing work. I’ve got a fair bit of art on my walls now from collecting myself and I also love Shepard Fairey. It’s amazing the amount of artists that are out there creating brilliant stuff right now – some of it is so diverse and you can’t pigeonhole it any more – its a crazy melting pot of styles and ideas so I feel proud to be a part of it. Retna and The Mac from the Seventh Letter Crew are also an amazing combination and producing some insane work – check it out.

AM: Thank you for your time Nick. We are looking forward to the opening.