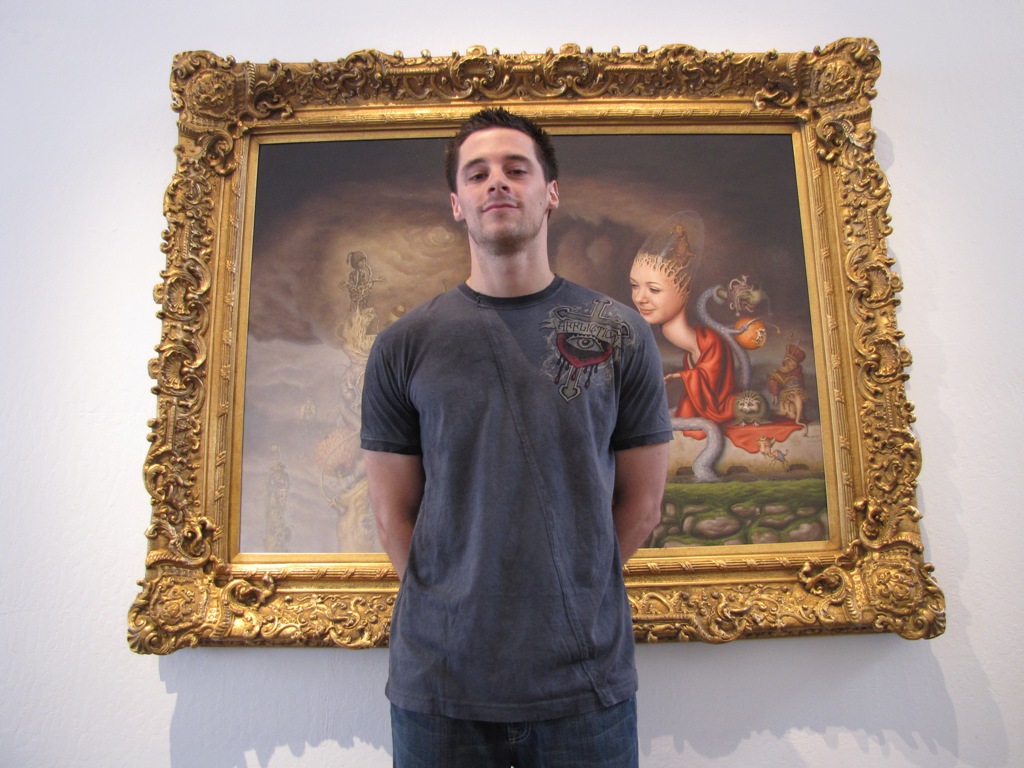 Yesterday,Â AM swung by Gallery 1988 SF to check out Matt Dangler’s latest solo show, “Searching for Satori” (previewed). Â Matt was kind enough to give us an intimate walk-through, explaining some of the pieces from the show and their meaning to him. Â Check out what he had to say and our exclusive pictures, after the jump. 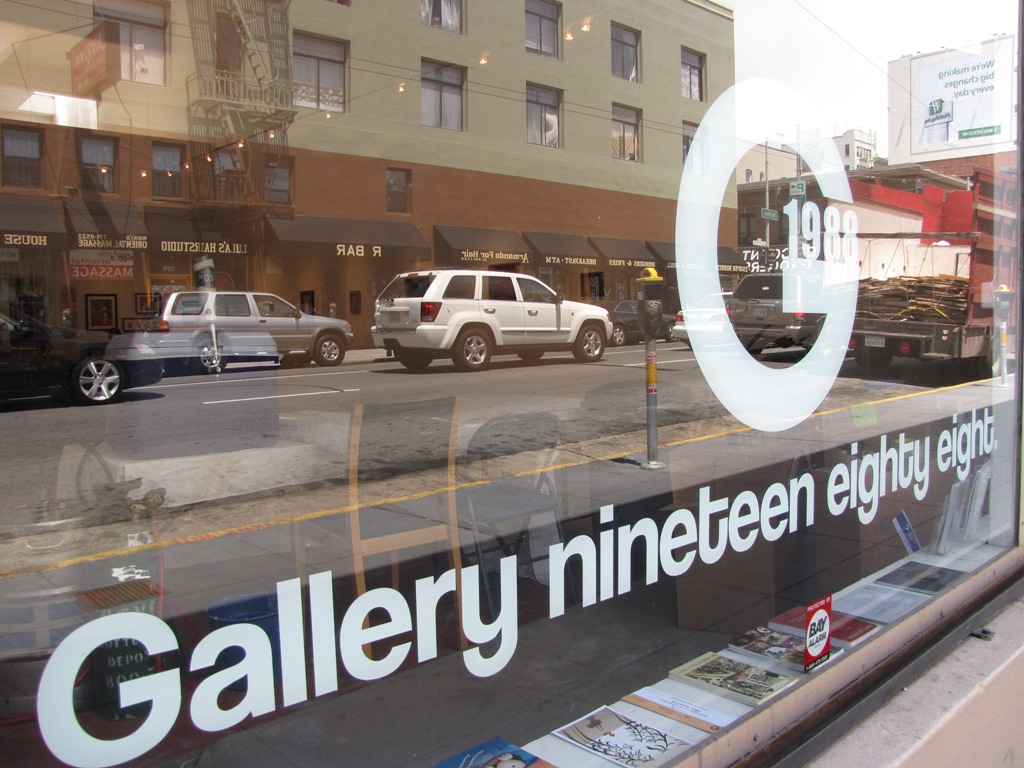 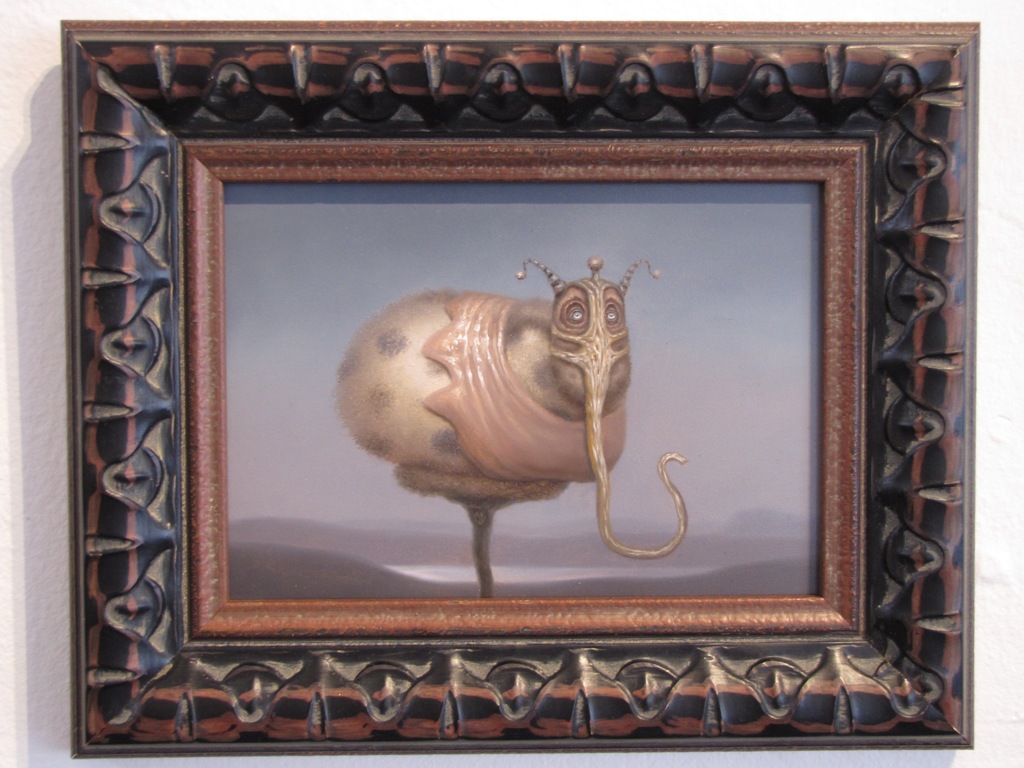 MD : “So this one’s called the “Grey Spotted Foggler” and it was inspired by the Rock Eater from the Neverending Story, you can see it in the eyes. Â It was actually the first painting I did for the show.”

AM: “It’s great! Â How long does something like this take to create?”

MD: “I’d say around 4 days. Â To paint it only took about 12 hours, but the drawing always takes the longest.” 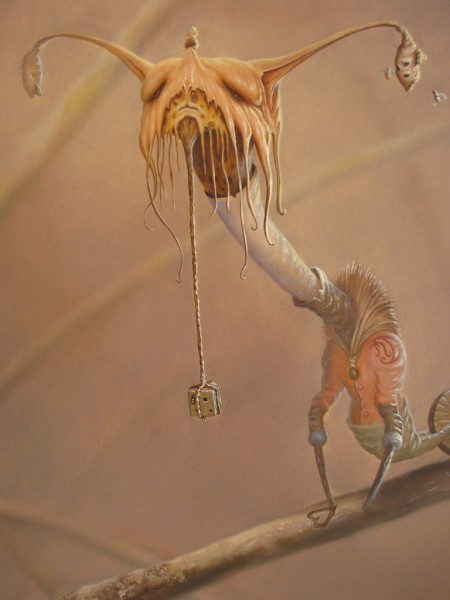 MD: “This one’s entitled “Moving On”, a lot of my work is kind of like a diary entry for me and they’re fueled by my emotions. Â I guess I still have some inner turmoil from past relationships.”

AM: “And so this you moving on from those relationships?”

MD: “Right, from the emotion of that, moving forward. Â It all metaphorically represents that.” 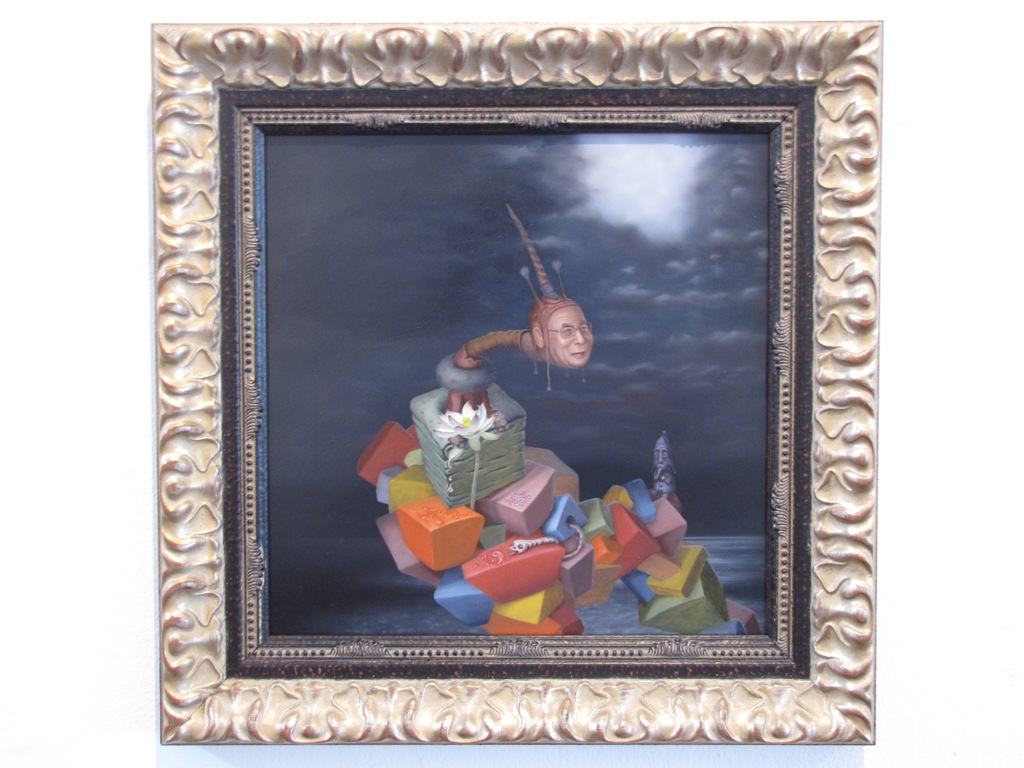 MD: “This one’s titled “Choose Wisely”, I thought of the Buddha looking at the lotus flower and finding life in it, so here we have the Dalai Lama asking this guy, what’s your destiny? You better choose wisely, which path are you going to follow?”

AM: “Gotcha, so here you have represented a Christian cross, an Om and Taoist Yin-Yang.”

MD: “That’s kind of the road I’ve taken, I’m Christian myself but I believe a lot in Zen Buddhism.” 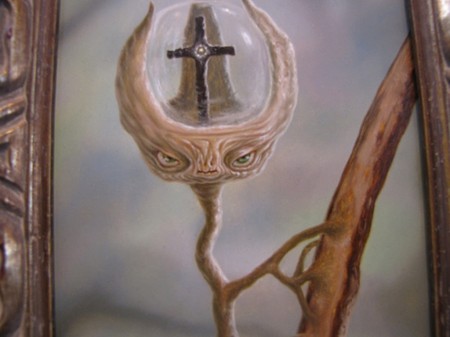 MD: “This one’s “Just Being”, and it’s inspired by The Power of Now by Eckhart Tolle. In it he talks about how in meditation, getting into that zone, beyond ego and mind. Â He calls it “just being”, and here I pictured that coming from the mind.”

AM: “Is “Just Being” similar to Satori?”

MD: “Satori in Zen Buddhism is spiritual awakening, so to some degree they are both enlightenment.” 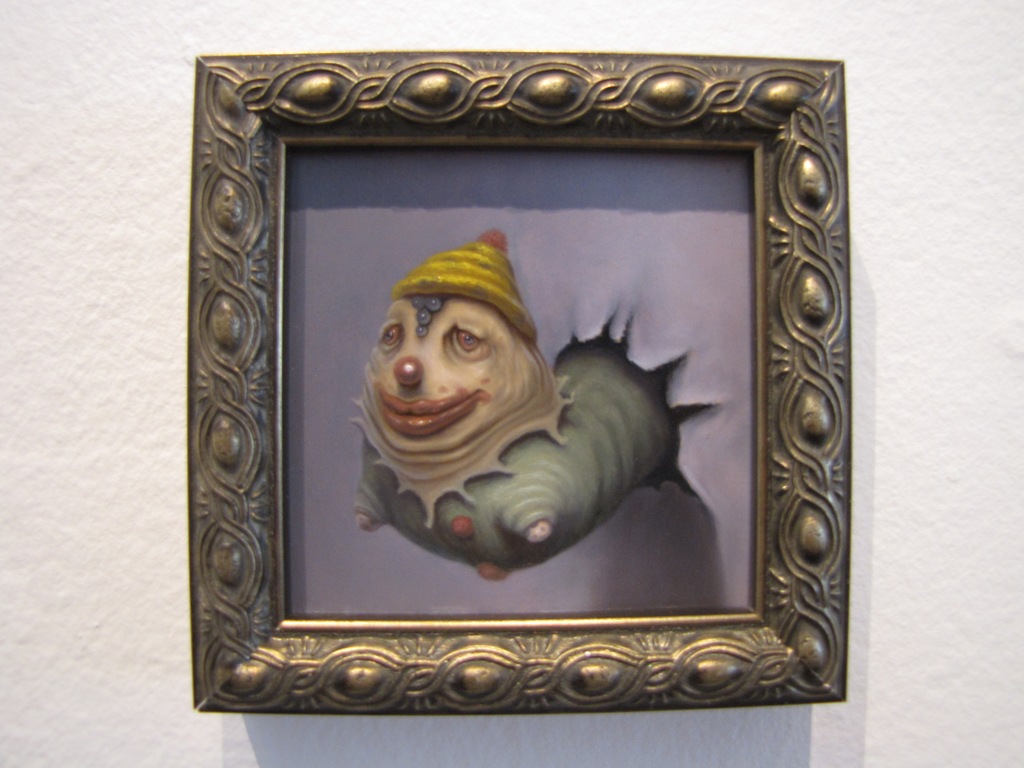 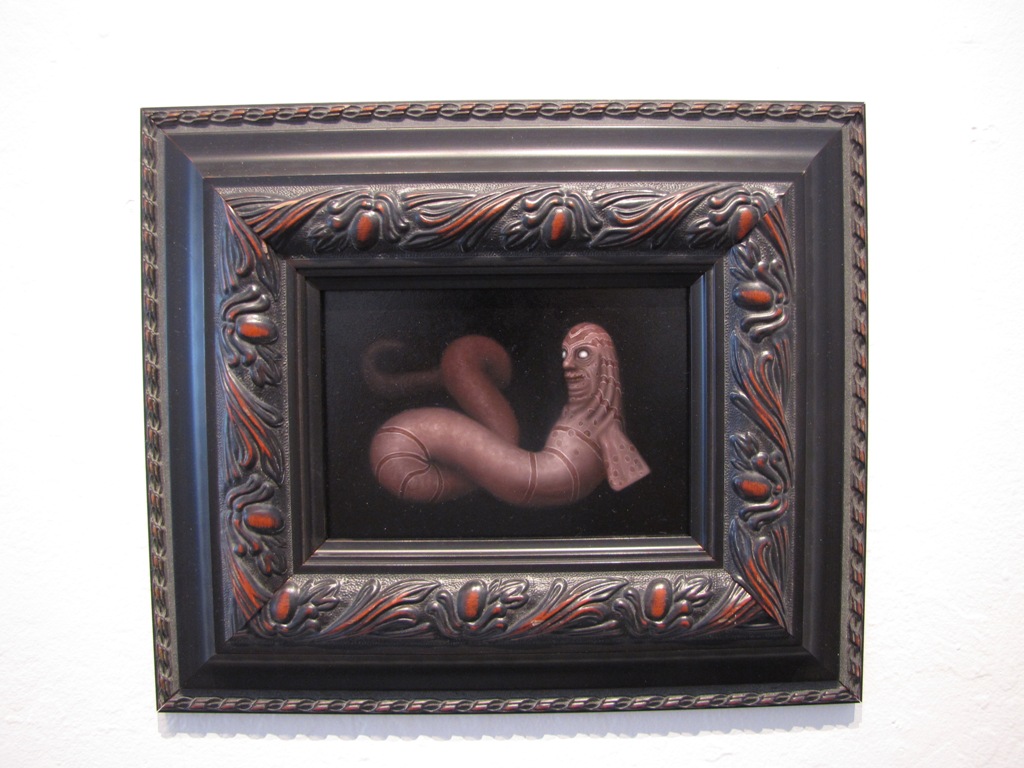 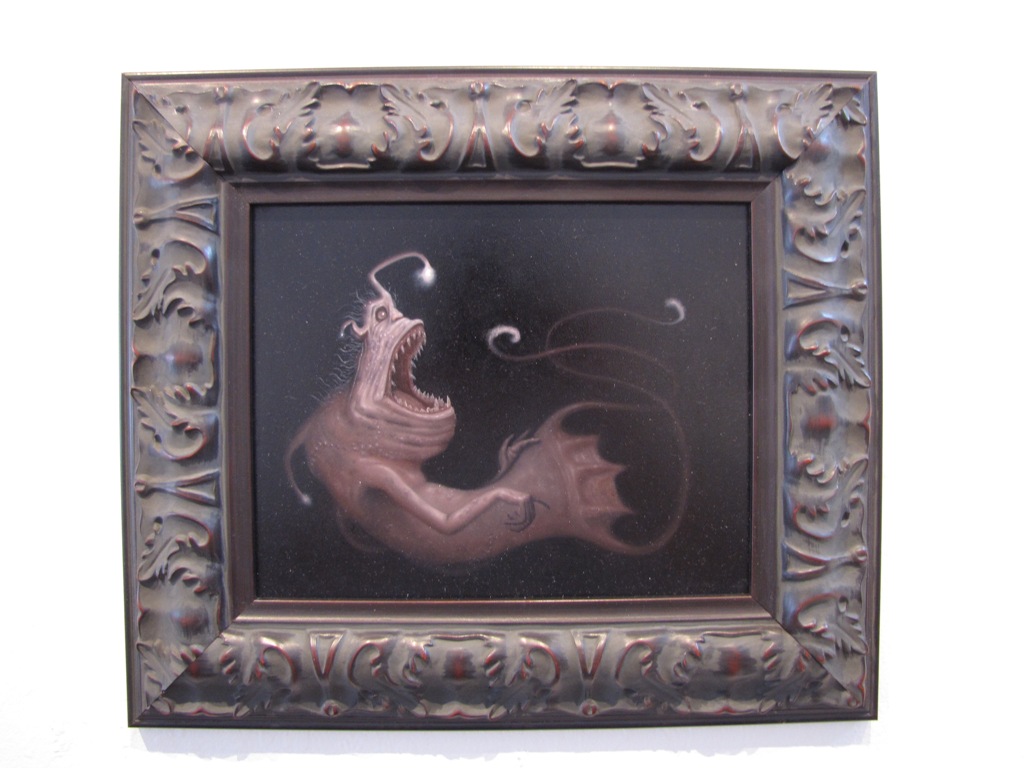 MD: “These two paintings are from my first contribution to a children’s book which comes out in September. Â It’s called The Secret History of Mermaids, its a new series they’re coming out with. Â The first one was on Giants and these are from the second book in the series.”

MD: “Its kind of like a field guide for ancient mermaids. Â The general idea is getting away from the Disney representations, I wanted to make it more meaningful, deeper, darker. Â The first one is the deep sea eel, he story behind it is that when it eats, it opens its mouth like a snake, I put wrinkles around its mouth to show that. Â The second is the Deep Sea Creature, an angler from the Abyssmal Zone.” 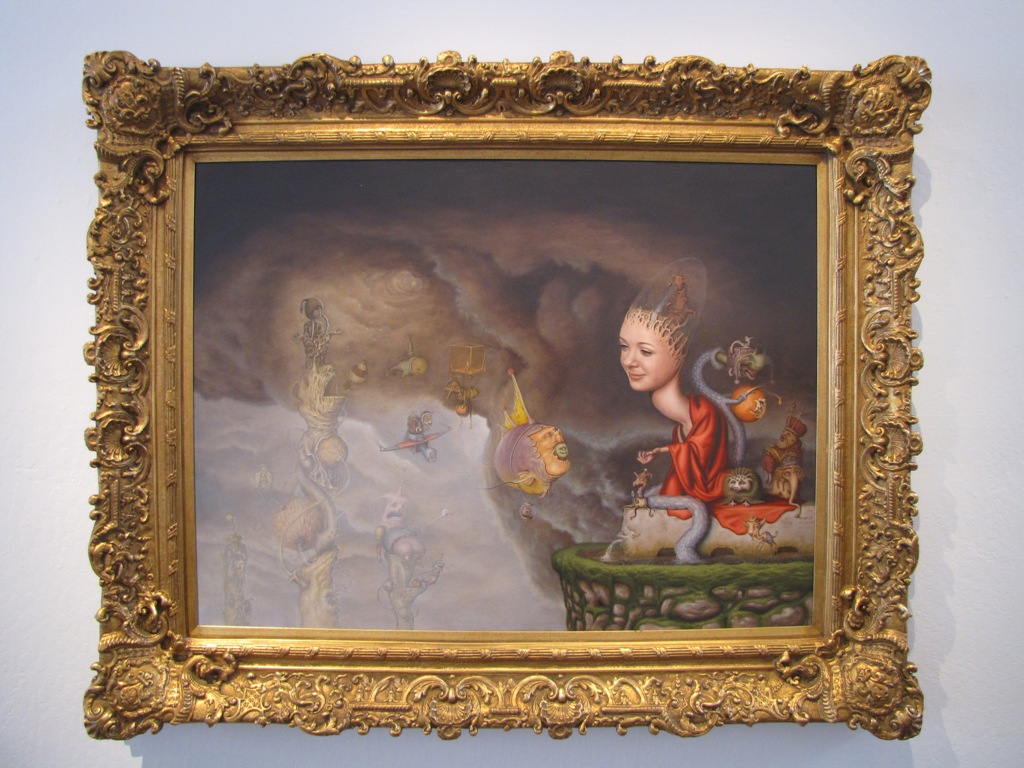 MD: “This one took over 2 months, it’s the biggest painting I’ve ever created. Â It’s the first time I’ve used this glazing technigne, so instead of two or three layers, it’s about twelve or thirteen of translucent colors. Â Scientifically, technically the idea behind that is something the old masters used, in gallery lighting it’ll hit the white of the canvas and bounce back to the user’s eyes. Â The viewers eyes are actually mixing the colors instead of the paint opaquely showing them. Â It makes the colors more vibrant and gives the faces more pop to them.”

AM: “There’s a lot going on in the piece itself, a lot to interpret..”

MD: “I’ve heard all types of interpretations of the piece, but I like what my sister had to say about it. Â You have all these creatures bringing offerings to the Oracle to tell them their destiny, but in reality the Oracle is just a corrupted king. Â It’s a false prophecy while the real way is actually off in the distance.” 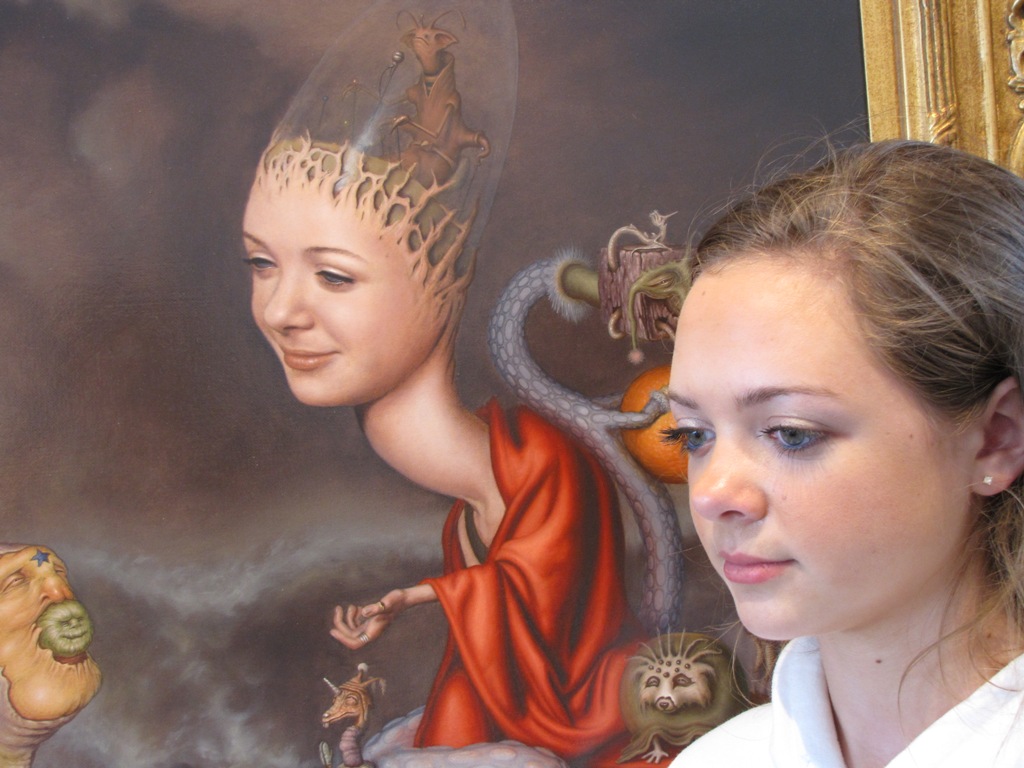 Luckily for us, Matt’s model for the Oracle, Kyllian, happened to be in town for the show!

Searching for Satori runs till June 20th, to view the shows pieces and prices, check out 1988 SF’s Blog.