Cory Arcangel recently had his first auction sale on June 4 at Wright in Chicago.Â  The piece, a 15-minute movie titled “Super Mario Movie“ (part 1 seen above), is a hacked and reprogrammed video game cartridge that follows the game’s hero as he travels through a corrupted game universe and questions his own existence as his world gradually falls apart.Â  Deitch Projects where the video was first shown) director Kathy Grayson refers to it as “the most dynamic piece of new media art in [her] book.”

Arcangel is one of the most exciting digital artists currently working in the new media genre.Â  He subversively uses technology and converges it with pop culture, while questioning ownership and appropriation.Â  Another hacked game piece, “Super Mario Clouds” (below), features a series of wall projections that remove everything in the game while only leaving an intense blue sky crossed by slowed down white clouds, an aesthetic reminiscent of Pop Art’s leading figure Andy Warhol’s floating silver clouds.Â  A still from this work was recently featured on the cover of Art Forum. 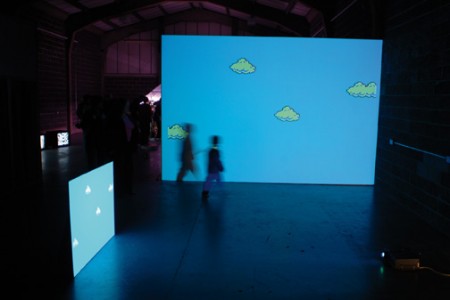 Arcangel definitely has been keeping busy.Â  In 2010, Arcangel is scheduled to be showing at the Museum of Contemporary Art, Miami and the University of Michigan Museum of Art.Â  This year, projects include exhibitions at Montevideo (the Netherlands Media Art Institute, Amsterdam), Kunsthaus Graz (Austria), and the New Museum (New York). He has shown at exhibitions at P.S.1 Contemporary Art Center, the Whitney Biennial in 2004, the Museum of Modern ArtÂ and at The Guggenheim Museum, New York. 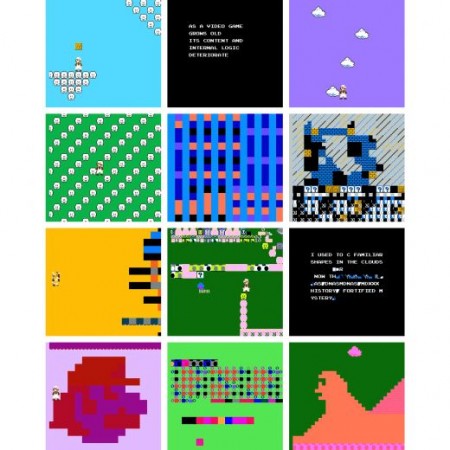