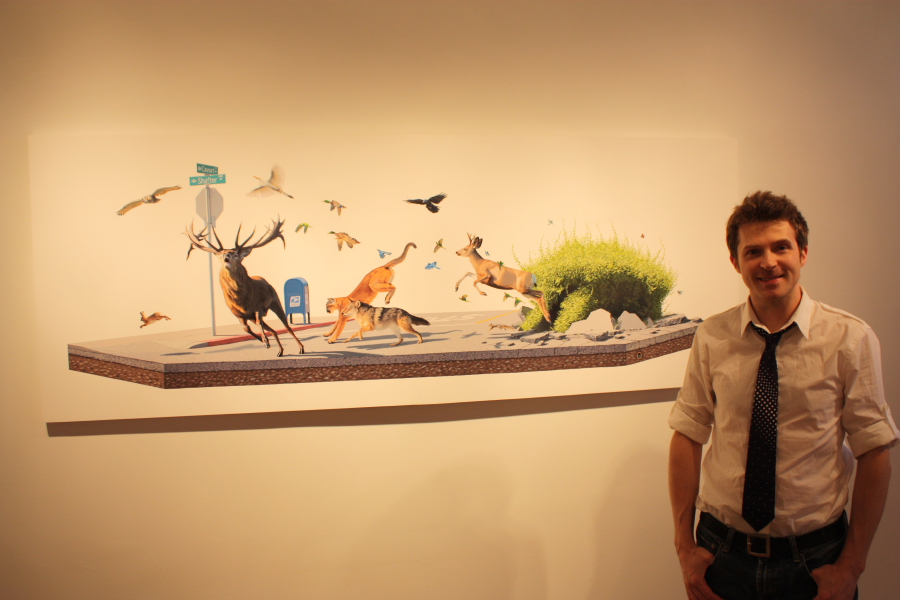 AM made the trip out to Denver this past weekend to check out the much anticipated solo show entitled “Sprout” from one of our favorite artists, Josh Keyes, at the David B. Smith Gallery. It was great to finally see the pieces in person since we only had studio shots up till this point. Josh was also kind enough to sign some show cards for our readers.

Read on for our in-depth look at the show, details of the giveaway and see all the photographs, including some exclusive shots of Josh putting the installation together, after the jump… 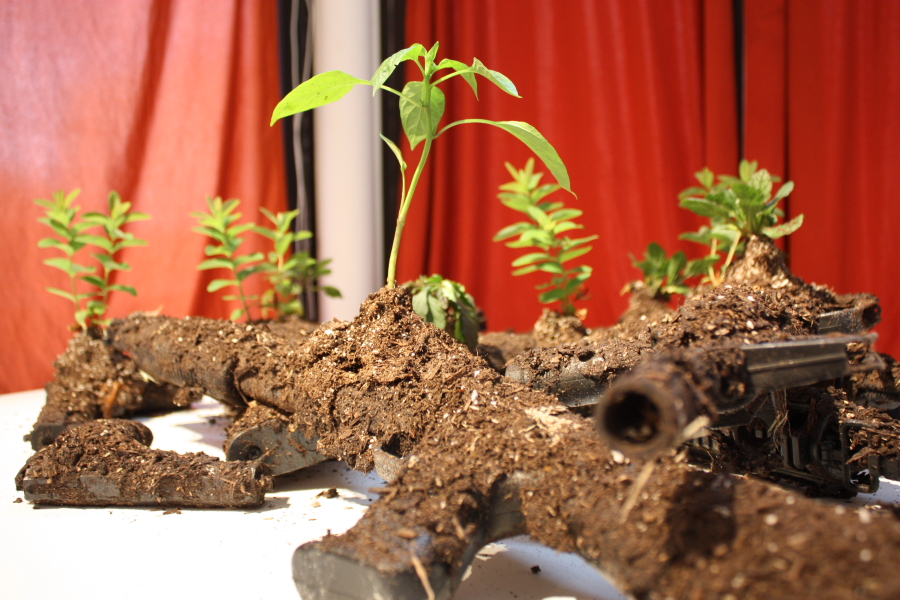 The show consisted of eight of Josh’s trademark white background birch panels, plus two interactive installation pieces. The window podium was given up to an installation featuring a selection of replica guns coated in soil, impregnated with seeds and bursting with plants. This allegory helps establish the theme of the show – perhaps the future human-less world and the remnants of mankind being reclaimed by nature, by way of juxtaposing the symbolism of the gun and the finality it can impose against the concept of re-birth and new growth – “Sprout.” 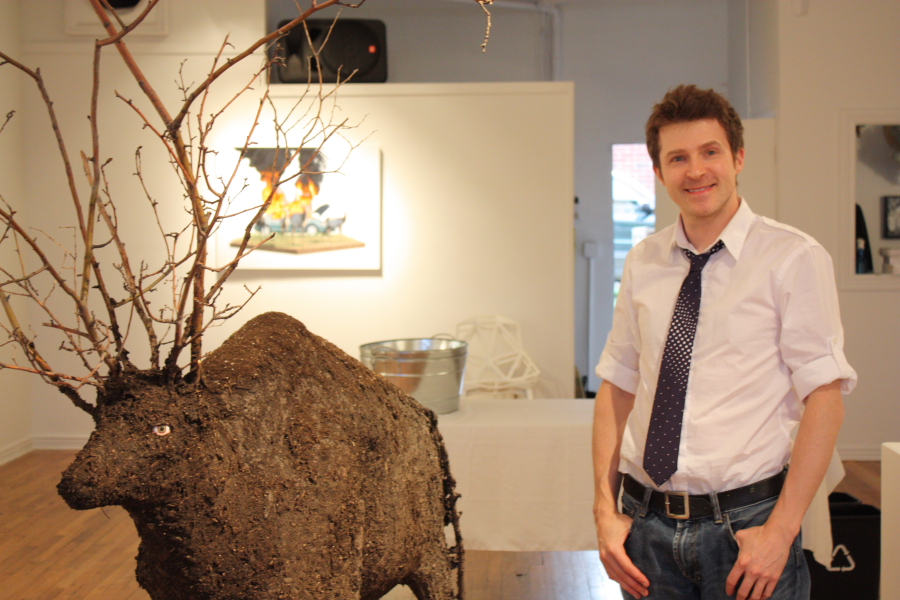 The centerpiece of the exhibition was Josh’s take on a “Boli,” a spiritual sculptural form traditionally made by the Bamana people of Mali. Made to be an interactive part of the exhibition, Keyes’ Boli was again encrusted in an outer skin of soil impregnated with a mixture of seeds. Visitors to the opening were encouraged to participate in the creation of this piece by further placing and setting seeds on the form of the deer. The Boli will then literally sprout and change form for the duration of the exhibit.

Ever keen to interact with fans of his work, Josh invited members of his message board to send in personal items connected to rebirth into the gallery ahead of the show. These items were inserted into the Boli during its construction – a literal time capsule. Other members of his forum were asked to contribute their graffiti tags for inclusion on the monuments within the paintings. 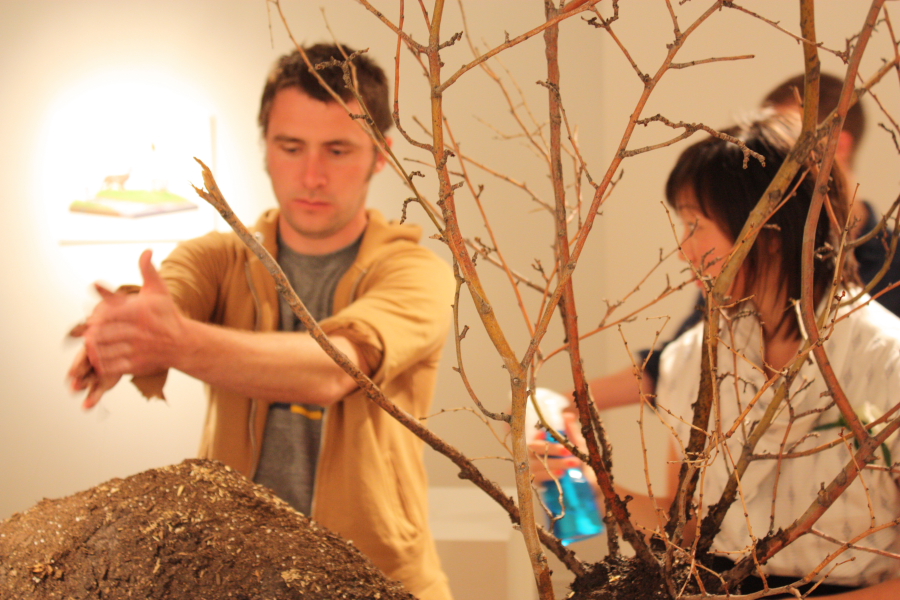 The paintings themselves were a step up in scale for Josh, with the majority being 30×40 inches. The spacing between the paintings allows each piece to breathe and the viewer to take in the splendor of each piece individually. “Burst I” was an absolute stand-out piece in the show, both in terms of scale and content. At 30 x 80 inches, it is the largest piece Keyes has produced since completing his MFA at Yale in 1998 and it took an entire month to finish. The title’s singular number suffix suggests that more paintings will be forthcoming in this series as Josh indicated his desire to go large. We say “supersize me,” Josh! 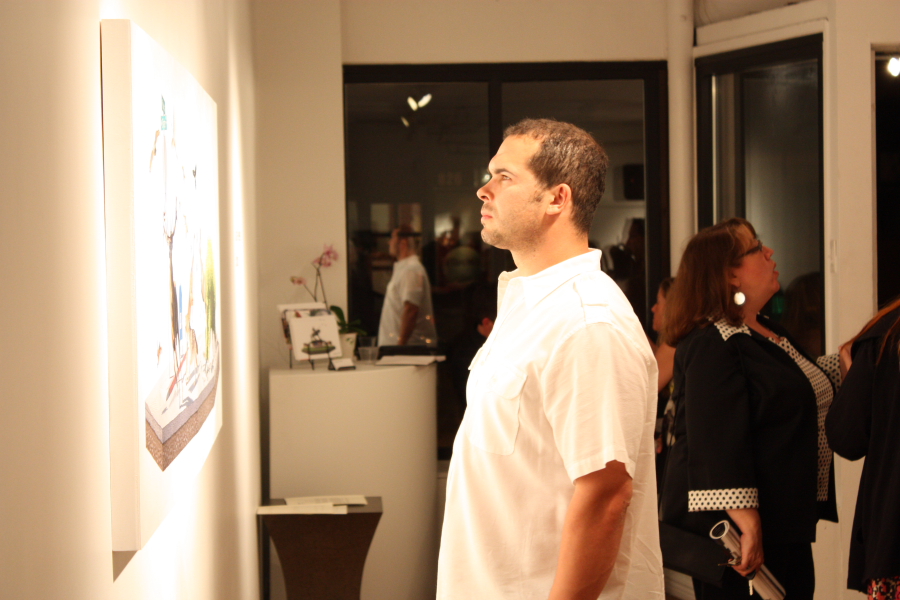 “Burst I” was positioned as the first painting to be viewed upon entering the gallery. The leaf covered structure bursting through the pavement is based upon a tomb in an Oakland cemetery, a structure that has begged Josh to incorporate it into one of his paintings since he first saw it. The animals spring forth from the monolith into the painting as if being granted a release from a period of entrapment, with an urgency that Keyes captures beautifully. As this was the first painting seen in the show, the remaining paintings seem to articulate a dialogue about the fate of the animals since their release. 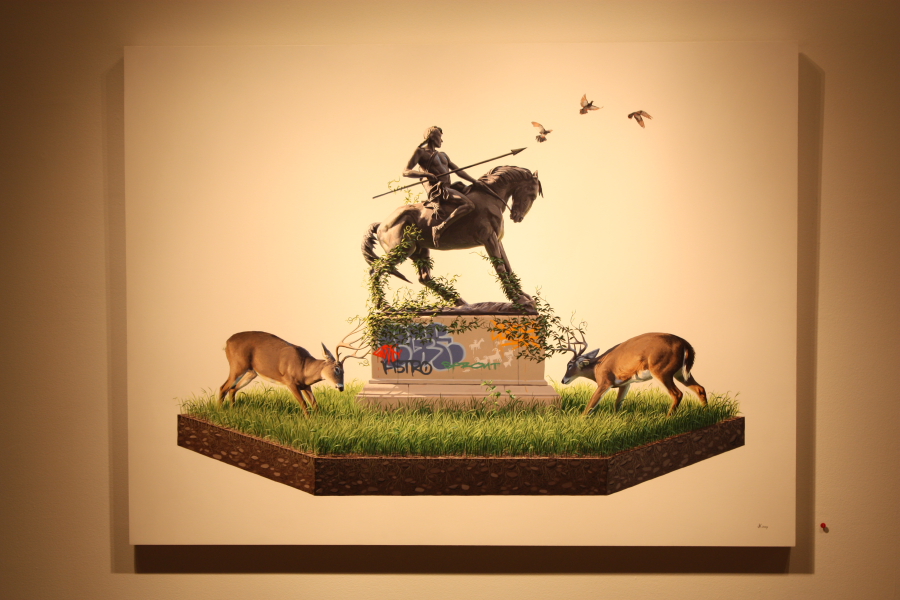 Keyes often incorporates statues and public monuments in his work local to the geographical area he is exhibiting in. In the case of this exhibition, “Entangle I” depicts a bronze statue of a Native American warrior statue entitled “On the War Trail” from Denver’s nearby Civic Center Park. In Keyes’ vision, the base of the statue has been reclaimed first by taggers and now by the two opposing deer, wrapping the monument in vines emanating from their antlers, reclaiming it for nature as the absence of humans renders it now obsolete. 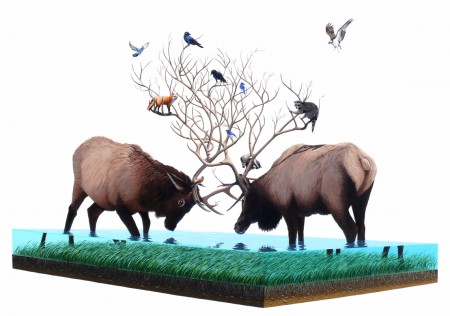 “Rise Above” depicts two elk, who at first glance, seem to be locked in battle with their antlers intertwined. Upon further study of the painting, it becomes apparent that they are not at war with each other, but are working together to provide a place of refuge for other animals sheltering in their branches. Note the size of the animals present and the depth of the water. All of the animals taking shelter would otherwise drown in the flooded landscape. 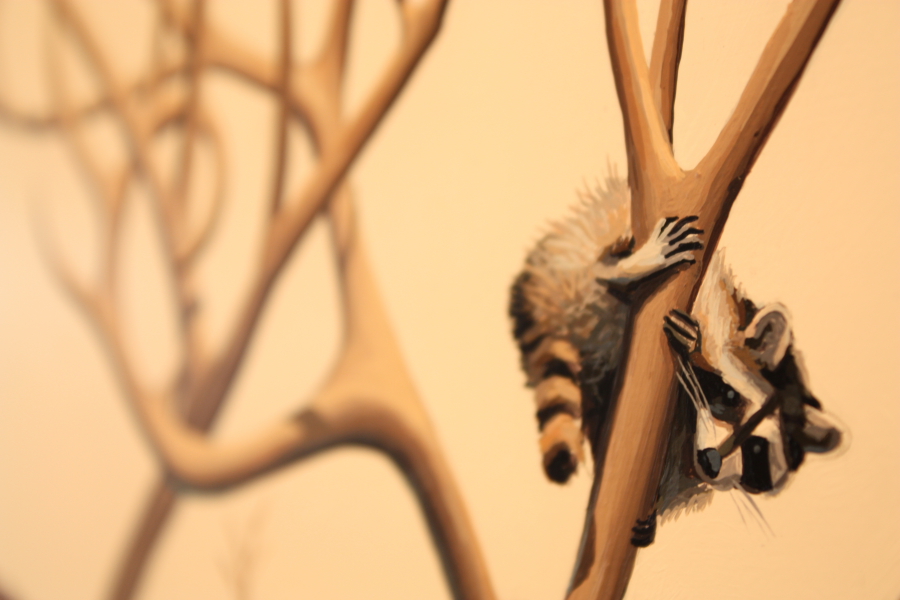 “Scorch II” depicts an almost barren landscape almost devoid of vegetation when compared to the lush green grass represented in the other paintings. The deer hold a menacing stare with the viewer, compelling us not to approach further whilst burning an effigy of the failing American economy – a car whose manufacturer went out of business a few years back… 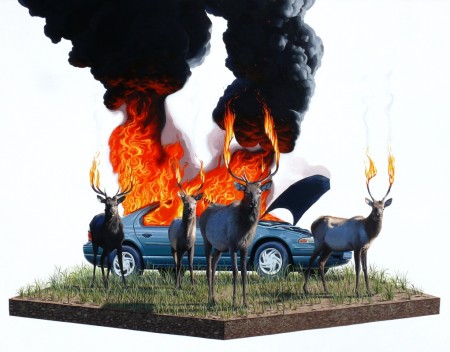 Surely this is Josh’s strongest body of work to date and we urge you to find a way to see this show in person – and maybe sprout a couple of seeds yourself. Print editions of Entangle I and II were on show at the gallery and will be released online during the week of June 8th on the gallery’s website. 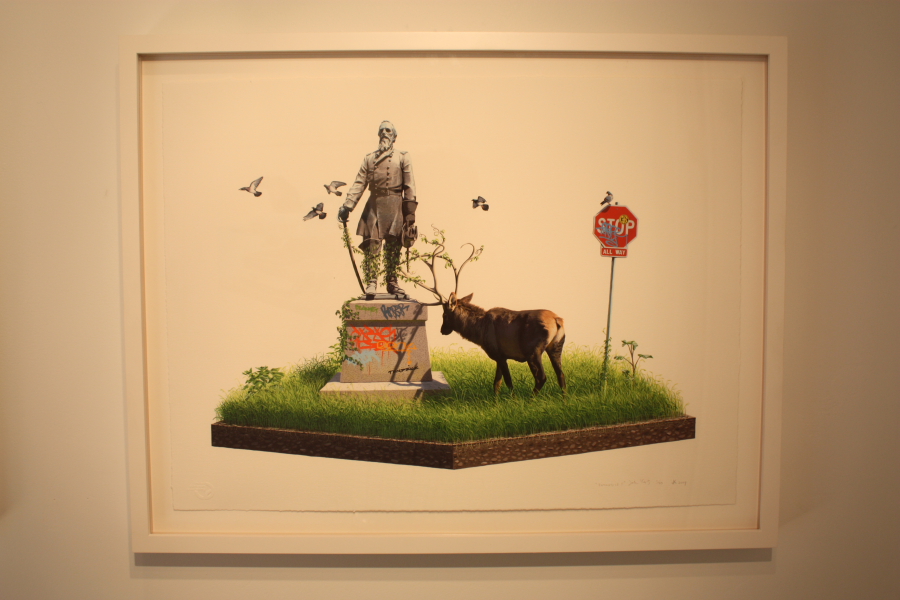 For a chance to win one of the three show cards that Josh kindly signed for us, just post a comment on here before 11:59 pm (BST) Thursday, June 12th. We’ll randomly select three winners. 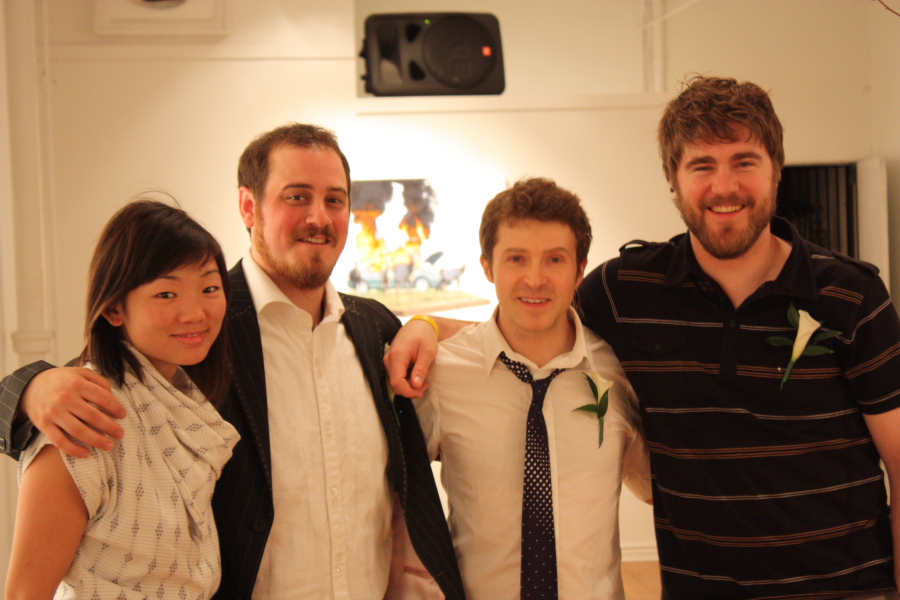