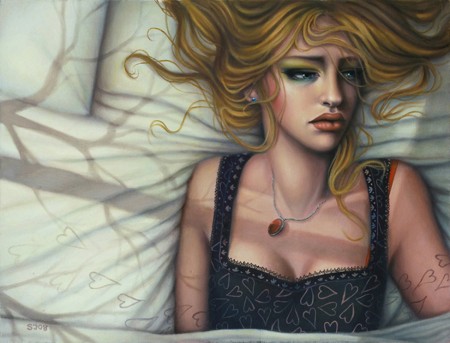 AM is excited about the two shows opening tomorrow, June 12th, at Thinkspace Gallery in Los Angeles, which include “Beneath The Seams” from Sarah Joncas and in the gallery’s project room, Kelly Vivanco’s “The Conservatory.”

We’ve been fans of Sarah’s work ever since she hit the scene a couple of years ago. With a somewhat muted color palette, pieces with dark and moody overtones and her injection of herself in each of her pieces through painting characters resembling her own likeness, Joncas takes a unique approach executing her portraiture pieces.

Joncas explains to Sour Harvest in an interview that with this latest body of work she’s attempting to, “push my portraiture into a more narrative realm, referencing cinema/noir as a way of dramatizing and constructing the pregnant moment. Working with my usual atmospheres of anxiety and melancholy, I wanted to turn vignettes of the private-mundane into spaces more haunted.” Based on what we’ve seen so far, she’s certainly accomplished this and then some.

Read about Kelly Vivanco’s work and get a sneak peek at the pieces from both artists after the jump. 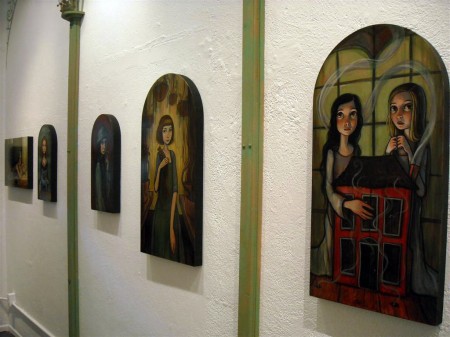 On the other hand, Kelly Vivanco’s portraiture pieces carry a completely different aura. Interacting with the natural environment around them, her characters seem dreamy yet grounded, as though they’re briefly trapped between the make believe world they’ve temporarily transported themselves to, at least until mom calls them back home for dinner. Her work reminds us of the broad imagination we used to have as children and takes us back to a time when life was much more simple.