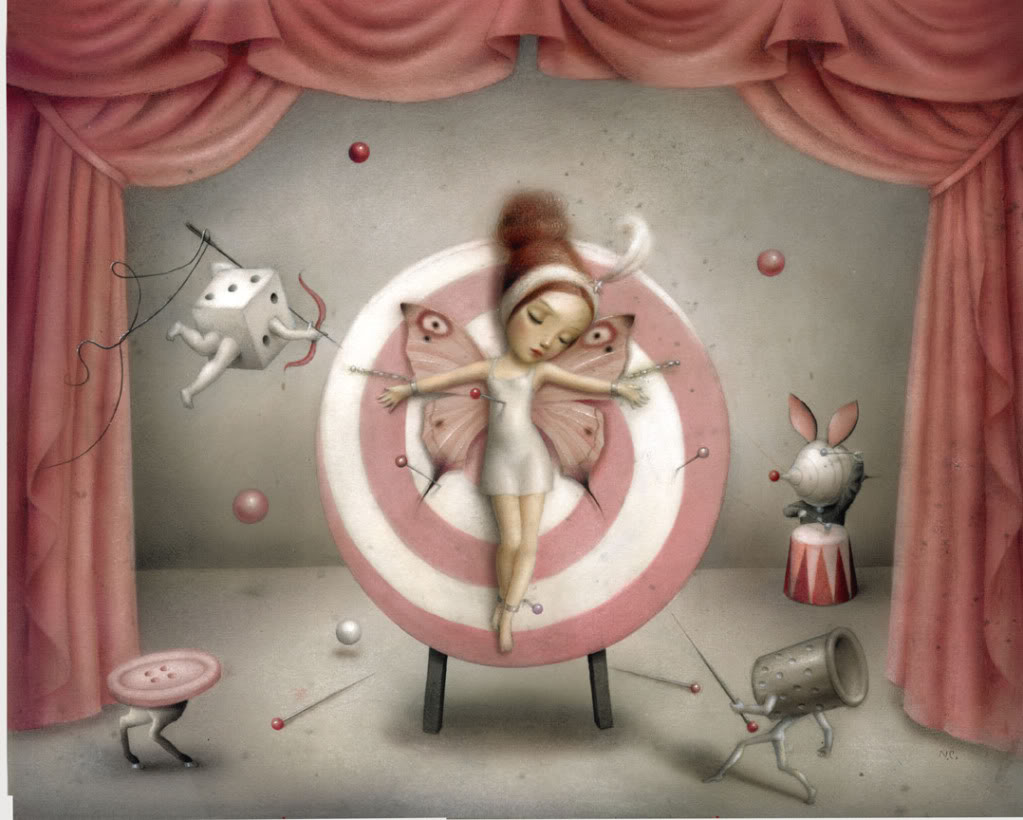 Many openings to recommend this week and if you’ll notice, there is a large chunk of our calendar devoted to SDCC as there are many art-related events at the “nerd prom” in San Diego this week. One of our favorite images though (seen above) is from Nicoletta Ceccoli (interviewed) as she opens her two person show with Eric Fortune (interview to follow soon) this Friday at Roq La Rue.

Take a look at all the recommended openings after the jump…

Thu, July 23rd
Kava Lounge
2812 Kettner Blvd, San Diego 92101
A Rare Basher’s Art Show
Featuring members of the “BASHERS” graffiti crew who were involved with “Go Crush Shit” (GCS) for years. They were the crew who first painted the Pomona store about 14 years ago. The crew was started in the early 90â€™s and many of the members are successful artists today. Artwork exhibited from Jeff Soto, Maxx242, Steven Daily, Craola, Deph, Koed, Japan, Devious, Spine, Steam, Glory, and Menso.
There will also be a Dulok Shaman Live Performance.

Thu, July 23rd, 8:30PM-On
Basic Urban Kitchen + Bar
410 Tenth Ave., San Diego 92101 / 619.531.8869
“Munky Bidness” presented by Munky King and Hi-Fructose featuring live painting and music. Painting live throughout the evening are Attaboy, Buff Monster, Food One, Carlos Ramos and Chris Ryniak. To take things up a notch, Buff Monster and Food One will be painting on lovely ladies as their canvas of choice. Gift bags for the first 50 people!

UK action:
Thu, July 23rd
StolenSpace Gallery
In anticipation of the imminent release of his new book “Shinganist,” Usugrow has rallied the bookâ€™s contributors to action for this show at StolenSpace. Together, these five Japanese artists will be taking over the walls of the Gallery with stunning new works on canvas, paper, wood and felt. â€œShinganistâ€ is an intriguing look into the work of some of Japanâ€™s up-and-coming young artists. Straddling the fine line of street art, skate and tattoo culture, while simultaneously drawing inspiration from centuries of traditional Japanese imagery, True to the meaning behind â€œShinganâ€ – those who create based on visions spurred by the mindâ€™s eye and those who are not affected by the opinions and expectations placed on them by the outside world – USUGROW, MOZYSKEY, TOSHIKAZU NOZAKA, BENE and JUN KANEKO are driven by the pure passion to create.

Fri, July 24th, 7-10PM
London Miles Gallery
212 Kensington Park Rd., London, Notting Hill W11 1NR
Candy Coated Canvas is a themed group exhibition showcasing unique artworks by various established and emerging international talent. All artists have been asked to take inspiration from the title â€œ Candy Coated Canvasâ€ and create a unique art piece which is visually extremely colourful and playful, whilst sparking up memories of childhood, sweets, and fantasy lands. The exhibition aims to showcase a range of artists in a themed environment, to create a highly memorable experience for the viewer, that can visually please and feed their imagination with colour and wild worlds of candy.
(On view through August 24th)