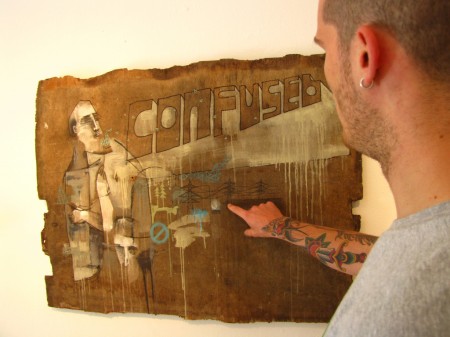 On the eve of Word to Mother’s US debut, AM swung by FIFTY24SF to interview the London-based artist. Â WTM was kind enough to give a walkthrough of his show, breaking down his creative process, inspirations and the histories of some various pieces. Â As an added bonus, WTM signed a few special items for AM readers, more info and a full walk-through after the jump. 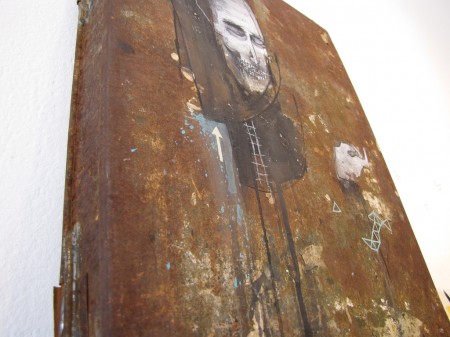 AM: Tell us a little about this piece (seen above).

WTM: So this oneâ€™s called “Come Follow Me.” It’s on a salvaged amunition tin, which I ground the top off it then painted some trim around the edges.Â  I didnâ€™t want to frame any of these pieces because I wanted to keep them a lot rawer, as they are. Sometimes it’s about the depth of the print if theyâ€™re framed. 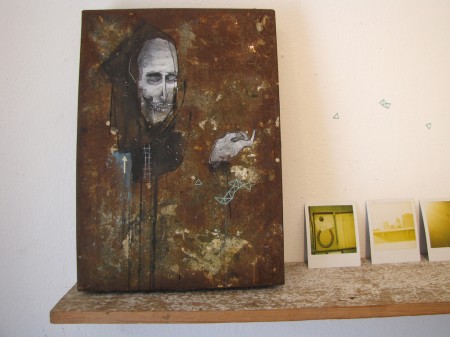 AM: Of course, if itâ€™s a screenprint or canvas thatâ€™s one thing, but capturing the natural detail on a piece like this is obviously important. What sort of paint do you use? 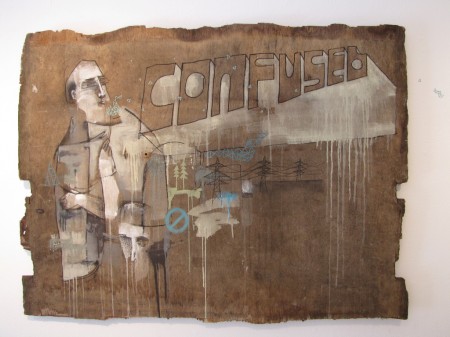 AM: How long does a piece typically take you to create?

WTM: Itâ€™s hard to say really, thereâ€™s the conception of the idea, and the original drawing.Â  They start their lives as sketches.Â  Some of them Iâ€™ll do a little bit and then leave for a couple days and then add some more.Â  Others will take 45 minutes or till they feel like theyâ€™re done.Â  This “Confused” piece here, the pylons and elements of detail took a couple weeks to find it all together, the character came together in two to three hours, just working into the piece till it felt natural.Â

The main task is sorting all the things to paint on. Itâ€™s not like I can go to a store and ask them for salvaged wood, x amount of whatever, itâ€™s about finding it all.Â  So thereâ€™s an added pressure because Iâ€™m never going to be able to find something like that again, if I fuck it up… Â 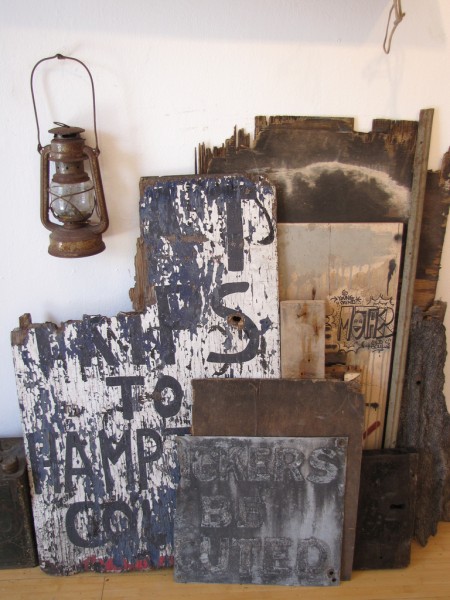 AM:Â  What about this installation here with all the signs.

WTM: Now this sign, on the bottom left, is something that D*Face gave me, itâ€™s from near his old house.Â  The sign says something like “Boat Trips to Hampton Court,” and itâ€™s just incredible, the texture behind it.Â  The sign in the middle, I picked up in East London. It said “Bill Stickers will be Prosecuted,” and this bit of trim on the right is from my hometown.
Â 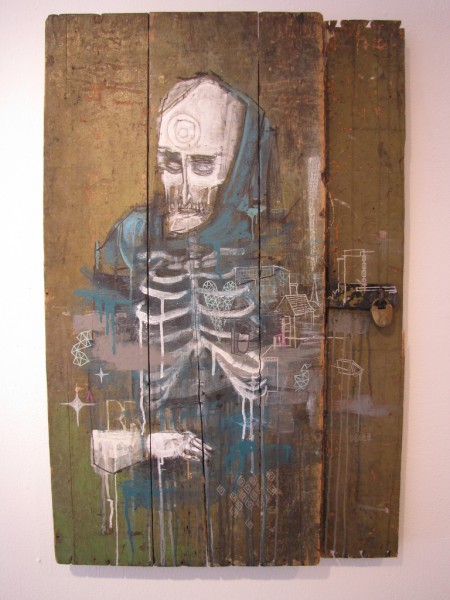 AM: This body of work seems a bit more grim than your last one at Stolen Space earlier this year. Â

WTM: Yeah, many of them are quite somber. Well, theyâ€™re always somber with their eyes closed.Â  Thereâ€™s definitely the introduction of “Death” in this show.Â

This piece (above) is slightly darker, the skulls representing death.Â  I wouldnâ€™t say my work is an overtly political statement or anything like that. Itâ€™s more about how I relate to things, spirituality and all that.

AM: The astronauts we saw at your Stolen Space show donâ€™t seem to have made an appearance this time around.

WTM: Yeah, I was listening to a lot of Lord Quas and shit, getting into my own world.Â  What that was about was retaining that childhood essence.Â  It was a metaphor for loving something without any sort of monetary gain.Â  That theme comes out in this piece here, with the dandelions.Â  An action you do without any sort of gain, just for fun, make a wish.Â  Itâ€™s something so simple, something I want to capture.Â  And then, thereâ€™s the East End architecture, my surroundings, I wanted to document this time in my life, the razor wire..

AM: Has moving to London changed the shape of your work?Â  The discarded objects you find in the street in London must be different from the objects youâ€™d find on the shore.

WTM: Absolutely, itâ€™s forced me to adapt, but itâ€™s been good, itâ€™s been interesting, itâ€™s all been positive, the progressions Iâ€™ve made in my work, the relationships with people, being able to travel.Â  It was good back in Hastings, but I could only go so far, itâ€™s a small town.Â  Thereâ€™s some good stuff in London, you just have to find it. Â 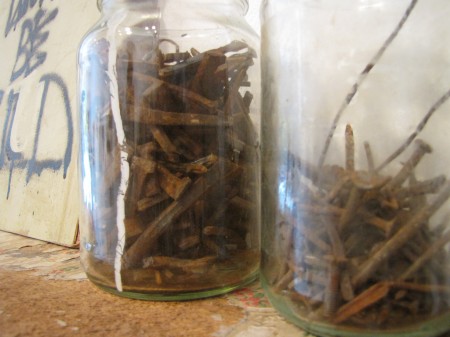 AM: Tell us a bit about some of the knick-knacks comprising your installations.
Â
WTM: I found these wooden joists, supporting beams from old houses.Â  There was a house clearing, and they were throwing them all away.Â  I pulled all these nails out.Â  I wanted to keep them because of the color, itâ€™s just fantastic.Â  I thought it was really important with this show to have a lot of fun, I didnâ€™t want it to be a sterile show, wanted to be a bit more free.Â  Something Iâ€™d like to come see. 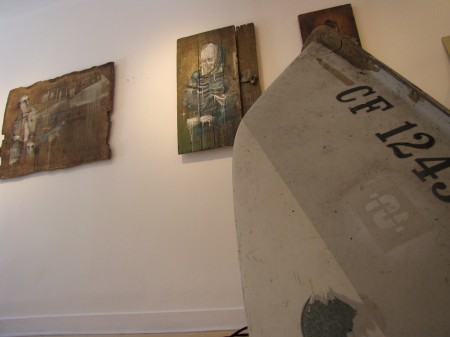 And, we found this part of a boat, we were down at the Upper Playground warehouse and Luke saw it out the window, so we just stopped and it was perfect. 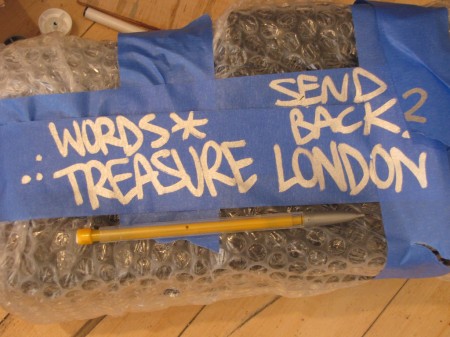 AM: Have you found any good salvage here in San Francisco?

WTM: Yeah, we â€œfoundâ€ some things last night. Iâ€™ve wrapped them up, but theyâ€™re these little mail boxes, fucking incredible.Â  We took a bunch off, theyâ€™re stunning with the rust and numbers. Â  Â 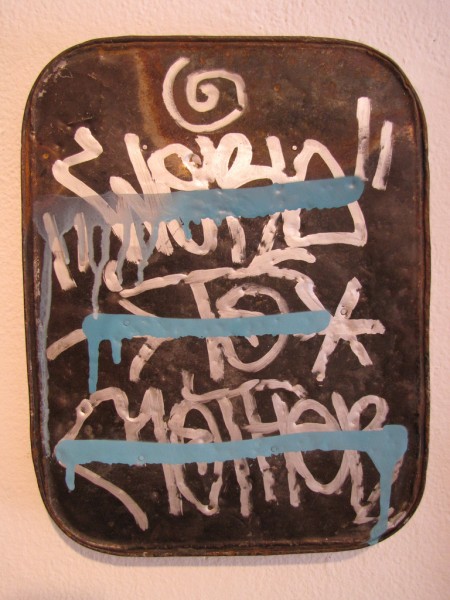 AM: Will your San Francisco experience influence what eventually goes on these new canvases?

WTM: I want to use SF architecture in these piece, I love the colors used on the buildings. Â Iâ€™d like to incorporate these things somewhere in my new pieces.Â  Itâ€™s a definite huge influence, whenever I travel, you meet new people and it grounds you again, gives you a fresh outlook.Â  Sometimes, I need a time out from London. Â  Â 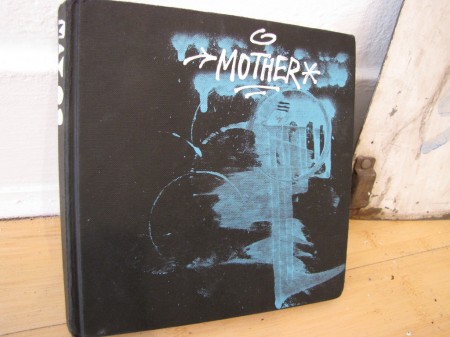 WTM: Im just drawing constantly, always carry a notebook.Â  Thereâ€™s always observational stuff in life to keep it fresh, Iâ€™m not sure if any of these sketches are used directly in this show, but what Iâ€™ll do is go through this and go through it and use it in future shows.Â  Put it all together. Â 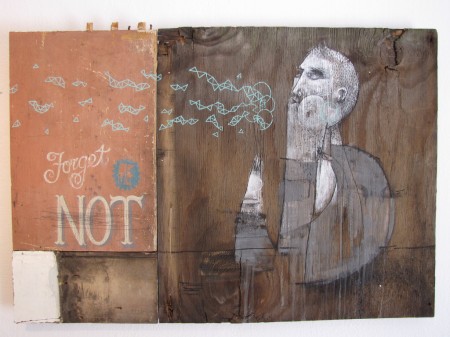 AM: There have been quite a few comparisons to you and Anthony Lister, how do you feel about that?

WTM: I think thatâ€™s quite a compliment, heâ€™s incredible.Â  D*Face, Connor Harrington, Chloe Early are all people that are around, people Iâ€™ll bounce ideas off of.Â  In terms of painters, I love Art Nouveau, Mercer, Klimpt, obviously Basquiat, Os Gemeos, Barry McGee, Anthony Lister, all these people.Â  Iâ€™m a fan of art in general, Iâ€™m just trying to throw something out there, not in a way that hasnâ€™t been done before, but rather in my own way. Â 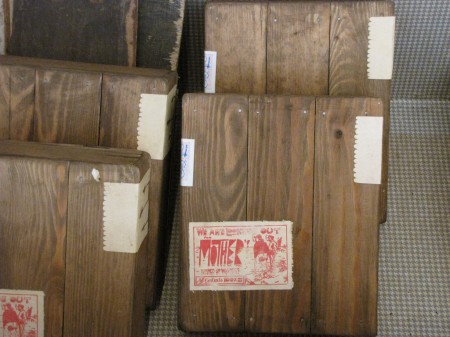 As an added bonus to US collectors, WTM brought five of the handmade boxesÂ he made for his recent Stolen Space show, included inside is some art, a hand-bound notebook and various other tchotchkes. Â To purchase one of these at a special price, contact Lynzy at FIFTY24SF.

Additionally, for those of you unable to check out the show in person, WTM took some polaroids of the installation elements and has signed them for some lucky AM readers out there. Â The firstÂ 4 readers to leave a comment will receive one of these unique pics.Â Â 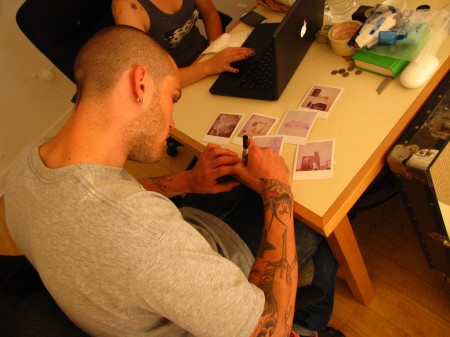