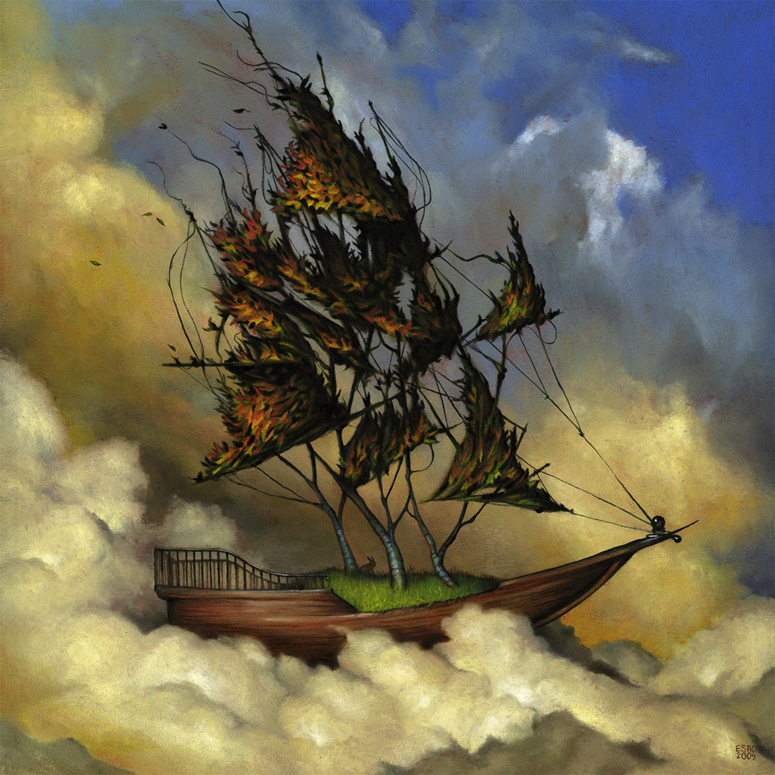 It’s been a while since Esao Andrews has had a major show and for his many fans, it’s long overdue. Since his showing with Roq La Rue last May, he’s been relatively off the grid – most likely getting ready for this year’s show “Farewell Avery” at Thinkspace, opening TONIGHT. It seems like it has been time well spent because this new body of work took our breath away. Even though we teased you with a peak at “The Conjoined Bell”, we had no idea what lurked inside that fantastic imagination of his. 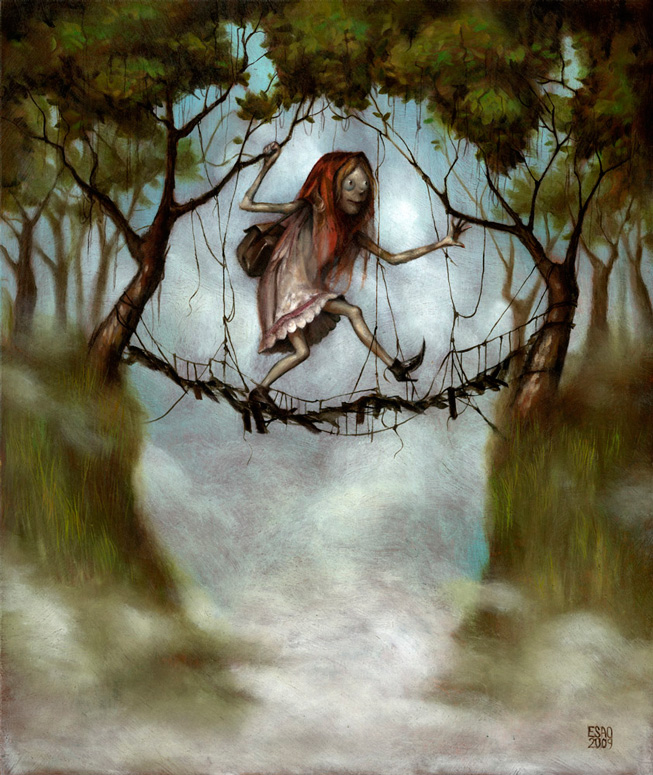 Arrested Motion (AM): Can you tell us a little bit about your new body of work for “Farewell Avery”?

Esao Andrews (EA): Even though I like to have any group of paintings not be related to one another, there’s a transient feeling with a majority of them. Portraits taken while traveling somewhere. The title comes from the accidental muse from some misinterpreted lyrics of the song “Pitseleh” by Elliott Smith. For the longest time I thought he was singing “i’m sorry Avery, I don’t think it’ll ever pass…” I often wondered who she was and the years of budding romantic inspiration came to a close after finding out the real words : “i’m so Angry, I don’t think it will ever pass…” 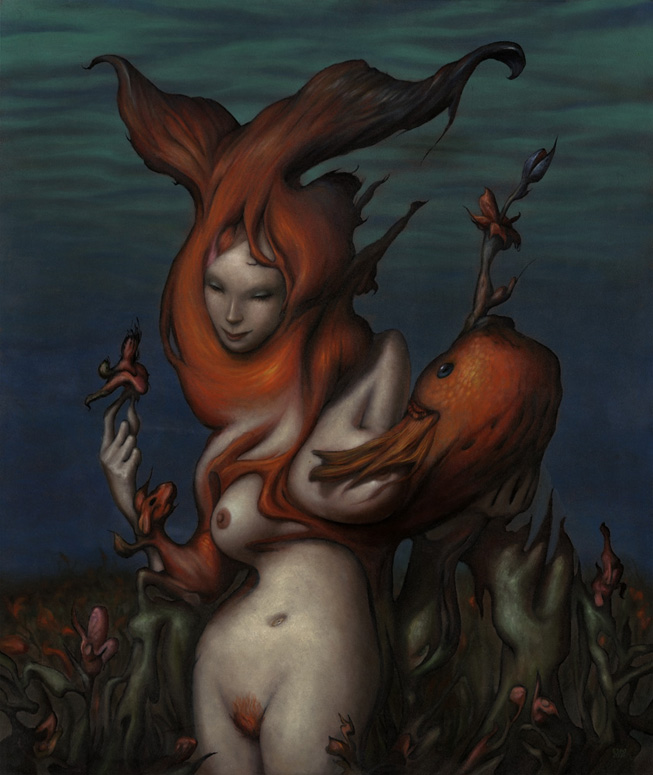 AM: What’s your earliest memory involving art or creating art?

EA: I remember drawing a jeep with fabric crayons and having my kindergarten teacher iron it on a cloth scroll.

AM: If you had an unlimited budget and time was not an issue, what grand artistic vision would you look to bring to life?

EA: To design a massive labyrinth with moated areas for boats, puzzles and traps would be wonderful. I’d like to do an animated movie someday too.

AM: Do you listen to music while painting/drawing? If so, do you have a current favorite that inspires?

EA: For a long time I’d listen to a CD on repeat, then NPR, then I moved to audiobooks, then documentaries, then for a bit I was watching action movies while painting. A chunk of the “Farewell Avery” group were painted while watching Battlestar Galactica in its entirety. Now its back to music, currently a lot of Mark Kozelek. 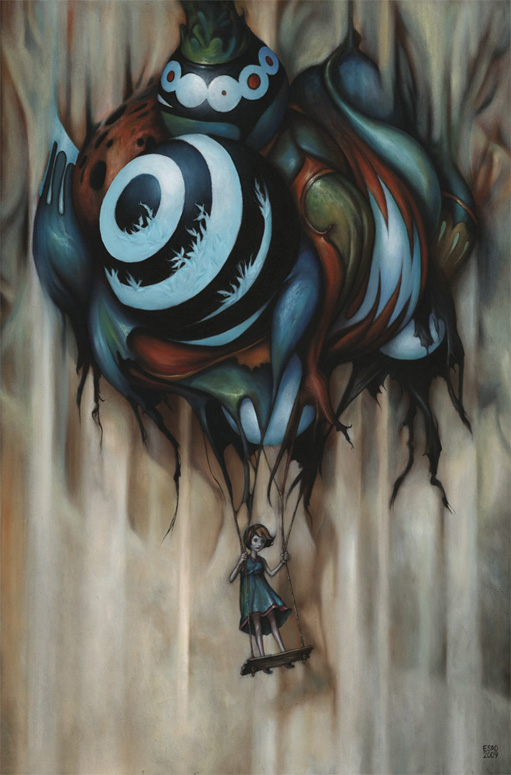 AM: If you could stand by and watch the creation of any piece of artwork from over the years, which would it be and why?

EA: The Moai on Easter Island if that counts. It’d also be watching their own destruction too. It’d be interesting to see how they stacked and moved them.

AM: What do you consider your biggest overall influence?

EA: Hayao Miyazaki has had a huge influence on me. I was obsessed with Princess Nausicaa as a kid. James Jean got me more focused in on oil painting.

AM: Do you have plans while in LA to get out and visit any galleries or anywhere else if time permits?

EA: Gonna be there for a few days and haven’t planned anything. I’m open for suggestions? 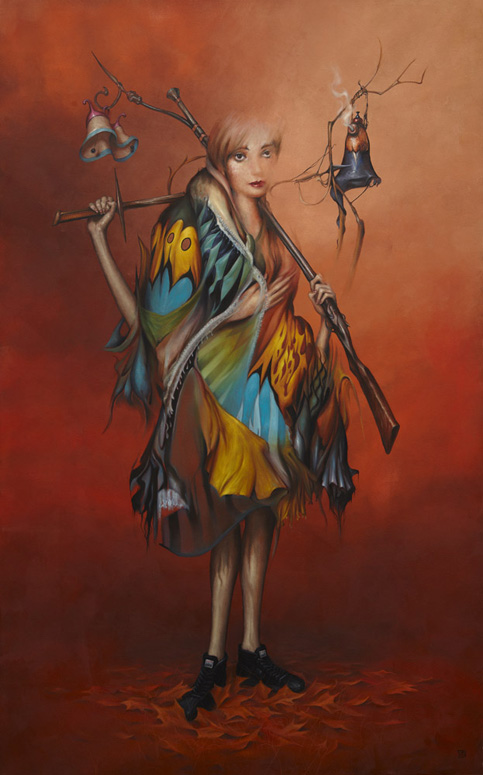 AM: We do publish a weekly highlights and recommended showings list 🙂 Any shows or projects you have coming up that you can share with us?

EA: I’m going to be with Alex Gross at Jonathan Levine Gallery at the end of 2010.

AM: Thanks for your time Esao and good luck with the show.