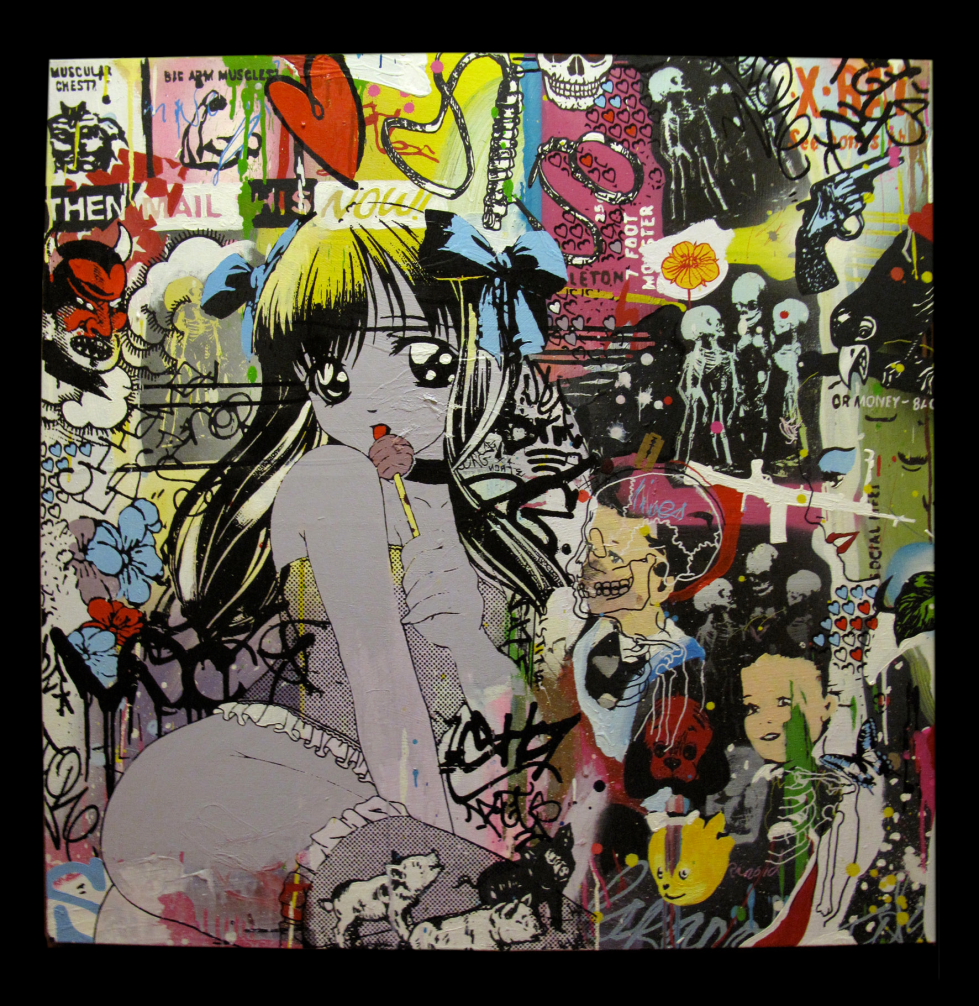 Our friends at Zero Cool gallery will be opening a new group show entitled “Don’t believe the Type” tonight in London that will feature four large scale collaboration paintings by Hush (interviewed) and Dan Baldwin (interviewed). The artists have not worked together in the past, but when AM heard that they would be pooling talents, we thought that this could be something special.

Each started work on two pieces and when they finished their elements, the paintings were traded over for the other’s work. You can see the finished results of two of the paintings, some progress shots from each artist, and a dual artist interview after the jump. 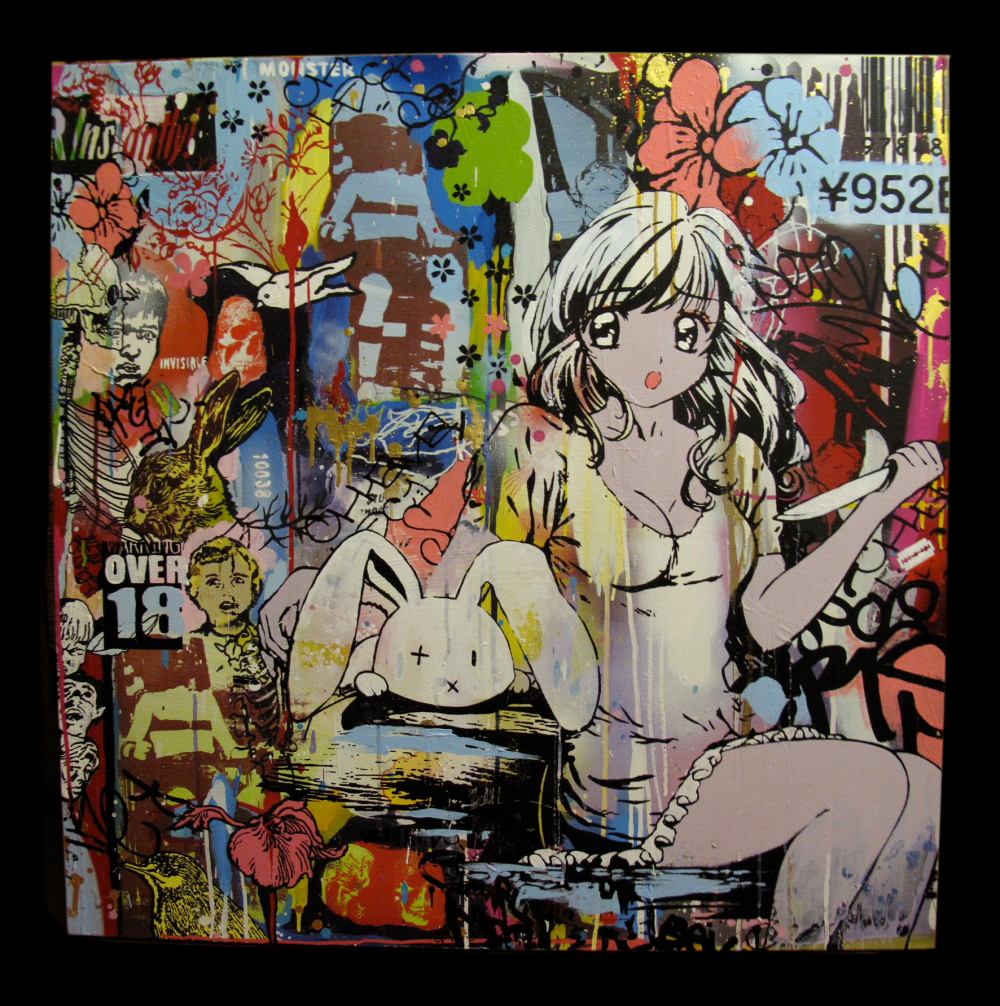 AM: Could you tell us a little something about your work and your background?

Dan: MY WORK IS ALL ABOUT LIFE – THE FINE LINE BETWEEN GOOD VS. BAD, DECAY VS. INNOCENCE, WAR VS. RELIGION, ETC – IT’S LIKE A SONG – ALL WORKING HARMONIOUS TOGETHER TO CREATE A RICH TAPESTRY OF CONTRADICTIONS AND ELEMENTS.

WENT TO ART SCHOOL IN 1990, FIVE YEARS DOING WELL IN COMMUNICATION MEDIA AND ILLUSTRATION – STAYED ON A YEAR AFTER GRADUATION TO TEACH, LEFT TO BRIGHTON IN 96 GOT BIG STUDIO, DEVELOPMENT FOR TEN GOOD YEARS – FIRST STARTED GETTING ATTENTION 2003 IN LONDON SHOWS, THEN BUILT IT UP TO NOW – KEPT DEVELOPING MY LANGUAGE. BORN MANCHESTER 1972 – LEFT WHEN AGED 9 DOWN SOUTH – SKATED 8 YEARS – DID PLUMBING APPRENTICESHIP UNTIL I SAW THE LIGHT.

Hush: I paint pictures and my backgrounds are colourful and sometimes textured 🙂 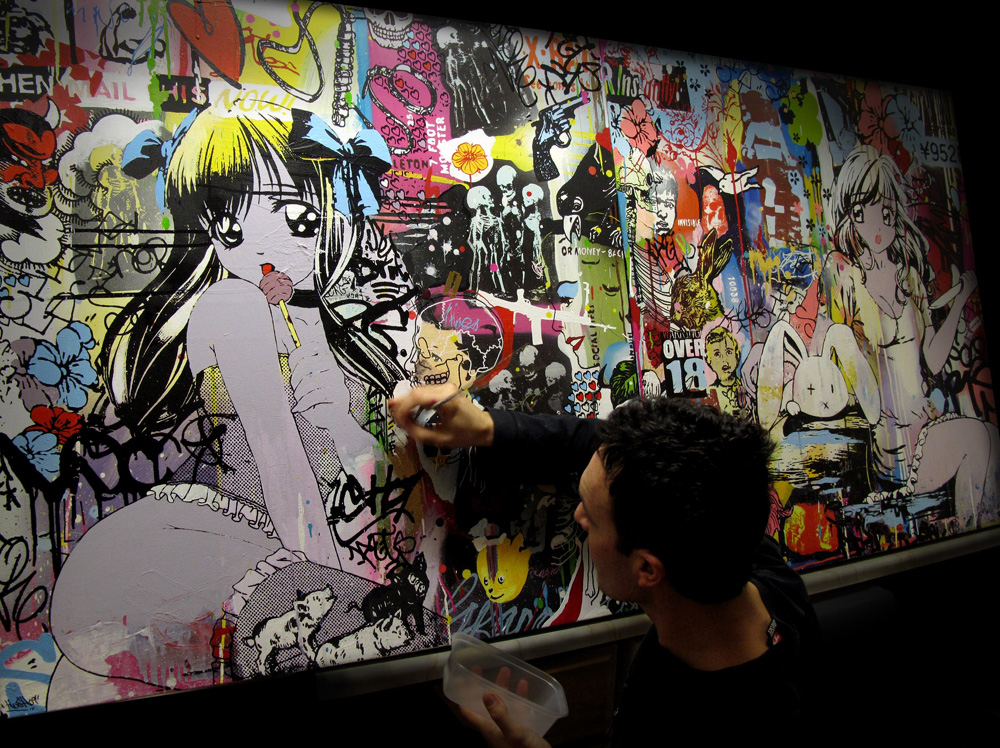 AM: Your work is often seen a quite provocative, is this an intentional move on your behalf?

Dan: YES – PEOPLE NEED PROVOKING – BUT ALSO I WANT THE WORK TO BE BEAUTIFUL. REALLY OFTEN, PEOPLE THINK MY WORK TO BE ANARCHIC AND AGGRESSIVE BUT IT ISN’T AT ALL. IT’S VERY CONTROLLED AND DELICATE. I LIKE TO PUSH MY WORK MORE AND MORE THOUGH SO YOU GET A REAL MIND FUCK OF A PIECE WITH SO MANY LINKS AND DEPTH THAT PEOPLE WILL EITHER LOVE IT AND NOT BE ABLE TO TAKE THEIR EYES OFF IT OR THEIR HEAD WILL BLOW UP. SOMETIMES, PEOPLE JUST DON’T GET IT. THEY SAY THINGS LIKE – WHY “ARE THERE BULLETS ON THAT PIECE?” “WHAT TYPE OF GUN IS THAT?!” I SAY FORGET THAT. LOOK BEYOND THE OBVIOUS AND GET INTO THE LANGUAGE. THERE’S A LOT OF DOUBLE MEANINGS.

I’M REALLY HUNG OVER NOW SO IF I GO OFF INTO A TANGENT IT’S CAUSE OF THAT AND I’M A SAGITTARIUS AND WE ARE RENOWNED FOR IT. I SEE IT LIKE A SONG, LAYERED UNTIL THE BALANCE IS RIGHT.

Hush: Not really. In fact, I try and make it not too provocative; the intention is more one of suggestion. The Manga style girls are used in an exaggerated contemporary portrayal of the female form, simplifying the shape to its bare minimum. It has always been my intention to portray the figures as beautiful and innocent (oblivious to their power). 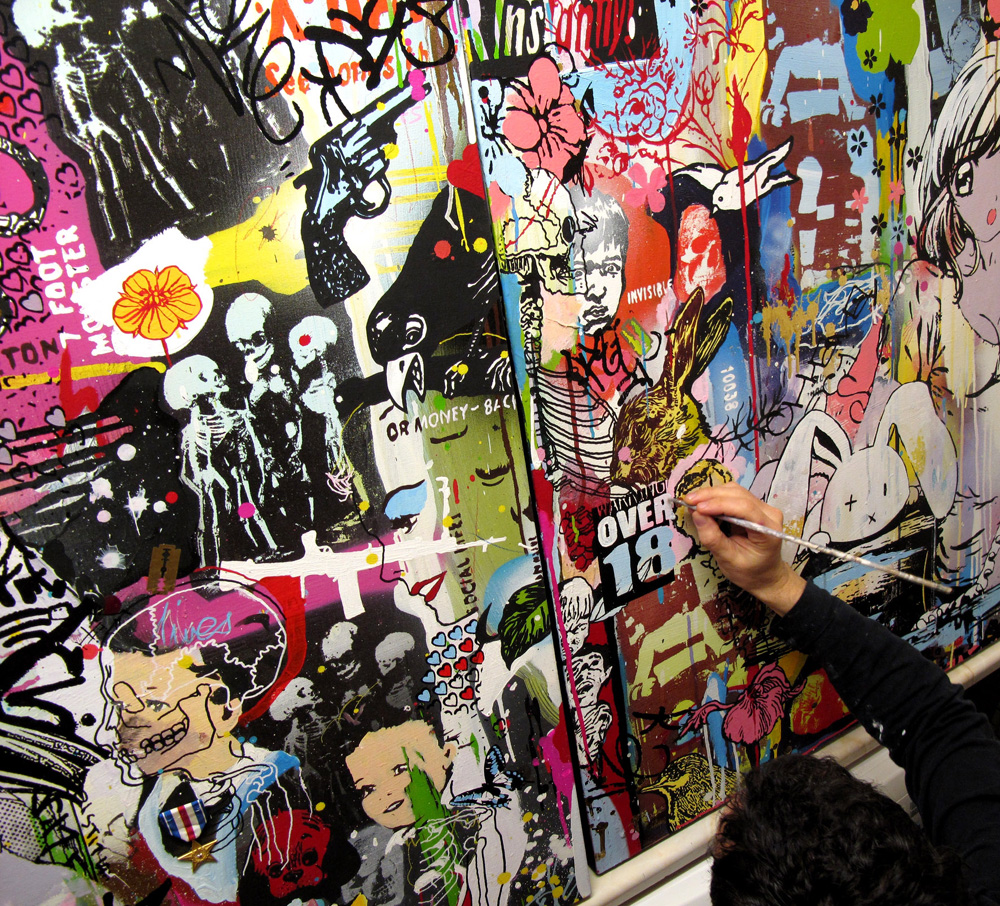 AM: What was the defining moment of you career as an artist?

Dan: GOING FULL-TIME, SEEING MY WORK IN THE WINDOWS OF SELFRIDGES WAS FUN – SELLING A PIECE FOR OVER £25,000, HAVING A SELL OUT SHOW, SEEING MY NAME NEXT TO BASQUIAT’S, SEEING IT IN WEST HOLLYWOOD WAS NICE. ENABLING MY GIRLFRIEND TO GIVE UP HER JOB, BUYING A HOUSE – GETTING RECOGNITION.

Hush: I hope that moment hasn’t been yet. Every new project is a step forward and I just enjoy every moment that I’m allowed to make art. 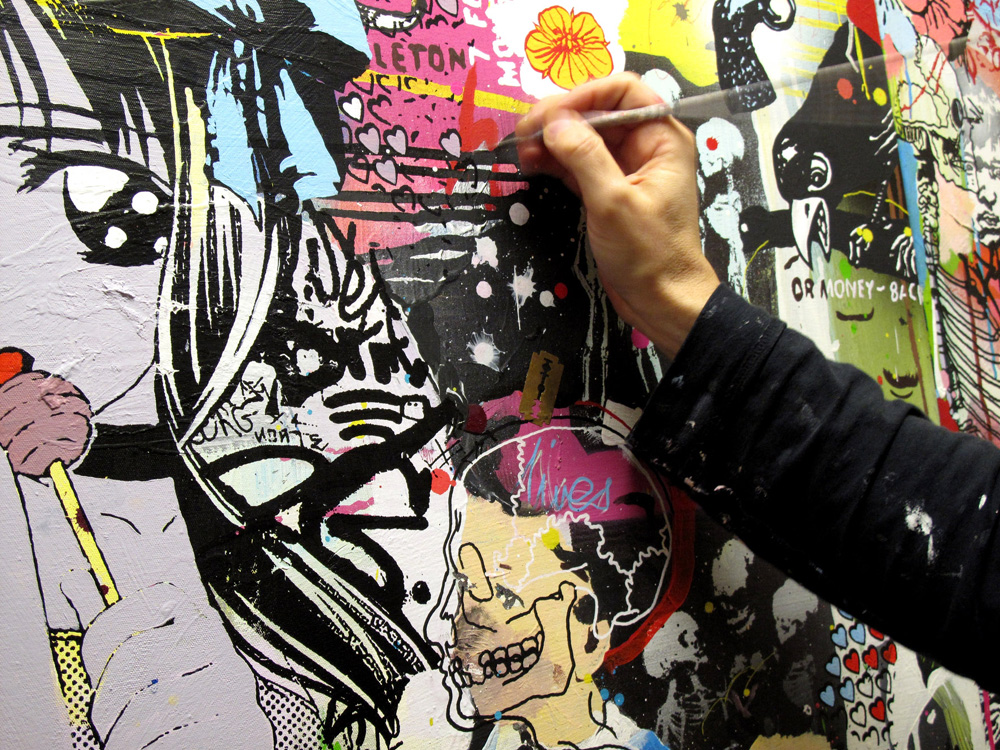 AM: Which of you peers do you admire most and why?

Dan: I RESPECT SOME OF THE URBAN ARTISTS FOR THEIR SKILLS AND COLLECT SOME – I MET SHEP IN HOLLYWOOD AND WENT TO HIS STUDIO; THAT WAS A REAL HONOUR. HE WAS REALLY GENEROUS, I’VE JUST MADE HIM A PAINTING.

MY INFLUENCES ARE PEOPLE LIKE ROBERT RAUCHENBERG, WARHOL, BASQUIAT, HOCKNEY, PETER BLAKE, – I LIKE HIRST, JEFF KOONS, TAKASHI, H BOSCH, FRANCIS BACON – I HAVEN’T MET HUSH YET, BUT COULD TELL THIS WOULD WORK – I CAN TELL HE IS HARD WORKING AND I AM TOO – SO THIS WAS A PROJECT ALL ABOUT RESPECT & TRUST & LETTING GO OF BEING PROTECTIVE. 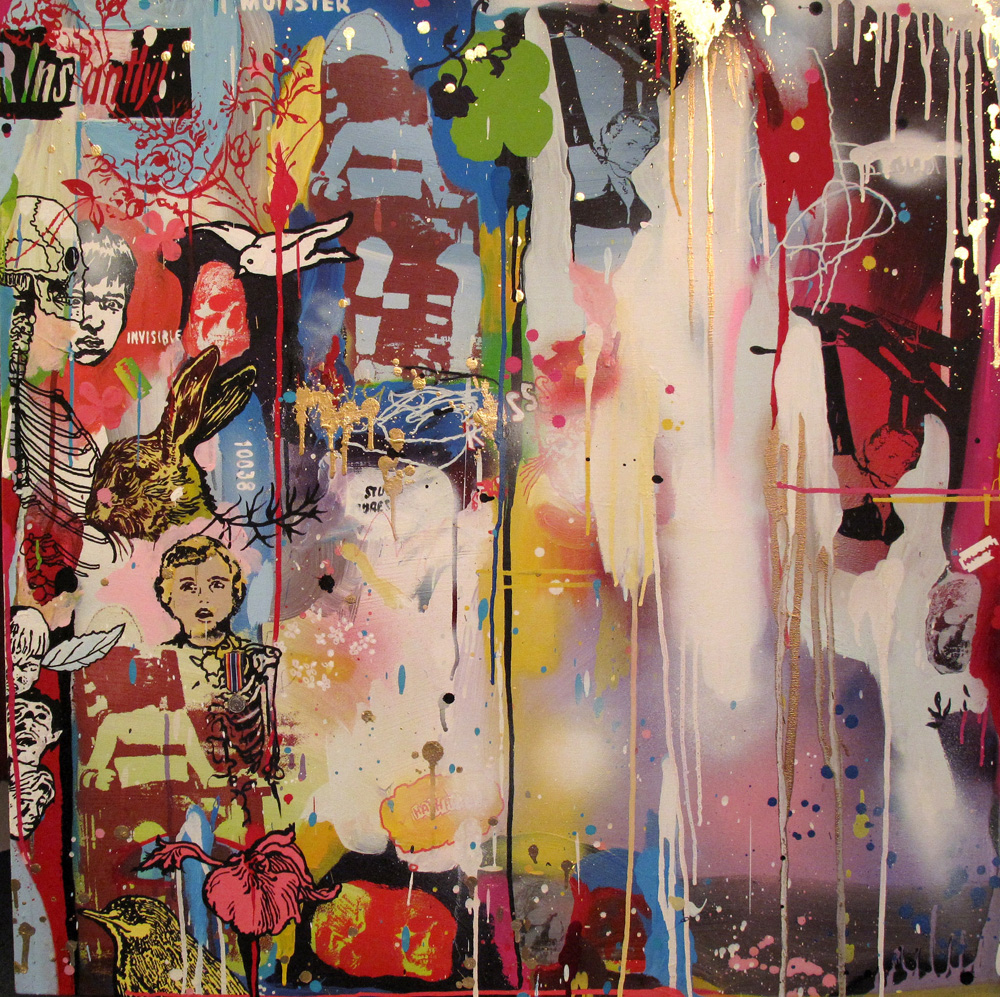 AM: How did you find working with Dan/Hush and what do you feel they added to your work?

Dan: MASSIVE FUN – WHEN HIS TWO ARRIVED WE WERE LIKE ‘WOOOAHHHH’ AS THEY WERE BEAUTIFUL, AND THE COLOURS ARE ONES I WOULDN’T NORMALLY WORK ON, ALL MUTED ICE BLUES AND OFF GREYS – REALLY SEXY – I COULDN’T WAIT TO WORK OVER THEM CAUSE I KNEW MY CANDY TONES WOULD LEAP OUT – I HAD TO HAVE A BEER THOUGH AS YOU KNOW, YOU ARE PAINTING OVER SOMEONE’S WORK. IT’S A GREAT EXPERIENCE – I FOUND HIM TO BE NOTHING BUT A PROFESSIONAL AND I LOVE THE CONTRAST WITH HIS FIGURES AND TEXT WITH MY WORK – REALLY ENJOYABLE PROCESS.

Hush: Working with Dan was a must from the start. I’ve admired his work for a while and knew it would bring a whole new world to my pieces. Even though I do work with symbolism, Dan’s approach to this is probably much freer and I was looking forward to seeing how it could work.

We discussed ways of working and eventually came up with the idea of both making two pieces each and not worrying too much about what we could do to them afterwards. I did visualize how Dan might approach my pieces and managed to leave them to his discretion. The result was unreal 🙂 The freedom in collaborative pieces is a progressive creative process as I suppose it allows you to approach the works in a slightly different way. It was very exciting receiving Dan’s works as I knew what the story was going to be as soon as I saw what he had made. Integrating my style with his came very natural and injects an energy into how you approach the work. It’s an amazing experience watching your work grow and vice versa. 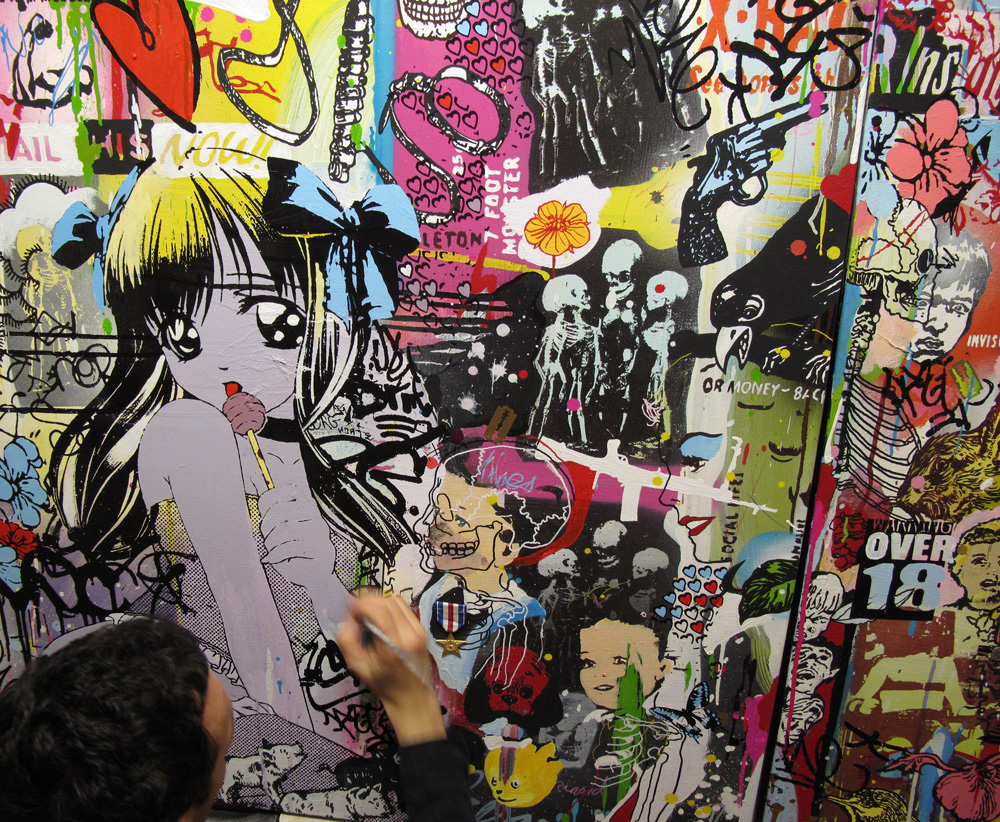 AM: Your pieces are in a show of works based on typography. Type features in a lot of your paintings, what do you feel it adds to the work?

Dan: I’VE ALWAYS USED TEXT IN MY WORK – FROM WAY BACK IN THE 90S, JUST SPONTANEOUS WORD AND IMAGE PIECES – WAY BEFORE I EVEN HEARD OF BASQUIAT, I WAS DOING THAT A LOT – POURING IT STRAIGHT FROM THE HEAD TO THE CANVAS – THEN AS THE WORK DEVELOPED, IT’S SOMETHING I’VE ALWAYS KEPT IN IT – CAUSE IT’S LIKE A SNAPSHOT OF A SCENE OF A MOMENT IN LIFE – WE ARE SURROUNDED WITH IMAGERY AND LOGOS AND TEXT – SO IT ADDS A ELEMENT OF REALISM OR A CLUE TO THE PIECE – OR NOT – A TEXTURE.

I DON’T USE TEXT MUCH THESE DAYS AS IN TYPOGRAPHY, MORE JUST SCRIBBLED WORDS – DIRECT THOUGHTS AND TITLES. I HAD TO KEEP REMINDING MYSELF THE BRIEF WAS DON’T BELIEVE THE TYPE, BUT CARLO HAD ALREADY USED A LOT SO I WORKED WITH HIS – A LOT OF WARHOLS EARLY BLACK AND WHITE PAINTINGS FROM NEWSPAPER ADVERTS HAD TEXT. I ALWAYS LIKED HOW HE DIDN’T CARE ABOUT THE MEANING – IT WAS JUST WHAT IT WAS, MAY OF JUST BEEN READY ‘THEN MAIL THIS NOW!’ AND YOU KNOW ITS A SCRAP FROM AN ADVERT – WE ARE CONSTANTLY BOMBARDED WITH ADVERTS AND IT’S GETTING WORSE, THEY EVEN USE THE FLOOR NOW IN TRAIN STATIONS AND DIRECTLY ONTO HOTEL WALLS INSTEAD OF BILLBOARDS SO THEY CAN GET BIGGER AND MORE EXPOSURE – WHAT’S NEXT? PROJECTED ONTO THE MOON?

I TOLD YOU I’M HUNGOVER…

Hush: Type has always featured in my work from my interest in Typography and my design background. I use various styles as pointers towards, tagging, graffiti and commercialism/printing which places the work in a relevant time, which I think is important when making art. 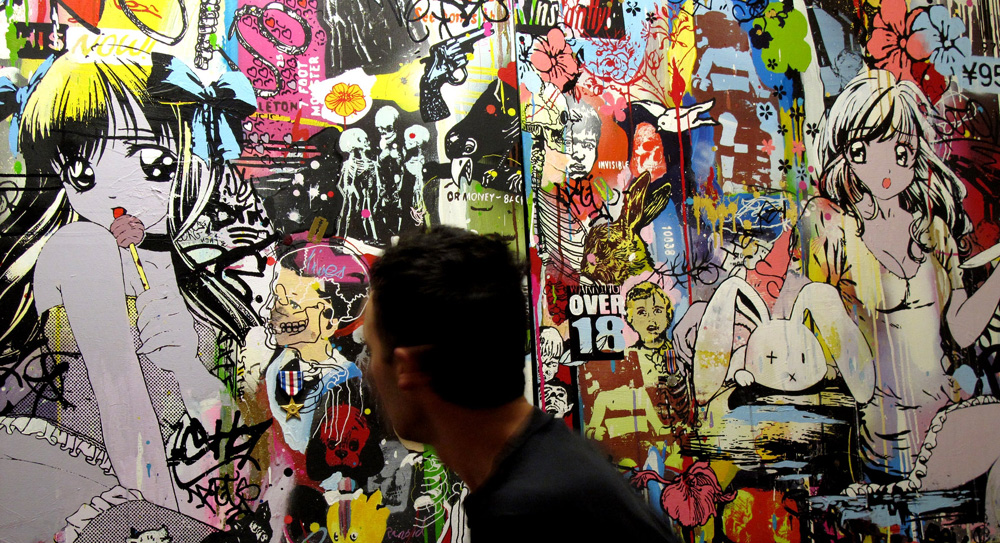 AM: What does the future hold and can you see yourself working with Dan/Hush again?

Dan: CHILL OUT FOR A BIT, THIS YEAR’S BEEN MENTAL. AFTER DECEMBER, THERE’S LONDON ART FAIR IN JAN AND THEN I CAN FOCUS ON NEXT JULY’S NEW SOLO IN LONDON AND THERE’S TALK OF MELBOURNE. I’M WORKING WITH A FASHION DESIGNER ON SOME COOL STUFF – LOT’S OF NICE COLLABORATIVE PROJECTS – MY WORKS IN THIS NEW FILM FREESTYLE OUT FEB – I’D LOVE TO DO THIS AGAIN YEAH, A SOLO OF THIS LIKE TEN OR TWELVE PIECES IN NEW YORK, L.A, TOKYO OR LONDON WOULD BE NICE – SO MUCH FUN. MAKE A PRINT OF ONE OF THESE I THINK – OVER N OUT…

Hush: Dan and I have both really enjoyed the process and will definitely be doing something together in the future. We’re both very busy next year but will be working out something special soon 🙂

The Dan Baldwin / Hush collaboration works will be exhibited at Don’t Believe the Type – Zero Cool Gallery, 49 Bethnal Green Road, Shoreditch, London – From the 11th of December until the 19th of December (Mon – Sat 10am until 6.30pm) with a preview night on the 10th of December between 6.30 and 9.30. To attend the preview night, please contact [email protected] to be added to the guest list.

Many thanks to Anthony of Zero Cool….