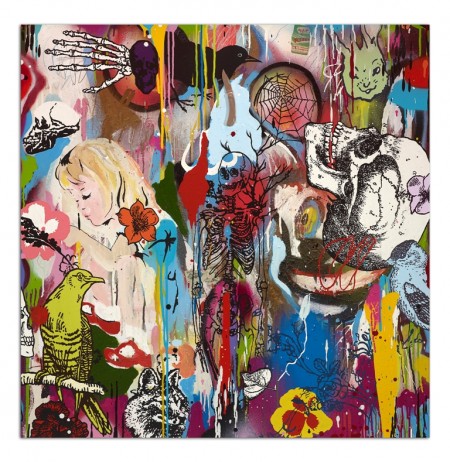 Over the past few years Dan Baldwin has established himself as one of the notable artists in the UKâ€™s new contemporary art scene. A distinct voice in a landscape full of artists whose works are often too similar to distinguish, Dan has proven himself to be fresh and somewhat unique. Itâ€™s great to see him traveling to the US for his first solo exhibition, â€œDisillusion,â€ opening Thursday, September 10 at Carmichael Gallery in Los Angeles.

AM sat down for a chat with the man himself. Interview and preview of the showÂ after the jump. 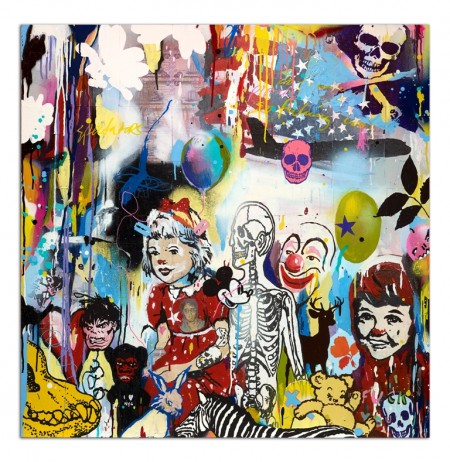 Arrested Motion (AM): Can you tell AM readers a bit about your background and where youâ€™re from?

Dan Baldwin (DB): I was born in Manchester and lived there until I was 9 when my parents split up and I was taken down to the south of England. I studied Communication Media/Illustration from 1990-1995 and won an award for excellence at Maidstone School of Art. Although I studied Illustration, Iâ€™ve always worked in a non-traditional, fine art way. I remember a portfolio consultant coming to our college, and saying to me, you are not an illustrator! And I said, why not? Who says a painting canâ€™t be an album cover or a book cover?

I stayed on as a studio associate for a year after school, then curated a show in London in 1996. I spent from 1995 until 2006 working constantly until I could be a full time artist â€“ I rented a big studio in Brighton, constantly developing my work and gradually began to get into shows in London. Itâ€™s taken a long time to get here. 20 years now. 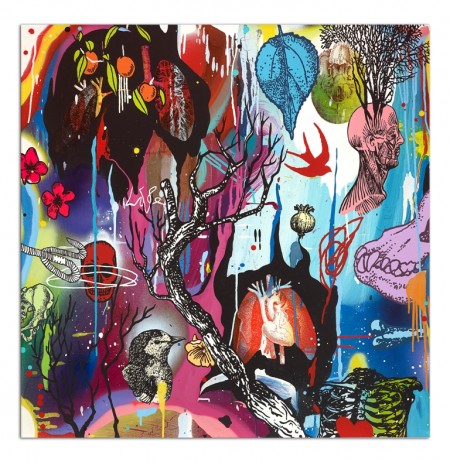 AM: Who would you say are your major artistic influences?

DB: I was a skater for about 8 years in the 80s, really loved Powell Peralta and all their graphics. I think this influenced me when I think back. At art college, the first artists I discovered and loved were Joseph Cornell, Peter Blake, Rauschenberg, the pop artists, especially Warhol â€“ then later Basquiat, I love Hockney too â€“ later on, Damien Hirst and Jake and Dinos Chapman. Also Francis Bacon, Gilbert and George and Hieronymus Bosch. 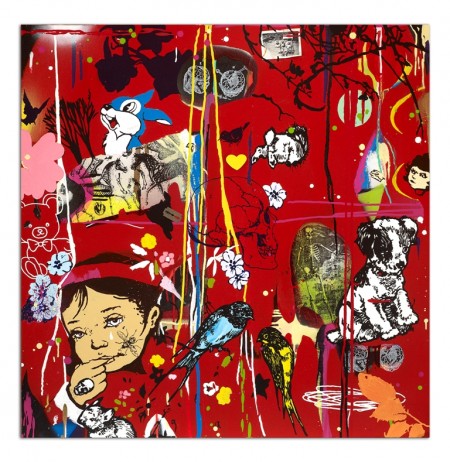 AM: Your artwork features a lot of color, layering and mixed media. Can you tell us a little bit about the creative process and what you have in mind when you begin a new piece?

DB: I donâ€™t have an idea as to what the piece may become when I begin. I literally start like an abstract expressionist with mark making and color and form and shapes, then develop the piece in layers. I collect images Iâ€™m attracted to, like a WW2 photo of tanks, or an x-ray of a horse, or a sinister clown, and they will begin the journey. Then it becomes like a puzzle I have to solve, a story. Itâ€™s all about associations, symbolism, links: a skeleton may appear, then a little girl, then the tanks will continue the theme of death juxtaposed against innocence and the piece becomes a battle ground, then I’ll apply an Iraqi Dina to underline the comment on the current war and to give an element of realism, then a little puppy may appear and link back to the innocent girl, then a gold crucifix may be applied, highlighting the relationship between life, death, war, religion and faith. The work continues to build up until itâ€™s a complex composition of complementary contradictions. Itâ€™s a bit like composing music, layering until it becomes just right. 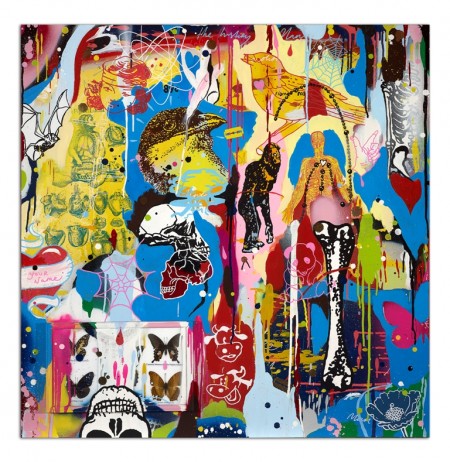 AM: You use a lot of three dimensional components in your artwork that can be difficult for people to see in photographs and on the internet. Can you describe the differences in the visual experience to our readers?

DB: Seeing the work in person, you can see the layering, the subtle areas, the gold leaf, the pencil words and scribbles; there may be a crucifix under the paint or part of a flag. It always looks so better when you see it â€“ the colors, the razor blades, they become physical objects â€“ none of that can be appreciated in a tiny online image. Itâ€™s like being an art student seeing Pollock in books, then finally seeing a Pollock in the Tate gallery and going, â€œOh fuck me, look at the size of that!!â€ It has a much bigger impact. 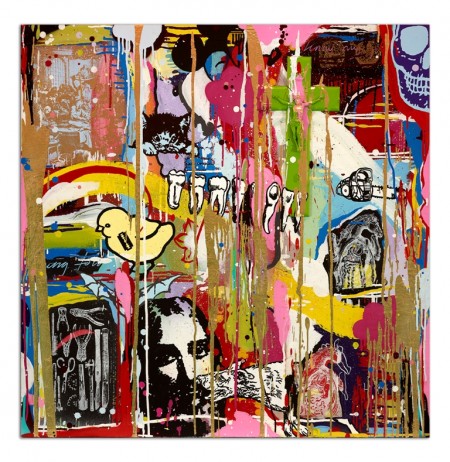 AM: One of your paintings sold high over estimate at the first Urban Art auction at Bonhams in February, 2008. How did you become associated with the urban art movement? Is that somewhere you think you belong?

DB: I think Iâ€™m hard to categorize. Iâ€™m not a street artist, Iâ€™m not urban, but then my work fits with this scene because of the graphic elements, the political references. I was in three exhibitions with Antony Micallef back in 2005/6 and we then had the same dealer (he worked on the same road but we didnâ€™t become friends until later). I was in a show with Steve Lazarides. Iâ€™ve shown alongside Jamie Hewlett and Faile, but really Iâ€™ve always aimed at the traditional gallery side of things. I donâ€™t worry about labels. The whole scene was really good for me, the supporters who bought my prints, every piece of work I made â€“ Iâ€™m really grateful for all of that. It got my name out there.

I was open to a lot of criticism from that scene as well, though, which is hard to take. But where would you place someone like Basquiat? He wasnâ€™t labeled street or fine art or folk or graffiti â€“ but he was all these things. Iâ€™m just grateful to the people who love what I do. Iâ€™ve since exhibited alongside most of the heroes I mentioned above and to see my name next to Hirst or Basquiat is a huge thrill for me. 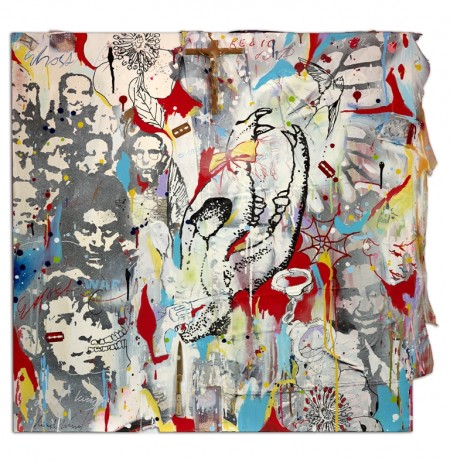 AM: This will be your first show in Los Angeles and your first solo show since last September. How did the City of Angels influence the direction of this new body of work?

DB: Well I really continued from my show before this, which was “Dead Innocent,” but I canâ€™t help but be affected by the fact that the work was destined for America, so there are naturally a few references. I also was aware that maybe I was not as known in America. But, I try not to let things like that affect the work. It was more to do with the state of me as I made it. The show is called â€œDisillusionâ€ because I was really beginning to get disillusioned with everything; my gallery went down, England went down, we went into a recession. It was a shit time from September to April and I poured it all into my work. Itâ€™s made this show much deeper, more mature than the one before. 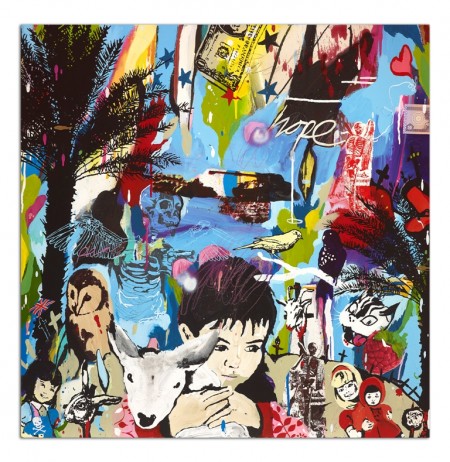 AM: What are you most looking forward to doing while in LA?

DB: Itâ€™s exciting to be coming to LA. Iâ€™m keen to relax mainly because Iâ€™m mentally worn out, but I want to see the Roosevelt hotel where Hockney made the Bigger Splash painting. I really just want to take LA as it comes and enjoy being there, explore West Hollywood. I have a list of places to visit but Iâ€™m not going to beat myself up if I donâ€™t see as much as I want â€“ Iâ€™m there to chill out and drink a few cocktails on the rooftop bar! Itâ€™s very surreal for me to spend nearly a year in solitude in West Sussex and then see all the work in West Hollywood. Should be fun! 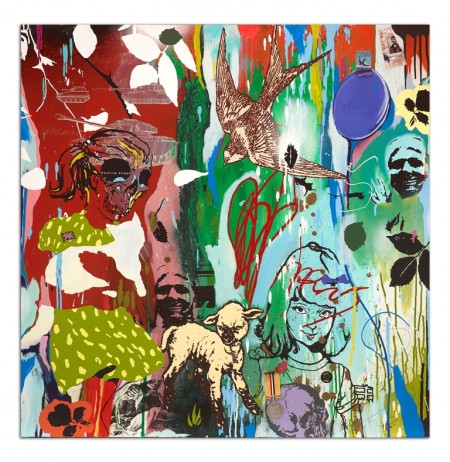