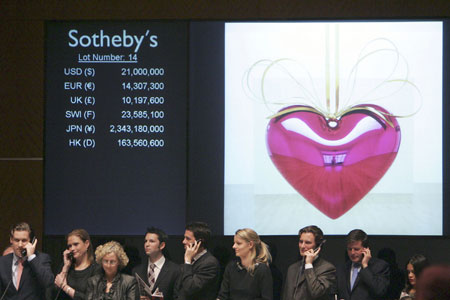 Two of the biggest stars of the art boom in the latter part of the last decade, Jeff Koons and Damien Hirst, were bound to feel the effects of the down economy. It’s taken some time to compile the data of all the fallout but it looks like their works have taken about a 50% hit in value since those happier times. On the brighter side, sounds as though the fairly or unfairly portrayed scapegoats of the art world’s extravagance should make a recovery eventually, perhaps in another ten years. Afterall, a big part of the problem has been overproduction and that didn’t affect Warhol’s market in the end… See all the analysis here.

Story via Bloomberg.
Image via Elitechoice.