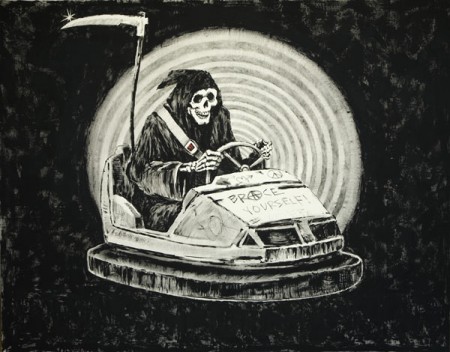 With Banksy’s recent documentary Exit Through The Gift Shop premiering with much success and fan fare accross the world (coverage here), wouldn’t it be a pain to share a name with this recently well-known film?  Well, for the rock band formerly known as Exit Through The Gift Shop it becomes a blessing in disguise as Banksy took the time to make a “double mattress” size canvas for the band with a new name of Brace Yourself, which has the Grim Reaper clutching the wheel of a bumper car. Pretty nice logo/brand exchange for a band you named 18 months ago!

Hey Banksy… want to name your next project “Arrested Motion”?