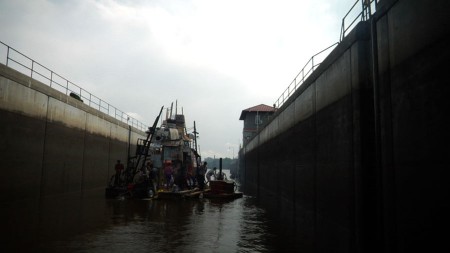 Tomorrow night, Rooftop Films will kick off its summer screening series with a special free event entitled Flood Tide: Remixed. The event will feature a 50-minute composition of footage from Flood Tide, a film shot on the Hudson River during Swoon (interviewed) and friends’ 2008 Swimming Cities of the Switchback Sea raft project. Flood Tide: Remixed uses non-narrative material not included in the film and will be accompanied live by Swimming Cities musical collaborators, Dark Dark Dark.

Floodtide: Remixed will take place at 7pm at Socrates Sculpture Park in Long Island City, Queens, NYC. Check out a video clip of Flood Tide, after the jump.

It was the summer the gas stations closed. The summer they played music in the old mill. The summer they left. Flood Tide tells the story of four musicians who craft extraordinary boats out of whatever junk they can find and set out for open water.