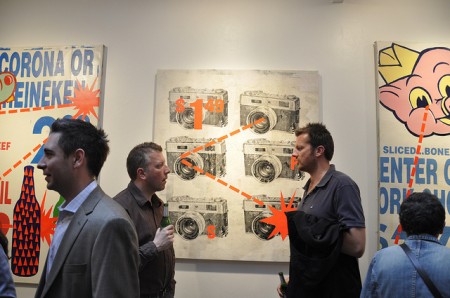 Lazarides’ latest exhibition at their Rathbone Place space opened on the 20th of August and showcased a solo exhibition by legendary Brooklyn artist Bäst.

On show are a series of large scale works on canvas, paper and wood, along with several sculptural pieces, which sees the artist revisit and expand upon themes and styles he has been experimenting with for many years. The bold red and blue Key Foods posters once used as backdrops are here recreated as thick, textured acrylic and, on the canvas pieces, are overlain with adverts for meat, beer and, of course, getaway ponies in a manner far more surreal than the original posters ever were. Perhaps the boldest works on show are a series of paper and large canvas pieces which show a repeated, tribal style geometrical imagery, snippets of text, and multi-eyed characters, which may be seen as nods toward NYC street (and fine) art precursors, Jean-Michel Basquiat and Keith Haring.

More words and photos after the jump from AM contributer Mike Stafford. 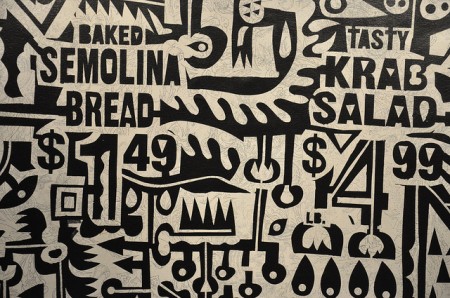 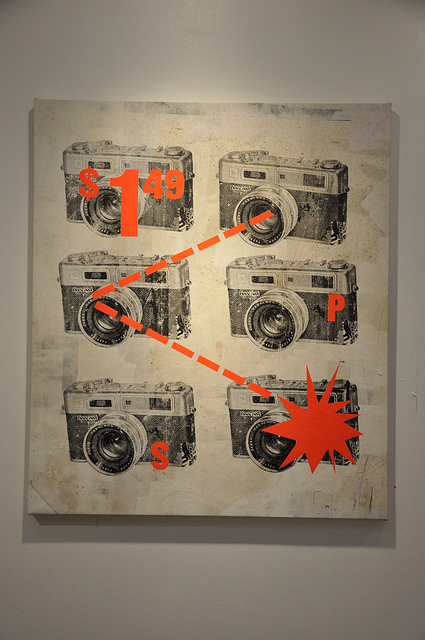 There is great use of an early Bäst paster, showing an old camera with the manufacturers logo replaced with that of Pan-Am, here repeated multiple times on a grimy, layered canvas before being brought bang up to date with the addition of neon orange dashed lines, an explosive exclamation and a $1.49 price tag. The fusion of old and new results in a piece which has huge impact and which has to be a contender for best in show. A close runner up must be the wild and wonderful Mercs whose bold geometry is given added texture by the addition of sand to the black paint that causes the patterning to sparkle under the gallery lights. 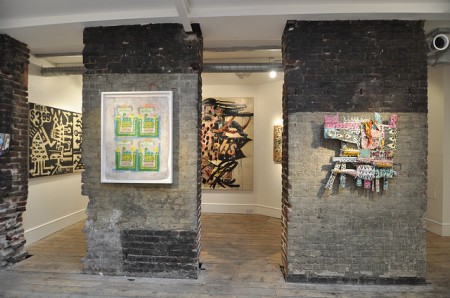 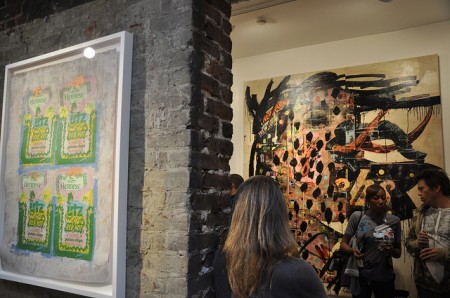 For those afraid of the new, there are a number of pieces from a few years back, the highlight being a spectacular, and very large, canvas based on the musk image which overwhelms in both its scale and in the rough, gritty detailing which the viewer is forced to get up close and confront due to the placement of the painting in the little annex at the back of the gallery. Whilst it might be argued that including work from several years ago, amongst such bold and progressive new stylings, may appear a little retrogressive, those fears are swiftly allayed when the pieces shown are of the quality of Musky and the smaller, but intensely detailed and moderately deranged, pig and boat themed Tropical Fantasy. 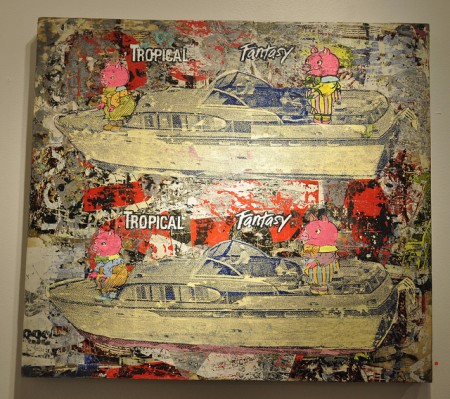 The two sculptures on display, Crockett and Tubs, share little in common with their namesakes other than the distinctly pastel hued palette used for Crockett but do add an interesting change in texture from the dominant 2-D works, as well as being fine pieces in their own rights. Tubs multiple eyes do have the unnerving habit of appearing to follow the viewer around the room, a trait that may, or may not, be considered a good thing. 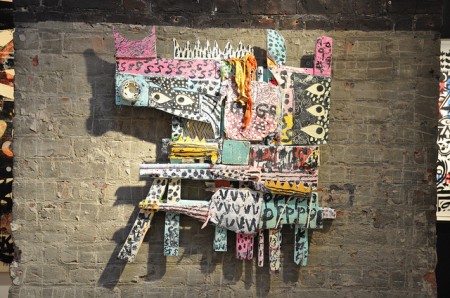 Finally, a Bäst show would not be complete without a few examples of his mixed up collage portraits and there are three large, and typically vibrant examples on display here. The most interesting, for this viewer, being the sublime Door Knocker with its chaotic assemblage of multiple eyes, logos, Disney characters, painted over with vibrant, almost day-glo, colouring and seemingly random daubings which all gel to form a slightly startled looking portrait. There are also a multitude of very small mixed media collages for sale, of somewhat patchy quality, and a fun, approximately A4 sized, collage displayed at the base of the ripped apart packaging it shipped in. 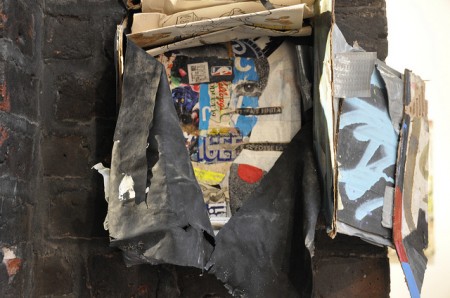 The show runs until the 30th September.