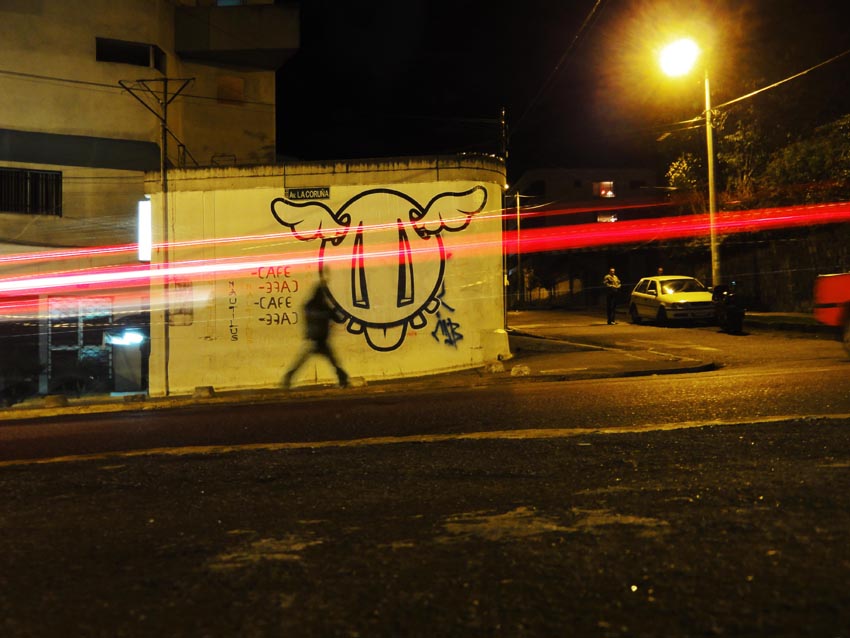 We’re partial to a bit of D*Face (interviewed) in our lives here at AM, so when we heard that he was traveling to South America to get down to some good old fashioned street art as part of Dinamo’s internationally vibed ‘9no Festival de Arte en la Calle’, held in the capital of Ecuador – Quito, we were naturally curious about what laid in store. Details seemed sketchy at best, and we wondered what may come of this trek halfway around the world. We wished him Buen Viaje, and hoped it would turn out well.

Having just arrived back, D sent us an amazing set of pictures of his Equatorial mission to paint and paste Quito, along with an entertaining commentary – the first part of which we bring you after the jump. 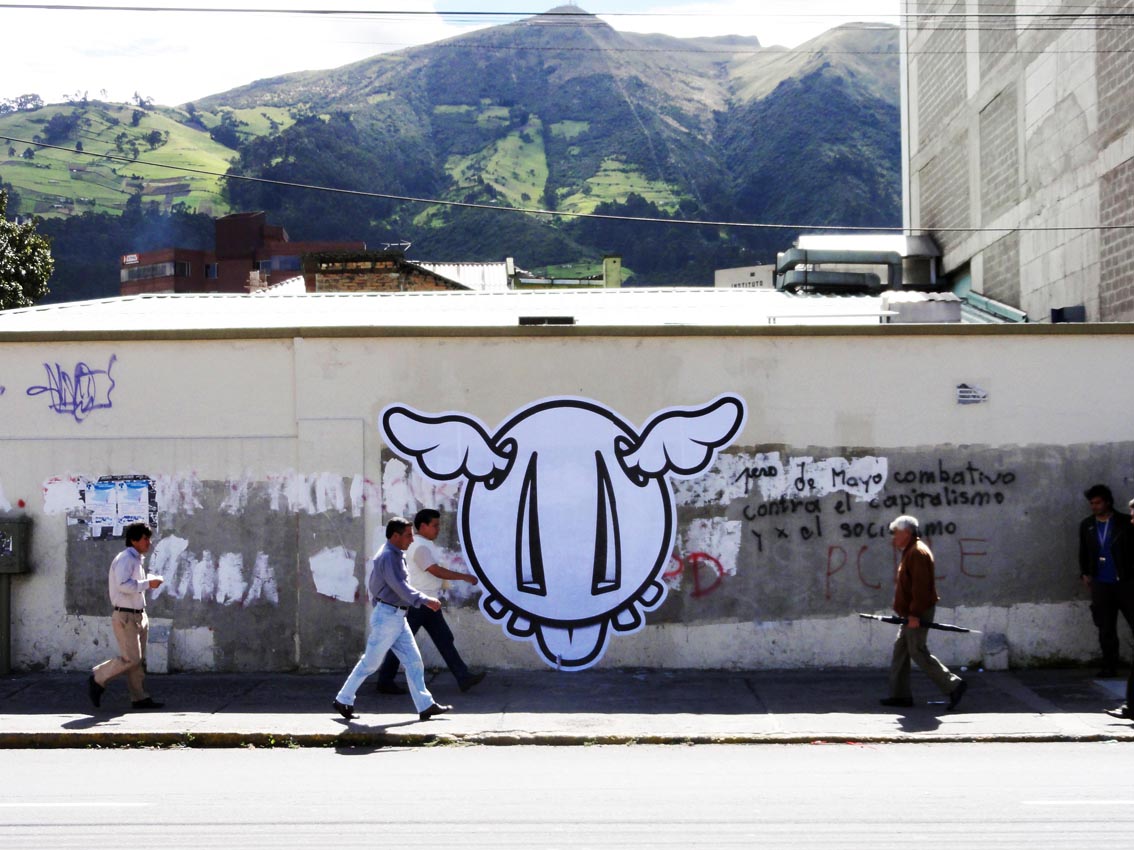 So one email out the blue led to another and before I could think much about it, i’d agreed to fly to Quito, Ecuador for the ‘9no Festival de Arte en la Calle’ to do what still left me scratching my head with uncertainty, so I packed heavily for all eventualities, wore my lucky pants, socks, hat, kissed my family and friends goodbye (the sort of goodbye where collectively everyone’s wondering if your flying into a kidnap plan) and set of on the first of 4 flights to get me to Quito. 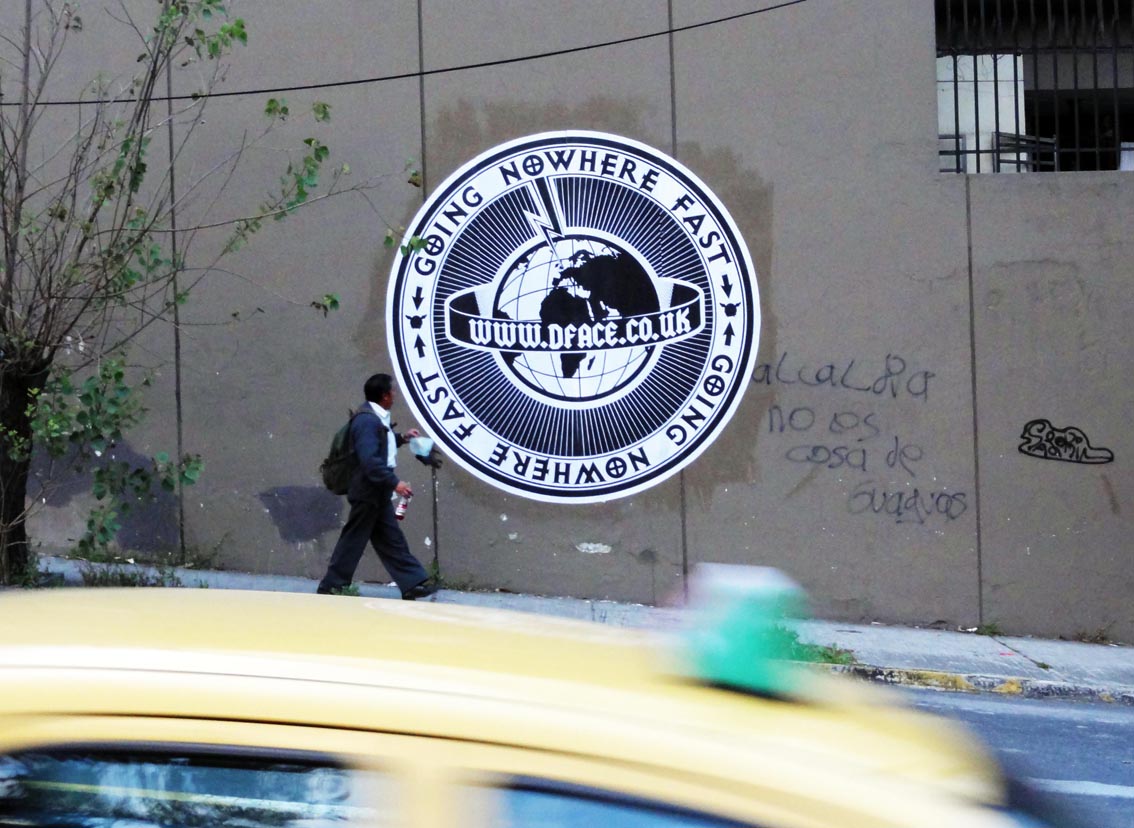 24 hours later I was 3100 meters above sea level and gasping for the native thin air mixed with a heavy blend of carbon monoxide from the spoils of unrestricted traffic pollution and looking for my captors, I mean hosts… Still, the smiling faces of Uri and Fernanda that met me at the airport and the beautiful surroundings – a sprawling city wedged into the base of a canyon straddled by towering snow capped mountains and volcanoes… made the kidnap thoughts fast disappear… the agenda… still no clearer… paint a car at the festival in 4 days time… the rest of the time… hit the city… fuck yeah. 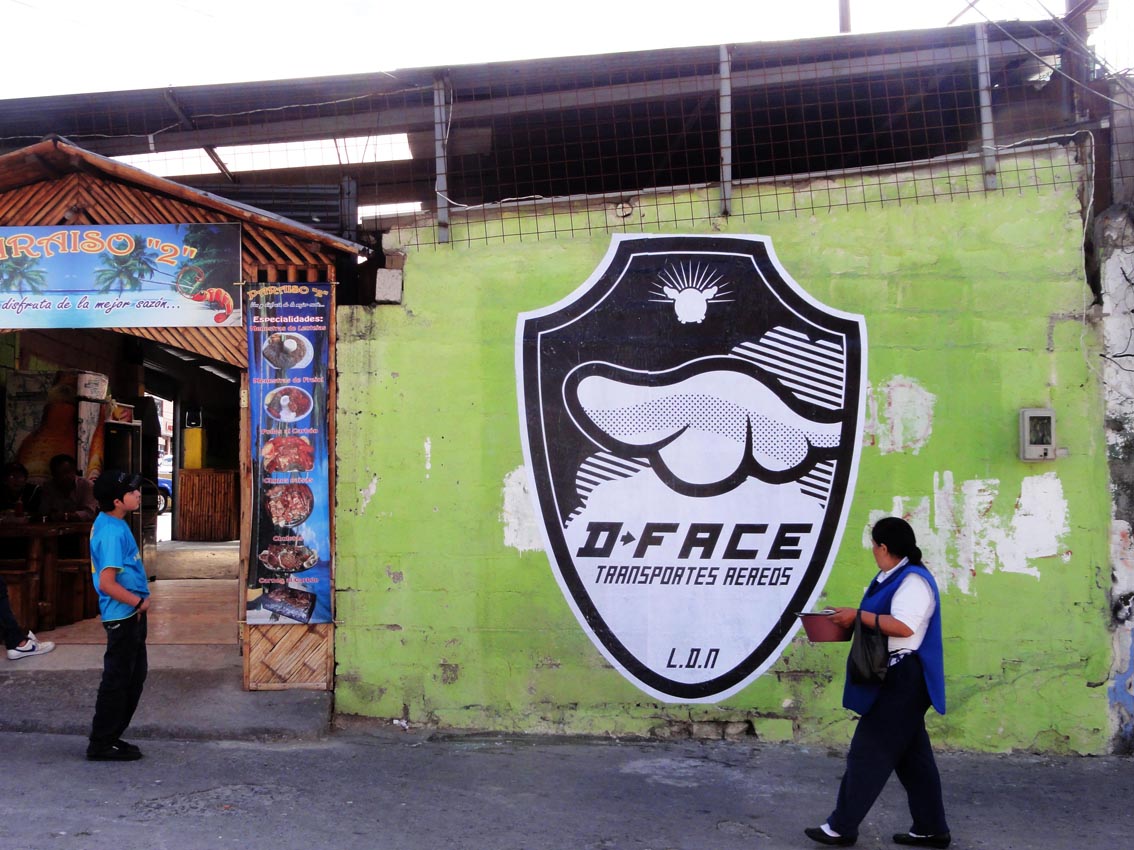 Good spray paint is as rare as hens teeth in rocking horse shit, luckily posters were the order of the day… at least until I could hook up whatever paint I could find… in a city where asking forgiveness, aided by a ‘$5 apologetic hand shake’ is easier than asking permission, most walls are fair game… 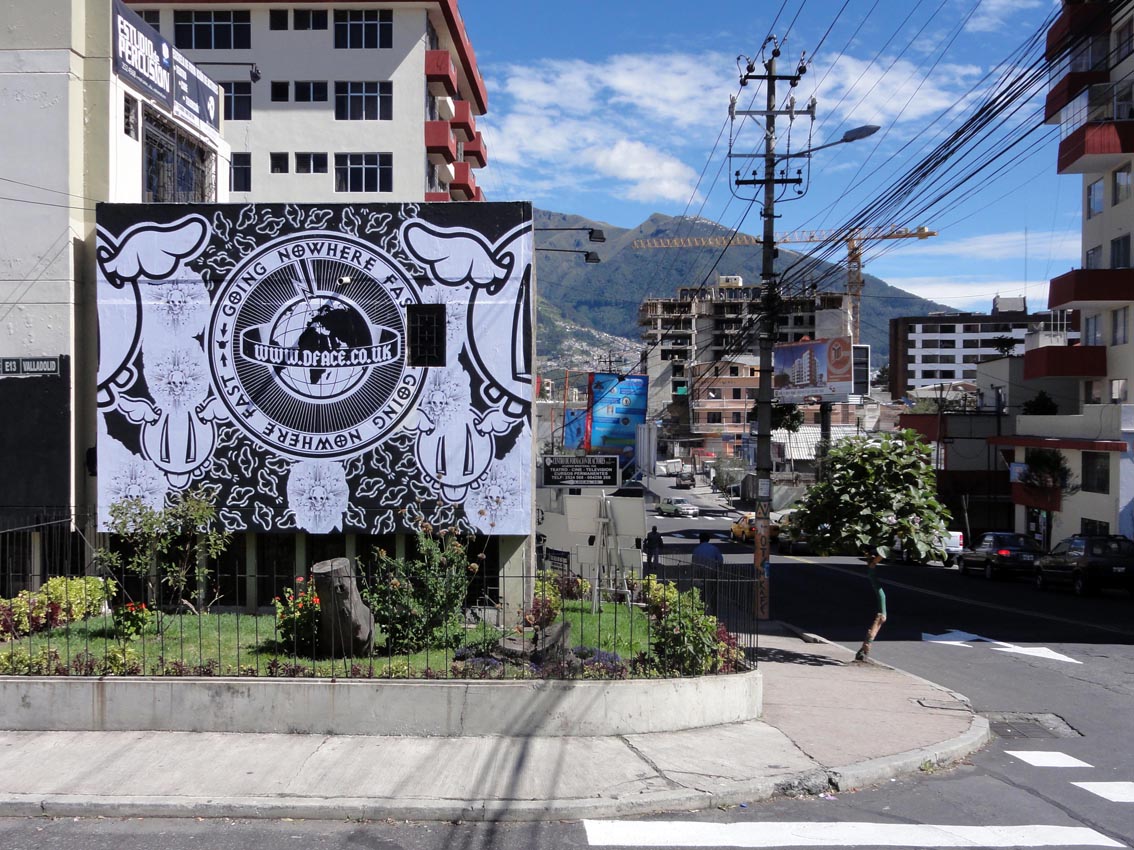 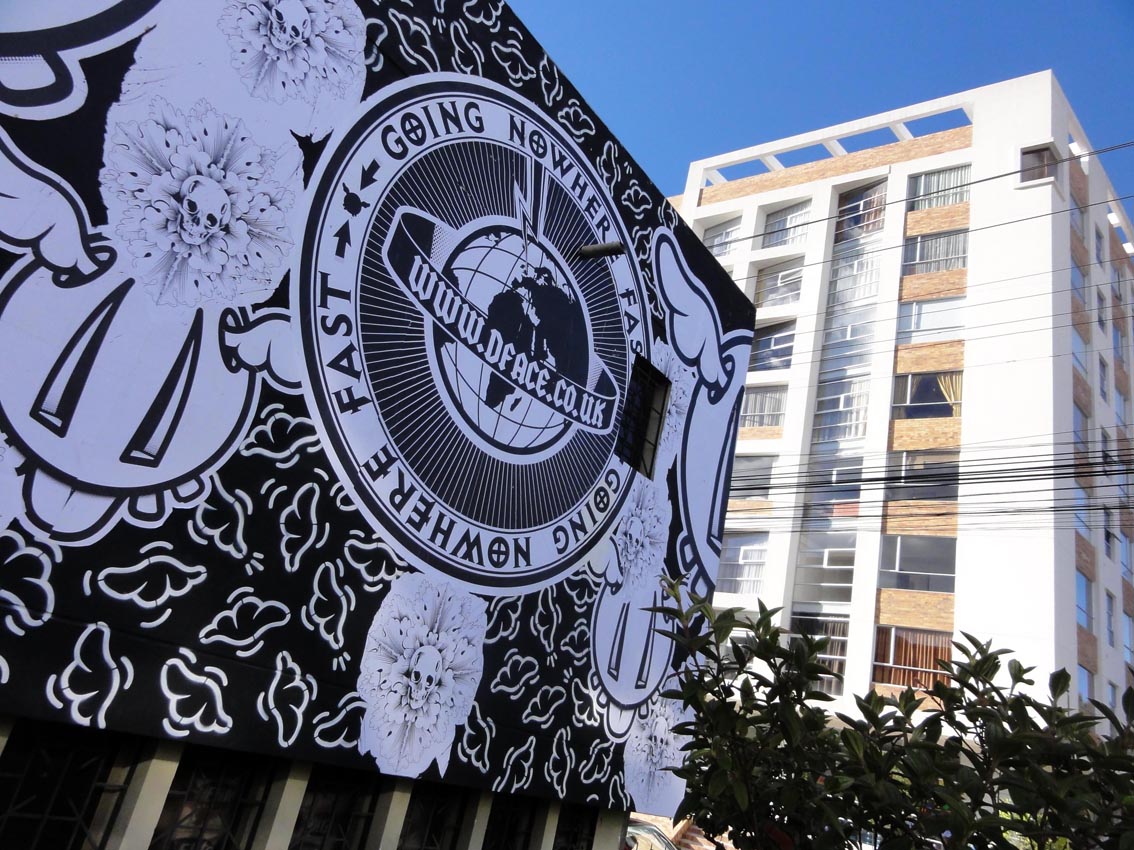 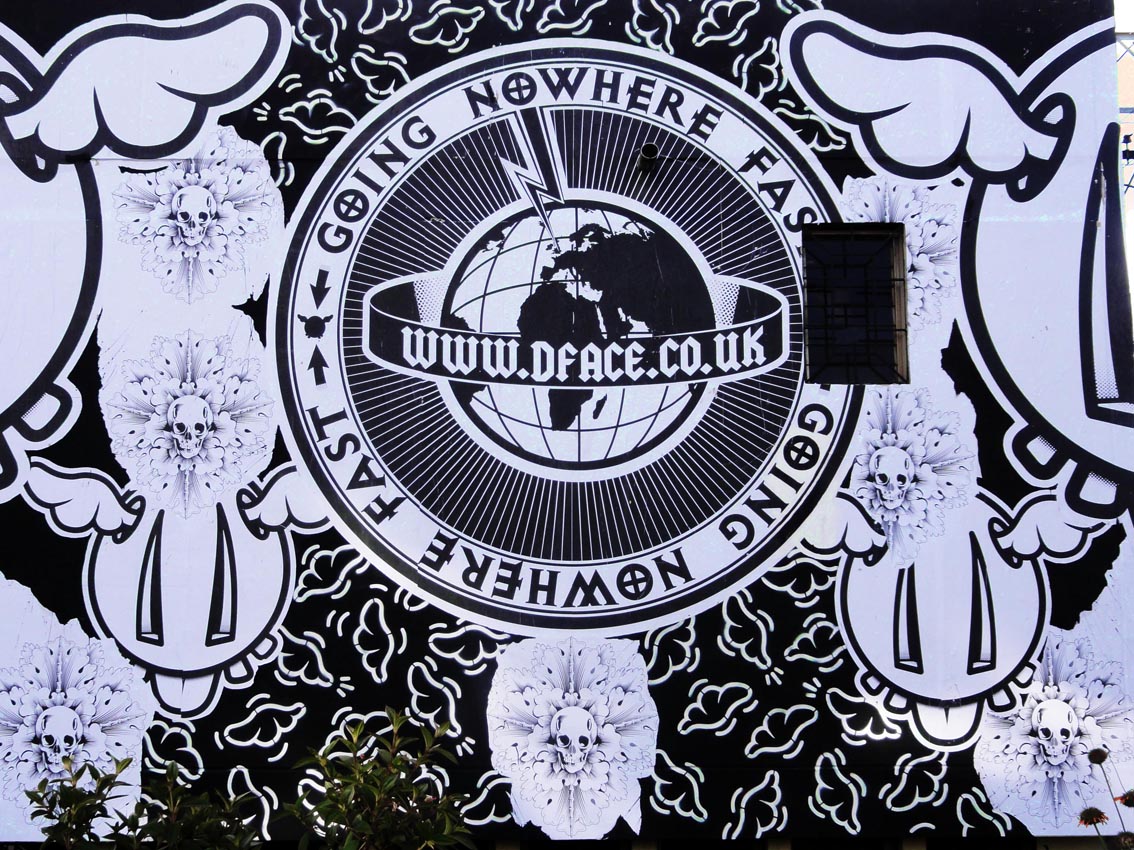 Keep it tuned to AM for part 2 of D*Face’s travelogue coming very soon – post paint hook-up!