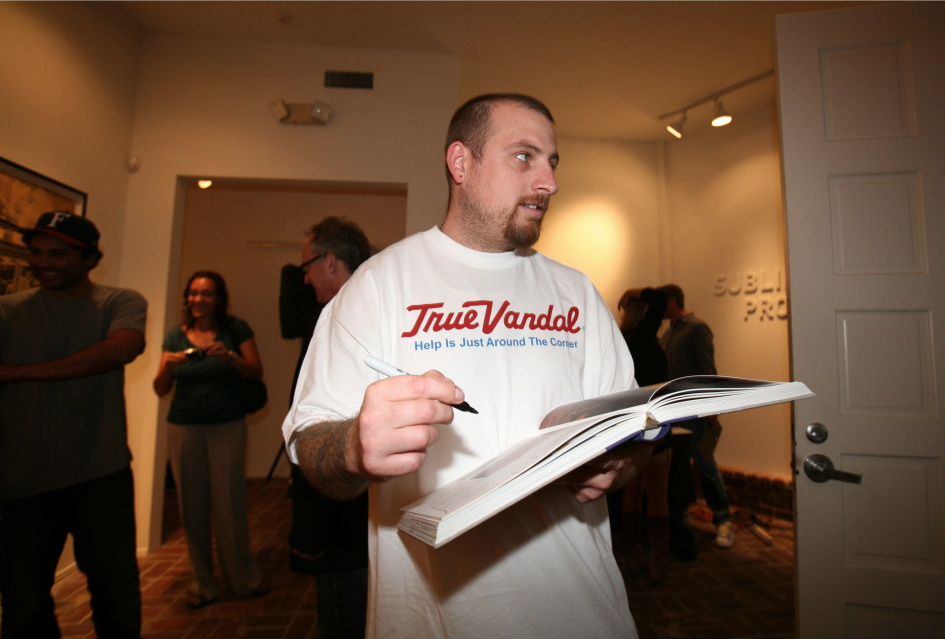 Subliminal Projects was the host venue for a joint event on Thursday, September 16th: the Los Angeles launch and signing for the book Beyond the Street, followed by the opening reception for Shepard Fairey’s Printed Matters exhibition (covered). A line began to form outside the gallery at 4 p.m., with the proper madness commencing three hours later when the doors opened.

Amanda and Shepard Fairey, Dave Kinsey, Herakut, Jana DesForges of BLK/MRKT, Marsea Goldberg of New Image Art, ex-FUN Gallery queen Patti Astor, Retna and Saber were all on hand to sign copies of Beyond the Street along with co-author/editor Patrick Nguyen. The elite crew AWR was well-represented on the night, with graffiti artists such as Eklips, Norm and Revok also turning up to show their support. Other guests in attendance included Albert Reyes, photographer Estevan Oriol, and Jeffrey Deitch’s assistant and sentinel, Naheed Simjee.

There was a buzzy, celebratory atmosphere at the gallery and the artwork was met with an enthusiastic reception. Shepard himself alternated between autographing books, chatting with visitors, and slipping behind the decks into his DJ Diabetic alter ego.

Just shy of 1,000 visitors attended the book signing and show during the evening. Crowds were such that gallery staff was forced to make occasional announcements, asking if those inside who’d already viewed the works on display could leave in order to make room for others still outside — in a queue that stretched for about 150 metres down the road. Subliminal Projects was good enough to stay open late into the night to ensure that everyone who’d been patiently waiting could eventually enter and see the exhibition.

Read on for more pictures from the signing after the jump. 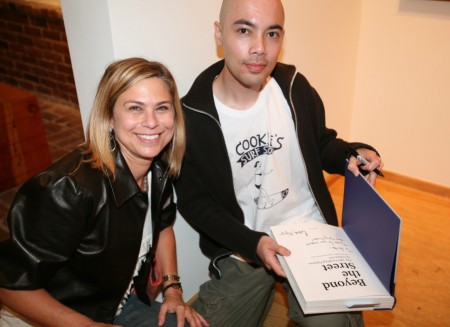 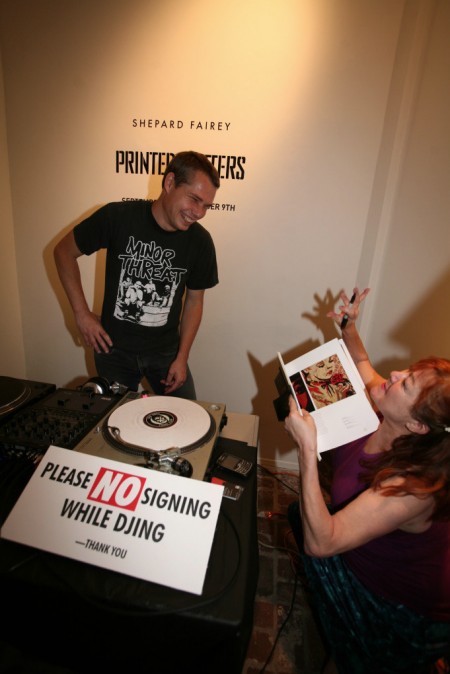 DJ Diabetic, with Patti Astor as usual ignoring the rules

DJ Diabetic, with Patti Astor as usual ignoring the rules

Studio Number One’s Tina Soikkeli, with Patti Astor in the crowd signing books and DJ Diabetic in the background