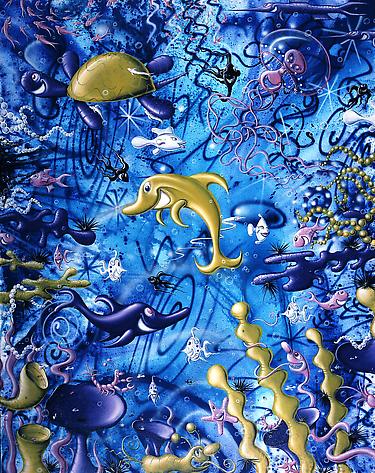 With an impressive December to serve as a launch pad, including his traffic-inducing mural completed at the iconic Houston and Bowery location (covered), a playful blacklight infested mobile trailer installation at Wynwood Walls during Basel Week (covered), and his colorful retrofitting of The Hole’s gallery space with Hot Glue Hullabaloo (covered), Kenny Scharf will launch into the new year with not one but two exhibitions on tap the same night with Paul Kasmin Gallery.

Opening on January 27th at one of their two Chelsea locations, Naturafutura will feature a new series of large-scale paintings inspired by the surroundings of the artist’s coastal studio in Brazil. The show will also highlight a couple of works, one of which is previewed above, that were inspired by and produced during the BP oil spill last year. Not to be outdone, Three Dozen! will feature 36 of his signature donut paintings, providing the perfect conceptual juxtaposition to the exhibit down the road. Opening the same Thursday night at the gallery’s alternate Chelsea location, brightly colored renditions of the ever-lovable confectionery muse will take center stage, all floating against his trademarked surreal backdrops. Collectively, the two shows will provide an enticing one-two punch of the 60’s inspired artwork for NYC residents.