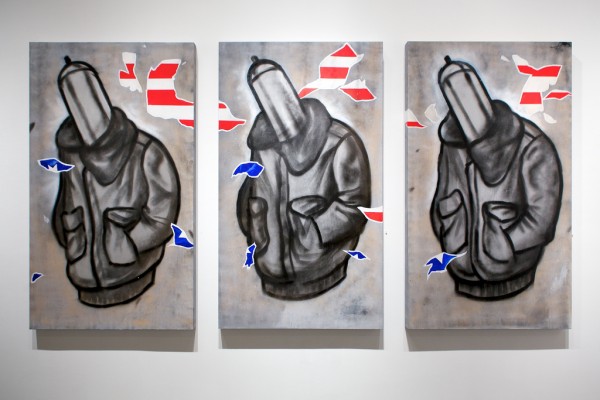 With the overwhelming success of Art in the Streets, it seems like LA can’t seem to get enough of street art lately. And for hardcore graffiti fans, one couldn’t ask for more than a group show curated by Roger Gastman, featuring New York legends CRASH and FREEDOM, alongside historic LA pioneer and figurehead RISK. Last Saturday, AM attended the opening of Blurring the Lines at Corey Helford Gallery, which features new work by these East and West Coast graffiti masters.

This exhibition marks a moment in history, where CRASH and FREEDOM have come to present their first exhibition together since 1987. Their new work is influenced by the iconic imagery of CRASH’s train paintings and FREEDOM’s legendary “Freedom Tunnel” project, where the artist temporarily occupied a two mile stretch of abandoned tunnel and devoted his art to depictions of the homeless. For the LA counterpart, RISK, who created the massive “graffiti alphabet” wall installation at the MOCA show, displays some of his dazzling letter styles, showing off some of what LA does best.

In the middle of the gallery sits a glass table filled with old school fat caps used in the 80’s, tiny little spray tips reminiscent of the ones originally taken from oven cleaners to produce thicker lines. Freedom and Risk were there to sign piece books and answer questions about their history in the graffiti movement, making this a treat for graff fans and museum goers alike.
See all the opening pics taken by Brandon Shigeta after the jump.