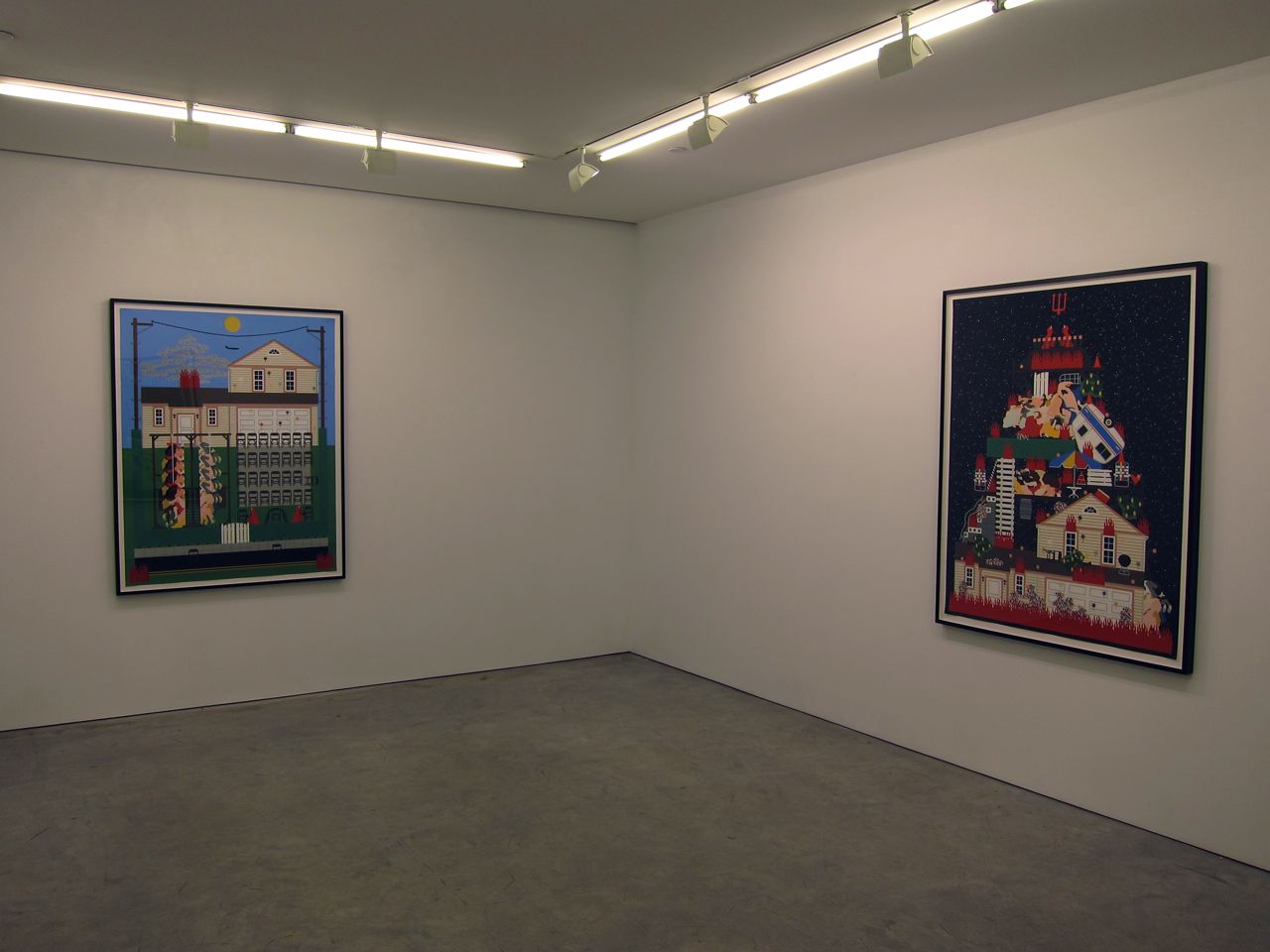 Currently showing at New York’s Fredericks and Freiser, Matthew Palladino’s latest exhibition simply entitled New Work is about to come to the end of its run on June 11th. AM has heard that of the four of the new pieces created for the exhibition – his first showing in a Chelsea gallery – one of the paintings was acquired by the Whitney Museum for it’s permanent collection.

We’ve enthused over Palladino’s work in the past, and wondered where he would take his dynamic and versatile painting technique with this latest mini-solo outing. Previous showings with F&F at this year’s Amory Show and with SF’s Baer Ridgeway at Miami’s Nada fair were preceded by a marvelous exhibition – Wonder Box – hailed by some who saw it as the show of the year in 2010. With his New York solo now a notch in his bedpost, we’re anxious to see where the talented artist will take his work next. One thing’s for sure – don’t expect stagnation from this understated artist. Palladino is known consistently for evolution within his work.

If you are in New York, treat yourself to an up close an personal look at his paintings before the show closes next week. Meanwhile, we have pictures from the show to accompany our interview with Palladino after the jump. 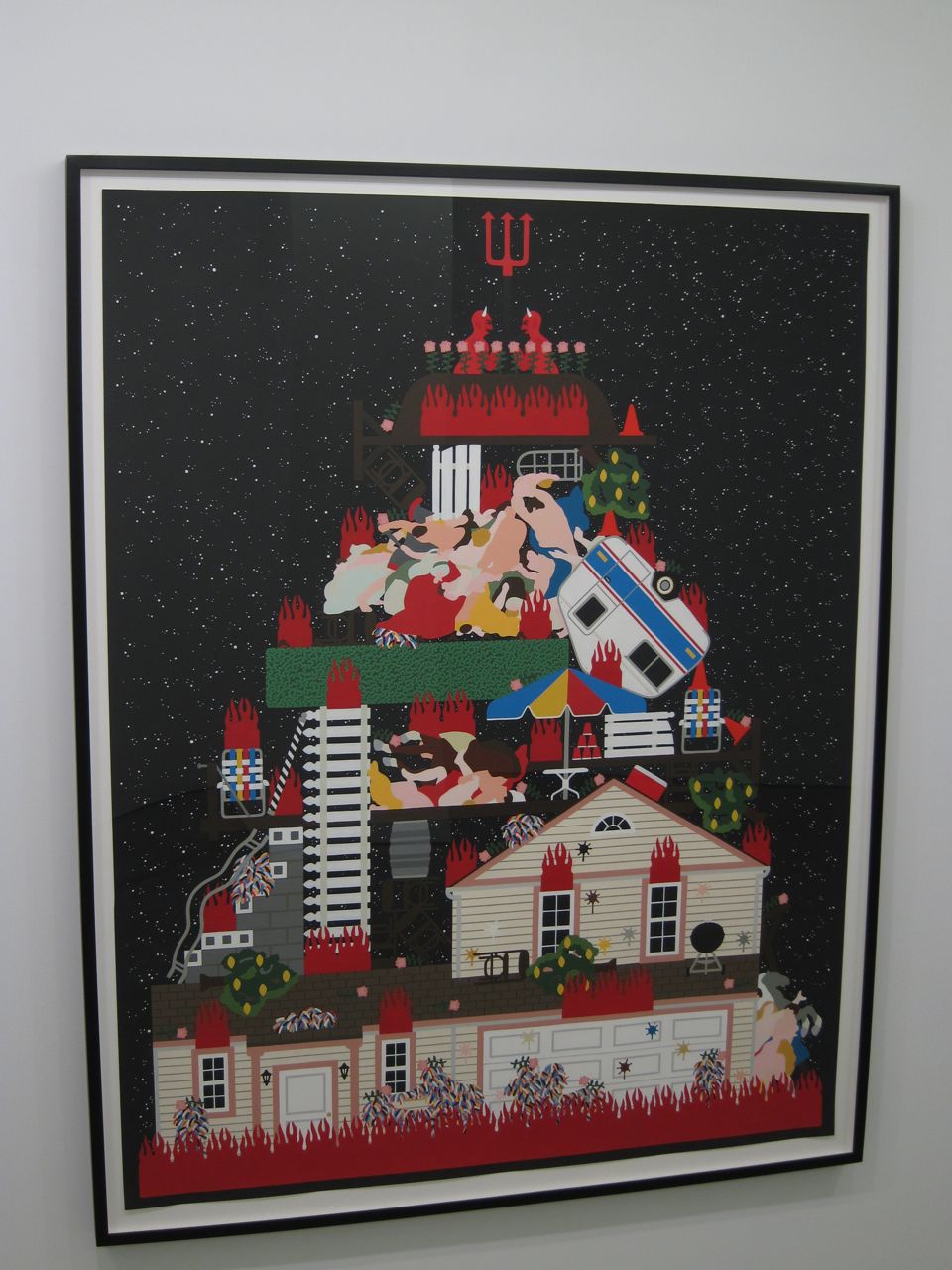 Arrested Motion (AM): I understand that you currently spend time living between Philadelphia and San Francisco. What do the two locations offer you as an artist? Do you find that your work takes on a variance in its direction or emotion when created in different places?

Matthew Palladino (MP): Well I was born and raised in SF, but moved to Philadelphia originally because it was more affordable, but ended up really falling in love with it. It feels like home now. Its important for me to feel comfortable with the neighborhood I live and work in, and I definitely have that here in Philadelphia. The clearest indication I can see that my immediate environment is affecting the work usually comes out in the objects that find their way into the drawings.

AM: Your work seems to continually evolve with each new showing you make. Is it that you strive to push yourself into new territories with each body of work, or do you feel that you haven’t yet found the visual dialect you are wholly comfortable with?

MP: I suppose the endless searching is the point right? My experience with my art never quite satiates me. The best stuff comes close, but at least for me, I get tired of one thing or the other and am hungry for the next. It seems like the good art I’ve seen is always evolving. But maybe that will change as I get older. What do 25 year olds know anyway? Probably not much. 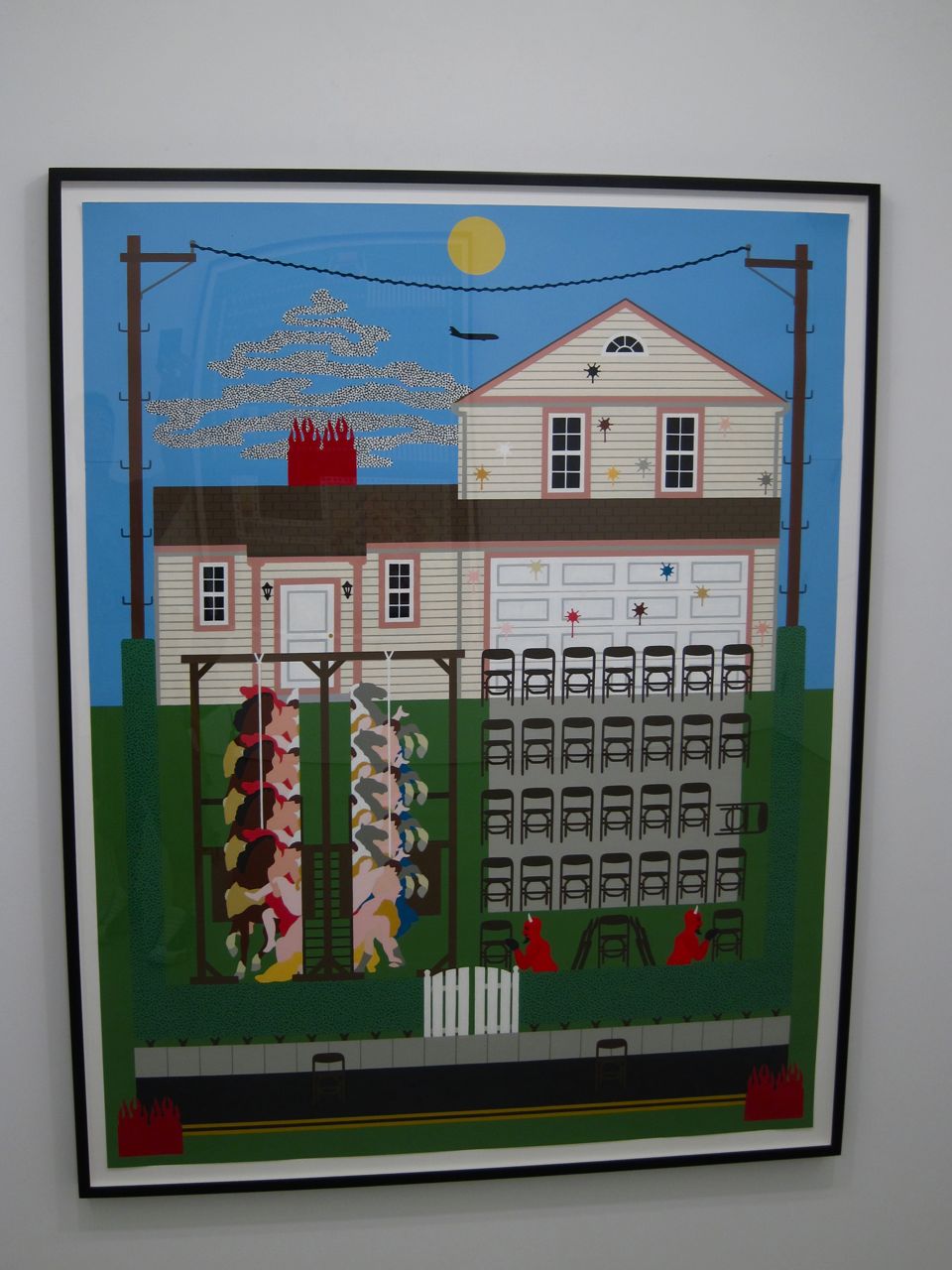 AM: You dropped out of art school part way through. What were the reasons behind this decision? Any regrets at this point in time?

MP: Yea, I only did two years. The drop out was triggered by financial complications. I regret it now, but at the time I was relieved to be out of school for the first time in my life. I really could have made more of an effort to petition the school for financial help, but at that point, I wasn’t in a place where I could really appreciate how lucky I was to be there.

I get a lot out of just talking to friends about art and work, I feel like that’s where I get the most out of conversations, though they’re probably not as focused as a grad school critique. I miss the formal education setting sometimes, and I’d probably get a lot out of it now. Sometimes I worry I missed something very important, like they tell you some secret to understanding art in your last semester at school. My friends who have graduated told me that this doesn’t happen, though I don’t know if I really believe them.

AM: Your work is filled with allegory – where do you find the concepts and ideas originate?

MP: I’m not sure where they come from. You see or hear something, maybe for the millionth time, and for some reason it strikes you in just a way, and you give it a level of attention that you hadn’t given it before. And it starts to feel important, but I don’t know why. It usually makes sense later. 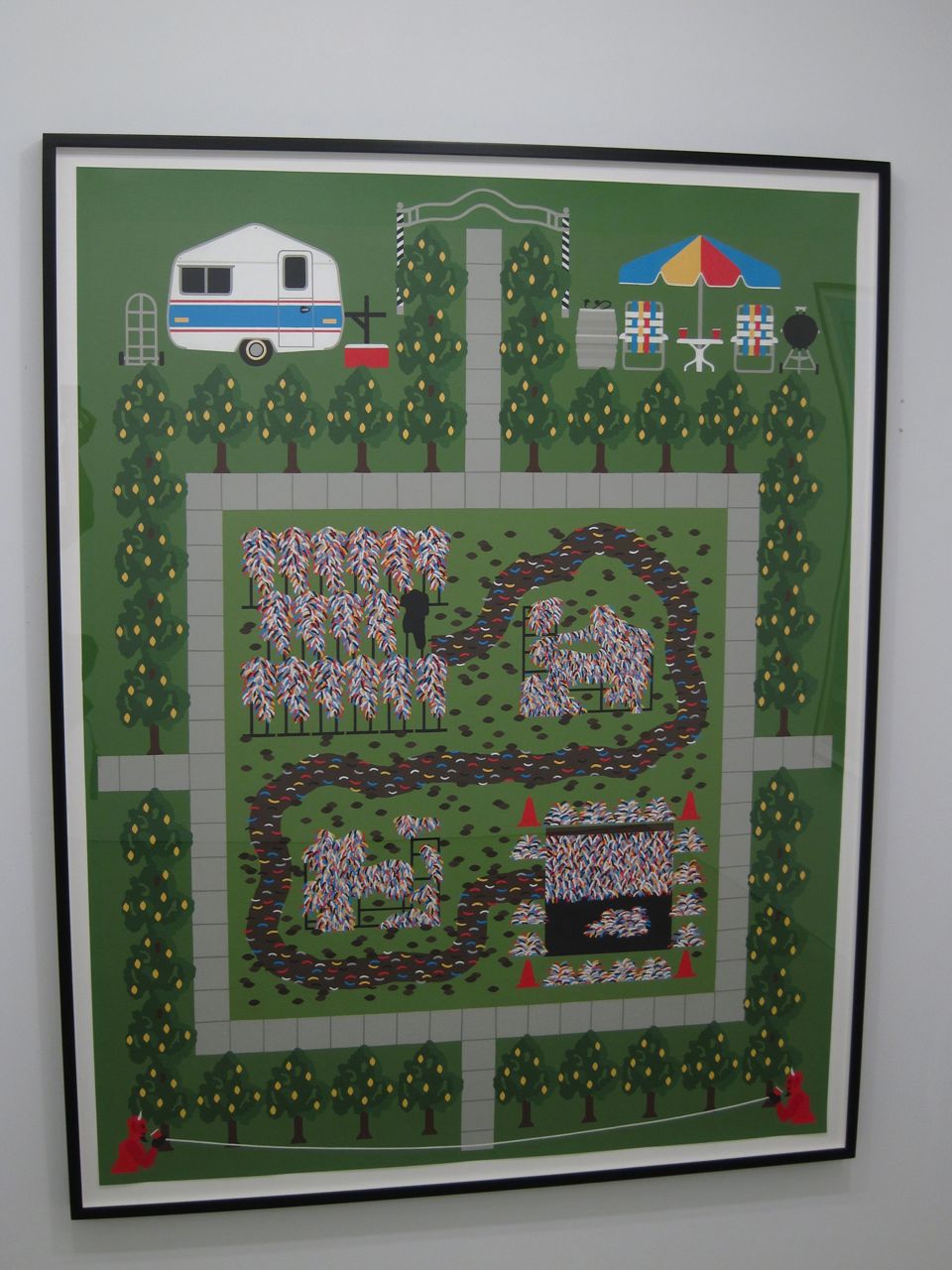 AM: Do you keep a sketchbook to capture ideas?

MP: I usually will write an idea down on a scrap of paper or my hand when it comes to me. Then if it’s meant to be, meaning I haven’t lost the piece of paper or washed my hand, I’ll write it down in a a bigger notebook, maybe with a light sketch just to jog my memory, then let it sit for awhile.

AM: The ghost paintings were a particular favorite series of mine. Was there a visual metaphor at work in these paintings?

MP: No there’s no metaphor. I thought I was seeing ghosts in my parents house for a little while. Whenever I’m alone in a house for too long I start to worry about seeing ghosts, though that hasn’t happened for awhile. Then I began to think about what really scared me was the anticipation of seeing a ghost, not the ghost itself. For example, I’m scared of balloons, not because they’re dangerous, but because the anticipation of them popping drives me crazy. By the way, don’t tell anyone you’re scared of balloons, they’ll take advantage of that information.

So, I thought if the ghosts weren’t so visually slippery; if there were some way to clearly identify them visually, maybe they wouldn’t be so frightening. So I put safety vests on the ghosts, or rather I “vested” them, to clearly delineate them. It totally worked. 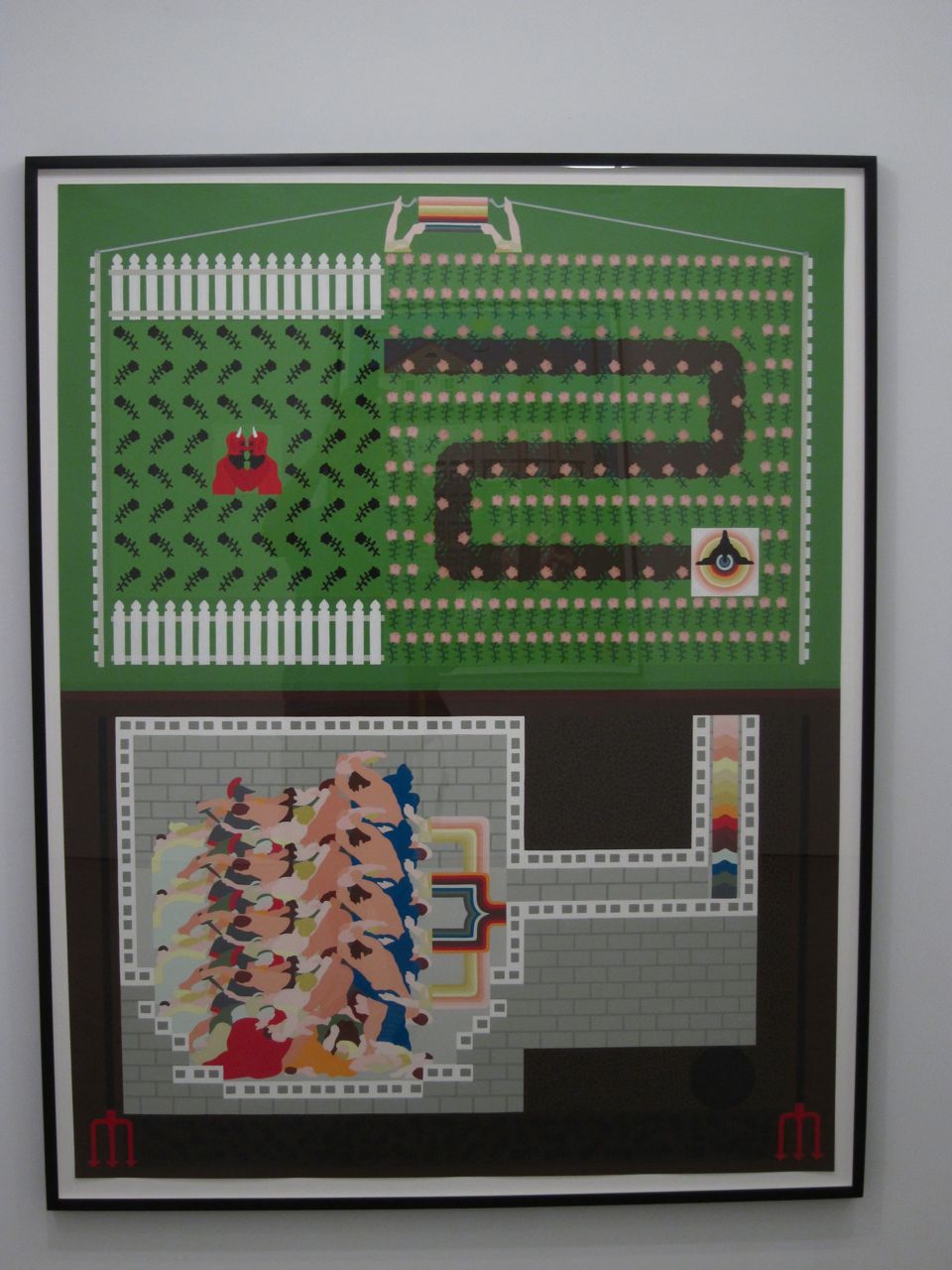 AM: Is art just a peepshow, as alluded to with Wonder Box – with the gallery door being the peephole, or do you feel there is more for the viewer of the work to experience and feel than purely on the visual level? What would you hope that someone gets from an exhibition of your work?

MP: Of course there’s more to art than the purely visual. But, I am drawn to exploring visual still images because they still have an intense and immediate power to it that is very distinct from other forms of communication. And, to be well versed in still images doesn’t mean that you can’t translate what you’ve learned into other forms of communication. Parallels abound in art. Its almost the only way I can talk about it sometimes, especially when I get to close to it. And I think, in the best circumstances, if someone gets something from my work, they’re getting the same rush of sensation that I get.

AM: Perspective and representation of the third dimension within a super-flat environment seems to be a feature of some of your most recent work. Do you construct props or 3d environments as studies?

MP: The perspective, I actually found out when I showed those pieces, is called isometric perspective. I had been calling it “fake” perspective. It’s when all the foreshortening is equal, like when you draw a cube where all the sides are the same length. It’s very unnatural. Engineers use it for technical drawings in diagrams which I’m sure is where I got the idea from. I guess you could almost look at those pieces as blueprints to build those images into real life 3D structures. I’ve played around with some 3d software, but I haven’t really given it the attention it deserves. 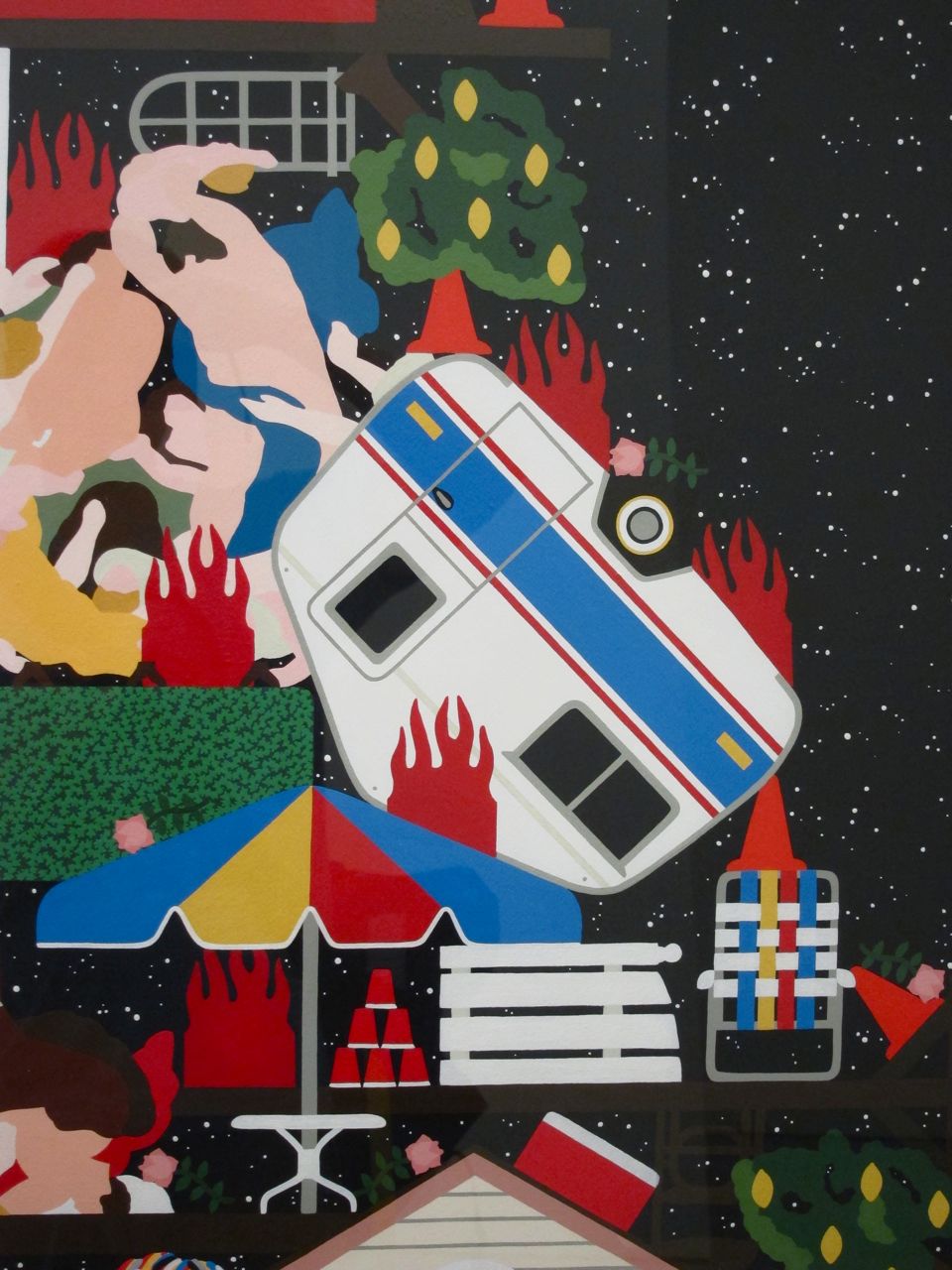 AM: Can you tell us a little about your creative environment? Do you work amidst chaos or order? Loud music or peace & quiet?

MP: I used to listen mostly to music, but over the past year, I’ve been mainly listening to podcasts. Talk radio is very comforting when you’re by yourself all day. Here’s a list of podcasts I’m currently listening to:

As for the studio itself, it can get pretty gross, but it’s in a neighborhood I love very much. It’s a windowless roll down garage that gets really hot and really cold. The roof leaks in the corner and sometimes rain water pools underneath the table. There used to be dozens and dozens of Arizona green tea cans but those have given way to diet coke bottles. There are cigarette butts everywhere, dust and dirt, paints, scraps of paper, and other garbage that blows in from the street. Some local kids were throwing rocks at the studio and running away for awhile. I’m not gonna even tell you the worst part. But it’s my first studio and it’s cheap, and I’m very grateful to have it.

AM: Can you share what other plans the rest of 2011 and beyond may bring for Matthew Palladino? 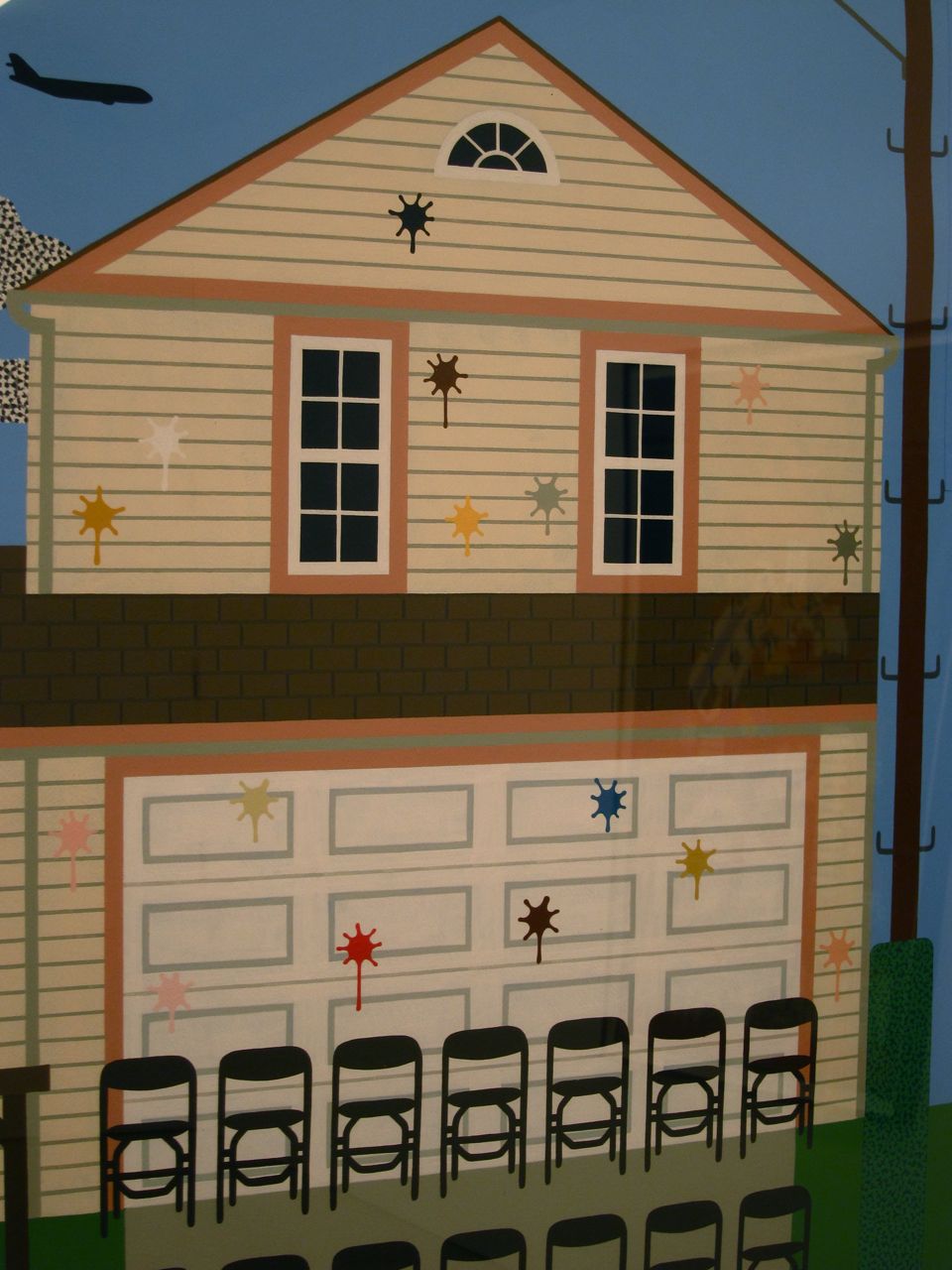 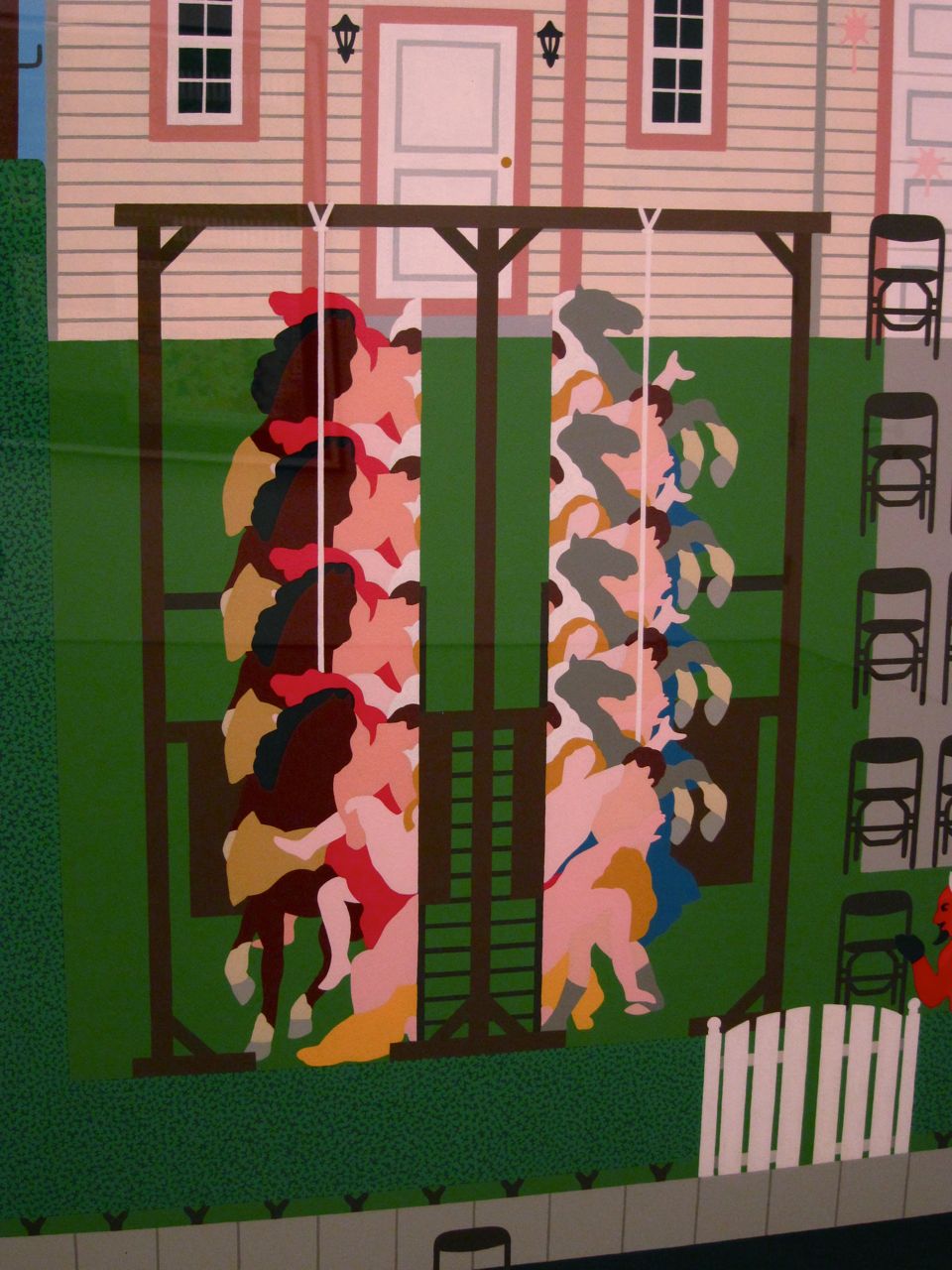 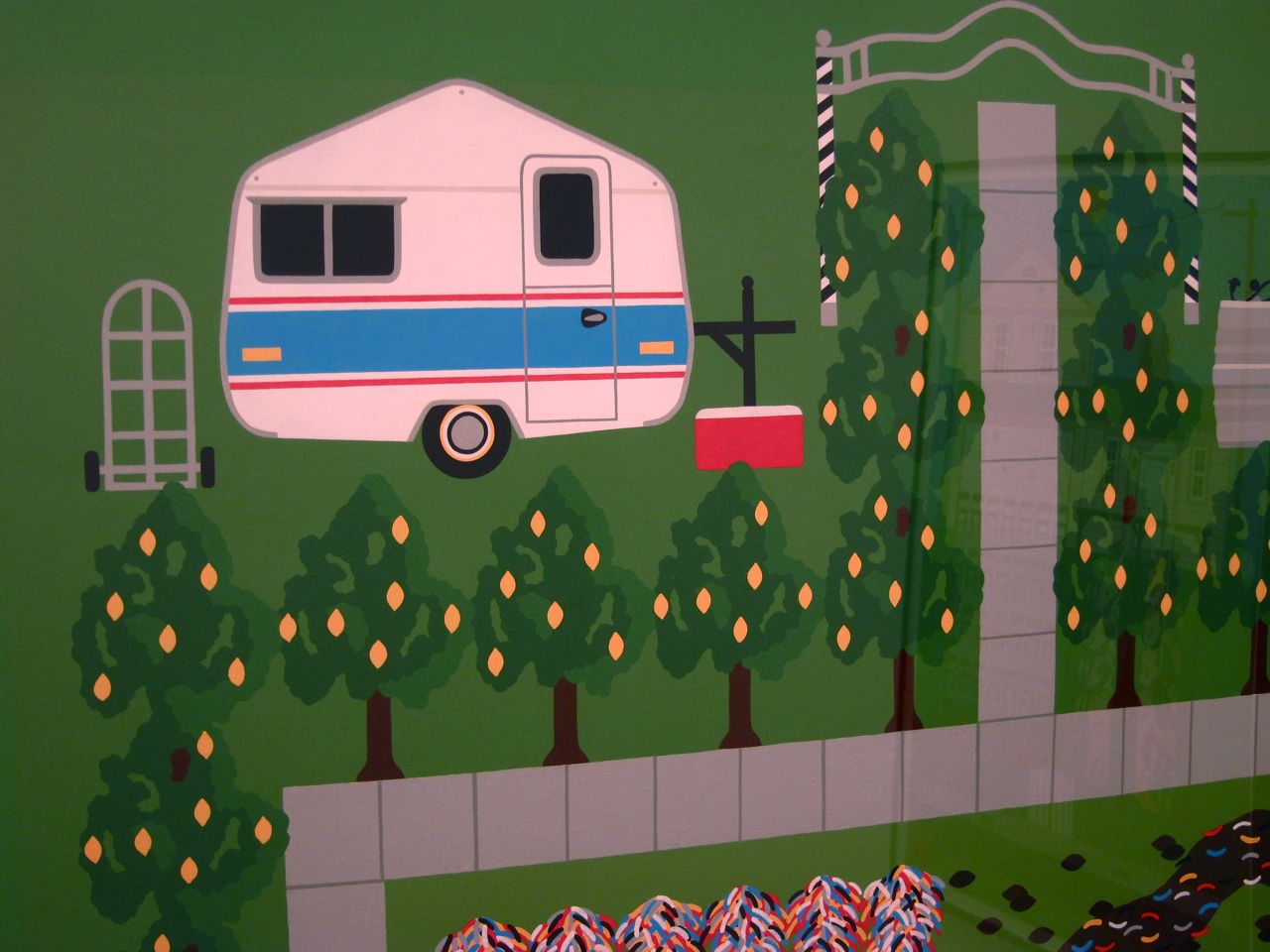 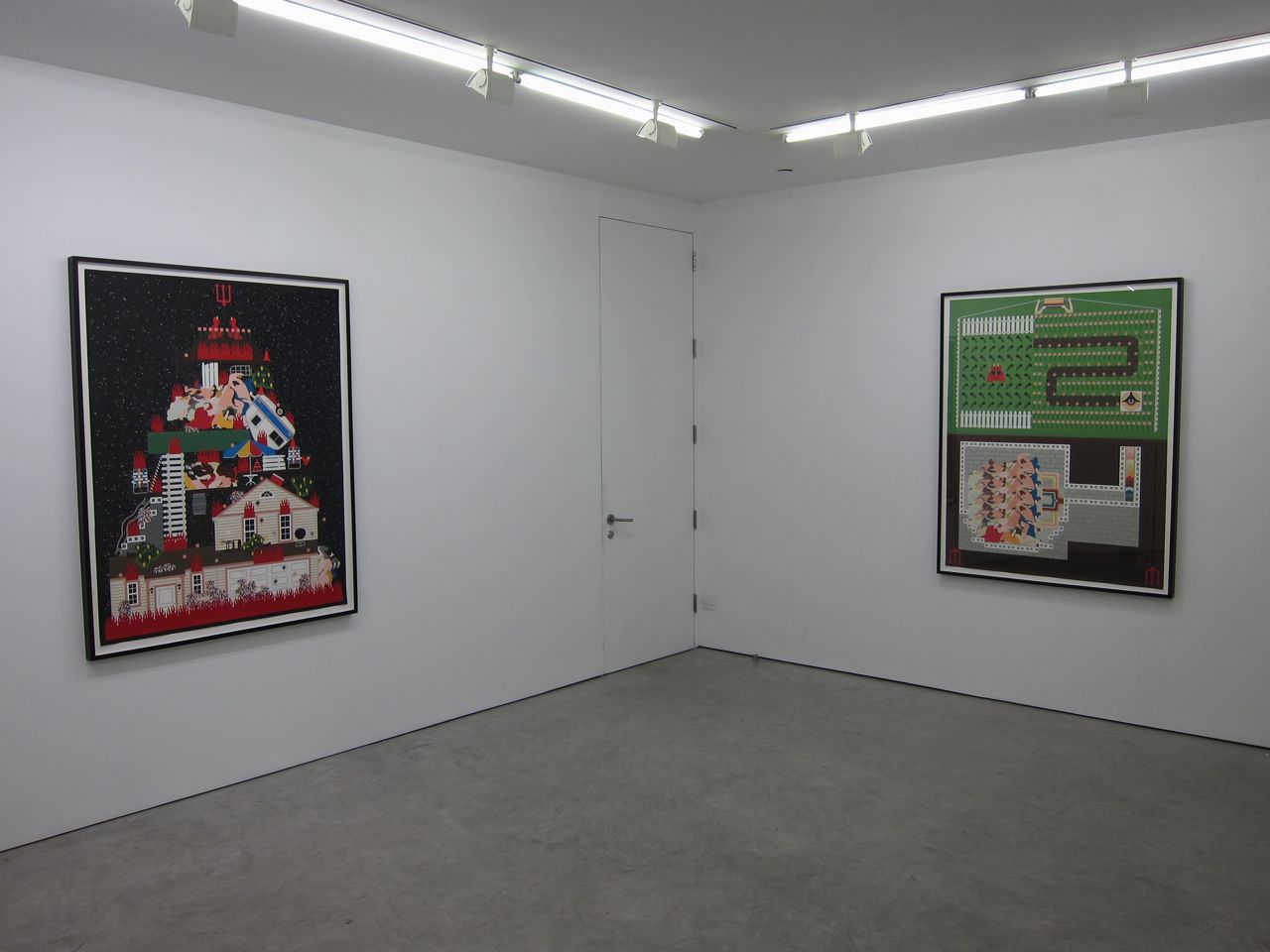