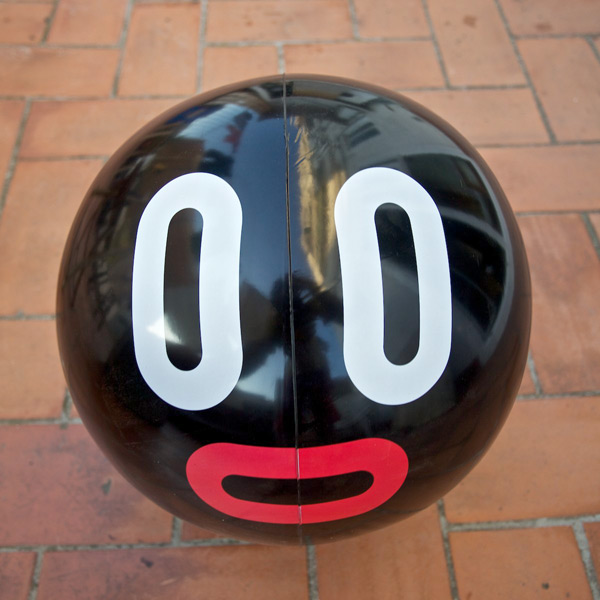 The following article is a guest post by friend of AM, Peter Bengtsen. He wrote this essay for us after seeing the release of Boris Hoppek’s Obama Beach Ball, the resultant opinions that have been broadcast on the internet in response to the artwork, and the political motivations of the artist himself. We hope you enjoy the article, and that it may bring some clarity both to Hoppek’s project, and a context to this work as part of the artist’s output. Make up your own mind about the politics behind this artistic statement, and feel free to leave a comment below.

On November 15th 2011, the Italian print house Studio Cromie released a series of artworks from this year’s FAME Festival. Among the works was an edition of 100 black beach balls adorned with two white and one red elongated circle by the German born artist Boris Hoppek.(1) The works in the edition were entitled Obama Beach Ball, and since the release they have received quite a lot of online attention, with the artist’s political agenda being brought into question.(2)

In the following, I will discuss the Obama Beach Ball as an isolated object, but also contextualise it as an artistic expression in order to point to other possible readings of the work than the accusations of racism, which Hoppek has been met with.

Read on for the remainder of the article after the jump.

Looking at the artwork as an isolated object, it is perhaps not difficult to see why it has sparked quite some controversy. On the iconic level, for many of those who have commented on the work over the past few days, the three coloured shapes on the black background connote the stereotypical face of a black person, depicted in for instance Gollywog ragdolls, and because of this, some have concluded that the artist must have a racist agenda.

Hoppek routinely refuses to elaborate on the meaning of his art, leaving it up to individual interpretation whether the artwork is seeking to problematise the issue of racism, or whether it actually crosses the line and becomes an expression of racism in itself. Judging from its reception, many people seem to think that Obama Beach Ball does cross that line, and if we were to simply take the work at face value (no pun intended) and out of context, I might be inclined to agree that the reading of it as a racist expression has some merit.

However, upon further reflection on the object itself we might also begin to question whether the iconic expression does not constitute such an over-the-top caricature, that it ends up as a parody of the racist’s stereotypical depiction of “black people”, thus turning the racist agenda on its head and revealing its absurdity. This reading is of course not given. It requires an active and critical audience, which is willing to look beneath the surface of the artwork, confident that a deeper meaning will be revealed. This is true in relation not just to Hoppek’s work, but to a great portion of contemporary art.

We might also find it fruitful to look into ourselves and to contemplate whether the work has perhaps caused outrage because it manipulates us through a combination of visual and verbal means (the title of the work) so that, even in this time of political correctness, we cannot help but see the stereotypical “black man’s face” in the beach ball. If this is the case, then surely this says something much more interesting about us as spectators vis-à-vis the artwork than about the artist and his assumed motives. When we call out against racism in this artwork, we are also implicitly calling out against the structures that guide our own perception.

This critical stance on the part of the audience is to be commended, especially if our immediate reaction is followed by some measure of introspection. What is our own role in actively creating the racist reading of the artwork? What does this reading say about us? These are some of the important questions, which the Obama Beach Ball as an isolated object brings to the table.

The point about the importance of the role that the spectator plays in relation to the artwork is central to an understanding of Hoppek’s work. In the 2007 installation Tiro al Negro 800 at the Estampa Madrid art fair for prints, the artist set up a shooting tent where attendees could “customize” their purchased screen print by shooting at it with a slingshot and 8mm screw nuts.(3) The prints were designed as shooting range targets with faces that bore an iconic expression quite similar to the Obama Beach Ball. 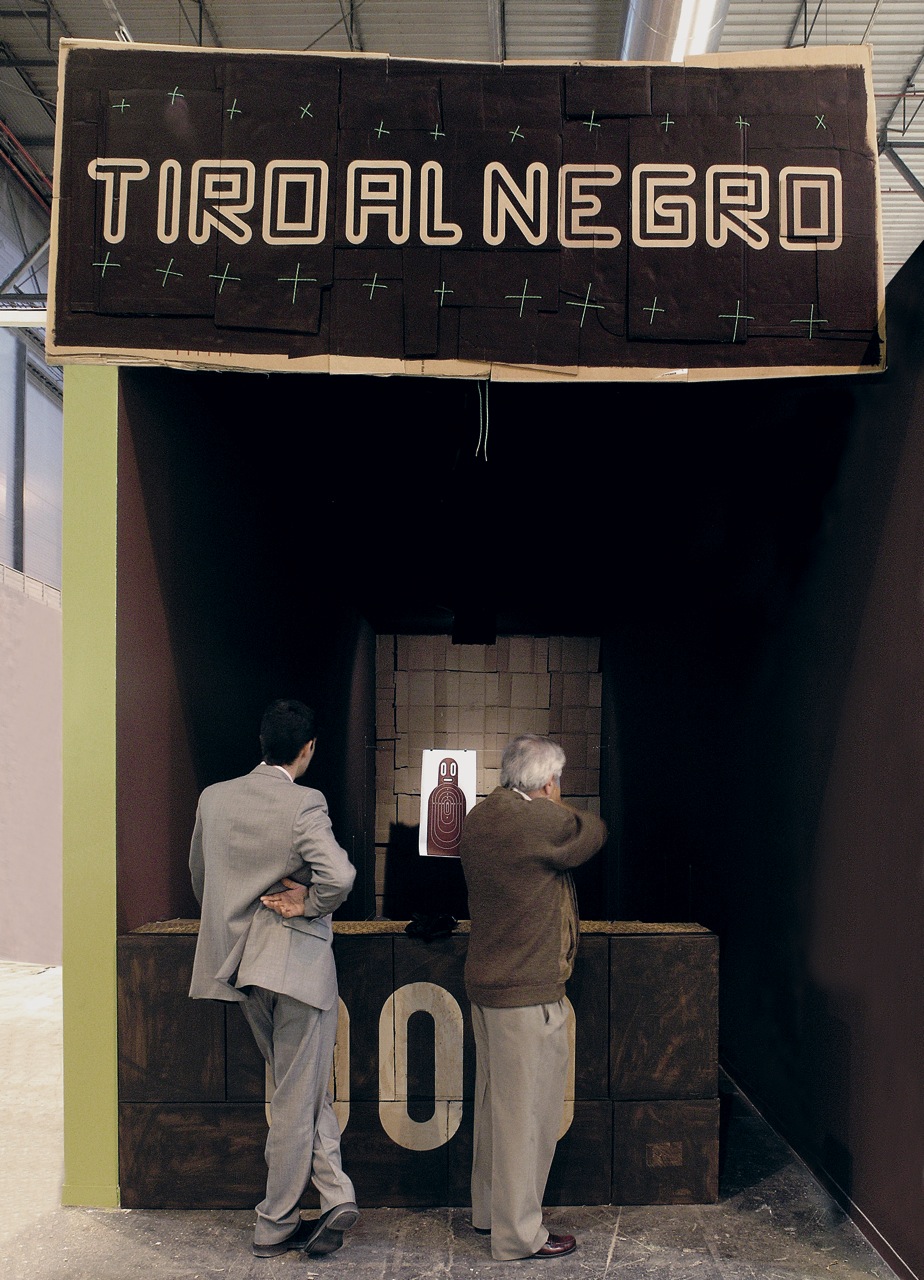 The two works have several things in common. As with the Obama Beach Ball, it could be argued that the iconic expression here serves to highlight and problematise the oversimplification which the racist conception of “the black man” represents, just as it could be said that part of the work’s raison d’être may simply be to provoke people into taking a stance against the racist discourse that the print and the installation seemingly promotes.

But looking at the elements of the artworks that are directly created by the artist can only take us so far. In Tiro al Negro 800 we run the risk of missing an important point if we fail to acknowledge the significant role played by the audience members. The moral dilemma which faces them in the installation is set up by Hoppek, but the (reflecting or unreflecting) choice to take part in the “shooting of the black man” is out of the artist’s hands. An important part of the artwork’s meaning thus comes into being in the way that the audience members choose to interact with the set-up.

In this respect, the work is reminiscent of the 2000 installation Helena at Trapholt art museum by Danish/Chilean artist Marco Evaristti.(5) The installation consisted of 10 fully functional blenders, each of which contained a goldfish. As a parallel to the accusations of racism on Hoppek’s part, the fact that the museum audience could potentially turn the blenders on, thereby killing the fish, led to accusations of cruelty to animals against Evaristti, even though the decision ultimately lay with the audience.

There are many examples of atrocities committed throughout history which are based on this type of reassignment of individual responsibility unto a higher authority, thus absolving the individual of any moral culpability. The tendency was clearly demonstrated in the famous experiments by American social psychologist Stanley Milgram in the beginning of the 1960s,(6) and through the frameworks of their installations, Hoppek and Evaristti confirm that it, sadly, persists as an inherent part of human nature to this day.

Turning our attention back to Obama Beach Ball, there is also a context to the work which is not immediately accessible when looking at the object itself, but which may prove significant to the interpretation of its meaning. The wider context of the artwork is hinted at in the description on the Studio Cromie website, where it is stated that the 100 beach balls for sale “were used in a video made for FAME festival 2011”.(7)

As far as I am aware, the mentioned video has not yet been published. However, the top banner on Hoppek’s website is currently displaying a set of still images which, it can be assumed, are related to the happening depicted in the as of yet unseen video.(8) Here is a selection of images taken from the banner:

Still photos from the head banner on the Boris Hoppek website.

In the images, we first see the artist and his helpers bring a batch of the Obama Beach Ball into the small town of Grottaglie (home of the FAME Festival) in Southern Italy, and we then follow how the balls literally flood the streets of this small community. Given the geographical context, it is not hard to see this as a reference to the increasing number of African immigrants that have taken to the shores of Southern Europe in recent years (a theme which Hoppek has also dealt with in the installation 86 Negritos from 2007), and the happening quite efficiently illustrates and problematises some of the potential aspects of this influx.

On the one hand, the chaos that ensues when the balls are released creates a situation where the locals are invited to play and relate in a positive manner to the new “inhabitants”. On the other hand, from the photos it seems that the locals (especially children) eventually begin to round up and place the beach balls in an orderly fashion, thus restoring the town to normality. In the situation itself this activity is of course innocent enough, but in light of the conceptual context it can be interpreted as having a darker subtext.

All the balls, except perhaps those that have been taken in by a local, are eventually rounded up and placed apart from the rest of the community. 100 balls are subsequently put up for sale through Studio Cromie and (if sold) shipped off to an unknown fate. It is not a far stretch to read the issues of social segregation and deportation into the happening.

Having gone through the context of Obama Beach Ball, I would suggest that looking at one isolated ball makes about as much immediate sense as looking at a snippet of the pink polypropylene which Christo and Jeanne Claude sold along with the limited edition book documenting the installation Surrounded Islands from 1983.(9) Without a conception of the wider context, the meaning of the piece of polypropylene is lost. It only works as a fragment, a souvenir if you will, which references a larger artwork. As I have argued, while Hoppek’s Obama Beach Ball as a standalone artwork does pose interesting questions, the nuances of its potential meaning become clearer when contextualised further.

The point of this entry has not been to argue that issues of racism should not be discussed in relation to Hoppek’s art. Indeed, as I have tried to make clear, I believe that it is an important issue in the artist’s work. Nor has the point been to say that the artwork is unambiguous – contemporary artworks that deal with politics rarely are. But despite its in-your-face nature, I would argue that Hoppek’s work is multifaceted and functions on a more subtle level than that of many other street/urban artists today. And seen in a wider context it does contain a lot of interesting artistic and political aspects, which go well beyond the immediate racist agenda with which it has been labelled.

Article by Peter Bengtsen, Ph.D. candidate at the Department of Arts and Cultural Sciences, Division of Art History and Visual Studies at Lund University, Sweden.