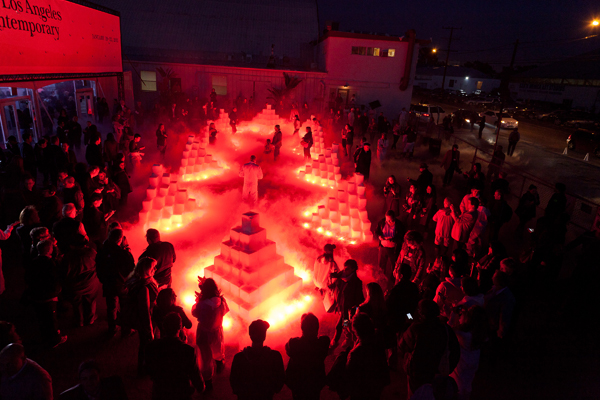 At this year’s Art Los Angeles Contemporary, visitors were greeted at the fair’s entrance with Judy Chicago’s dazzling performance installation, Sublime Environment. As part of Pacific Standard Time’s Performance and Public Art Festival, the large scale installation was created with 25 tons of dry ice, with help from the Silverlake non-profit, Materials & Applications, and a group of 40 volunteers. It encompassed an approximately 30 x 80 ft. environment of 10 pyramidal ziggurat structures, each standing 8 ft. tall with 91 blocks of dry ice, each block weighing 50 lbs. The ziggurats were arranged just outside of the entrance to the fair, slowly dissolving into thick clouds of ethereal fog throughout the weekend’s festivities. At dusk on the fair’s opening night, Chicago and her team illuminated the ice with bright pink road flares, re-creating the artist’s 1968 performance piece, Disappearing Environments.

Disappearing Environments was originally staged in 1968 by Judy Chicago, Eric Orr, and Lloyd Hamrol in a large shopping center in Century City, CA. In the midst of what the artists felt was an increasingly consumer oriented landscape of large and imposing structures, the piece presented a critique of the rise of consumerism and its subsequent commercial development. At a time of a raised interest in Feminist art, the piece also contained undertones of a feminist critique, its dissolving square blocks suggesting the potential of a disappearing patriarchal society.

AM spoke with Materials & Applications Co-Director, Oliver Hess, to talk about the project and his experience working with feminist icon Judy Chicago. See the full interview after the jump… 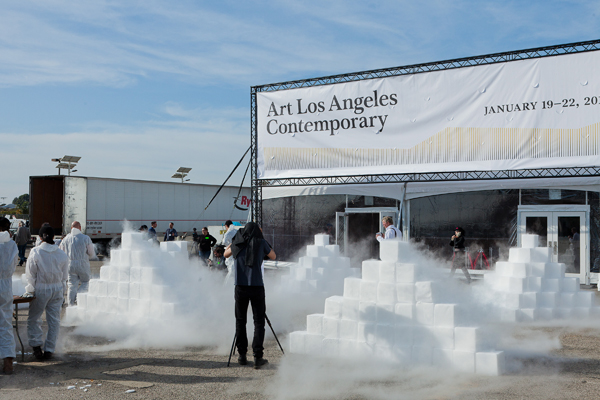 Arrested Motion (AM): How was your experience working with Judy Chicago? What was your first meeting like?

Oliver Hess (OH): I was told she would not like me, so I wore a very low cut v-neck purple American Apparel t-shirt to our first meeting to make her feel comfortable and to show that I do not take myself as seriously as it may seem from my public persona. She wore a purple t-shirt, and a pair of cutoff purple denim shorts with purple rhinestones. She also had purple Converse on. She and her husband both wore purple nail polish and he had purple framed glasses, and probably more purple apparel as well. We got along really well. Jenna Didier, my partner and co-director of Materials & Applications joined the team later but gelled with Judy immediately and they got along very well.

AM: Who worked on the project? What went into the experimentation and planning process? 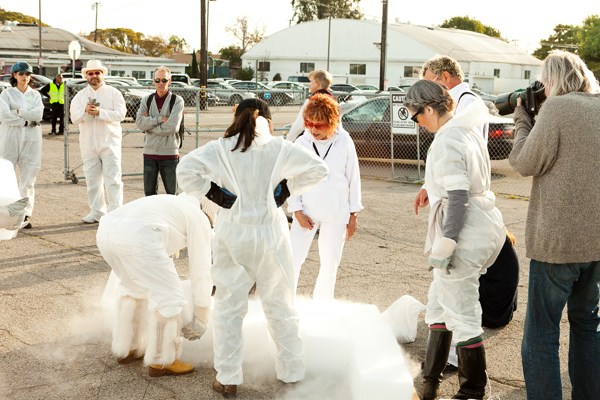 AM: Can you give us a brief description of the installation?

OH: 25 tons of dry ice – 91 blocks per ziggurat, 50 lbs each when they are first put in place – 45,000 lbs total and road flares. It’s an amazing experience to behold. The sublimation leaves you with these totally alien forms the next day. I see it as an accelerated erosion of what we understand as the controlled monolithic reality of today. It references architecture, consumerism and community, as well as art history.

AM: When Judy Chicago first staged this piece in Century City in 1968, it addressed the changing environment as a new consumer-based landscape was emerging in the area. In its new context at an art fair, do you feel it can be seen as a statement on the art world itself and its changing environments?

OH: I personally see the installation phenomenologically. It is about the material going from a solid to a gas, the mist filling your vision, the smoke and the chemical fire of the flares overwhelming your senses so you need to retreat to breath. The constant transformation of space and the invitation to re-explore it again and again and to absorb the experience because it is so rare and fleeting. It is a celebration of the wonder of nature, our ability to control it, and to appreciate it. 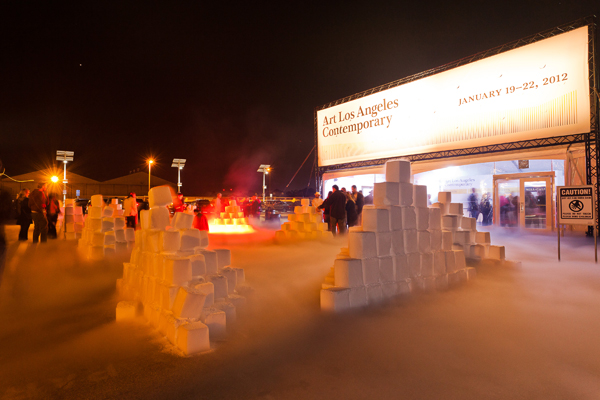 AH: With the advent of art fairs, and their subsequent celebrity sightings and vip parties, do you feel art is becoming more accessible or less accessible? Do you feel accessibility is relevant to the art conversation

OH: Art fairs are for the trades, if that is how the masses are exposed to art, it devalues the art. It really should only be for people who are buying and need the immediacy of having all those choices at once. The environment is not like a gallery or museum. It is however a good way to network and to be perhaps exposed to new artists and to then check out their work in a proper environment later. I think our working at the art fair was a good balance of opportunities for everyone, the airport was a great site, and having so many people who understand the context and value of the work was great. It was publicly accessible and practically in the street which was cool. The mist from the dry ice was able to blow all the way across the parking lots and with all the headlights it looked magical. Accessibility is important to art, but not to art fairs. I would prefer something like Lange Nacht to solve that issue.

Photos by Scott Mayoral, courtesy of Materials and Applications.