D*Face has been a leading light of London’s street art scene for more than a decade and was a key member of the Finders Keepers crew that really kicked off the Shoreditch street art activity.  On occasion of his first solo London show in 5 years – New World Disorder – it is fitting to mark a seismic transition as D*Face, the Stolen Space Gallery, and all D*Face’s well-known space sharing cohorts up sticks to pastures new and as yet unannounced.

Outside the gallery the visual puns begin, a craftily mounted airborne TV has crashed through an upstairs window and is plummeting down the paint splattered facade. Hands up – who remembers another well-known artist who did the TV out of the window gag?

Many people who have frequented Stolen Space gallery over the years will be familiar with the tagged and stickered, yet mysterious doors immediately to the right of the gallery. Indeed, quite often a photographer would be genuflecting to some new piece by Dscreet, Nylon, or C215 in that rank smelling doorway only for the portal to fly open and some bowed-headed, anonymous street artist would breeze out. What went on in there we wondered? What did the place look like? Well, in this D*Face show, all is revealed as the exhibition sprawls from the street to the Stolen Space gallery, in those doors, up a flight of stairs, and into the labyrinthine D*Face studio.  At first sight, lots of tagging, stickering, stenciling, chucking of paint and drinking of coffee appears to be the answer.  Paint and tags on every surface overwhelm our senses, our original list of unknowns is updated with the additional query: when did these artists actually do any work? 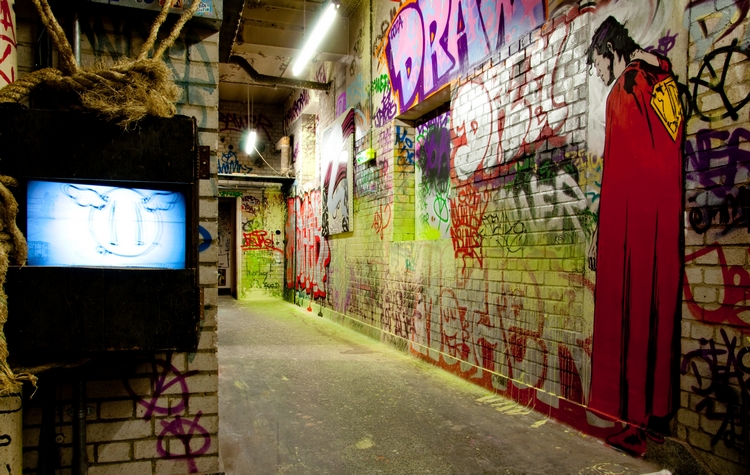 The regular Stolen Space gallery room off Trumans’ Yard contains a display of sculpture themed as a tribute to pro footballer/turned American soldier Pat Tillman, who was killed by three bullets through the head in Afghanistan in 2004 in a friendly fire incident. Tillman had given up a lucrative career in pro football to do his patriotic duty, but seemingly became opposed to America’s invasion of Iraq and the military approach to international policing. Furnished with that scrap of information, we start to make sense of the room’s mash-up of sport and war.  The intersection between sport, war, defeat, victory and death is underlined by marking out the gallery floor in stark American football pitch markings. 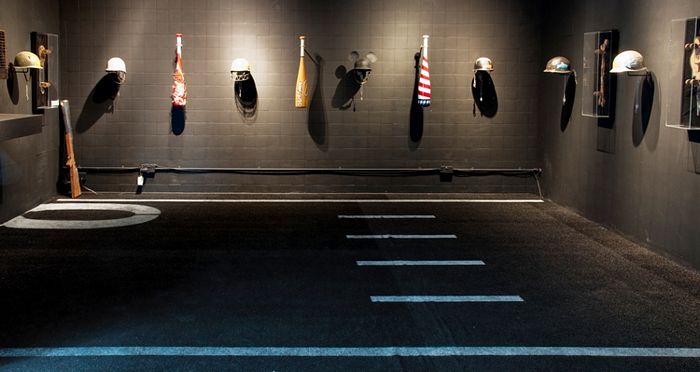 Bullet-riddled helmets are pimped up with chin protecting grills, like an American footballer’s helmet. Baseball bats are given not just the pop art color treatment, but barbed wire and infantry weapon status. The faux soldier’s dog tags hanging from each of the helmets are actually D*Face wing pendants. 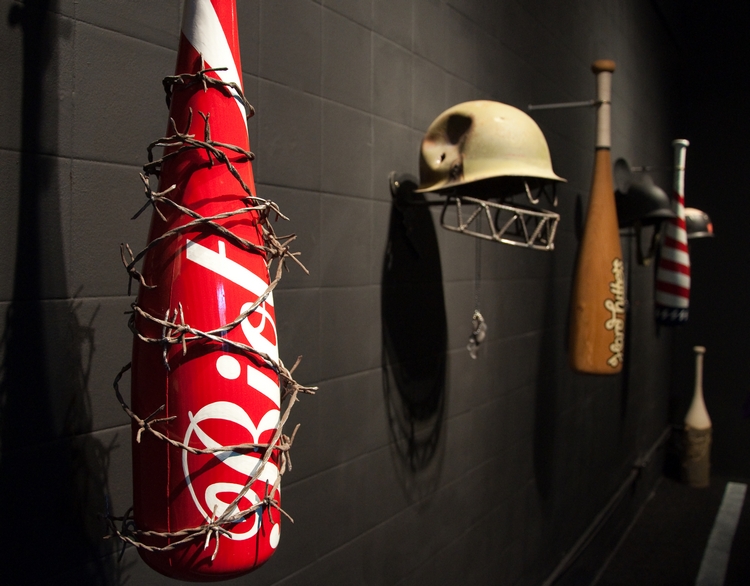 We recall being blown away by D*Face’s illusion room at the 2008 APOPcalypse show. In the backroom realms of D*Face’s studio is a work room set up for screenprinting, which recreates that “where do walls end and the floors and ceilings begin” disorientation.   The 2008 illusion room was based upon exploded D*Dog fragments, but this time the illusion is based on dots, perhaps pointing at comic book benday, beloved by Roy Lichtenstein. The Pop artist legend is undeniably a major influence in D*Face’s work. 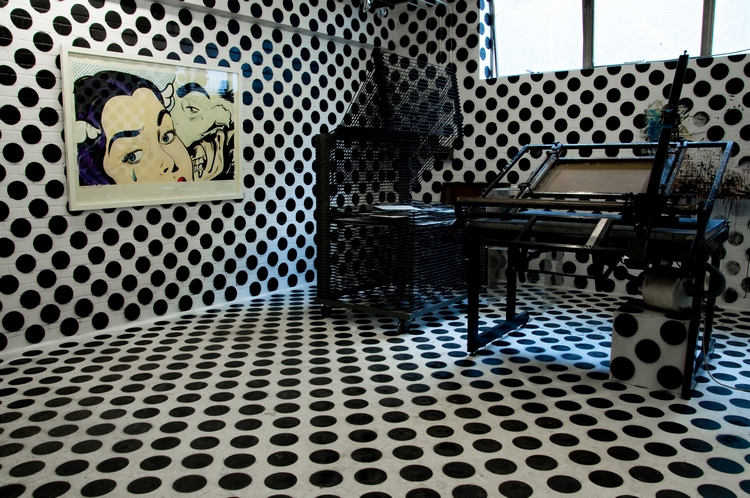 What appears to be a quite small studio room is entered through a tagged up corridor lined above head height with a guard-of-honour display of skateboards, those on the right all painted by D*Face and on the left by other artists.   Inside this studio room worktop surfaces and shelves are cluttered with the accumulation of over a decade’s worth of creativity and misdemeanour. 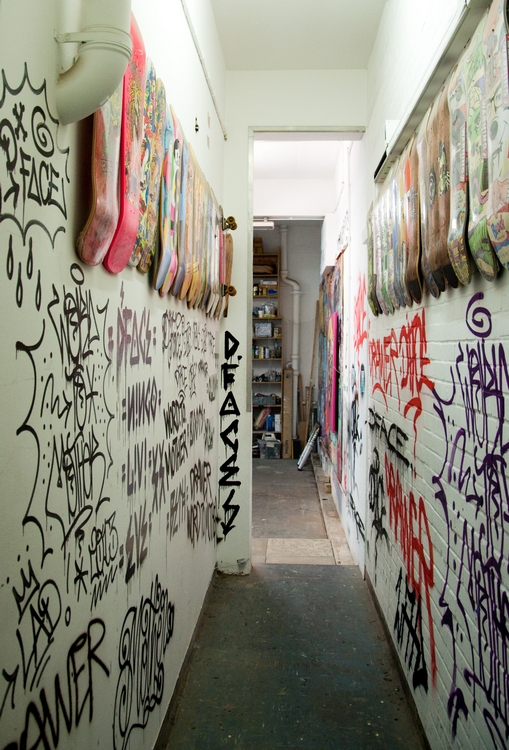 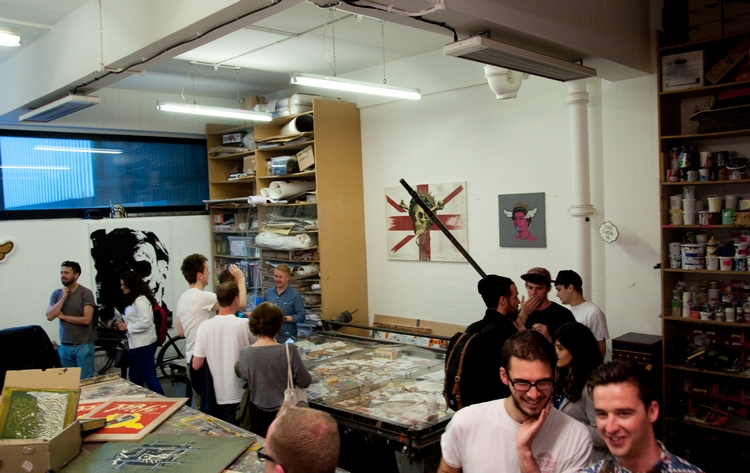 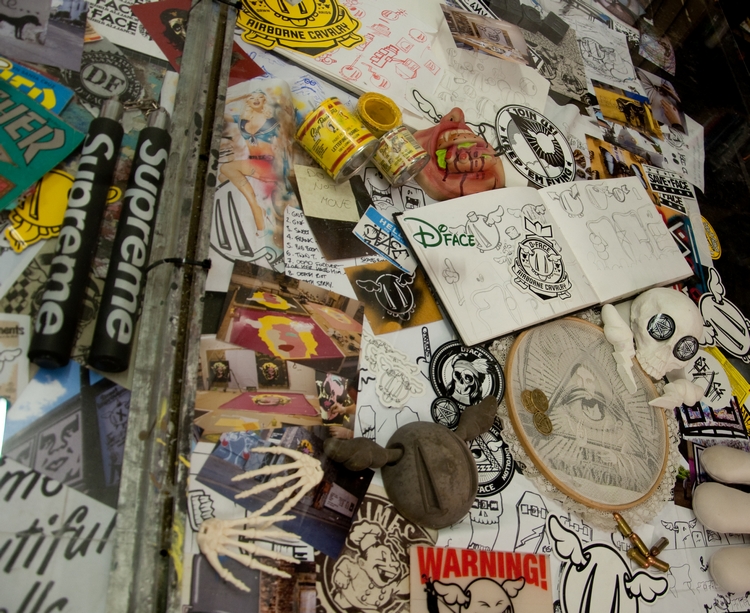 Questions of mortality permeate the art in the main hall of D*Face’s show. Death himself has been burning up the gallery pulling doughnuts on his Yamaha motorbike while all around grieving widows mourn their zombie lover’s lack of feelings. 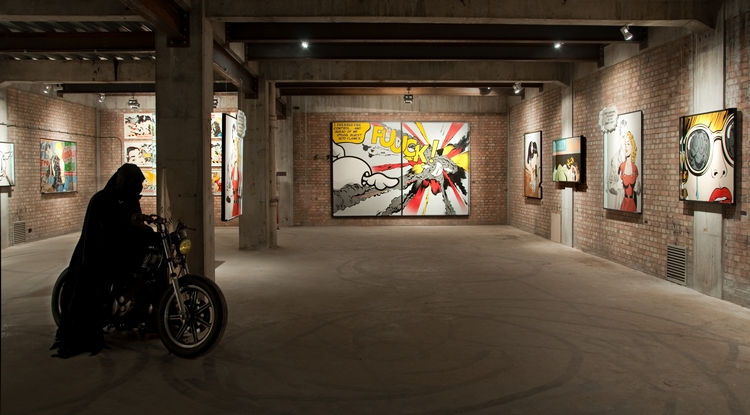 The recent Tate Modern Lichtenstein retrospective was laid out with different rooms categorized by different techniques, or “tricks” as we non-artists call them. As mentioned, D*Face is clearly a fan of Lichtenstein and devotes himself to a macabre twists on the Lichtenstein devices. Several canvasses incorporate reflections in the detail, very much a la mode Lichtenstein. 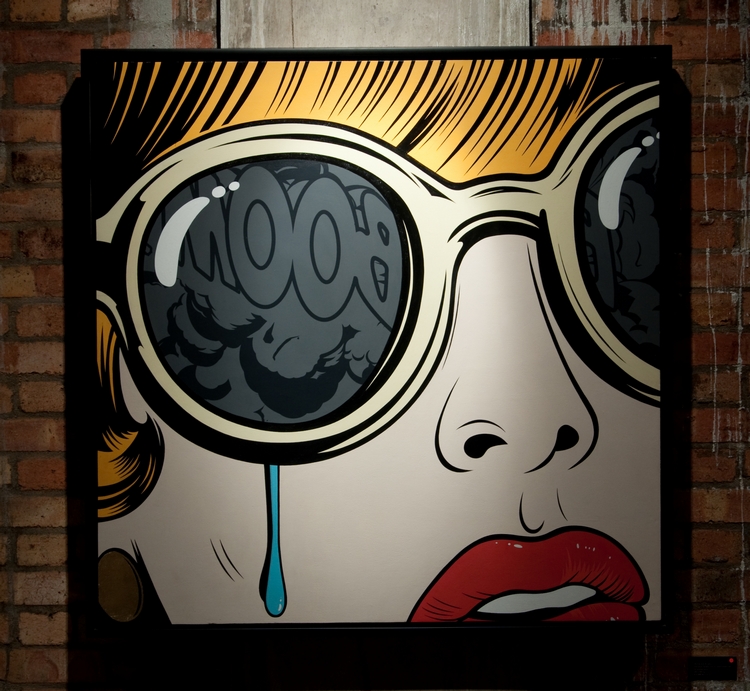 The scraper on the Scraper Dog canvas has reflections on the blade and is also cleverly arranged with the track of the scrape actually cut out of the canvas, yet the curling scraped material is a painted illusion of a curled piece of canvas. 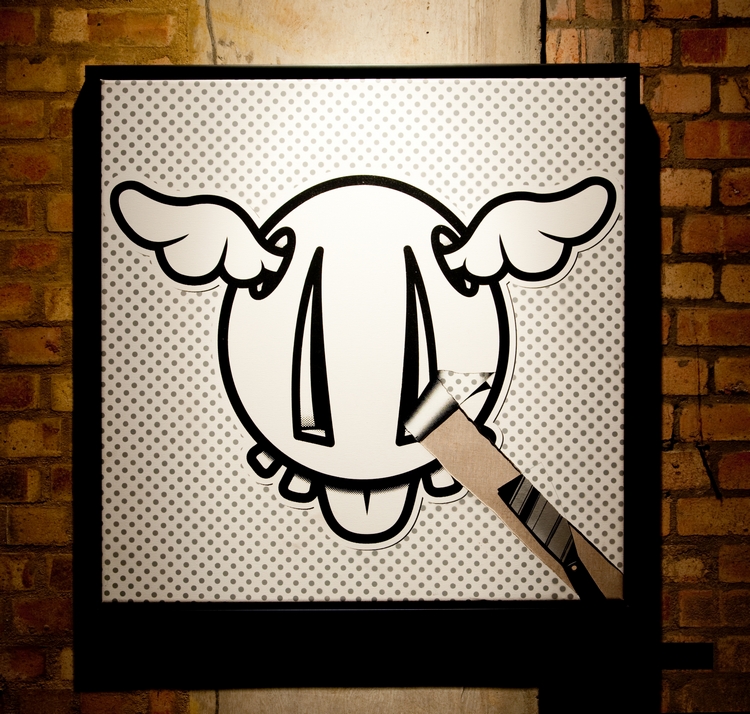 Lichtenstein also studied the optical effect of looking at benday dots through a magnifying glass. D*Face applies those same lessons to a canvas of his signature D*Dog studied through a magnifying glass. A photographic image of the canvas may confuse the eye into thinking that D*Dog has been applied as a poorly stuck on collage element, but that shadow is painted too. 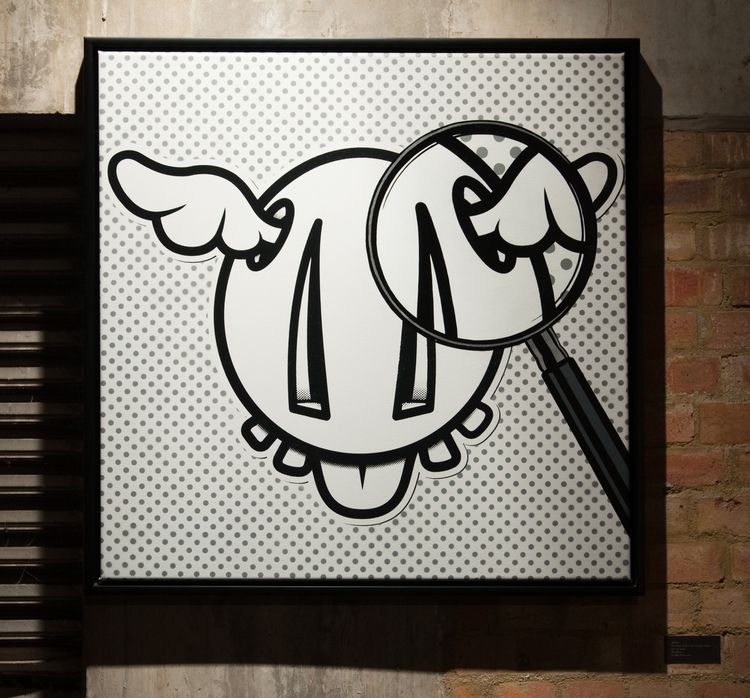 The two most spectacular canvasses feature dramatic explosions – bright solid colors, and in the case of Fuuck, D*Face’s interpretation of Lichtenstein’s Whaam, staccato comic-style speech. For Whaam, Lichtenstein modified the original source comic strip, whose diagonal trace of bullets he made horizontal. D*Face has gone back to the diagonal shot. Big Boom also features extensions beyond the canvas boundary which Tate Modern decided was sufficiently noteworthy in Lichtenstein’s case to merit a whole room. 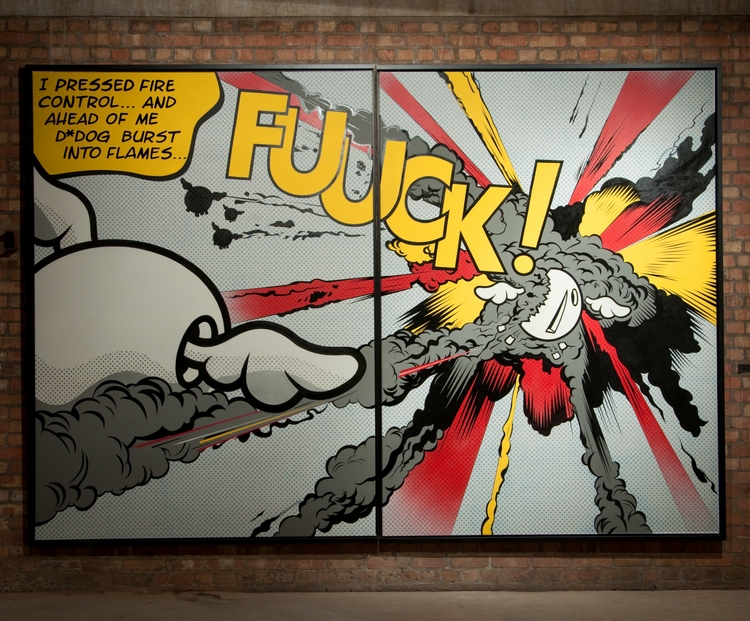 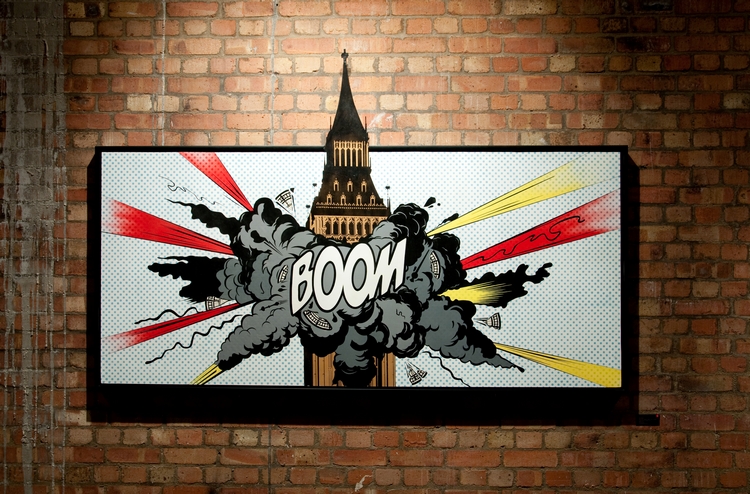 Lichtenstein was a phenomenal re-interpreter of many other artists and many scenes from comic books. Re-interpreting his work is no embarrassment! D*Face’s work is pop eyecandy, mouth-wateringly delicious in every aspect. Something else worth mentioning is the quality. Every aspect of composition, finish, framing and even fixtures used for mounted baseball bats and helmets is without blemish – a rarity in urban art’s usual “yeah, rough it up for edginess” modus operandi. Even the display of retired stencils, which appear not to be for sale, are superbly framed – not a small investment! 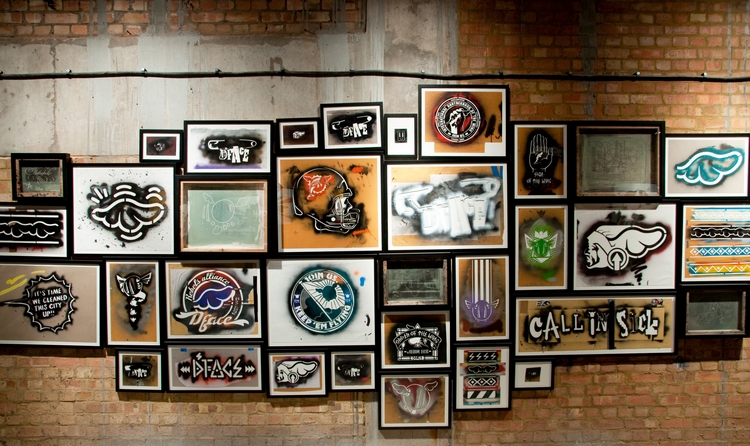 We haven’t seen a show of this scale, quality and appeal for a long long time. Definitely check it out, and while you’re there say taa raaaa to a space which has hosted many great shows and a ton of memorable evenings. 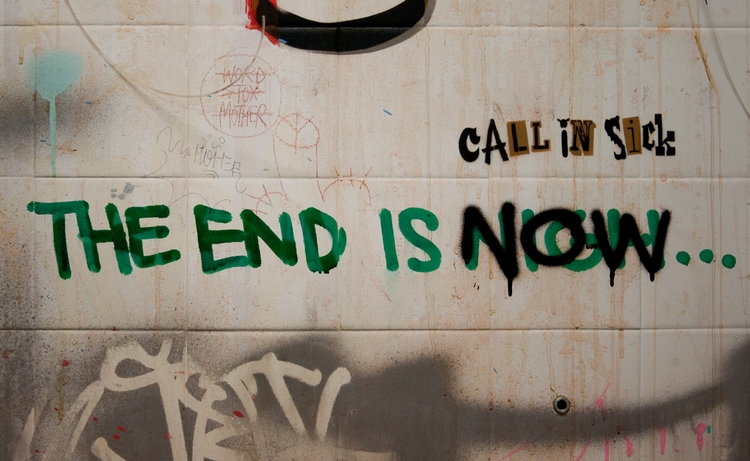 PS – and the answer to the great artist who did the throwing the TV out of the window thing question was….Keith Richards.

The above article was guest written for AM by NoLionsInEngland of Graffoto blog.