Pittsburgh based artist Mike Egan has a unique voice and visual vocabulary. With imagery steeped in blood, containing devils, skeletons, death and murder, his paintings tell the stories of those who have passed, those left behind after one’s passing, the mourners, the lovers, the hurt and the relieved.He has a solo exhibition We Bleed Black Blood When We Die Dark Deaths opening on October 3rd at Portland’s Breeze Block Gallery. AM caught up with him for a glimpse into his studio and an interview. 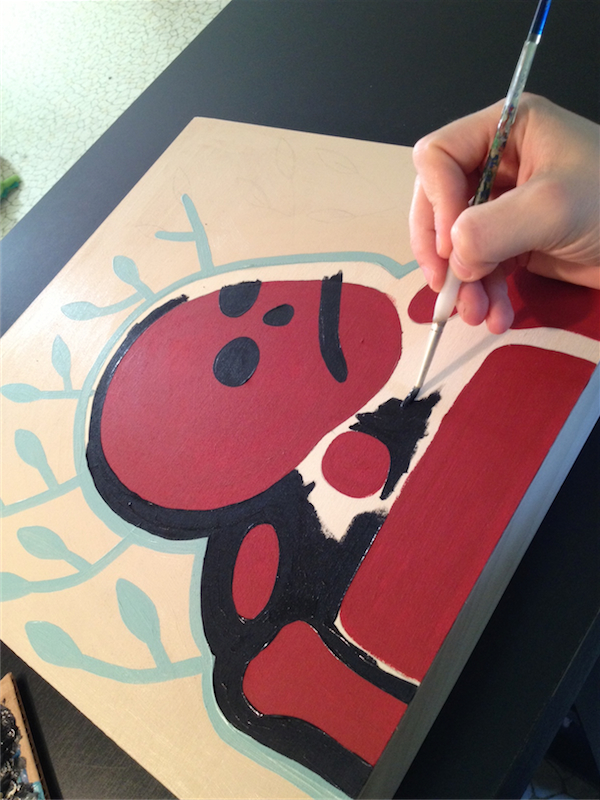 Arrested Motion (AM): So first off Mike you studied fine art at Edinboro, and printmaking was the main focus of your work. Obviously painting is your main concentration now, but what triggered this change of direction and did you have to re-train yourself in any way?

Mike Egan (ME): I mainly focused on wood block printing in college and after school I found myself without the supplies that I needed to continue with printmaking. I did have one painting class in college but it was mostly still lifes and nude models. When I got back to Pittsburgh, I had an obsession with Basquiat and sort of took on his style. My paintings were not good, but the subject matter of death and dying was there. It wasn’t until I was working in funeral homes that I looked back at the clean lines of my woodcuts and developed my paintings into what they are now. 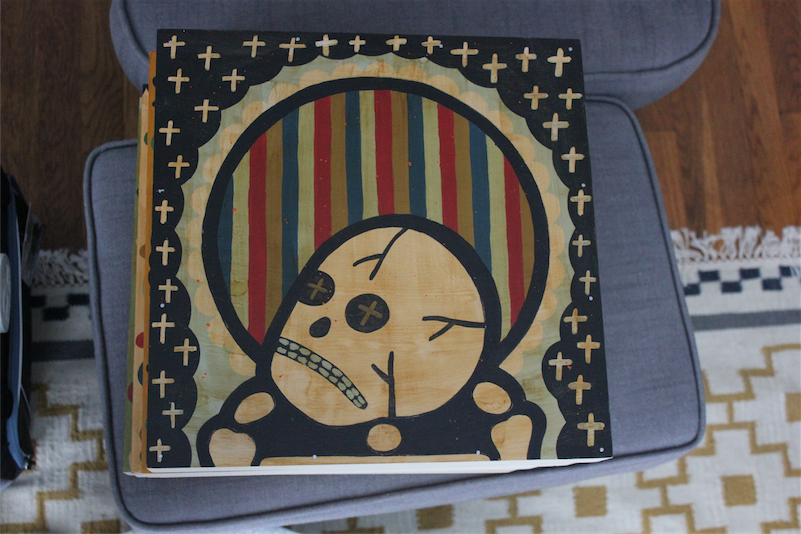 AM: A lot of your inspirations and influences seem to be very apparent in your work. Where did your fascination with Dia de Muertos imagery come from?

ME: It was the prints of Jose Guadalupe Posada that got me interested in Mexican art. I’ve always had a fascination with Death and Dying so I think the two influences led me to reading up on the Day of the Dead. I feel like it influenced my earlier work more than the art that I’m making now. 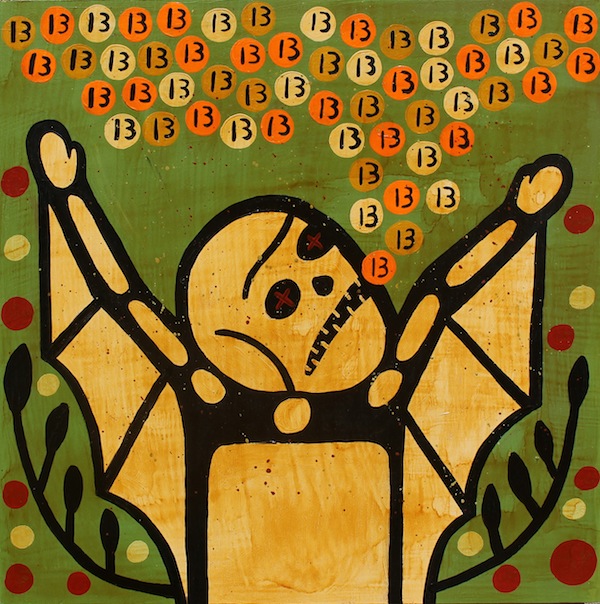 AM: There’s also a strong influence of German Expressionism apparent in your work…

ME: Yes. Kathe Kollewitz is one of my favorite artists, as well as Otto Dix and Max Beckman. They again were introduced to me when I was learning about printmaking. I think that’s where I fell in love with those “dead eyes” that are now prominent in my own work. 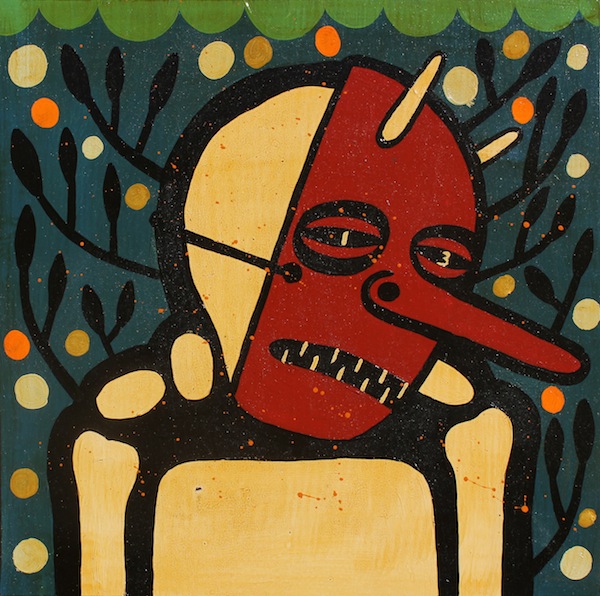 AM: Your role as an embalmer and funeral director shines through in your work. With you being surrounded by death, you still chose to further immerse yourself in it within your painting practice. Are you still working that job? Also, tell us a little about your studio practice and how you work – I have visions of you putting time in at the funeral parlor and cranking the art out amidst the corpses – has that ever happened?

ME: I worked in funeral homes for about five years total. I was always on call to do removals from hospitals or nursing homes, so this allowed me time in my apartment to sit and paint while waiting for my phone to ring. I decided that I couldn’t do both the art and funeral home work as they are both demanding jobs and require a lot of time. I work a manufacturing job now, about 30 hours a week as well as 40 hours in the studio. I paint upstairs in my home, usually to music or with a movie on. I tend to have post-it notes with me wherever I go so that when I get home I can look things over and build off of small sketches. I tend to work pretty fast, sometimes completing one or two paintings a day. 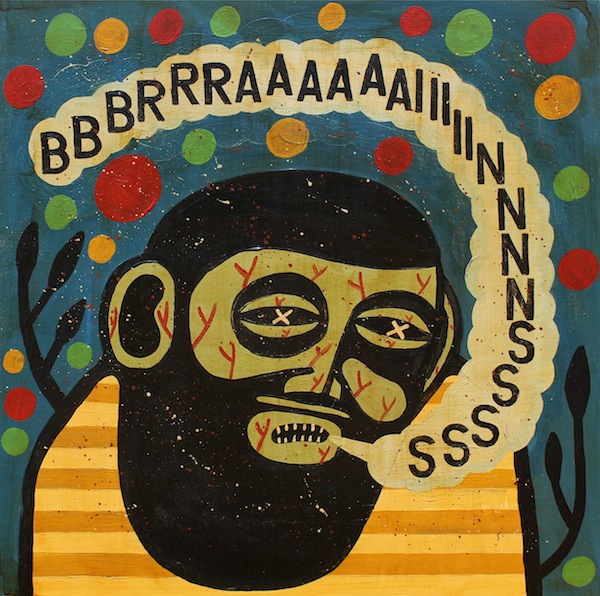 AM: The blocks and coffins you paint are a great addition to your painting forte. Do you have plans to develop these ideas further?

ME: Definitely, I like the idea of painting on found objects. I’d like to start to create wooden sculptures somehow with blocks or doing wooden figures and painting them. 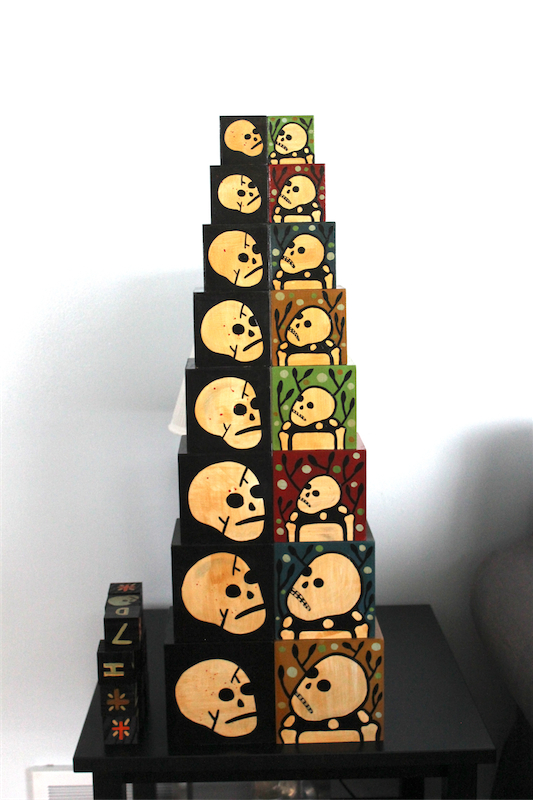 AM: You seem to be very on top of your whole social media thing and never short of opportunities to show your work. Do you think that social media has played an important role in your development as an artist and people’s awareness of your work?

ME: Yeah, definitely. It all started with Myspace, that’s when galleries and collectors around the country/world started to see my work. I think that sharing pictures of my studio and my paintings lets people get to know me better as a person. I’ve shared personal matters like my divorce with people on Instagram and Facebook and they’ve seen the artwork that has come from that. I really like to create special small works for collectors and sell them specifically on Tumblr or Instagram, I think this allows people the opportunity to start collecting art without the large price tag and if I can get people to start collecting art then I feel like I’ve achieved something. 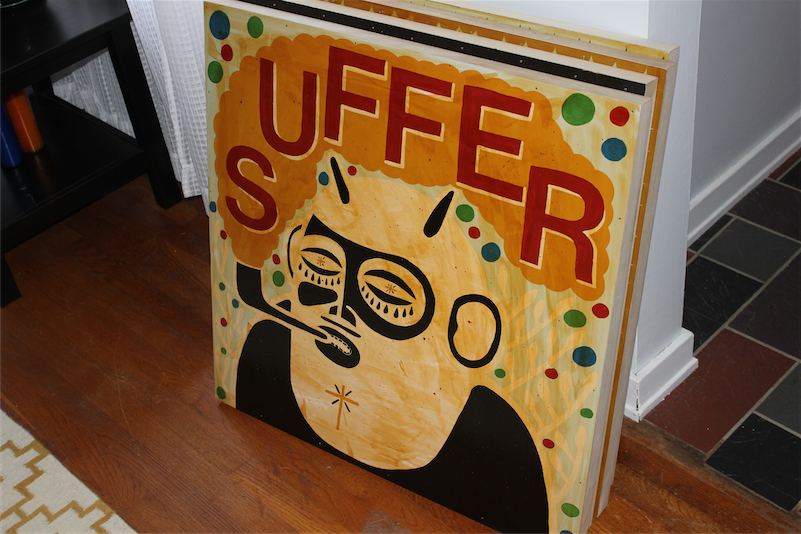 AM: I guess a lot of artists find it difficult to manage the whole self promotion thing – as well as the business side of things, but you seem to have it pretty much nailed down. Do you work alone or have anyone assisting you?

ME: I’m still learning how to sell my art, social media has been really good to me. Ultimately getting the images out to people is what sells the work. Sometimes I feel like I can’t paint fast enough. I do everything myself, from promotion to painting to framing to packing the work. 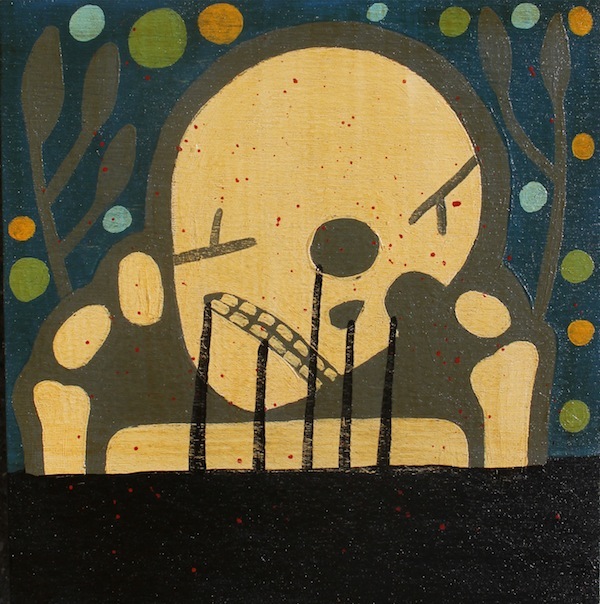 AM: Would you ever consider working with an assistant to help produce your work?

ME: I definitely think that it’d be great to have an assistant to help me build frames and finish my work so I can concentrate on painting full time. But I’d never want someone else painting my work for me. 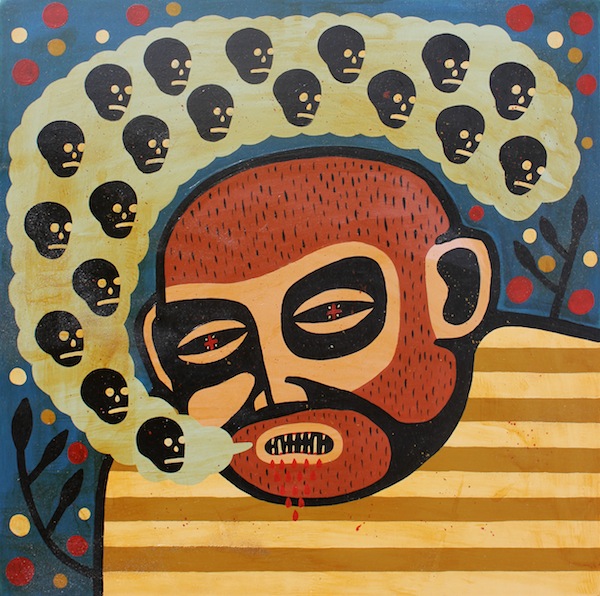 AM: You’re heavily tattooed – have you ever given anyone a tattoo before? I’ve seen quite a few pictures of your imagery that people have had tattooed on them – what sort of feeling does this give you to see someone making such a personal statement using images you created?

ME: I have never tattooed before, I think it’d be cool to learn how to hand poke tattoos though. There’s that sense of folk art or hand crafted art when you remove the machine aspect. I love that people get my art tattooed on them, I guess it makes me feel like I’m doing something right. I want everyone to have Egan death tattoos!! 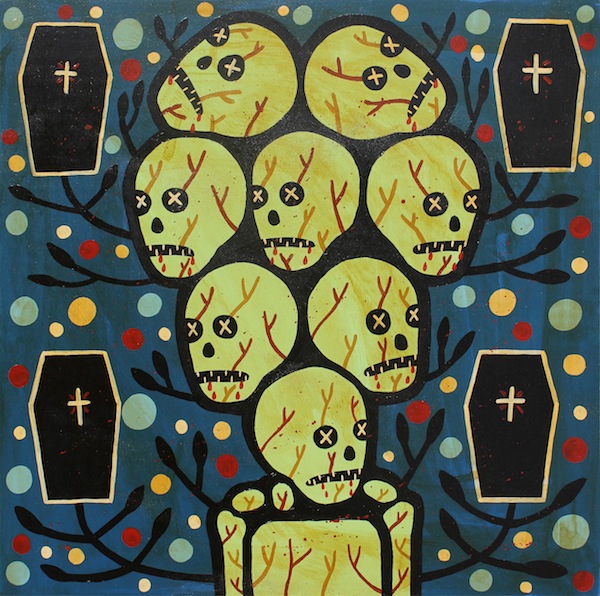 AM: It’s topical that you are gearing up for a solo exhibition in October – the witching month! I guess you are not short of subject matter for this upcoming exhibition. Can you tell us anything about your plans for the show?

ME: Most of the work will be of course Halloween based. It’s 41 new hand painted wood panels, 4 sets of death blocks, 4 hand painted coffins and two sets of stackable death blocks. The Death stacks are something new for me. I found children’s blocks on Ebay, sanded them down and created my own blocks. I’ll also be painting a big Halloween Death Devil in the gallery to watch over everyone. 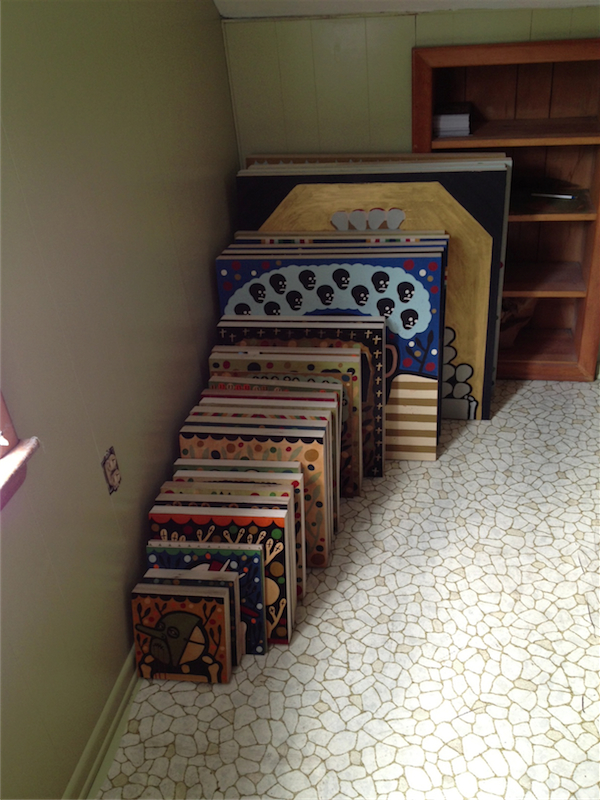 AM: What else should we look out for with regards to future projects? You’ve recently released a book and some vinyl figures…

ME: Yes, I really love working on the vinyl toys, I’ve gotten to work with great people like Dov and Sarah Jo from DKE toys, Amy and Luke from Lulubell Toys and also Frank Kozik. I’m working on some custom hand painted toys that will be released at Designer Con in November. I’ve also got some other shows coming up, including a solo show with Stranger Factory in the spring. 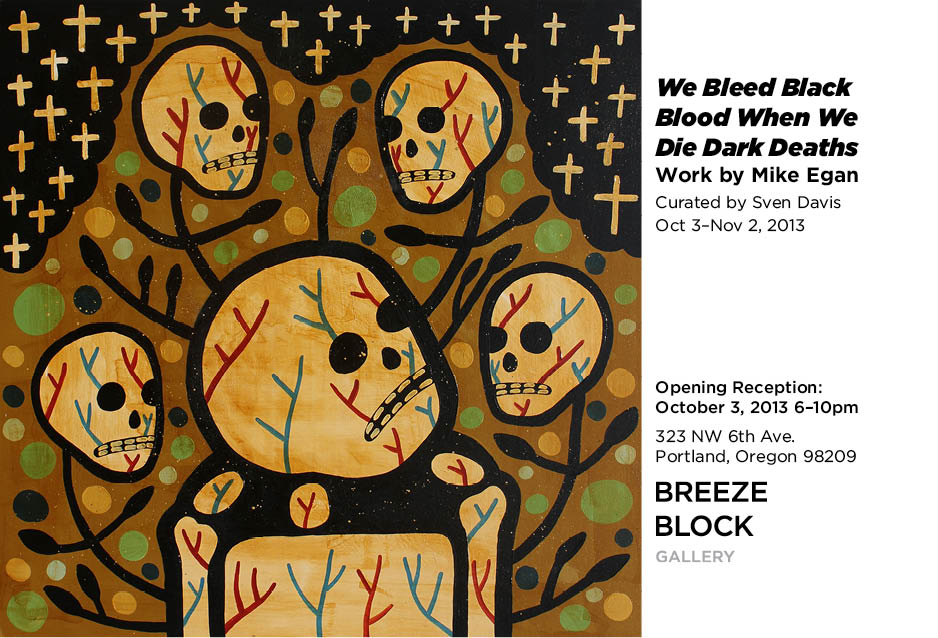 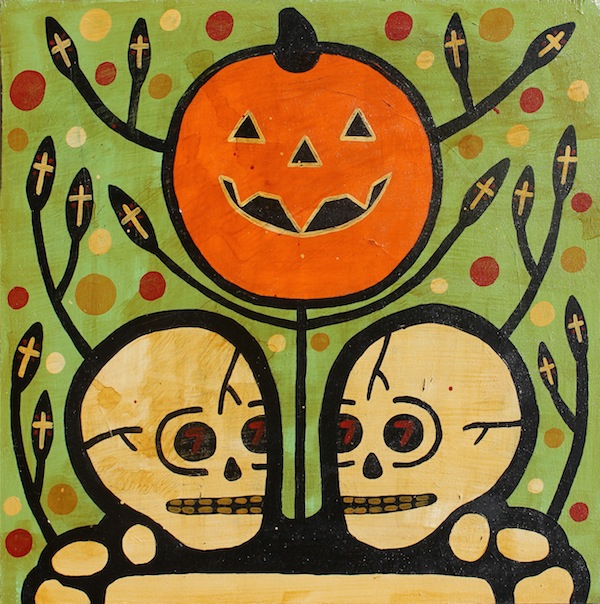 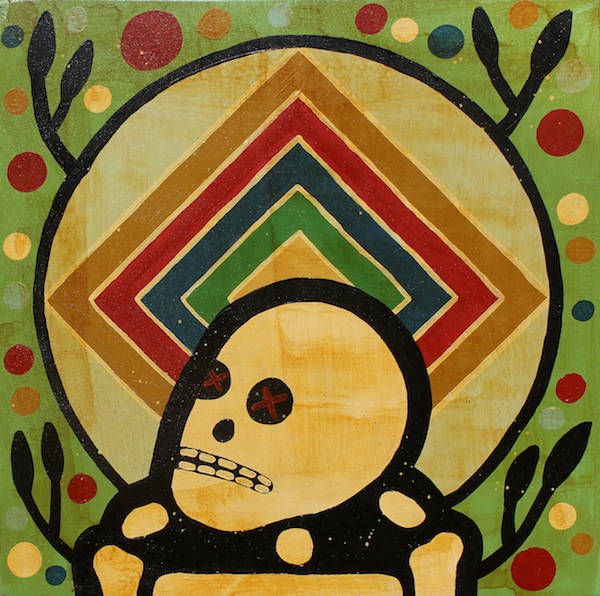 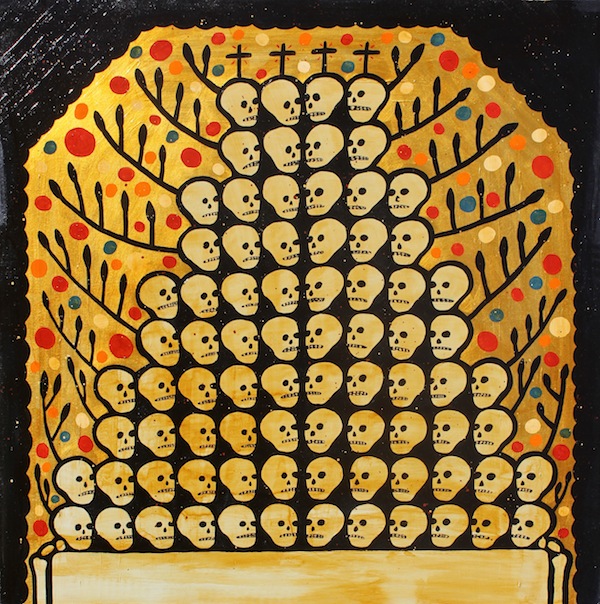 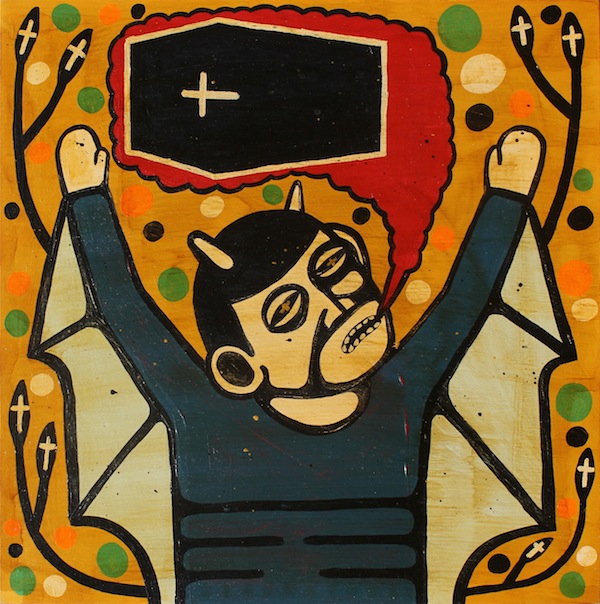