Editor’s note: This post was guest written for AM by Alex Ellison. Having seen Alex’s photography captures of the work by these two prolific street artists over the years, and his expert knowledge of the historical context of their work, there seemed like no-one better than Alex to cover this exhibition for us even though we’d made the trip to London to see the exhibition ourselves…

Last weekend saw the opening of Drifters, a joint show of new work by Sweet Toof and Rowdy, following on from their show in Bristol earlier in the year (covered). This time the work has a more focused theme, with a lot of Sweet Toof’s pieces in particular referring to the railroad and hobo life from the beginning of the last century. His more traditional-style paintings are now set in train yards with the trains themselves featuring the very graffiti that he frequently paints in the streets. He has also painted an array of signs which are grouped together forming a visual spectacular as you enter the gallery. He has used a variety of fonts on found wood and metal which have been deliberately aged, giving a sense that you could be looking at a wall of old signs in an antique store, with subtle references to his outdoor graffiti work. They depict slang words and sayings derived from the golden age of the hobo like Canon Ball (fast train), Creep Joint (brothel) and Nailed (to hop a train). 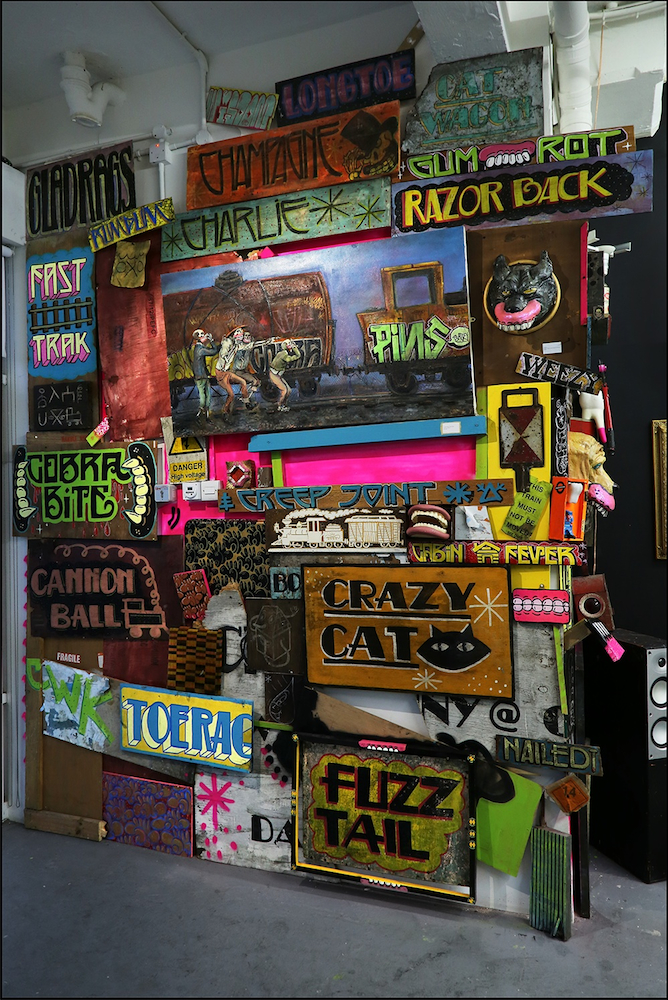 In one Sweet Toof painting, Red Handed, two well-dressed railroad workers apprehend a graffiti writer (the artist himself?) who has just sprayed a huge “Sweet” throw up on a freight carriage behind. All three have the trademark teeth and pink gums. Jail House Blues features a banjo-playing villain singing with his cellmate while their dog looks forlornly on. The left-hand wall of the gallery is dominated by Off The Rails, a huge canvas depicting several demented-looking track workers wielding truncheons in front of a graffiti-covered train. The culprit is nowhere to be seen. With strong narratives and such a high standard of painting, these are some of Sweet Toof’s finest works to date.

The artists have made a few collaborative pieces too, with the familiar motifs of gums and teeth, and snappy crocodiles. Finely painted miniature surfboards hang in the window, depicting an open mouth or a single crocodile eye, as well as a combination of the two. A series of paintings by Rowdy hang on chains from the ceiling, painted on solid planks of found wood, giving them wonderful textures. Brightly coloured, and in a tropical setting, Rowdy’s cat character makes a rare gallery appearance, lounging on a lilo, sandwiched between two paintings of crocodiles laying in the bright sun above and night below, against a backdrop of palm tree islands. A tiny block of marble sits on the gallery counter with crocodiles encircling the edges. This is based on a shutter Rowdy painted with Sweet Toof and Shuby during a recent trip to Hastings, which is where they struck upon the idea for painted surfboards.

The show is open right up until Christmas Eve at See Studio in Hackney Wick, and as works are sold from the installation (you take the pieces away as you buy), new pieces are added, so it’s worth making repeated visits if you are local. There will hopefully be a print release in time for Christmas too. Some magnificent work is on show here so be sure not to miss it.

See a bunch more of Alex’s pics from the show here. 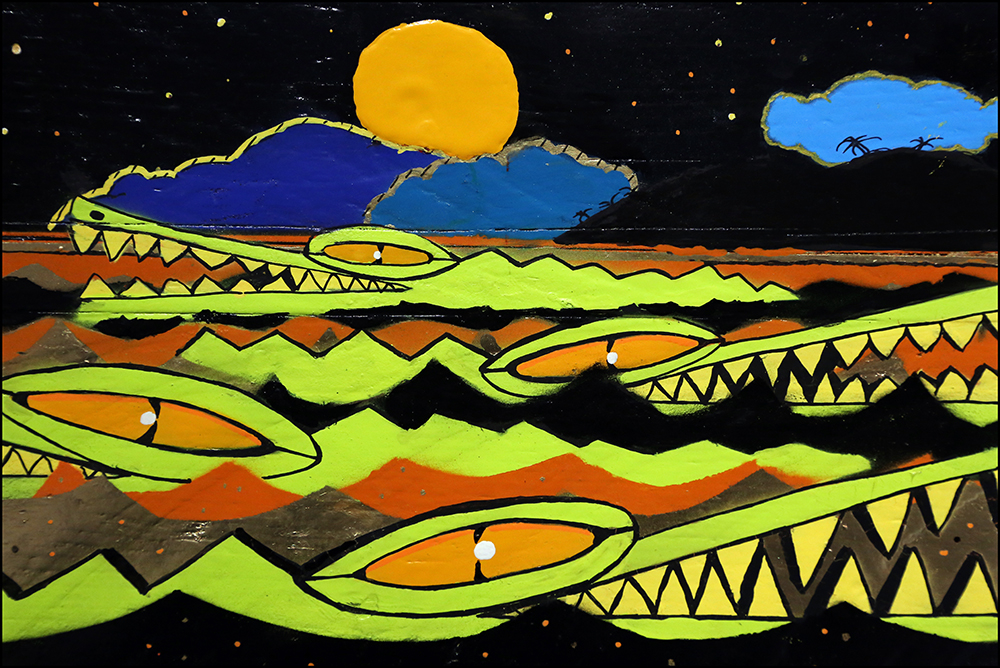 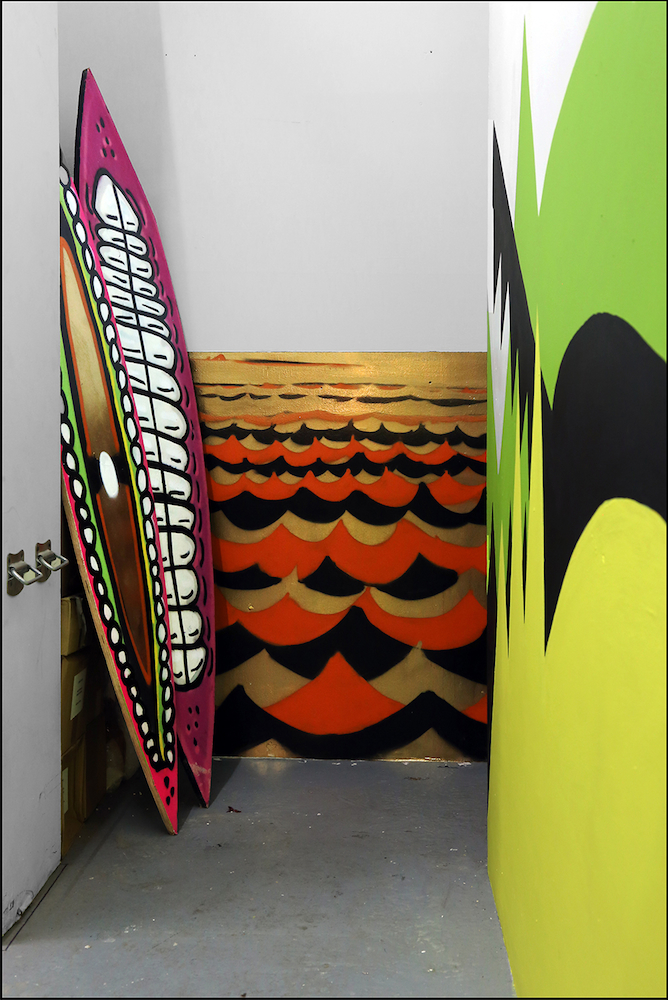 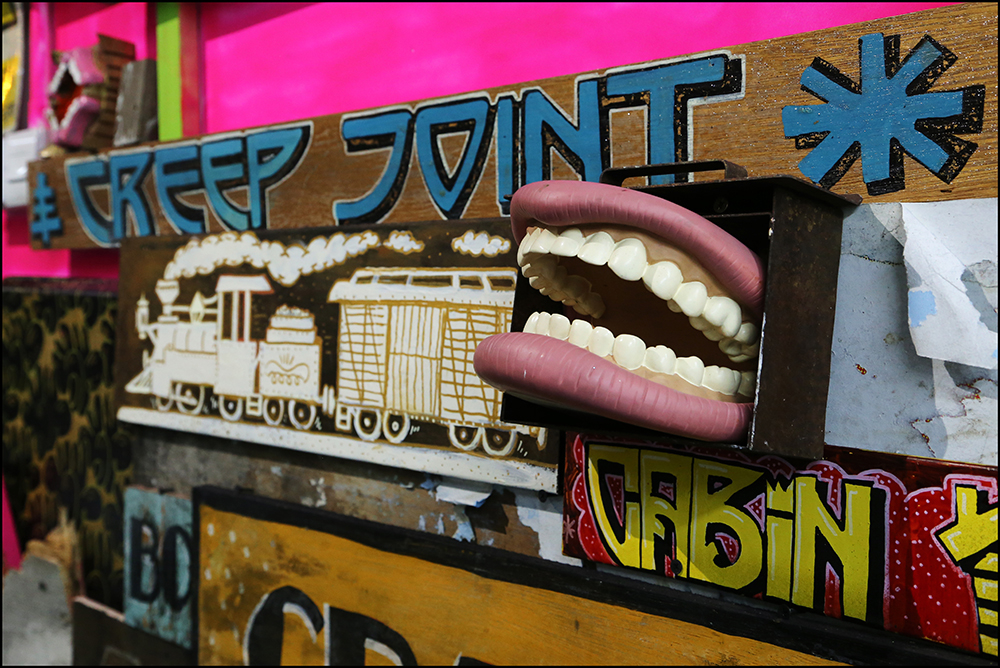 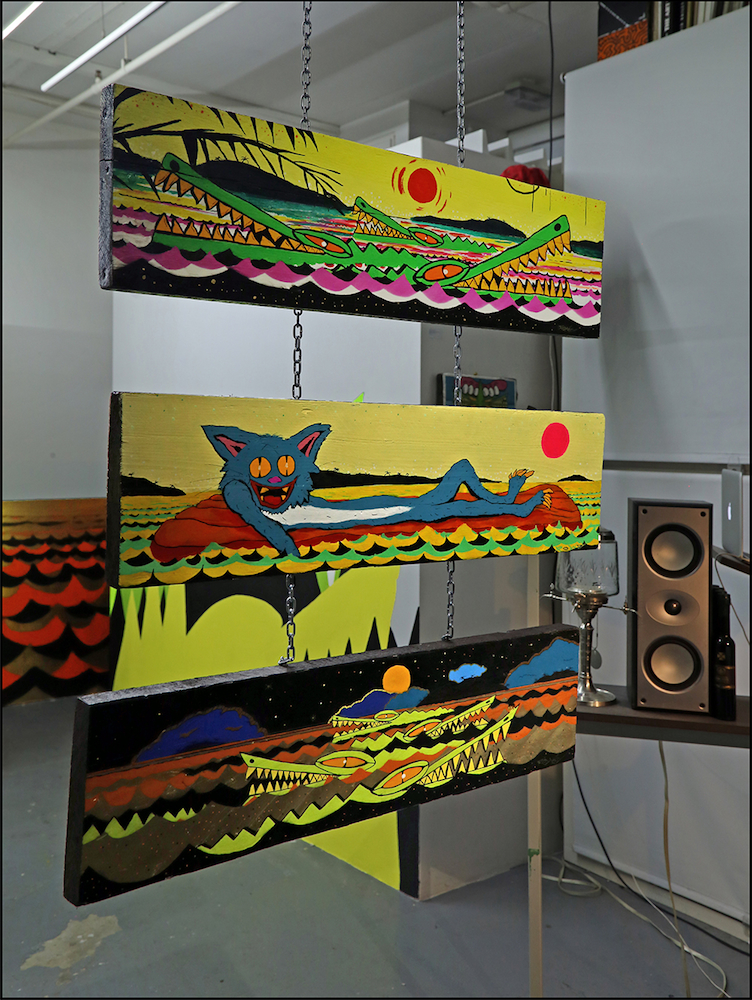 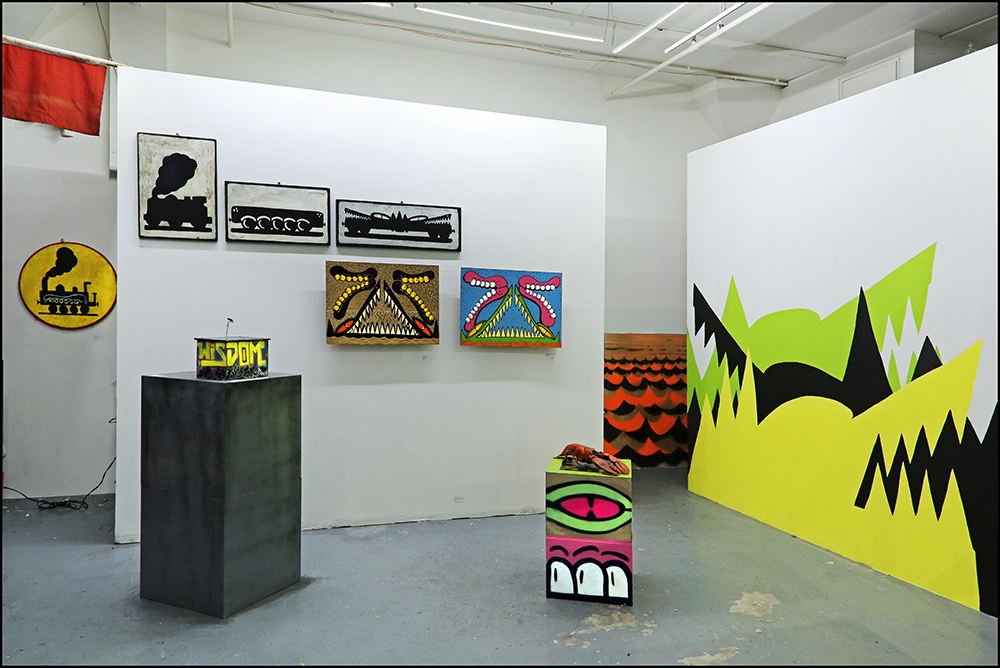 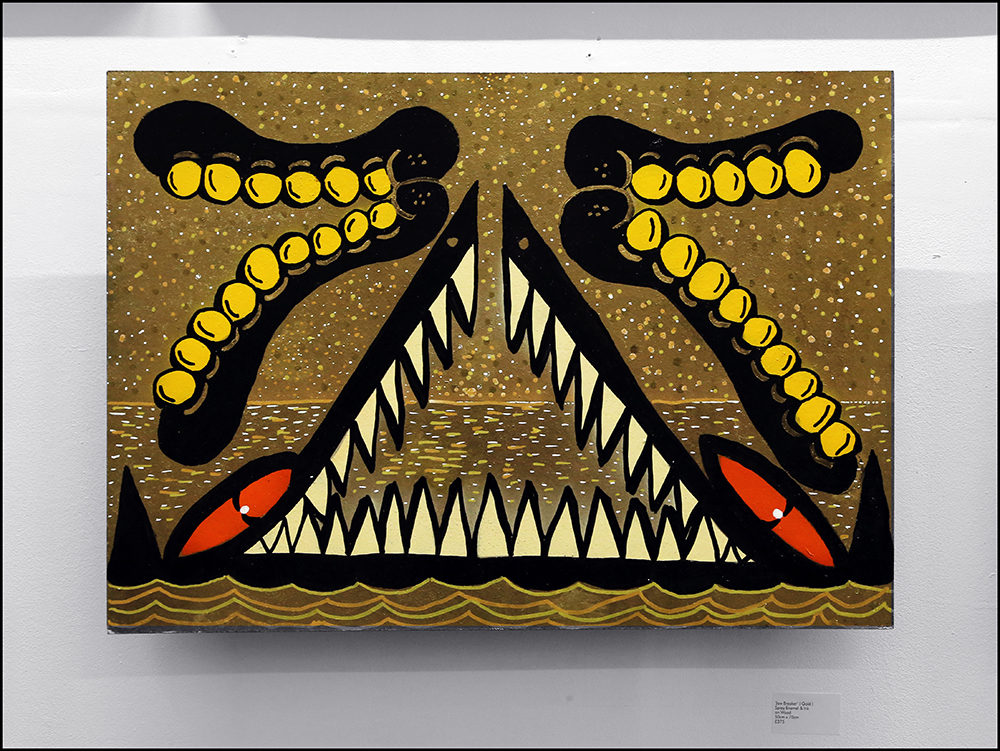 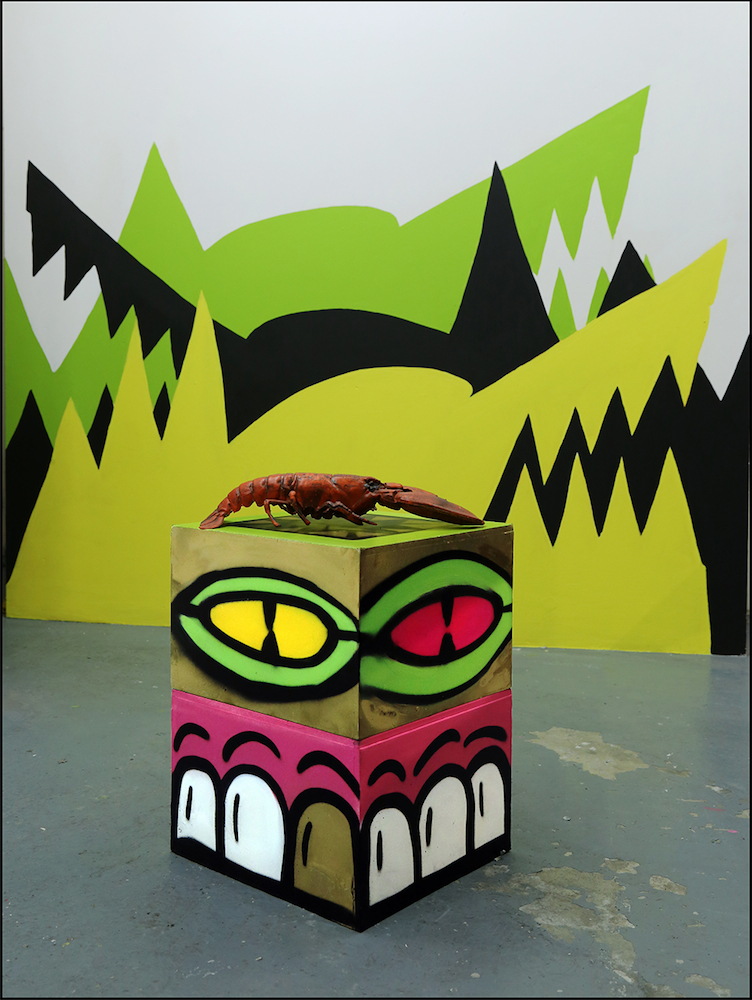 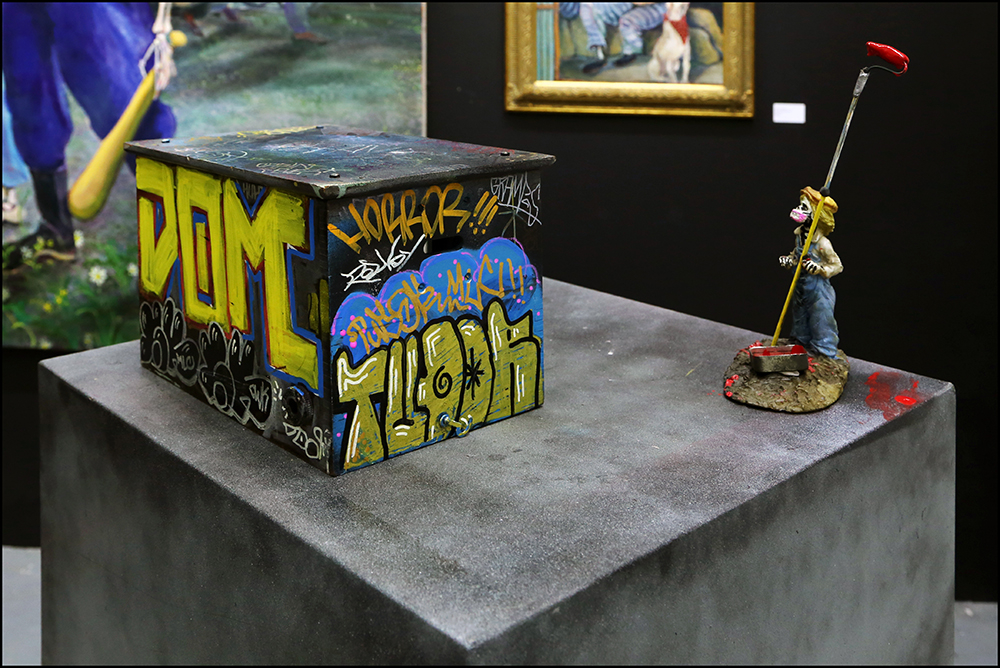