LA based Sage Vaughn makes a welcome return to the UK for his new solo exhibition Nobody’s Home this week at Lazarides Gallery. His ability to present beauty and brutality, cleverly intertwined within the same image, has always resonated with us. A couple of weeks ago, Sage interviewed Bill McRight for AM in anticipation of his solo exhibition Willing to Lose at Breeze Block Gallery in Portland. This time around Bill has repaid the favour and turned the questions on Sage. Read on as the pair get chatty again…

Sage Vaughn (SV): My grandmother had a lot of art in her house. Everything from famous names to stuff she bought in little weekend markets in Mexico City. She introduced me to art as a means of communicating. It tells about the culture, the artist, and then something else when it’s bought and reveals something about the character of the collector. My father was a commercial artist. He always relished the technique. So he would take me to the zoo and we would just hang out. He helped me to draw what I saw not what I thought I saw – if that makes any sense.

BM: I think you are probably best known for your paintings (the ones on canvas) but you use a variety of materials, envelopes, collage, baseball bats, and even a rhumba (am I missing anything?)… What appeals to you about using so many different materials?

SV: I think just the variety appeals to me. Not all of my ideas involve paint and canvas. I like the tradition of painting; its legacy is a rad thing to be a part of. But I also find it really exciting to experiment. 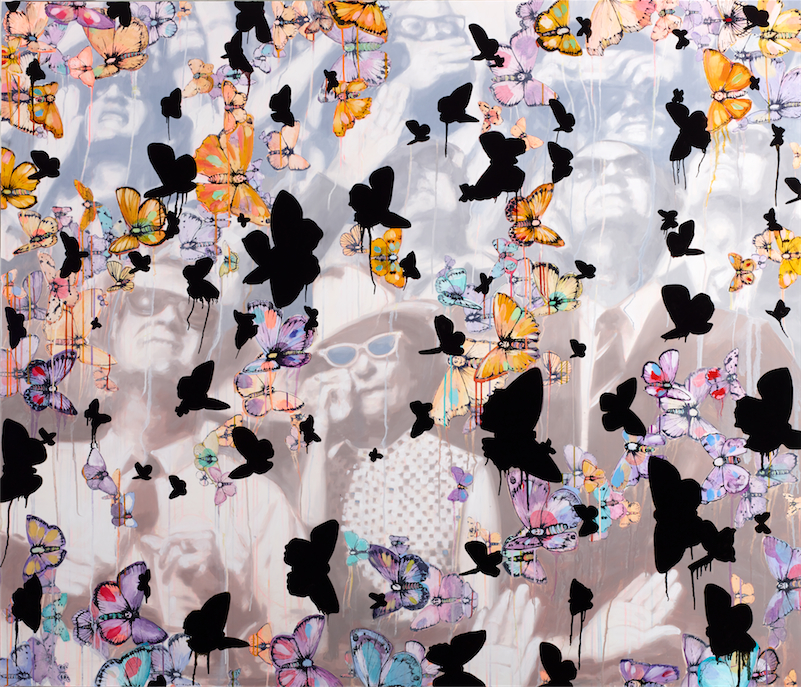 BM: The subject matter that instantly comes to mind when I think of your work is butterflies, then birds, spiked bats, kids, collages, and then skulls (in that order). Can you talk a little bit about the different subjects and what they mean?

SV: Most of the animals I depict are the species in closest relation with society. There are closer creatures, like cockroaches, lice, and bedbugs, but it’s hard to sell paintings of parasites (unless you’re Andy Warhol). The real reason I paint those specific animals is because of their proximity. We can see them, so we can relate. The children are really the human equivalent to that line between society and the wilderness. It’s where we are taught to have certain conditioned responses/emotions to the world and not the natural instinctual improvisation we have as a kid.

BM: What kind of work did you make for this show?

SV: For this show I took the birds inside. I wanted to shape an entire show around the concept “NOBODYS HOME.” Somehow, I get catalogues from interior design-y companies. The staging for their photo shoots always seem so alien and bizarre to me. It’s even weirder when you go to someone’s house and they’ve decorated their place to look like one of those magazines. For example: a three-foot high stack of books next to the bed/couch with a lamp on top. It always looks cool, but not really meant for someone to actually live in that environment. No one’s home, so I felt like the birds would look comfortable and at home in it. It’s the opposite of how you normally would expect a bird to react to being trapped inside. The works with the butterflies represent a more allegorical interpretation of the “NOBODYS HOME” concept. More along the lines of no one is paying attention, or that no on should actually live there.

BM: You interviewed me a few weeks ago and asked me about preparing for shows, I’m gonna ask you a similar question here. Do you go into making work for a show with a concept or is it sampling of a certain time period work wise?

SV: Normally its just a certain number of works within a given time…but lately its become more focused. More crystalized. 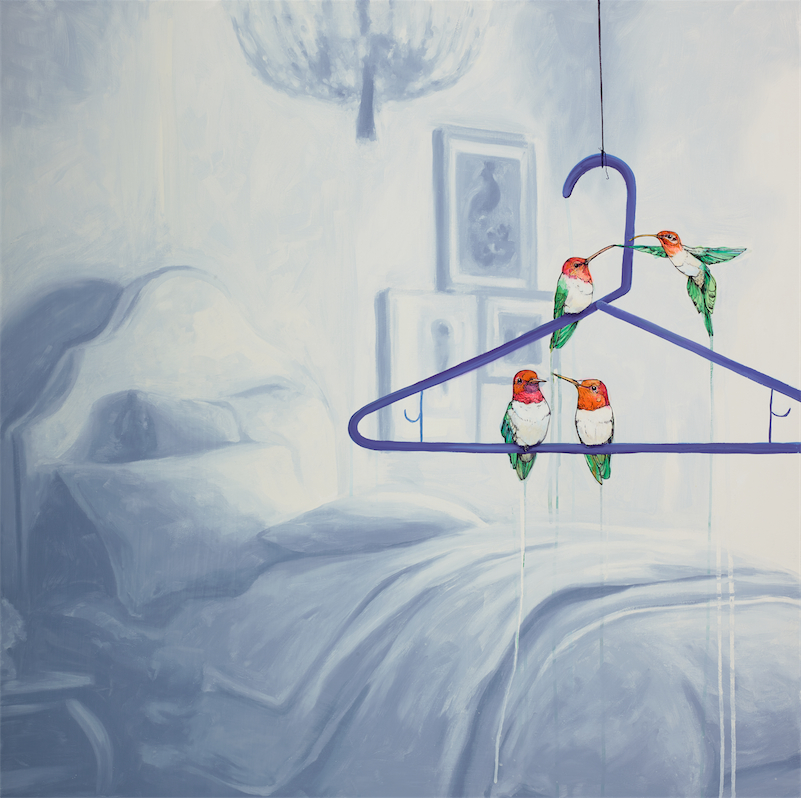 BM: I have heard you described as a “blue collar” artist, I know you have a crazy work ethic, what’s a typical day like for you?

SV: I don’t know where that came from. I’m a bit obsessive, so I spend a lot of time in the studio, but I don’t think that’s unordinary.

BM: I have been reading about Joseph Beuys, he used a lot of animal imagery as well, are you into that dude?

SV: Fuck yeah; my favorite piece of his is “I LIKE AMERICA AND AMERICA LIKES ME” 1974.

BM: Aside from art world influences, what has helped to shape the way you look at the world and the things that you make as a result? 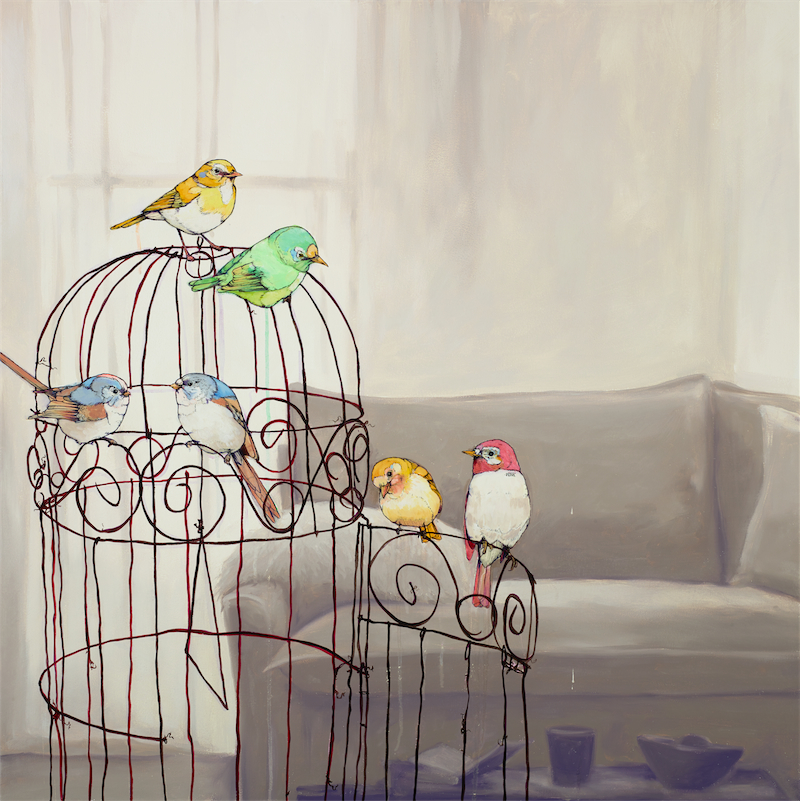 BM: I know you grew up in the valley. My only concept of what that means is “vals” from ’80s movies, what is really up with the valley?

SV: Everybody does time in the Valleyl

BM: Last time we talked on the phone you were making crazy outer space sounding music while we chatted, did you ever play music? Is there a secret album in the works?

SV: I make a lot of sounds. I don’t think anyone would confuse it with actual music. I don’t like music very much, so…. I don’t know

BM: If you weren’t making art what would you be doing with your life right now? 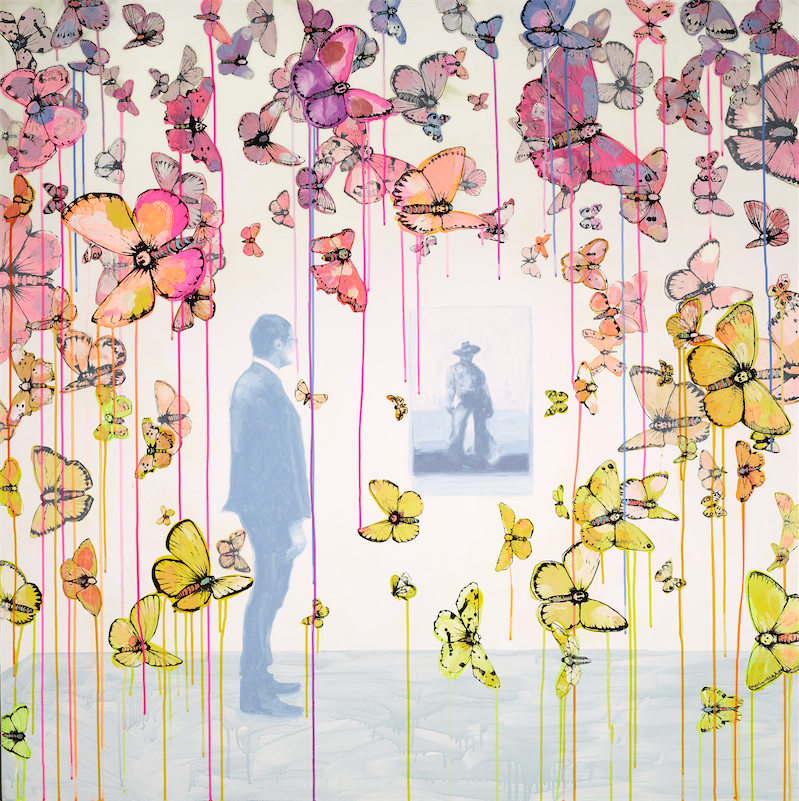 BM: You’re a relatively new father, how has this affected your life? Is it the most awesome thing ever?

BM: What artists are making work that inspires you? What has you excited about their stuff? 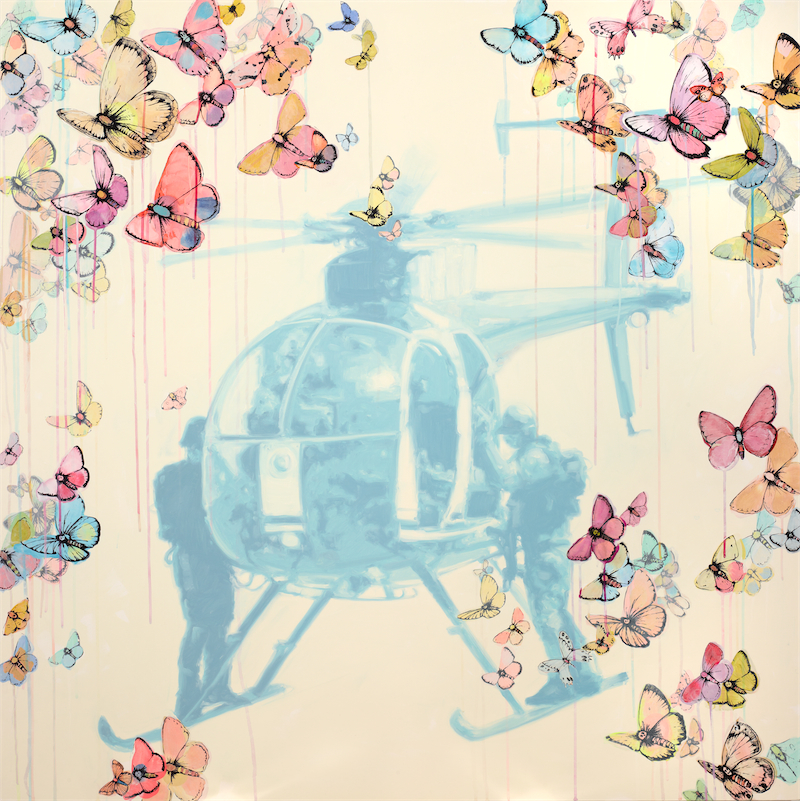 BM: What’s up with the cat ranch?

SV: My wife is an animal lover…. Therefore, we have a hard time expelling the dudes that hang around our backyard.

BM: If sleep is the cousin of death what kind of relative is daydreaming?

SV: IHOP – I think that answers both of your questions. 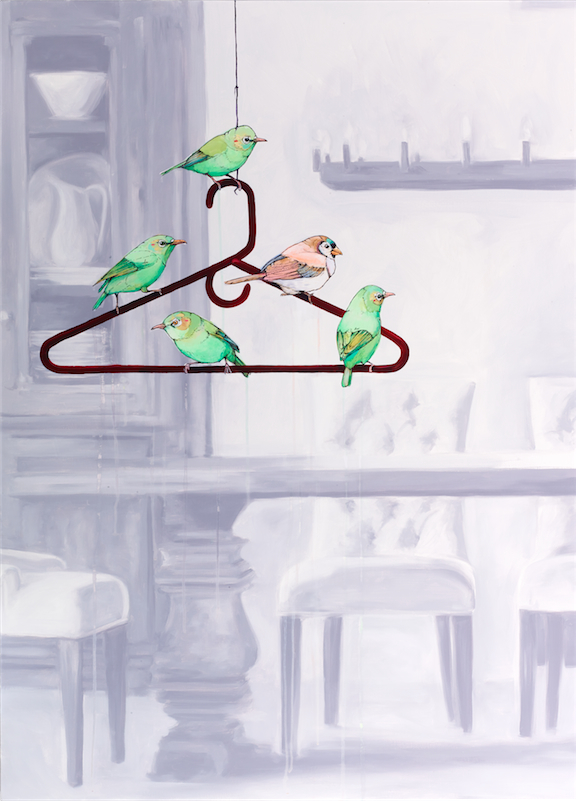 BM: Aside from making your paintings, collages, etc., you have some of your work fabricated, how does work you design and have a craftsman fabricate differ/ relate to the stuff that comes directly from your hand?

BM: We talked about this recently as well, when we did the spiked bat and paint balloon show together at THIS it was a fun and totally innocent experience way different that a regular hang some art on the walls kind of show. Given the chance would you do something else like that?

SV: I think my work has certain very commercial qualities, so I like the opportunity to make things that are not for sale. Things that are just to be experienced rather than owned. 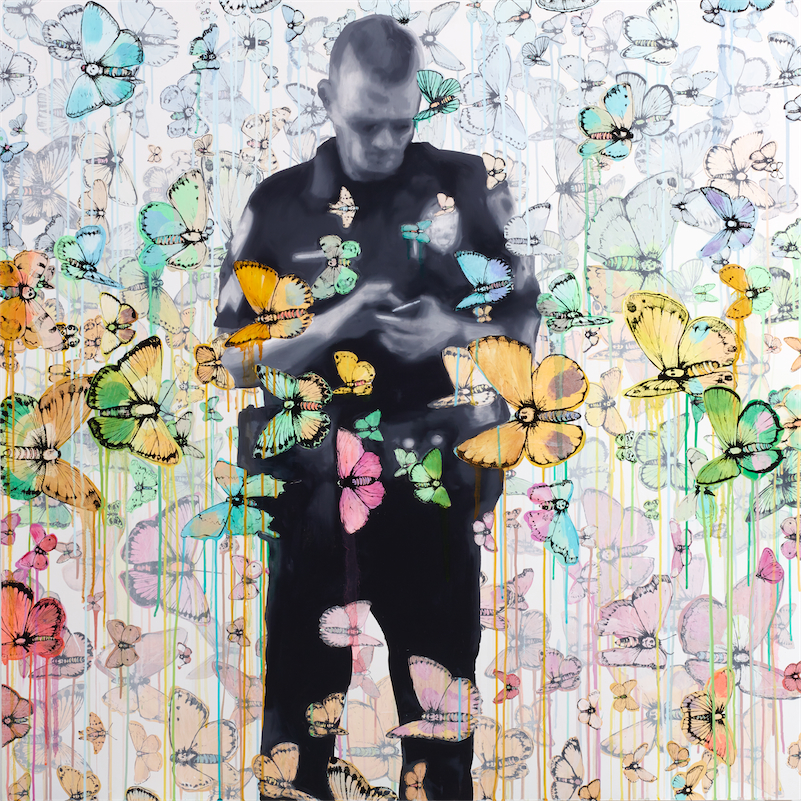 BM: What happens, for you, when art becomes pretty much impossible to sell and transcends into more of an experience that can only be captured in photographs, video, and memories?

SV: Sometimes that’s great other times it is very forgettable. 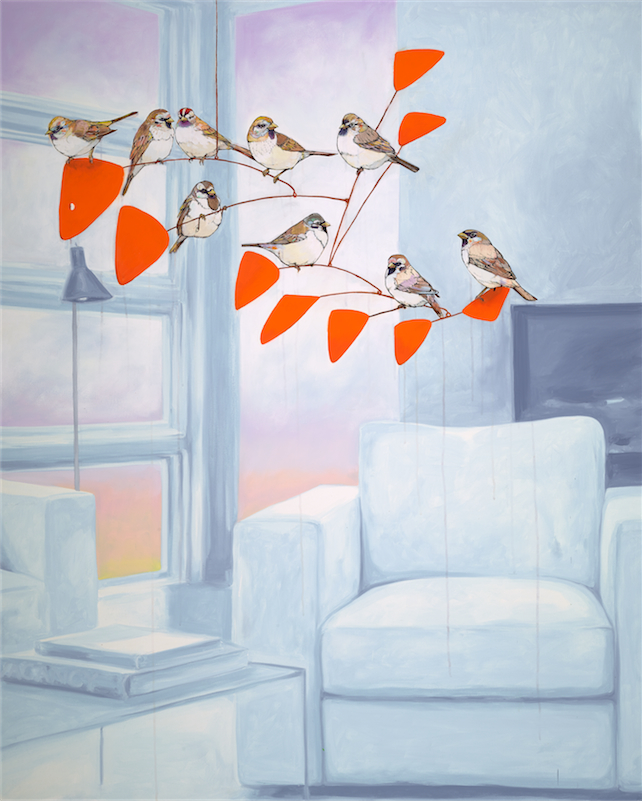 BM: If you were to wake up as a stuffed animal tomorrow (toy not taxidermy), what kind would you want to be?

SV: My son has a stuffed donkey he loves; I would want to be a donkey dude.

BM: If you had a radio show what would be your signature sign off?

SV: Thanks for listening America; I can’t believe I have a radio show!