This Thursday night (December 10th), the Paul Kasmin Gallery (293 Tenth Avenue location) will be hosting the opening of Mark Ryden’s first solo in New York since 2010 (covered). Entitled Dodecahedron, the new body of work will include the Los Angeles-based artist’s first-ever bronze sculpture, eight new paintings, drawings, color studies, and a new porcelain edition. We recently had the opportunity to talk to him about the the upcoming exhibition as well as a few other things such as the Pop Surrealist Ball he hosted with his wife, his creative process, some inspirations of his, and more.

Take a look at the questions and answers below as well as some preview images from the show. 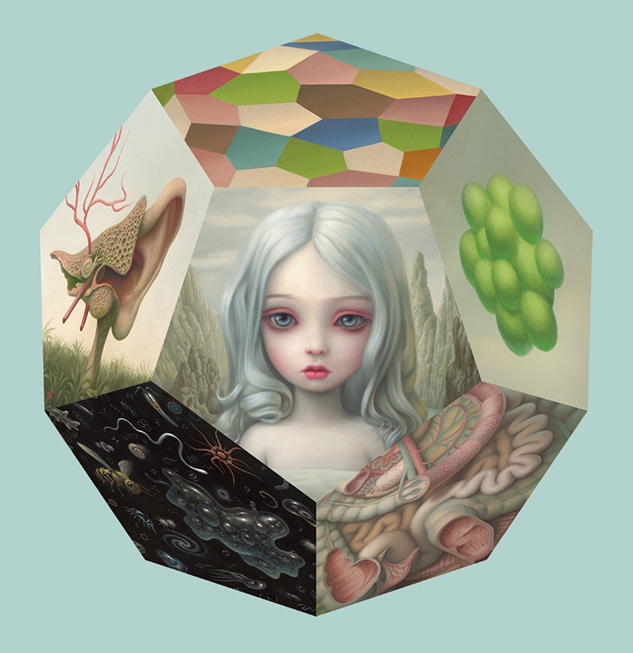 Arrested Motion (AM): Can you tell us a little about the new body of work? What were your inspirations and what were the reasons behind choosing Dodecahedron as the title of the show?

Mark Ryden (MR): The theme of my exhibition could be described as “the soul confronting its physical form,” with the Dodecahedron symbolizing a bridge between the physical world and the intangible realm.

Even before I fully understood the significance of the Dodecahedron, I was instinctively attracted to it, and it began to show up in my paintings. The Dodecahedron is a very special geometric form, permeated with mystery and connotations of divinity. It belongs to a small group of five geometric solids that share a simple set of parameters: the same polygon on every face, and the same number of faces at each vertex. It is interesting that there are only five shapes that belong to this very limited group. They each have a mathematical beauty and perfect symmetry that have given them tremendous significance to mathematicians and philosophers since the times of antiquity. They became known as the Platonic Solids because they figured prominently in the philosophy of Plato. He associated each shape with one of the four classical elements of earth, air, water, and fire. The fifth solid, the Dodecahedron, he nebulously associated with God and the heavens. Aristotle alleged that the heavens were made out of an element he called “ether” and he attached the Dodecahedron to this element.

AM: You spent a few years exploring the imagery and ideas seen in your “The Gay 90s” series of shows and works. Have you continued on to a new set of concepts and themes? How do you decide you are ready to move on to something new?

MR: I have many themes simultaneously percolating in my head for possible exhibitions. They are different from one another, but are also related and build off of one another. Sometimes ideas will be bouncing around in my mind for a very long time. By the time I begin actual tangible work on a theme, it will have evolved significantly from the original conception. I have sketches that belong to this current exhibition that go back over 10 years. Often, by the time I begin work on a show, my thoughts are already on the next theme. 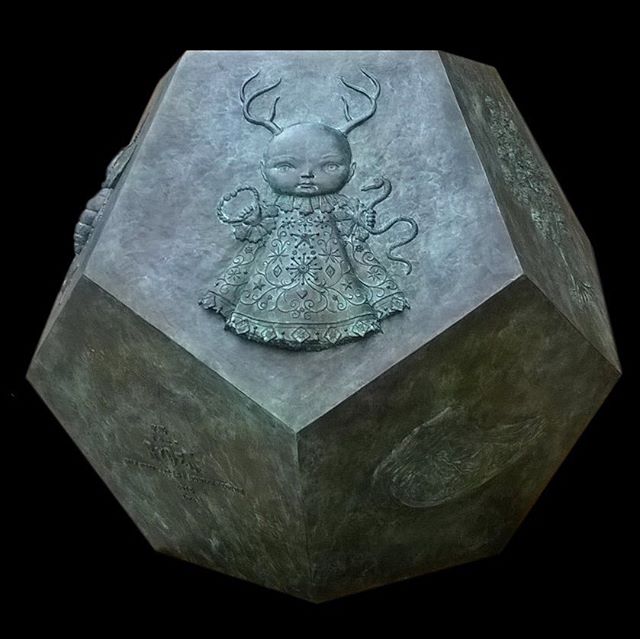 AM: We have seen glimpses of your first ever bronze sculpture and it looks fantastic. It looks like you also traveled personally to the foundry in Italy, which must have been a blast. Tell us a little about the process behind creating this piece and your experience in working with this new medium.

MR: For the possible fabrication of this bronze, I visited a notable foundry here in the United States that does a lot of high-end sculptural work for many well known contemporary artists. It was a very impressive place, but I realized the techniques required to fulfill my vision could only be found in a place that uses old world techniques and classical craftsmanship. I found what I needed at the Foundry Guastini in Vicenza, Italy, where generations of artisans have been creating bronzes with the traditional lost wax technique. These same techniques have been used since the time of ancient Greece.

I was able to be in Italy when the panels were poured. It was very exciting! The clanging of the equipment was loud and imposing. Bright, multi-colored flames shot out of the giant furnace of molten bronze, and the distinct smell of burning metal filled the air. It was all very dramatic. Watching the bronze panels broken out and released from their molds was quite moving. 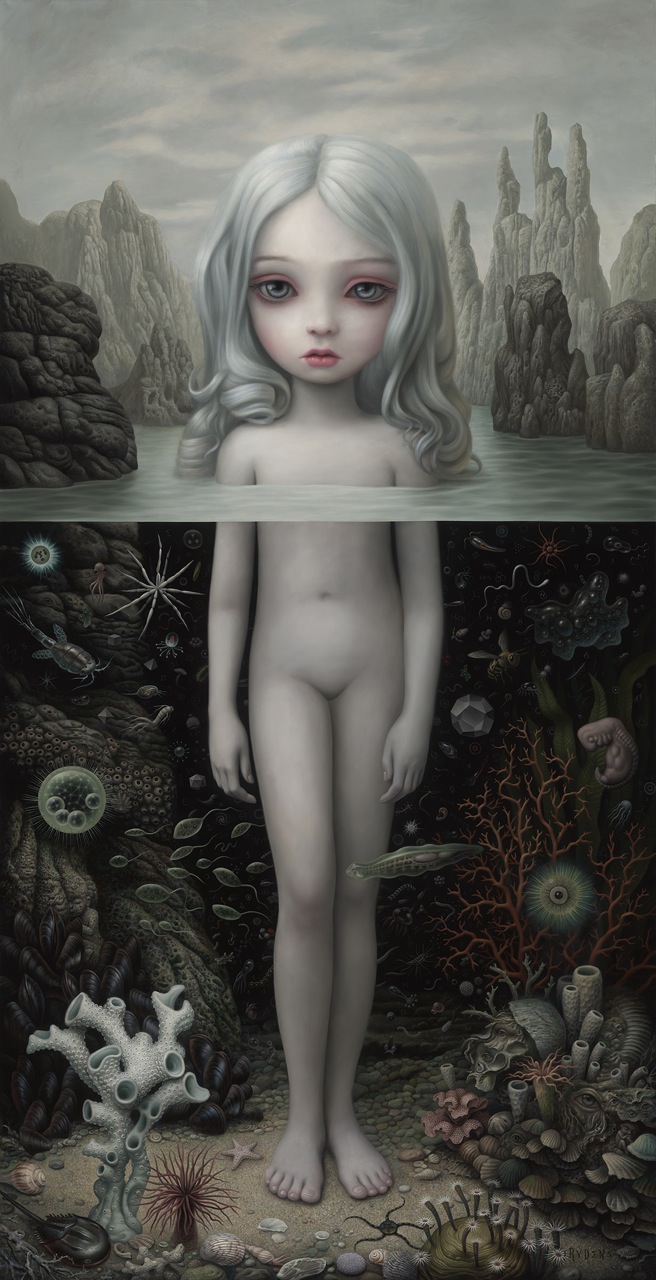 AM: Your showstopper for the upcoming exhibition must be Aurora, measuring 9 feet tall (your largest piece to date) and requiring a special easel built for it. We heard paintings like The Parlor and The Creatrix which are smaller, took almost a year to paint so this new piece must have been time intensive as well. Do these massive pieces pose a special challenges to you physically or in terms of composition? Have you ever used or consider using assistants to help with the process?

MR: These large pieces are indeed a large undertaking. I have to be prepared for a great deal of work, which will take a very long time. It can be difficult to decide to commit to any particular image for such an undertaking. In the past, I struggled with the thought of using assistants in my work. I have come to very clear thinking about that. What I enjoy and want to do with my life is to make art, not to direct others making art. I prefer a simple life where I quietly work alone in my studio and create. There is a special, almost sacred thing that happens between my paintings and me in that space. Assistants would only create frustrations and complicate my life.

AM: We would love to hear about your creative process? For example, are your compositions sketched out in advance, do you paint from your imagination or use or shoot photo references, is the computer involved?

MR: I make a great many sketches before deciding on a particular image. I work with extensive reference materials. My studio is filled with my inspirations, which include statues, toys, models, prints, dolls, and a massive library of books and ephemera. I also take my own photographs particularly for figurative elements. I usually combine a vast number of visual sources into one painting.

AM: We recently had the pleasure to attend and cover the Surrealist Ball (covered) you hosted with Marion during Baby Tattooville. The immersive experience was hard to describe in words and something we will probably never see again. How did something like that start, develop, and come together in the end? Did it meet your expectations and would you ever do it again?

MR: Many people told me it was the most amazing weekend they had ever had. Those that were lucky enough to be there, got to experience something very special that is hard to imagine ever happening again. Bob Self had been asking Marion and me to do his annual BabyTattooville event since its inception nine years ago. With our busy schedules, it was difficult to ever commit. But with this event, the grand finale, Bob promised to bring to life anything we could imagine. He didn’t disappoint. We worked with Bob to bring together a team of wonderful people, and in a wild frenzy of creativity, and with the hard work of all these people, the event came together beautifully. 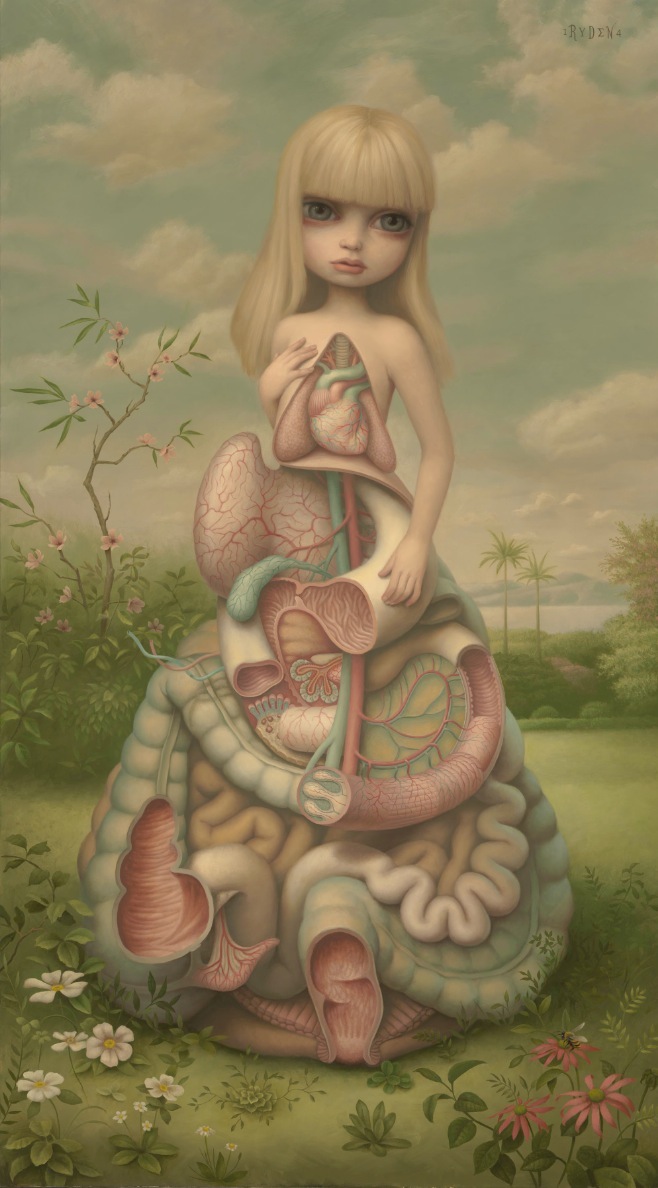 AM: What is your daily routine and practice in terms of art making? For example, do you paint every day, same times of day, play music, or have any other schedule you go through?

MR: Unfortunately I spend too much time each day grumpily answering email. I suppose it is the necessary evil of running a business with the making of art. The amount of time I spend painting ebbs and flows, but when I am in the height of it, I do paint almost everyday. When I was young I painted best late at night when spirits felt most active; as I’ve grown older, I find the quiet of early morning nourishes my creative spirit best.

AM: It is obvious that your are quite influenced by math and the sciences when we look at things like the geometry, anatomical detail, and numerology in your imagery. How deeply did you delve into these subjects in your schooling and do you still take time to research and learn things from those fields.

MR: I am no mathematician or scientific expert, but I love the subjects. I watch a lot of documentaries on math and science. The paradoxes of Quantum Physics are a never-ending source of curiosity. I am particularly interested in phenomena that push the boundaries of Science and Spirituality. 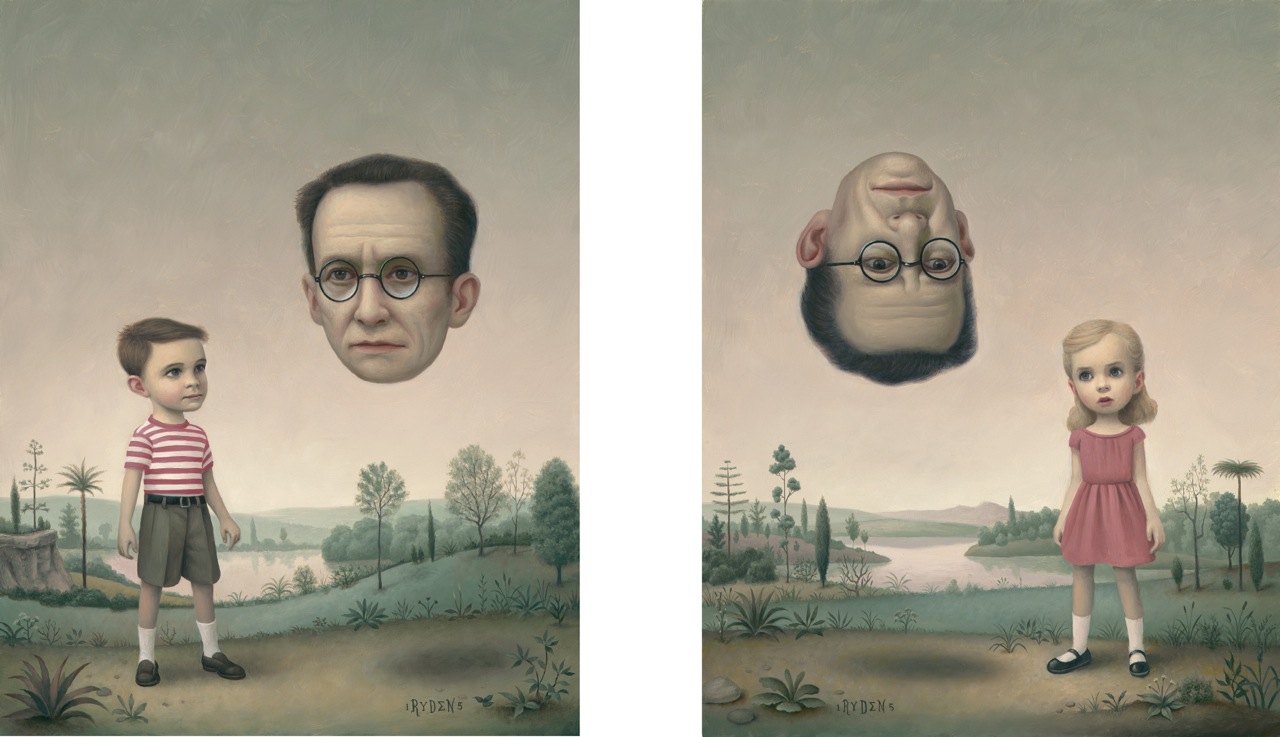 AM: Any other future projects or shows you can let your fans know about?

MR: I am included in a wonderful exhibition, HEY! modern art & pop culture at the Halle Saint Pierre in Paris, France that is currently up through March 2016. It’s a large exhibition with many great artists. I try to keep the news section of my website up to date with events and projects so it is a place to check in on for future events.

AM: Thanks Mark and good luck with the show!