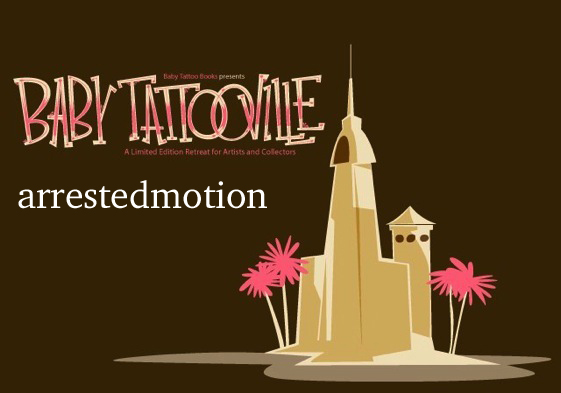 Baby Tattooville concluded yesterday with a fantastic brunch at the Mission Inn as well as passing out of the “goodie” bags (more on this later). We must say that we thoroughly enjoyed covering this event and would recommend attending next year for anyone interested in this genre. Arrested Motion will be on hand to cover the event again in 2009 and we hope you have enjoyed our on-site blogging this year.

Over the next several weeks, we will post some extra stories from this year’s event that may help you decide whether you would like to join in 2009.

As a surprise announcement yesterday,Â three artists were announcedÂ as confirmedÂ participants for next year’s Baby Tattooville: Liz Mcgrath, Travis Louie, and Audrey Kawasaki! Hopefully that tickles your fancy;Â and by December 31st, the entire roster of artists will be confirmed and announced!

Note: The priority for signup goes first to all the attendees of this year’s show.Â Â On November 1st, the fewÂ remaining spots go on sale to the general public. But with most of the attendees this year indicating that they want to return, there may not be too many open spots available before sell out.Â SoÂ for those already wanting toÂ join next year, email [email protected] ASAP to get yourself on the priority list in time for the Nov 1st sale date!