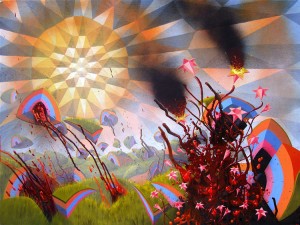 Opening at the Joshua Liner Gallery this coming Saturday evening is Damon Soule‘s newest collection of fractal infused work, entitled “Amused Loon”. For what has become a perennial affair with gallery owner Joshua Liner, this show will be a homecoming of sorts for Damon, a New York City native, with this being his first major solo show on his home turf. Since Liner packed his bags and left the City of Brotherly Love, thus closing the opening chapter of his gallery owning career, he has kicked off his own return home to the Big Apple with a series of extremely successful shows. This exhibit, running from October 12th to November 15th, seeks to build upon the momentum achieved thus far. With an authentic, raw approach, Damon melds organic and mechanical forms into a synthesized whole, as if one were to tinker with some deluded scientific experiment – feeding wild animals microchips or germinating seeds in computer screens – to satisfy one’s bizarre curiosities.

Exhibiting in tandem is Chris Mendoza‘s “Daily Habits”, where he shows his insanely steady hand with which he engineers complex interstellar cities in his ink drawings and masonite carvings. If you’re in New York this weekend, pop in and check it out. 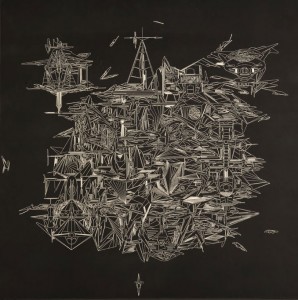