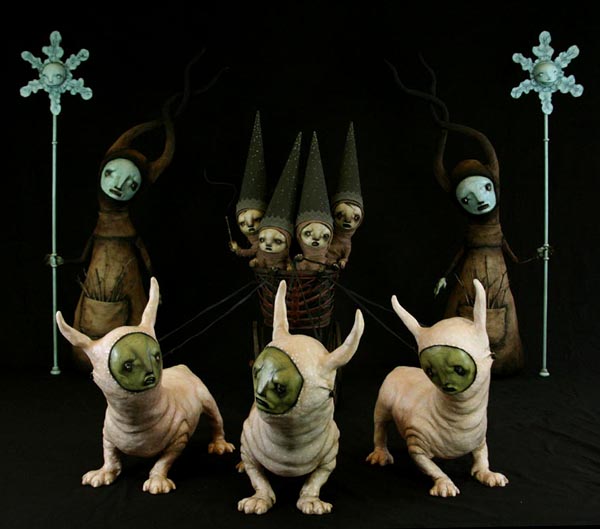 What do you get when one of the biggest collectors of this genre, Mark Parker (Nike), fully funds an artist like Scott Radke to create a commission? A masterpiece! Check out this complex set of sculptures by Radke done over a 4 month period. Stunning… and not small either, the sculptures range from 21″ to 53″.  We talked to Scott a little bit about his process of working through this commission…

Interview after the jump. 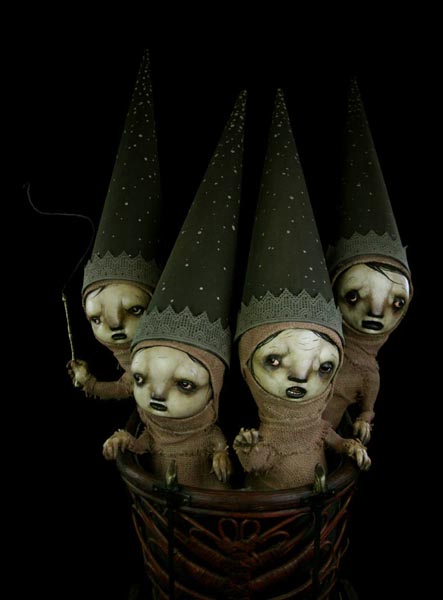 Arrested Motion (AM): We have been following your work for a while and this one is definitely one of the larger projects we have seen. How was it like working with Mark Parker on this commission? How involved was he in coming up with the concept?

Scott Radke (SR): Yes, this is the largest project I have ever attempted. I don’t really like to do commissions. Most of the time, I turn them down and oddly enough the initial reply to Mark was no. When i realized who it was, I decided it would not hurt to ask what he had in mind. A lot of times people want very specific things, and that’s ok some of the time, but I like to primarily work from my subconscious. Even the littlest detail or suggestion can throw that off.

My experience with some previous commissions has been hit or miss. I did some marionettes that were supposed to be used in the film Magorium’s Wonder Emporium. They wanted some marionettes of Dustin Hoffman and Natalie Portman. With films, they usually want something yesterday and I did not have the shots I needed to make them look as the characters were to look in the film. So anyway, I spent all this time making 3 or 4 marionettes and nothing became of it. Other times, it goes very well. I have a 4 year old child and the time I have to work can be limited. I usually try to just stick to what I want to make and fortunately, that actually seems to work out best for me.

Mark mentioned that he was open to pretty much anything. He gave me some idea about what types of characters from my previous work that he liked and mentioned he wanted 4 – 6, some interacting in some way, with a large central figure. The interaction was probably the most difficult part for me. Most of my characters are solo. He was always supportive of whatever images I sent him along the way. He also told me that I can use it for exhibitions or retrospectives whenever I want. How nice is that? It’s been a great experience and I hope I can line up other projects like this again. 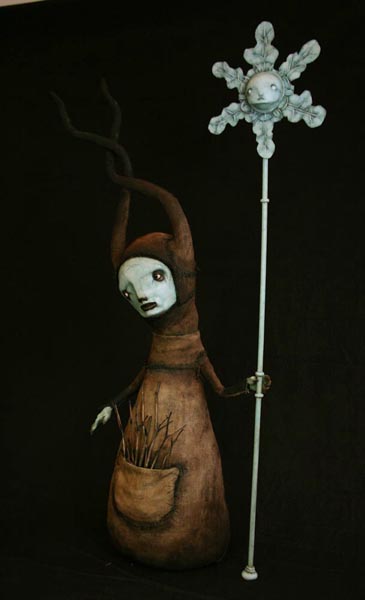 AM: Can you explain this piece to us?

SR: Not really. I usually work in sets, so this is basically 3 sets of what I would normally do individually. But with these, I linked them together as I went along. It was really tough for me to see the finished idea as I went from set to set. It kept evolving. Originally, I wanted the dogs to be more goat-like, which is why they have those long ear/horn type things. The carriage riders at one point were going to be riding the goats.

They are from no specific time or place. A lot of what I do is like daydreaming. If you’re a writer, I imagine you would daydream in stories and words, but mine are more image oriented – shapes, colors, animals, faces, and textures. I just clump them all together and add and subtract along the way until something feels balanced and complete. I could probably come up with what it means or where it came from, But I know that whenever I title something or explain something in writing, when I go back and look at it even just a month or so later, I feel uncomfortable with the way I explained or defined it. It always seems wrong or like I only explained it how I felt on that particular day. I’m just trying to protect myself. It’s better to me for people to come up with their own interpretation. 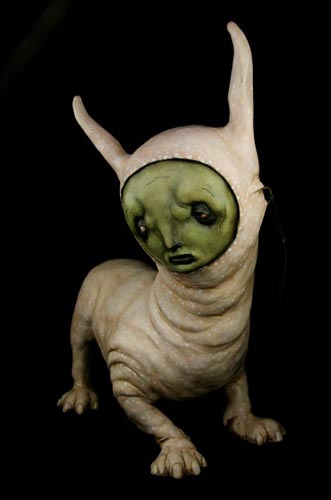 AM: How is working on commission different than doing something on your own?

SR: Very, depending on what the commission is.

AM: Can you tell us a little about any shows or projects you have planned for 2009 and beyond?

SR: Nothing set in stone right now. I’d like to do a larger gallery show down the road, but it’s difficult to achieve right now. It takes me months to get up enough work for a large show, and I have to pay the bills so I rarely can save up enough work. I’d definitely like to explore working on this scale again. It was daunting at times, but now that I made it through, I have the confidence that i can do it again and can feel some ideas I’d like to try in this size. Other than that, I plan on getting back to small sets of characters pretty soon.

AM: Thanks for you time Scott. Look forward to seeing your next set of sculptures.