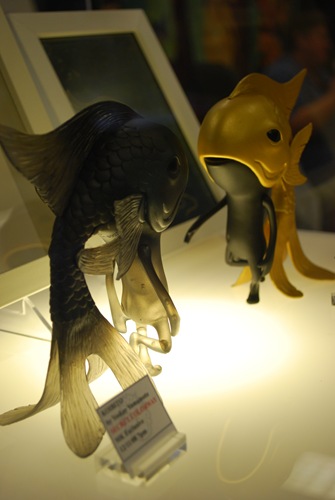 Yoskay Yamamoto has been working closely with Munky King to produce the second colorway of his “Koibito” vinyl figure. Since the initial all black colorway sold out at the SDCC this summer, fans have been clamoring for another colorway to add to their collection. Well this Thursday, the new Koibito figure will be released in TWO different colorways. The first is a gold andÂ black colorway (edition of 500) and the second is a Munky King exclusive translucent-smoke colorway. (edition of 150) 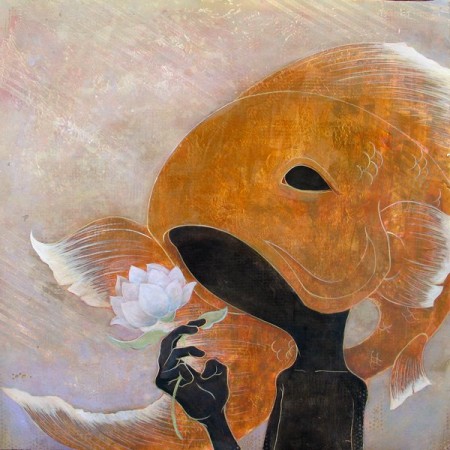 Yoskay has created a few extra surprises for fans which line up early. This gorgeous Koibito painting “kata-omoi: unrequited love” which will be raffled off to one lucky fan. He also hand painted 25 special Koibito gocco prints and a few hand customized Koibitos that will be available for purchase on a first come first serve basis. So, be sure to get in line EARLY if you want a chance to nab any of these exclusive goodies!

Catch Yoskay’s exclusive interview with AM after the Jump!

Arrested Motion (AM): You’ve been a successful painter so what got you started on creating a vinyl figure of your famous paintng “Koibito”? Was it an easy process? How long did this process take?

Yoskay Yamamoto (YY): First, Munky King in china town was one of the first store to carry my art work.
Then after a year or two showing in la gallery scene, Patrick Lam, the owner of Munky King approached me about making a vinyl figure out of my characters. We had few options but we decided to pick the fish head character. The process was a quite long journey… from brain storming about the stance and proportion of the figure, then actually sculpting the prototype, and package design and marketing campaign….. over all of the production took about a year or so.

Now, we are focusing on the release party, trying to figure out the detail and surprises…..

It never seems to end…… 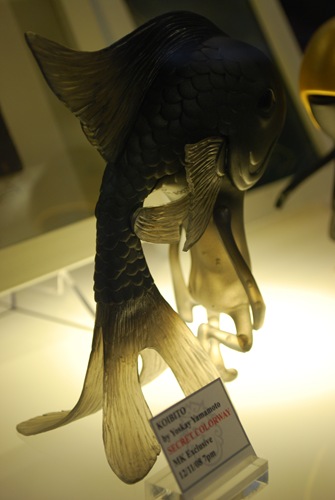 AM: Your Koibito toy premiered this summer at Comicon to massive fanfare. Wired magazine named it: “Top 10 must haves from Comicon”. We also noted a Koibito sold recently at a major auction house. What do you think about it’s success? Have you thought about creating another vinyl figure from your artwork?

YY: Having my own vinyl figure was on my check list of life goals, so I’m truly happy to be able to check that off. Yes, I would love to make another toy 🙂 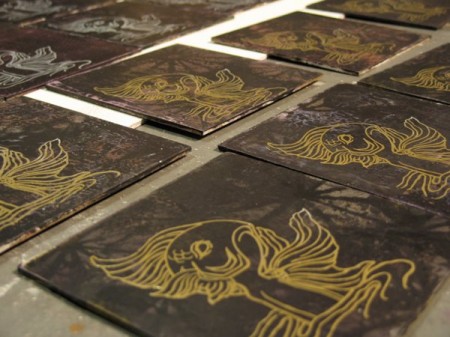 AM: Finally, since your last solo at Project Gallery (now Cersoli LeBasse) sold out, many of your fans have been waiting for your next solo… You have your first international solo show in the UK next February at O Contemporary. What do you think about showing internationally? How is your progress coming along for the show? Are you excited?

YY: It still feels like a dream to have a solo exhibition over seas….  I started out having shows in coffee shops and boutiques, so to me it’s a big achievement. The show is turning out nicely. There are few works that are quieter than my usual style and so far those have been my favorite. Yes, I’m very excited and so is my whole family 🙂 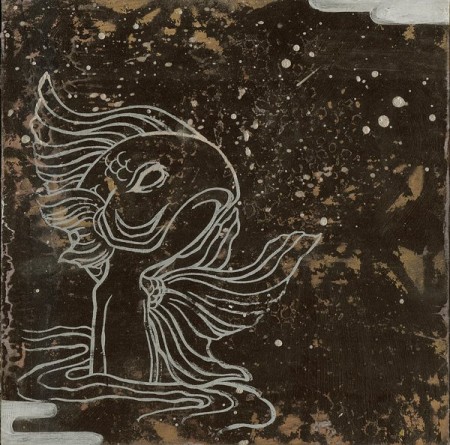 AM: Thanks for you time Yoskay, we will be on hand to document the release party.  Good Luck!