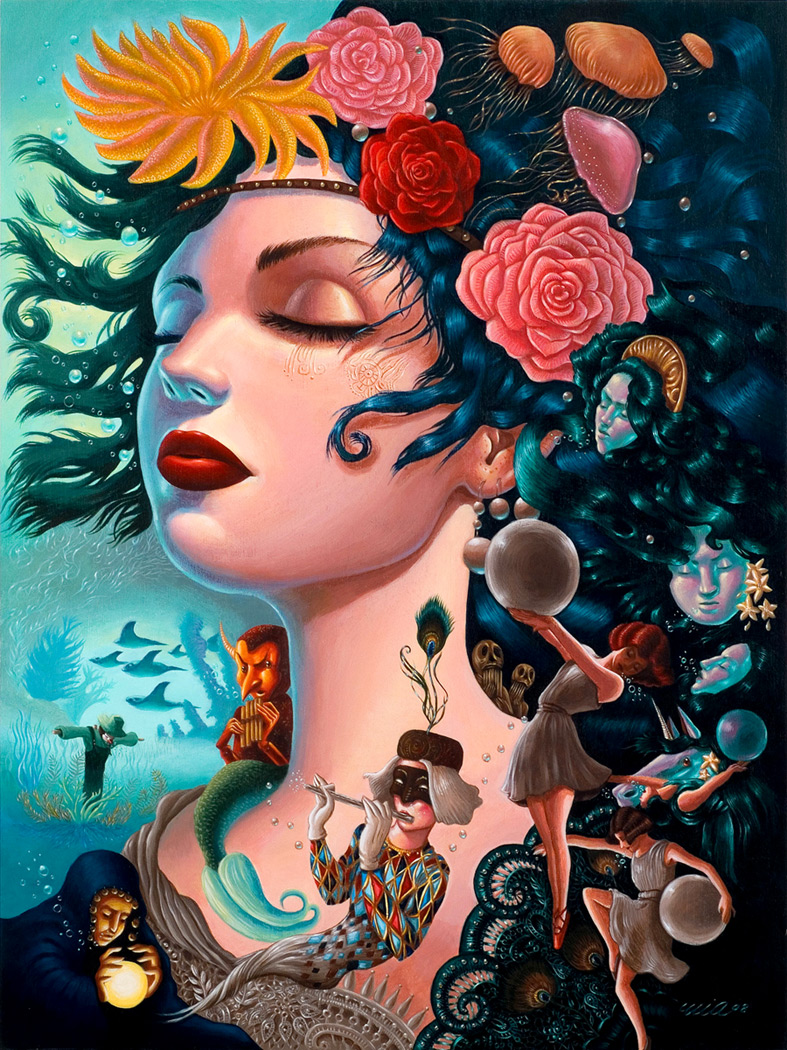 Coming off her recent sellout show at Ad Hoc Art in Brooklyn (here)’ Michelle “MIA” Araujo has put together a fresh group of paintings for the upcoming “Illuminate” at Corey Helford. Illuminate is a group show where MIA will showcase her beautifully illustrated works along side Robert Bellm and Angelique Huotkamp. Unlike most shows, this one’s a quick 1 week drive-by! So don’t blink or you’ll miss it!

Check out the interview MIA gave AM after the jump. 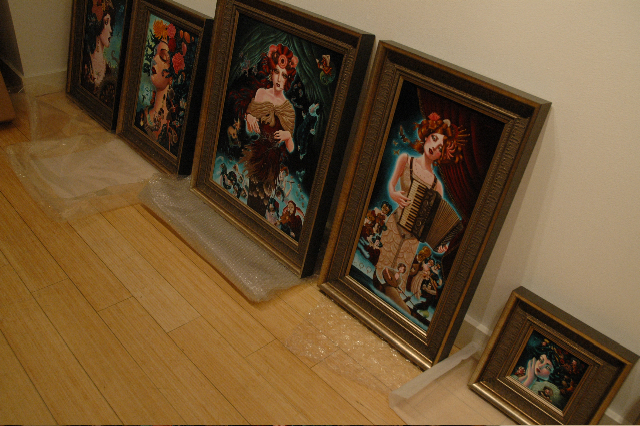 Arrested Motion (AM): Your artwork always seems to have an exciting story to tell. It feels like a tightly packed movie preview, do you have the storyline pre-planned before you create your artwork or does it just flow out of your imagination while you are working on the canvas?

MIA: Lately a lot of my pieces have been based on well-known stories (in this show, Midsummer Night’s Dream, Snow White, Alice in Wonderland, the 12 Dancing Princesses), and I usually have another theme that I’m trying to get across by using those stories (in this show, it’s a few: sleeping/dreaming, imagination, death/rebirth of the inner self). I start conceptualizing by making a list of words and imagery that inspire me and then fixate on one mental image for the whole piece, which I will sketch out. This show was rushed, so the first drawing was also the final draft, meaning I didn’t get a chance to work things out with several drawings. In the drawing, I work out the figure first, and then start drawing out the mini-narrative characters into the composition in whichever way they flow. So there is a spontaneity to it. Sometimes I’ll want to include a sphinx or an apatosaurus, say, but if it doesn’t work anywhere in the piece, then I won’t use it. Each piece has mysteries even to me, and new meanings arise from the different elements than I intended. I love hearing what my sister’s (and other viewers) interpretations of my work are because they always have better stories than the one I came up with!

To continue with your question, I’m pretty new still to painting, so I need to have a drawing mostly figured out in order to paint it effectively. Although there have been times where I’ll be painting and I’ll change something in the piece completely.

AM: We’ve noticed that you tend to focus on a single female subject as the starting point of a lot of your paintings; do you plan to do more works featuring male subjects or Animals?

MIA: The female subject can be a life-long exploration for me because there is so much complexity that I’ve always wanted to convey about women, especially the 2d female characters in most stories. However there are some male characters I would love to paint like Peter Pan and just so many others… as well as animals/creatures. Hmm… I have a whole 78 yrs ahead of me if I live to be 100 (which is the goal), so anything can happen! hahaha 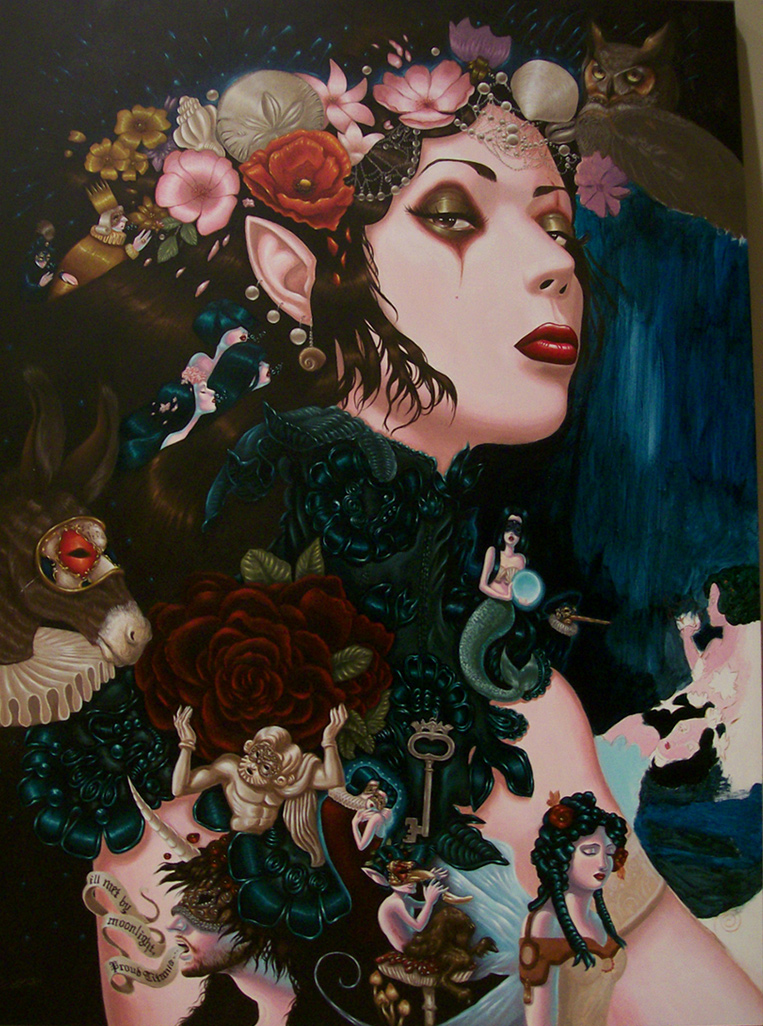 AM: As a recent winner of our “Shepard Fairey in DC” contest, you won an Obama “Hope” signed by Shepard. We assume that you’re a fan of Shepard Fairey, what do you think of his work and are there any other artists that inspire you?

MIA: I learned about Shepard in graphic design history class in art school and his work always stood out to me. I’m a sucker for aesthetics combined with a powerful message, so he fits the bill pretty definitely. (I still can’t believe I won a signed sticker, so thanks guys!)

This is an endless-list question: I have so many heroes in this movement (Ryden, Audrey, Sylvia Ji, and so many others), in art history (Gustav Klimt, Georges Barbier, Harry Clarke, Vermeer, Rubens, the masters..), and in animation (Glen Keane, the Nine Old Men, vintage cartoon-artists). Also in literature, in music, theatre, film, and nature, and I can go on and on. I used to feel overwhelmed by all of my interests, loves, and obsessions in the arts, but now I am inspired and excited by them. Maybe that’s why there’s so much going on in my pieces. There’s so much going on in my head. I just can’t get enough of anything! 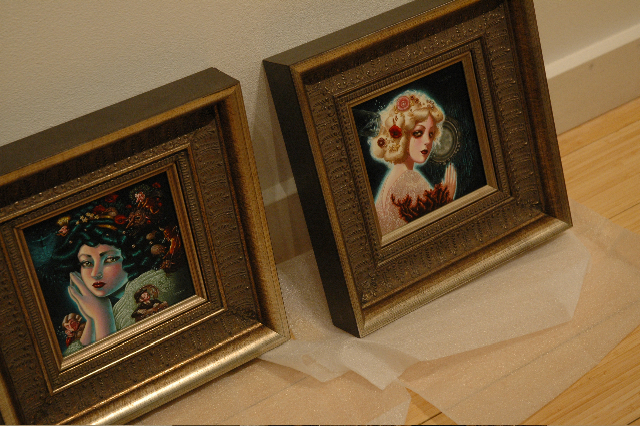