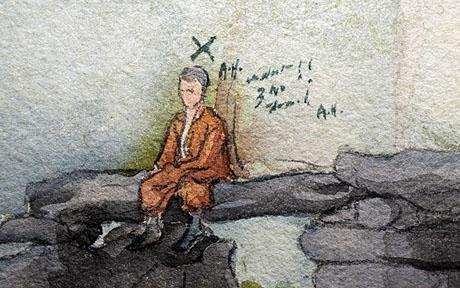 We recently found out that one world leader’s (Vladamir Putin) painting was worth $1.1 million. Now, another more infamous and more dead former leader’s paintings will be up for auction – Hitler’s. This set of 13 paintings set to go under the hammer next month are expected to sell for a lot less, one of which is seen above. The self portrait of the Nazi leader seen above is signed with the initials A.H.

This lot of paintings were from the time when a younger Hitler was a struggling artist.Â  He was twice rejected from entering the the Academy of Fine Arts in Vienna and was told he had no talent.Â  Hitler continued to live on the streets of Vienna, selling his postcard paintings to tourists and fervently reading anti-Semitic literature, which was readily available at the time.Â  Perhaps being a tortured artists in these formulative years led him to become the monster that murdered millions in his later years.