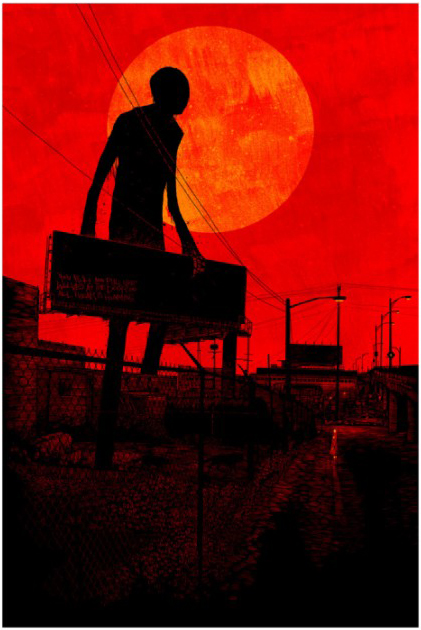 Daniel Danger and Dan McCarthy will be debuting their latest show, “The Watcher in the Woods,” tonight at Gallery 1988SF. Fresh off the success of their Los Angeles group show “Idiot Box,” G1988 is certainly coming correct, bringing together these two amazing talents for the first time. Known primarily for their fine-art prints and collectible rock concert posters, the Daniels will both be on hand for the opening.

AM had the opportunity to sit down with both artists before the show opens. Check the interview after the jump… 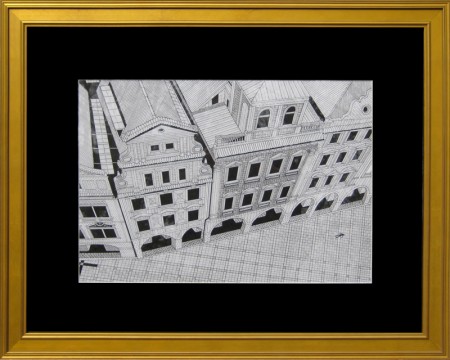 Arrested Motion (AM): Can you introduce yourselves and give our readers a little bit of background information on who you are?

Dan McCarthy (DM): I was born September 6, 1976 on Cape Cod and went to the School of the Museum of Fine Arts in Boston. I lived and worked and played in bands in Boston up until 2007. I moved back to Cape Cod and now live in a house on a cranberry bog with my wife, Karin and dog, James. Also, I play drums in a band called Helms. My brother plays guitar and his wife plays bass. We’ve been playing together for about ten years.

Daniel Danger (DD): The Danger nickname comes from a terrible high school punk band i was in and it’s just sort of stuck around with me. I’m 26 years young, currently residing in Massachusetts though currently trying to find a nice new proper place to live. I play and sing in a loud band called A City Safe From Sea with myself, Stephen Swift and noted print maker Justin Myer Staller. My top five Jeopardy categories would be: 1. Cereal mascots. 2. Antiques roadshow. 3. Vintage guitar effects pedals. 4. Steve Martin’s “The Jerk” 5. The nation of Sealand. 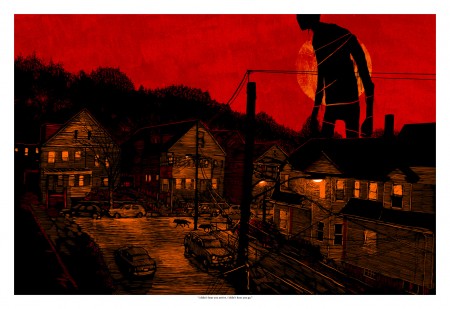 AM: When we first heard about your show together, it made a lot of sense. There certainly are a lot of common threads between the two of you, the most obvious being stylistically, but you also both live on Cape Cod and both do concert posters. How exactly did you first meet and how did this show come to fruition?

DM: The gallery emailed me about a year ago asking me to do a joint show with Danger and it sounded like a good idea to me. I’m excited about the show. I’m a big fan of Danger’s work. We don’t really live too close together and we’ve actually never met before. I know people who know him and I feel like there could have been many times where our paths could have crossed, but it just hasn’t happened. Plus, people who live in Massachusetts are hermits.

DD: Actually I live in Western MA. McCarthy’s like two hours from me and we’ve never actually met, for no real apparent reason other than we both keep real busy. Sometimes I wonder if we did a collaboration piece if anyone would be able to tell who was who, but maybe that would be the fun part. The show came about because I think G1988 just realized “oh hell, why not” and booked us together. It makes sense – two people using similar backdrops for thematically different work. I had done a print for their Stan Lee tribute show which was sort of a sleeper hit so I’ve been back and forth with them since about doing more with them. Very lovely people. I joked we should have blacked out the windows of the gallery and when people came in, there would be nothing but pictures of naked girls holding chainsaws. Just to keep people on their toes. 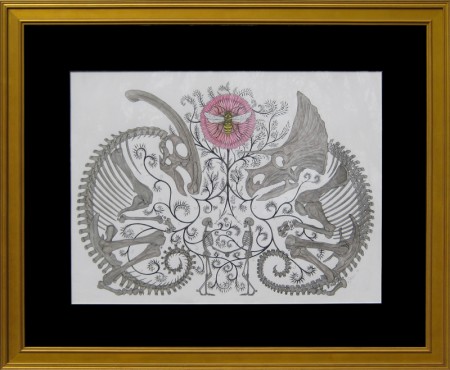 AM: Both of you tend to feature trees as subject matter in your pieces. Something that’s interesting about both your work is how the trees not only typically lack leaves, but even when fully enshrouded in leaf, the night sky often obscures the colors of the leaves themselves. I lived in Western MA for many years and spent every Fall catering to the tourists visiting New England to view it’s renowned foliage. Though you live in a part of the country heralded for it’s fall colors, these colors seem to not play much influence in either of your works. Rather it’s the desolation and sense of abandonment that much of MA, especially Cape Cod, suffers from post-tourist season that really comes out in your pieces. Your thoughts?

DM: That is interesting. I think I’m drawn to leafless trees because I’m surrounded by them eight months out of the year. I do love the foliage, but that time is so short. I think by the time I feel inspired, the leaves have fallen. Cape Cod is desolate in the winter, but I kind of like it. I like the peace and quiet up until about March, then I start to get itchy to see the sun again.

DD: I think the way Massachusetts feels just breeds a certain kind of artist and we both came down similar paths because of our environment. I think the reason Dan and my work is similar is more based around the fact that we’re each drawing what we grew up around and what surrounds us. In addition, Massachusetts is a rather unique place visually. While Dan has the post tourist season abandonment, I have the old mill buildings and closed factories and army base housing and things like that. Maybe I avoid the fall foliage because it’s such a touristy thing in my brain, especially after having worked at many Fall foliage festivals growing up. Plus, since I consider my work to be very much about setting an atmosphere to put the title and characters into context, I’ve always just sort of geared away from really colorful pieces and leaned towards the dusk, night, and dawn settings. You know, because of the ghosts. 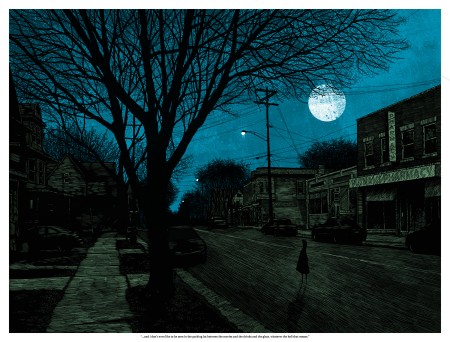 AM: What does influence you?

DM: I’d say I’m influenced by my surroundings and environment plus the cycles of life, science and science-fiction.

DD: Usually my own memory. Really, that’s where most everything comes from in my pieces. It’s usually some sort of re-contexted memory I barely remember to begin with – something someone said to me, something I overheard that I wasn’t supposed to, a barn and a river I went to once when I was a teen, my friend talking about spirit animals, growing up in an era and locale of yearly kidnappings and missing children, etcetera. All that combined with my own sort of bizarre theories on ghosts and odd spirits and the like. In addition, I lost a few people really important to me over the last few years and when they show up, I create places for them to be, to keep them going I guess. I make prints for very specific people and they’re sort of my influence. 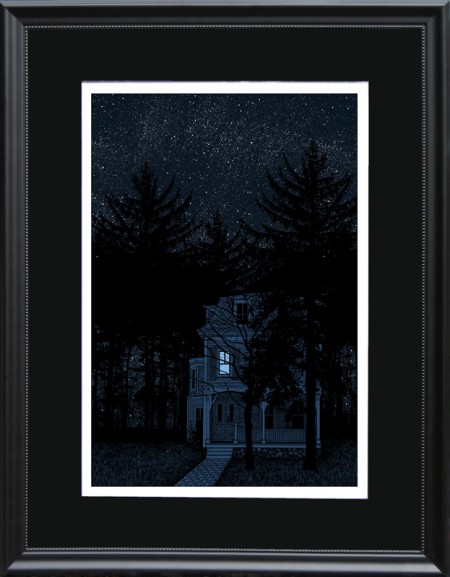 AM: Over the course of the last year, we’ve noticed a distinct evolution in subject matter for the both of you. DM, the skeletons and dinosaurs that predominated your works in 2007 have sort of given way to more brooding landscapes and derelict victorian houses. DD, the floating ephemeral figures you’ve become known for have seem to have grown somewhat in size, becoming monstrous in proportion. Specifically, “You push and pull like wolves” and “I didn’t hear you arrive”. Care to elaborate?

DM: I think my art is always evolving, although very slowly. I think it’s important to try new things. I guess a part of me is wanting to make brooding landscapes rather than dinosaurs right now. But I wouldn’t rule out the dinosaurs and skeletons forever, as I’m sure they will make more appearances in the future.

DD: Progression? I guess. I thought about what the opposite of a tiny ghost girl with an elk or bird would be, which is obviously a large silent black moving human mass that crawls over rural townscapes that’s made up of and drips the shadows of wolves and dogs. Obviously there’s a lot of weight in some of these characters and situations, burdens and baggage, and maybe I wanted something to embody that. If you’re remembering someone and you remember only certain parts of them, where does the rest go? It’s new to me and I’m still figuring it out. 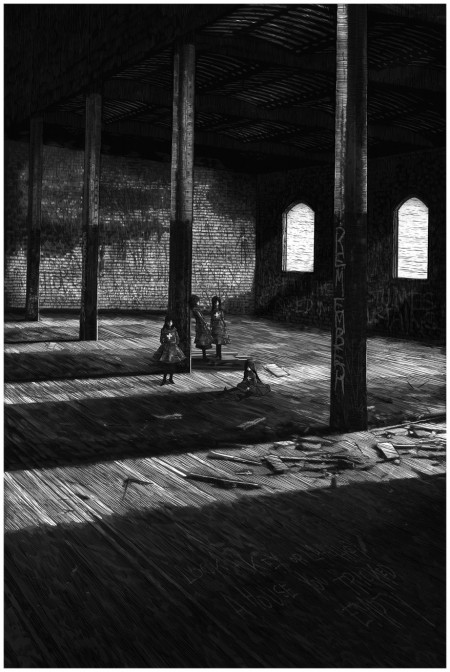 AM: Can we expect to see a continuation of these changes in your upcoming show?

DM: i’ll be showing some prints, drawings and some new paintings. the paintings are along the same lines as to what i’ve been doing lately; night sky, people running in the woods, t.v. lit windows, detailed cities and a couple dinosaurs

DD: absolutely. every once in a while i catch myself getting a little too scenic with my work. and i have to remember that im trying to navigate through my own concepts and narratives that have so much more to explore with them. 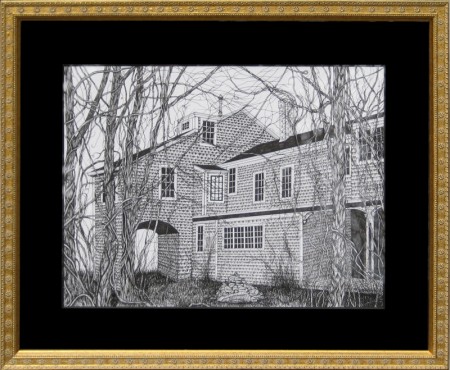 AM: Any last minute surprises or print releases you can tell us about?

DM: I don’t really have any surprises, but I’m excited about showing some clay board carvings I made. They took me forever to make and I’m happy with how they came out.

DD: In the last few months I’ve done like 20+ prints and pieces, so i might need to take a break for a while, or at the very least get started on some mail order. But I’m really proud of what I’ve put out recently, including some very new things for me, so i may have to just keep rolling with it. As for upcoming doings, most important to me is that my band’s album is finally coming out. It’s entitled “Throw me through walls,” and we’re doing a super fun elaborate LP run of it. Five years worth of writing and a years’ worth of on and off recording is finally seeing the light of day. Plus Jay Ryan is doing the cover art. I mean seriously, Jay Ryan! I’m also hopping back into some gig-poster work for a month or so, doing posters for some of my favorite bands: Mogwai and Andrew Bird, as well as stuff for Flight of the Conchords and a few secret things.

AM: Thanks Dan and Daniel. Good luck with the show and the rest of 2009.