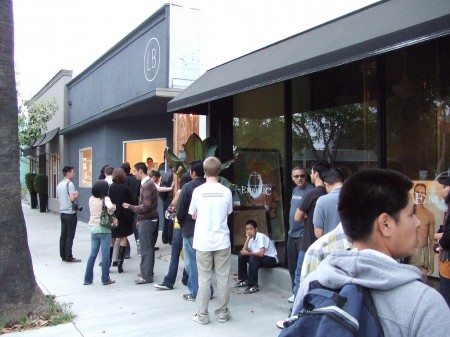 Yoskay Yamamoto’s (interviewed) Koibito release party (announced) took place this past Wednesday at LeBasse Projects. AM arrived at the gallery at 6pm and even though the release party wasn’t scheduled to start until 7pm, there were already about 40 fans waiting outside. In fact, some fans started waiting in line as early as 9am. Once inside the gallery, fans could purchase the white/silver koibito, red/white koibito, postcard sets, “Screaming for the Sunrise” giclee prints and show catalogs. This night also marked the closing of Yoskay’s solo show “Hello and Goodbye” (covered). Catch one last glimpse of Yoskay’s show along with photos from the release party after the jump.