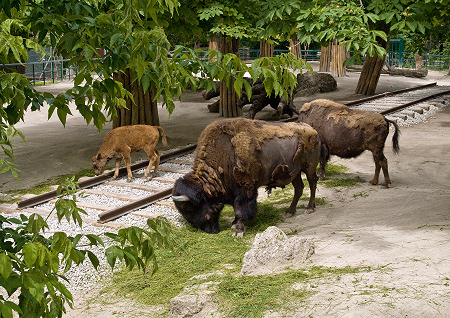 An interesting exhibition opened in June at the SchÃ¶nbrunn Zoo in Austria entitled “Trouble in Paradise.” Artist duo Christoph Steinbrener and Rainer Dempf created a series of six artistic interventions dealing with the idea of nature versus civilization, themes we know well from following artists such as Banksy, Josh Keyes, and Shepard Fairey, to name a few. However, to bring the art directly into a controlled “natural” environment like the zoo is pretty genius.

Examples include railroad tracks in the bison pen, a sunken car wreck at the rhinos, and toxic waste in the aquarium. This staging of the encroachment of humans in an unexpected locale definitely forces the viewer consider things in a new perspective and sends a powerful message.

More pics after the jump.

Via Look Into My Owl.