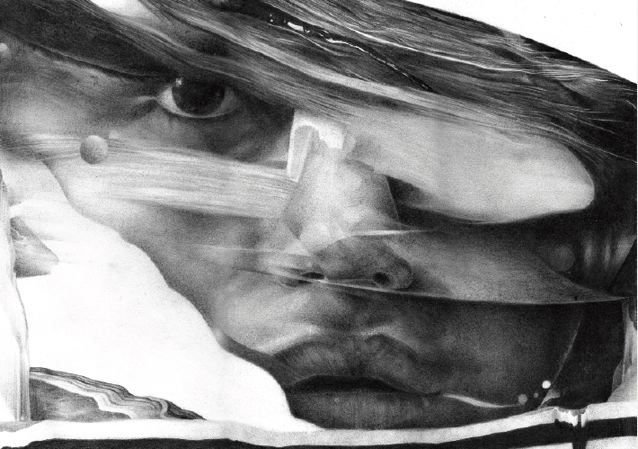 UK based artist Von, or HelloVon as he has come to be known, is opening his show “Semblance” (previewed) at Cerasoli Gallery. The show has been on display since last weekend but the opening reception is this Saturday, September 19th at the Culver City gallery. We sat down with him to talk about his beautiful paintings which incorporate abstract and realistic elements at the same time lending to a dream-like, ethereal feel to this body of work.

Questions & answers after the jump… 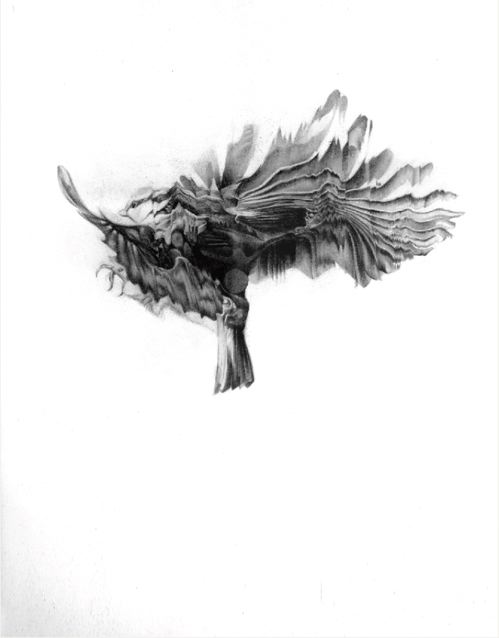 Arrested Motion (AM): Tell us a little about yourself and your work. Any formal art schooling? How did you get involved in the gallery circuit?

Hellovon (HV): I studied illustration and animation at Kingston University in London and after a few years of figuring out how and what I wanted to do via various jobs I setup up studio HelloVon in 2006 as a freelance illustrator.

My work has always been created primarily by drawing or painting so coming into the commercial art scene in a period where vector work was king really helped me stand out once the work started appearing in print. The craftsmanship involved began to attract associations with fine art and as a consequence I was encouraged to exhibit in small slots in various design and illustration based exhibitions and I soon began to seek out as many shows as I could exhibit in to get my work seen.

My first entrance into the gallery circuit proper came when I was privately commissioned by one of the owners of StolenSpace Gallery after seeing my work in a design show. From there, I began to exhibit in their annual group exhibitions. Then my biggest break gallery-wise came from Zoe and David at the Espeis Gallery in NY when they offered me a solo show there in 2007. They were incredibly supportive, nurturing and an absolute pleasure to work with – I count myself very lucky to have had such a fantastic induction into the world of solo shows. 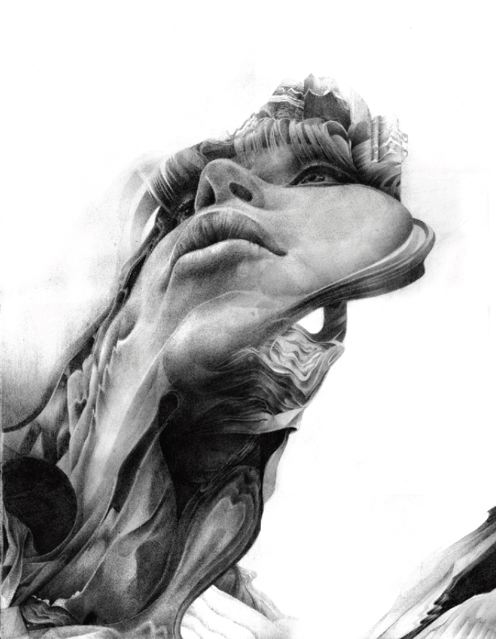 AM: Can you tell us a little about this new body of work? How did you choose the title of the show “Semblance” and was there a message that you were trying to get across?

HV: The new body of work that has become “Semblance” came out of a lot of experimenting I did at the beginning of the year in my spare time. I really wanted to push what I was doing with the geometry and construction of images. Right now, it feels very much like I’ve just scratched the surface with this as a series and I’m really excited to spend time exploring it further.

With regard the title “Semblance” (meaning “an assumed or unreal appearance, the slightest appearance or trace, a spectral appearance; apparition”) it just seemed to sum up in one word what I was doing. I’m not one for long or elaborate names to any of the work I exhibit, preferring the images to be taken as is without the influence of a title.

AM: How does your creative process work?

HV: There’s a lot of rough sketching, just shapes and note-making to try and distill what I’m seeing in my mind onto paper. From there a lot of experimenting is done on my Mac digitally before then producing the work by hand. 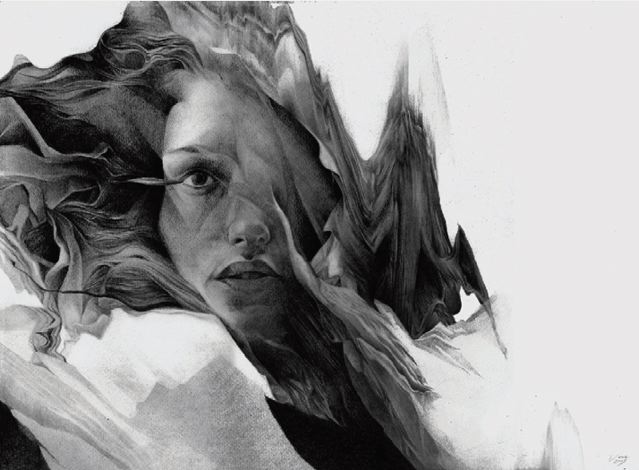 AM: I see that there is an interesting mix of realistic and abstract elements to your work. What are you trying to say with this technique? How do you decide how much to do of each, to reach a balance?

HV: A lot of inspiration comes from nature – for example, the areas of the earth untouched by human influence as seen in the amazing aerial photography of Bernhard Edmaier. I remember as a kid playing with a ball of Blu-tack, rolling it in my hands until it became warm and malleable then pulling it apart being fascinated with the little world it created as the strings and caves grew, stretched, sagged and intertwined before me. That fascination still plays a big role, seeing past what the object is in its functional form to more closely examine its shapes, surface, contours and tone. You could put macro shots of a cliff, a tree, some paint, a plastic bottle, bubblegum, cloth and a human body and they could all work together by only concentrating on their structure and tone.

Another huge influence is music – the atmospheres, juxtapositions of different sounds, textures, etc – all of those things conjure up very strong visuals to me. The abstract shapes and distortion in the artwork is my way of making those things visual, to define my own atmosphere and sense of energy. As for anything specific I’m trying to say with the work I offer no explanations, I prefer the viewer to take from it what they will. 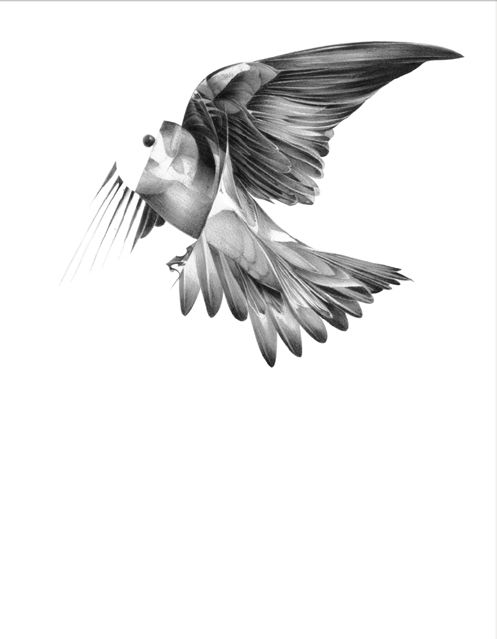 AM: You mentioned in a previous interview that you feel the lines between illustration and fine art are blurring. Are you still involved in both fields? What do you see in the future for you, meaning are you planning to concentrate more on your gallery work? How do you feel about the perception that a fine artist should not do illustration as it can be seen as “selling out?”

HV: I am still very much involved in both fields, and although the balance between the two is gradually shifting over time, the relationship between those fields has been very much symbiotic in my career to date. Personal, gallery work has allowed me to develop artistically and explore my interests without commercial constraint. In turn that personal work then generates commissions and over time the work I am commissioned for commercially and the work I produce as fine art becomes closer. It’s an organic and long process but I think both illustration and gallery work can be navigated side by side successfully if done with integrity – if you know what you are about, are aware of where it is you want to take things professionally and don’t accept jobs that would compromise that. For example, off the back of my “Animal” series of drawings I’ve been offered jobs for anything from pet medication campaigns to high end fashion textile design and as an artist I need to know what to say no to, look past a short term monetary incentive and protect what it is I want to grow into over the next few years.

With regard a fine artist “selling out” by doing illustration, it is a bit of a minefield and one which could be approached from a myriad of angles, with an argument for each. From my own personal experience of a commercial artist beginning to exhibit fine art, the purist idea of an artist supplementing their formative period by handing out flyers at clubs, being a waiter or working in a bar to keep their art in it’s cleanest, commercially untouched form until they break through with a successful piece/show seems silly to me.

I have spent the last three years drawing and painting pretty much six or seven days a week and I wouldn’t be producing the work I am without that. It is by doing that commercial work that I can support my first steps into the gallery circuit so I guess in that respect illustration has been my bar job. What better way to cut your teeth in producing artwork than to create images and practicing your craft everyday for years? To get hung up on preconceptions and how one market views another market to me seems very inhibiting. I learnt long ago when first starting out as an illustrator that the best work you produce is when you ignore what other people say is popular or the latest trend and just make what you love. If you create what you’re passionate about that’ll shine through and the rest will follow naturally.

The perfect example of the all the points above would be James Jean.

In terms of my future, I will definitely be concentrating more on exhibition work as the opportunities arise to do so, it’s something I’m really excited about both from the point of view of creating the work and just finding out more about the how that world works and how it is connected.

AM: Are there any other shows or projects you have coming up or are working on now that you can share with us?

HV: I’m going to be working on new paintings in colour as part of the Semblance series – one of which is scheduled for the StolenSpace Christmas group show. New originals are scheduled for sale on both the soon to be relaunched WIWP site and my own online store ShopVon. I will be collaborating with the great NY based photographer Timothy Saccenti to produce a one off piece which will be exhibited next year as part of the Collaborate exhibition curated by If You Could.

AM: Thanks for your time Von and good luck with the show.