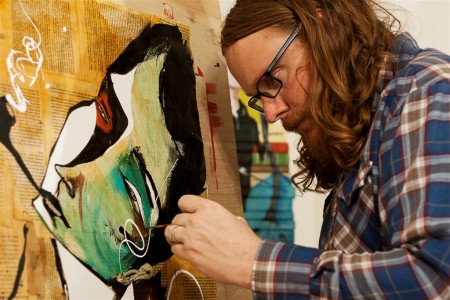 Los Angeles based fine artist Mike Stilkey will be having a solo exhibition at David B. Smith Gallery in Denver, CO, this coming Friday, September 18th, from 7-10pm with Stilkey in attendance at the opening reception. This is Stilkey’s first solo show with this gallery and the artist will have 20 new pieces, including book sculptures and paintings, and he will also be creating an impressive on-site installation.

Read on after the jump for a brief interview with the artist as he was in the final stages of preparation for “Words Fail Me,” as well as some additional photos from his home studio and a few sneak peeks at finished pieces from the show. 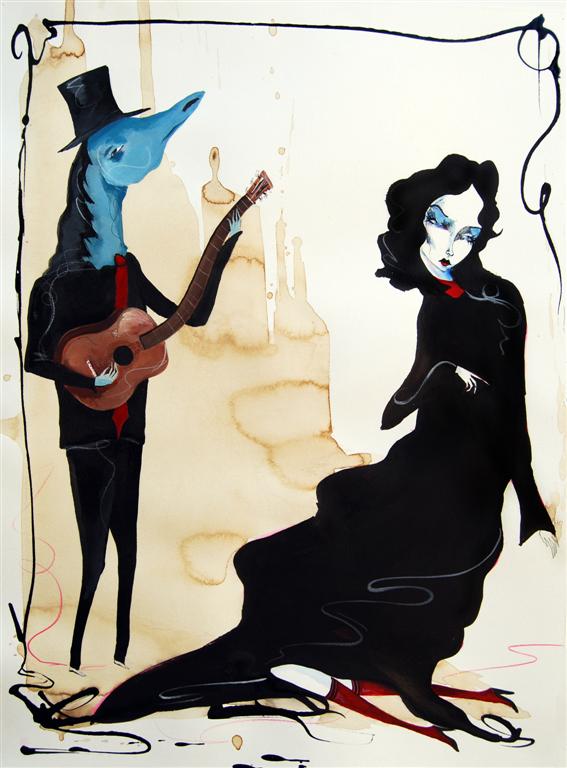 Utilizing a mix of ink, colored pencil, paint and lacquer, Stilkey’s work features a melancholic and at times whimsical cast of characters, with an aesthetic reminiscent of Weimer-era German expressionism. Inhabiting an ambiguous environment, his subjects convey a lingering sense of loss and longing. Stilkey reaches beyond the formal confines of painting and drawing, using such materials as record covers, book pages and book covers to create the spaces in which his characters exist. The artists work melds the visual world with the literal. Examining the limitations and interchangeability of the communicative process, Stilkey’s work reinvents the canvas to push boundaries between words, visual art and music.

Stilkey hasÂ exhibited his work in art fairs and galleries throughout the world, including exhibitions in Los Angeles, Miami, New York and Switzerland. 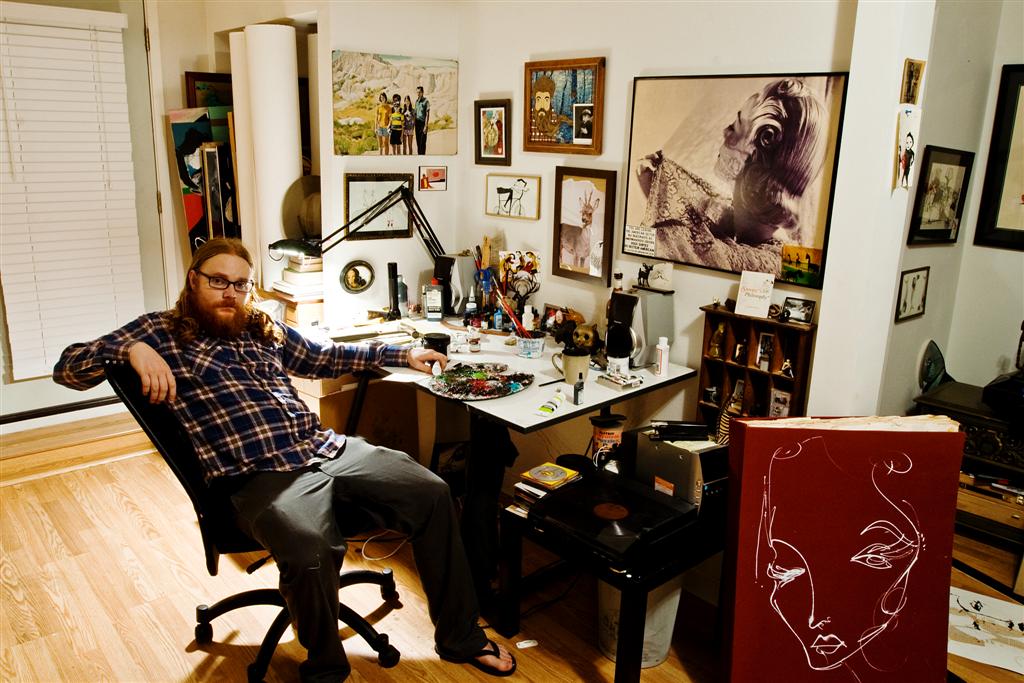 Arrested Motion (AM): Please talk a lil’ bit about the general idea/vibe behind your new series of works for the ‘Words Fail Me’ show with David B. Smith up in Denver.

Mike Stilkey (MS): I was inspired by my work on books and mixing the visual world with the literal. In my mind, these two areas are highly related. This realization made me think about what images and words represent, and the ways in which these are used to communicate or express certain things. The pieces in the show, whether they are book sculptures, paintings, or works on paper, all reflect this idea of words being more than just words. To expand what I’ve been doing with the books, I will also be exploring the boundaries and relationships between words, visual art, and music. I’ll be doing a pretty interesting installation that is going to tie all these things together. Here’s a hint: it’s going to be very heavy but will sound beautiful.

AM: Where do you get all those books?

MS: When I first moved to Altadena, I visited a local library and asked them if they had any books they were going to get rid of. They didn’t seem too into the idea of donating books to my cause until I showed them some pictures of what I do with the books. Now, when they have leftovers from any of their book sales, they let me pick through what didn’t sell and take home any books that I want. I also look for free books on craigslist or hit up thrift stores occasionally. I really try to use books that are being discarded so I can give them a second life. 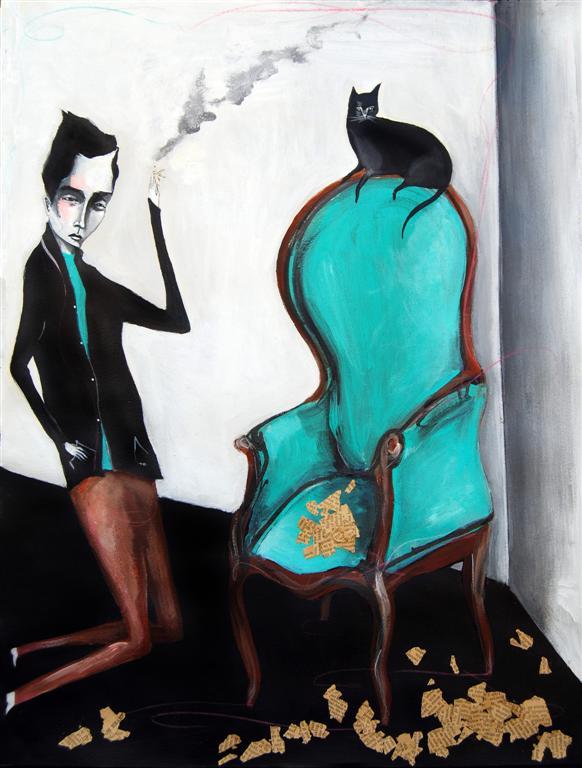 AM: Speaking of books, how did your installation, “When The Animals Rebel”, with the Rice University Gallery down in Texas come about?

MS: Kim Davenport, the director of Rice Gallery, was in town and saw one of my book sculptures displayed at BLK/MRKT Gallery. She called me while she was at BLK/MRKT and said, “you have to come to Texas and do the same thing at our gallery.” At the time, I was really sick and didn’t think much of the call until I did some quick research on Rice Gallery. I was dumbfounded that they would seek me out to do an installation. They flew me out the next week for a planning meeting.

The next thing I knew, I was standing in front of a 16 by 44 foot wall and wondering how I’d gotten myself into this situation. I told them, “you do realize that the biggest book sculpture I’ve made so far is only about 2 feet tall, right?” Kim said, “we don’t care, we know you can translate that to a much larger scale. Here are two assistants to help you make it happen.” The rest is history. When the show came down we had to make a decision as to where the 5,000-plus book installation was going to go. The Fondren Library at Rice University stepped in and bought almost the entire piece. It is the first piece of art the school ever bought. Now it’s a permanent installation in the library. 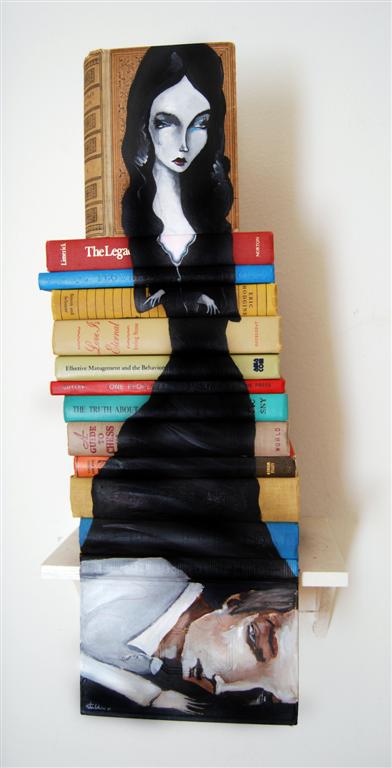 AM: What do you consider your biggest overall influence?

MS: Definitely music. This is the biggest inspiration for me. I love all kinds of music, from sad bastard songs to jazz to black metal. No R&B, though. I listen to it all day while I’m working in my studio. Sometimes I hear a song and I can visualize a painting that goes with that particular song. I also love old weird discarded items, like old cameras, books, records, knick knacks, etc. I feel like they all have a story behind them or some kind of history and I like imagining what that might be.

AM: Please describe a perfect day in Mike Stilkey’s world.

MS: It definitely would include a burrito, coffee, beer, pool tables, my wife, some cats, and a nap. Oh yeah, and some painting mixed in there somewhere. 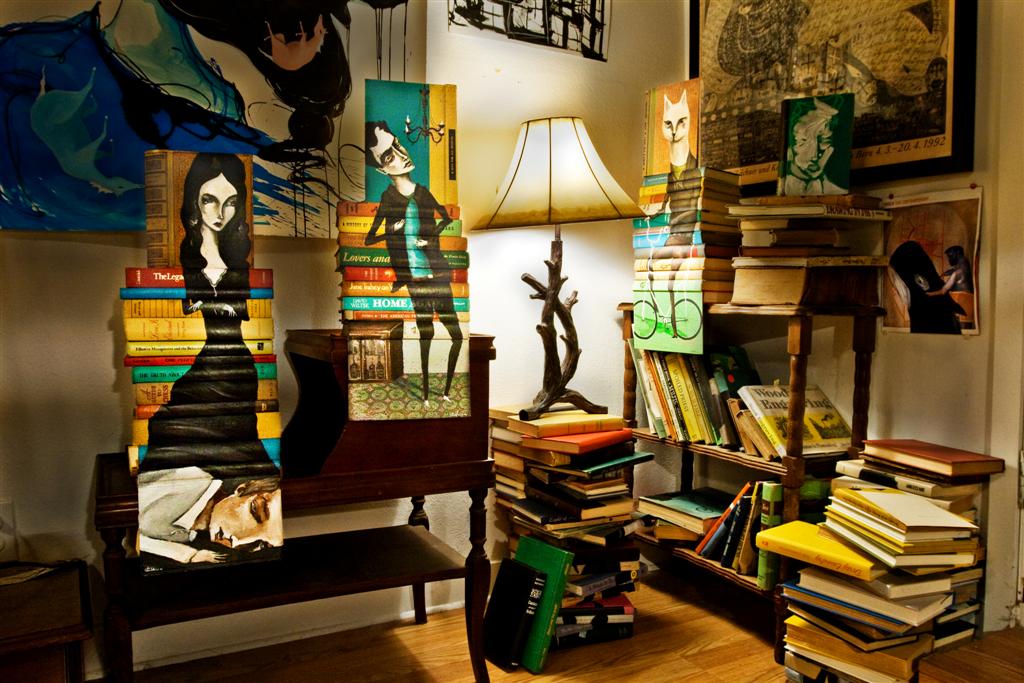 AM: I’ve heard you are quite the pool shark. Is that your release from being in the studio most of the time?

MS: Yeah, I play some pool. It’s probably the best release from art that I’ve found. I’m not the kind of guy that can sit in my studio and work for 15 hours straight. I start getting antsy at the 5 to 6 hour mark. That’s when I go play pool for a few hours. It’s probably the most interesting game I’ve ever played and there is so much to learn about it. Plus, it completely gets me out of my head and helps me unwind and not overthink things. Kind of like inexpensive therapy. 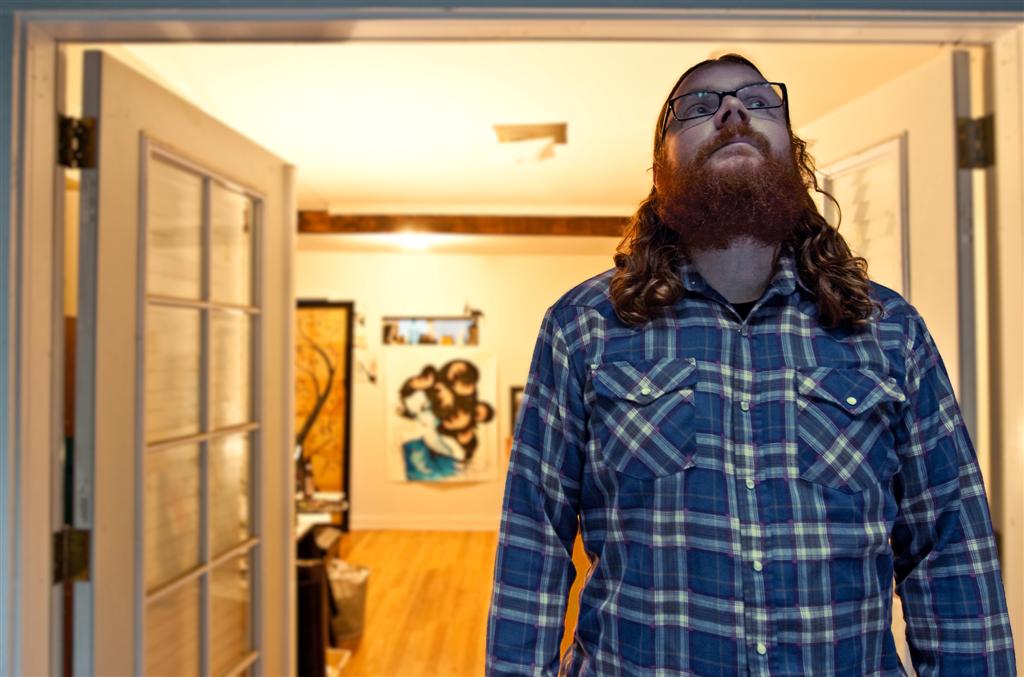 AM: What’s next for you after you open “Words Fail Me”?

MS: I have a few pieces in a show in Aigues-Mortes, France, that is coming up in October. I’m really excited about the show because it is going to focus solely on art that incorporates books. To my knowledge, this is the first show that has done this. Unrelated to the show but in a similar vein, I am going to be featured next year in a book showcasing artists who use books as their medium. I’ll be posting periodic updates on my website, so stay tuned.

AM: Thanks for your time Mike and good luck with the show.