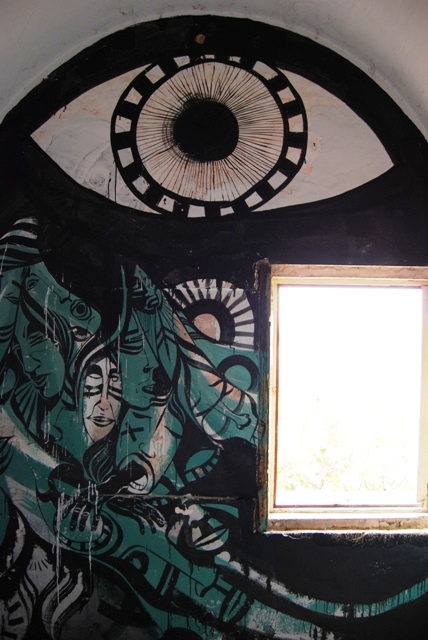 After months of following the goings on at Italy’sÂ FAME Fest (see our coverage here), AM decided to take a trip to Grottaglie to find out if all those pieces were really as incredible as they appeared.

Letâ€™s just say that we were far from disappointed. From the murals painted within the ancient monastery and on the walls around town to the fantastic private preview dinner and packed opening night reception showcasing work from all the artists, FAME is every street art fanâ€™s dream come true. Many thanks to organizer Angelo and his assistant Giorgio for making us feel so welcome throughout our stay. Weâ€™ll be back in 2010!

We were originally planning to show you a selection of photos we took, but decided it would be more fun to invite you to share our trip to the monastery. We’ve tried to give you a sense of what it feels like to wander around and stumble upon all the wonderful workÂ (both from this year and last)Â that lies within this unlikely structure.

Join us after the jump! 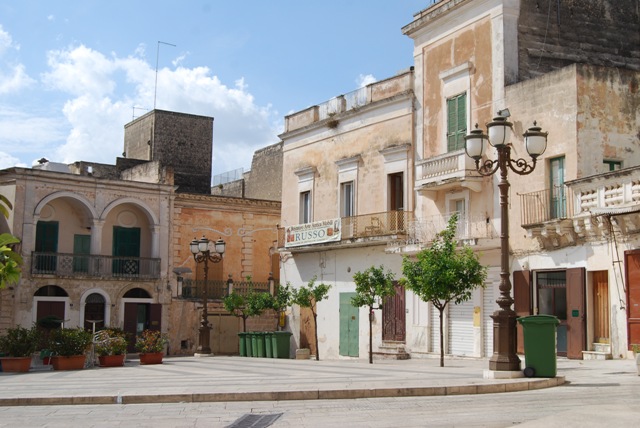 The day began when we were met by our guide Giorgio at the beautiful Piazza Regina. We jumped into his tiny car and headed off! 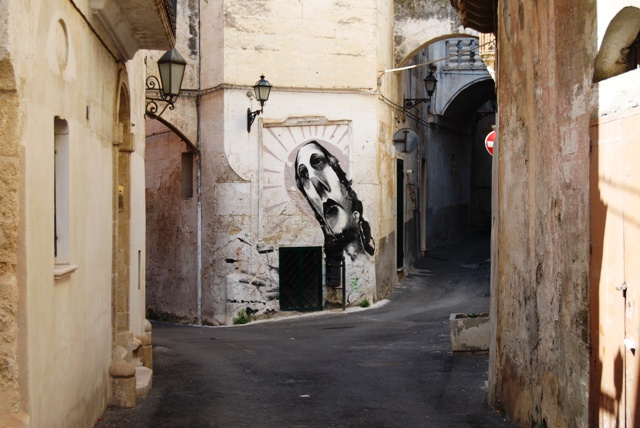 As we zoomed down the narrow streets, we spotted this great Ethos piece from 2008. 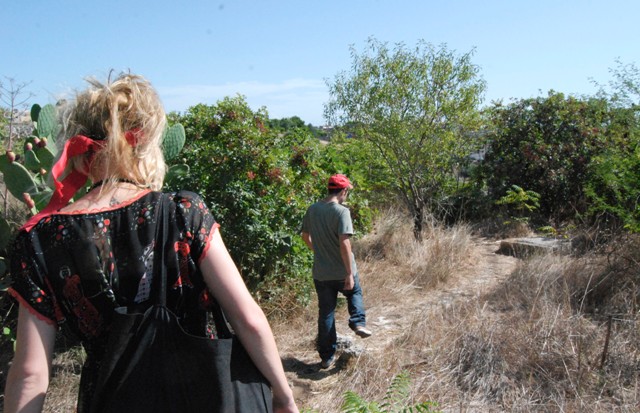 After driving to the outskirts of town, we got out of the car, climbed a steep hill, scaled an ancient stone wall, and made our way along a twisting, overgrown path. 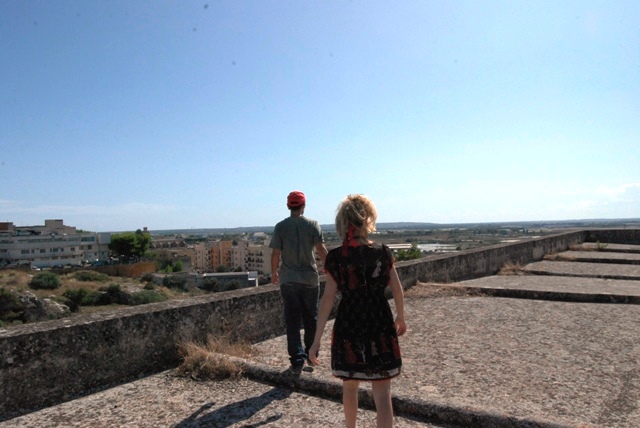 The path eventually led us onto the rooftop of the monastery. Nice view from up there! 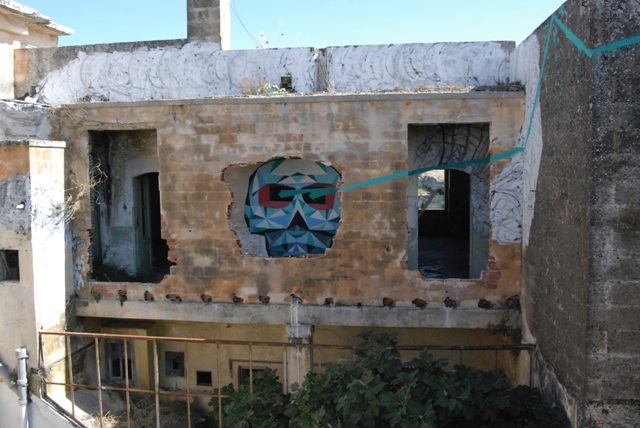 We glanced to the right and were thrilled by what we saw – the remains of Blu and David Ellis’ work for their animation piece “Combo”! 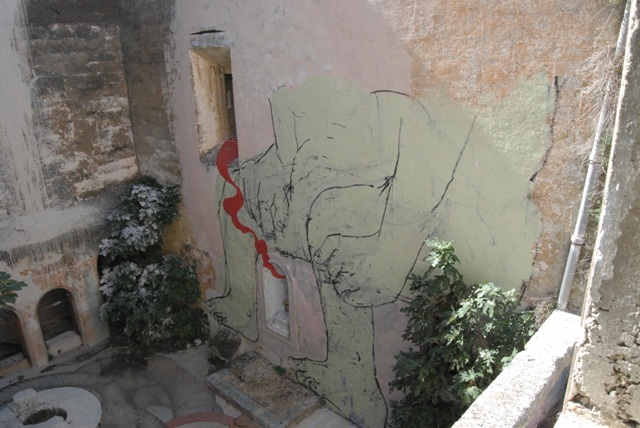 Then we glanced down and got even more excited! You should definitely check out the video if you haven’t seen it yet. 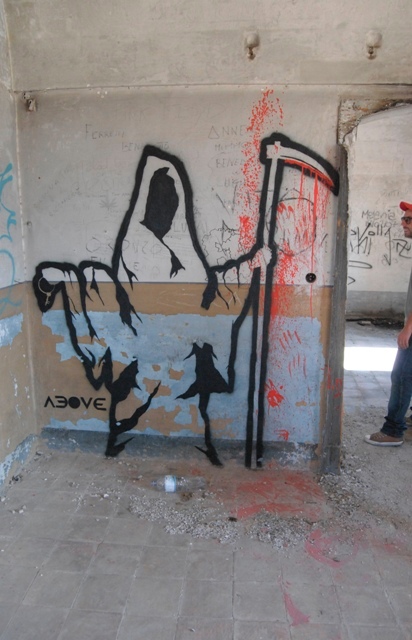 We squeezed down a narrow set of stone steps and into the monastery, where we were greeted by a piece from Above. 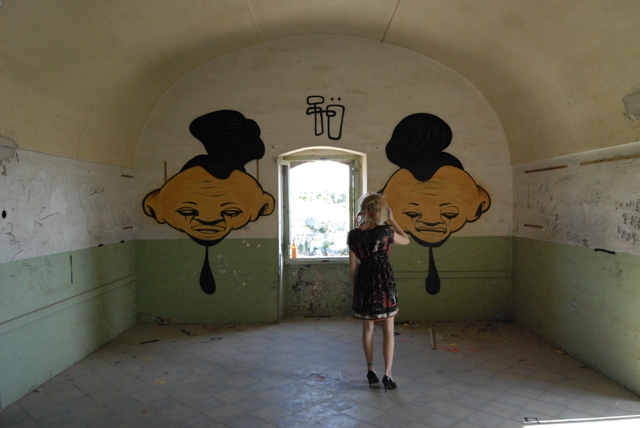 Very cool piece by Bo130. (Yes, in case you were wondering, AM climbed a stone wall in those shoes.) 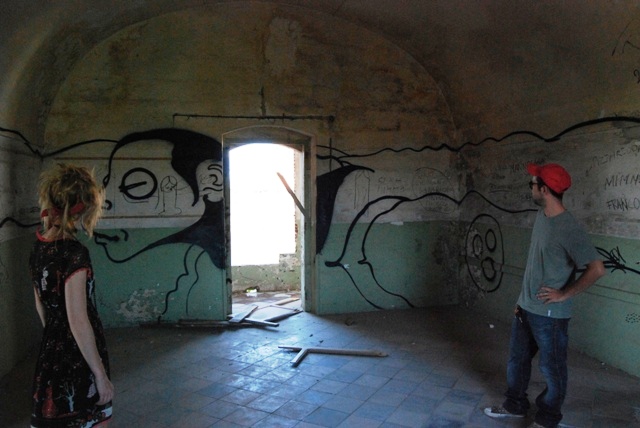 We weren’t sure who did this piece, but thought it was interesting. The character extends around the wall. 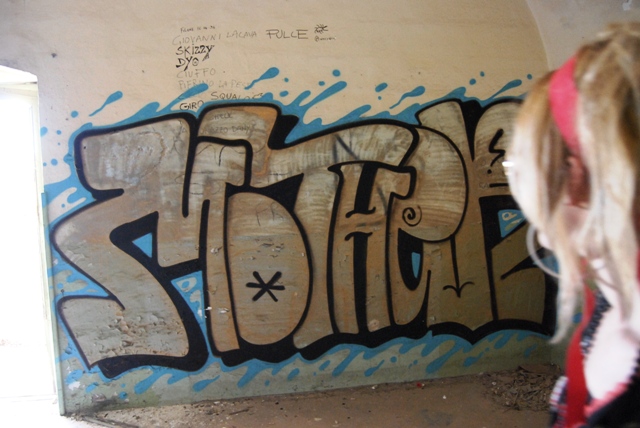 We did guess who did this, however, and couldn’t wait to find the room that contained his character piece. 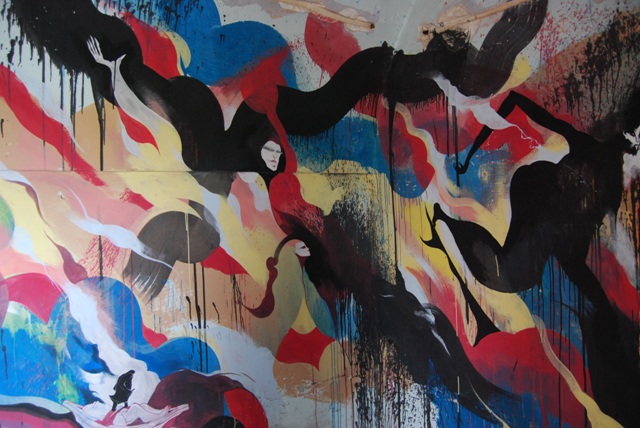 We heard voices in the distance, and rushed down the corridor to find out who it was. We stopped off in Will Barras’ fantastic room along the way. 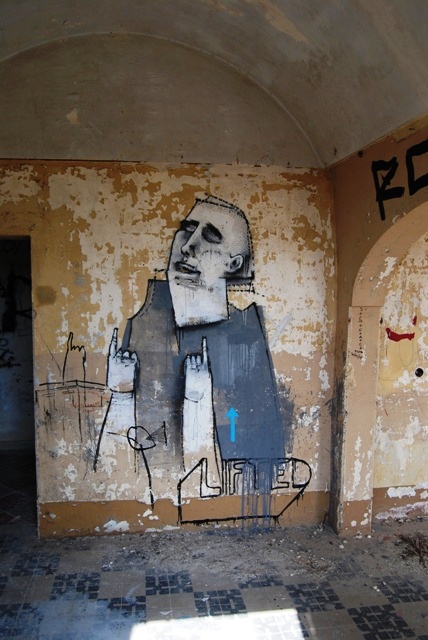 Next we found the Word To Mother! WTM returned to Grottaglie for Fame’s preview party the next day and it was nice to spend some time with him. 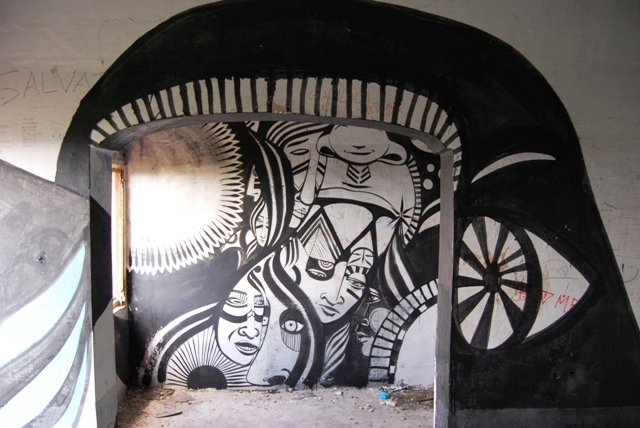 The voices turned out to be that of Lucy McLauchlan and a friend. Lucy was putting the finishing touches on this incredible room, which she painted floor to ceiling. 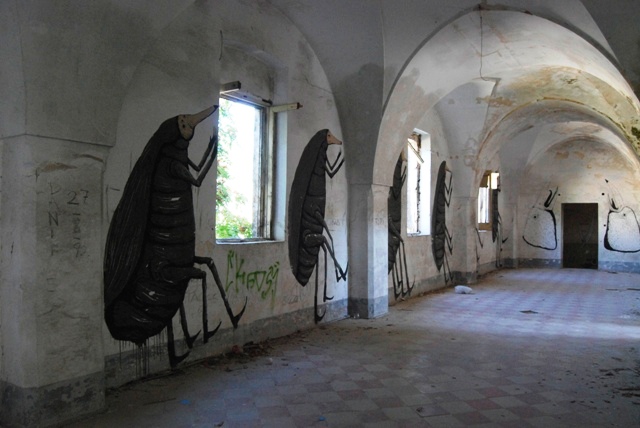 Our jaws dropped when we entered this hallway. There was something magical about the way the light was streaming in between the giant insects. Made us all feel a bit inconsequential.Â 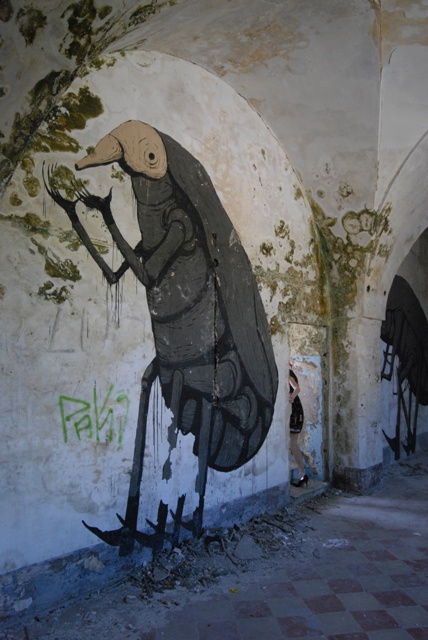 After spending way too much time with the bugs (notice that the one above is eating the moss on the wall?!), we discovered the room that held… 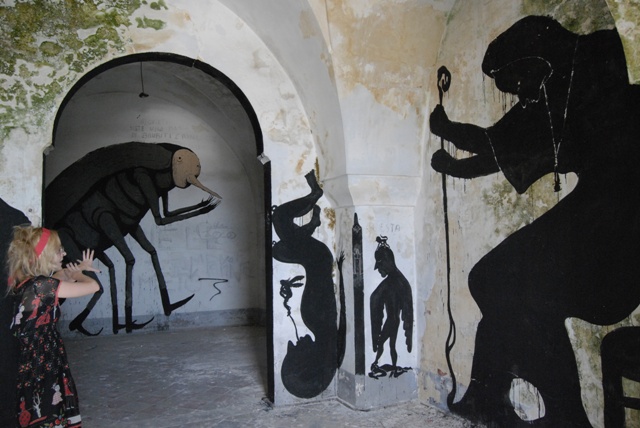 …the work of Sam3! As you might ascertain from the broad gesticulations, AM was thrilled by what she saw. 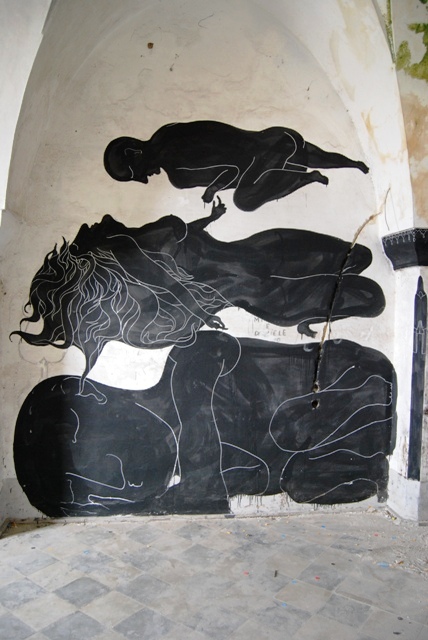 More Sam3. This one is so serene in person. 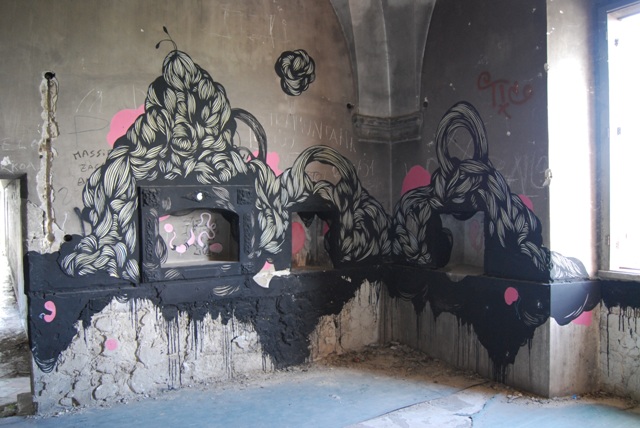 Crazy collab from Bo130 and Microbo! 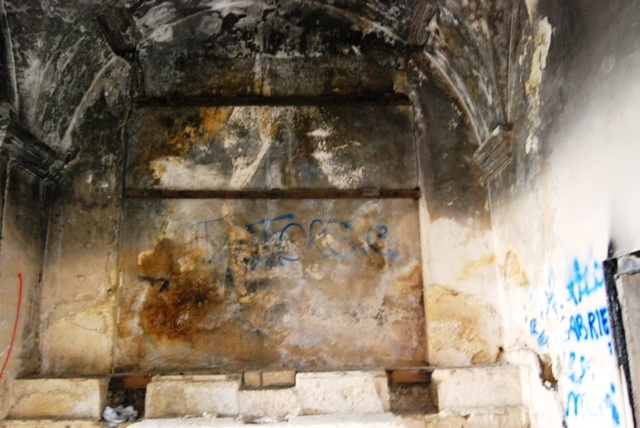 We soon made our way down into the chapel and found two Vhils pieces so good you could barely even see them. Here’s one of them. 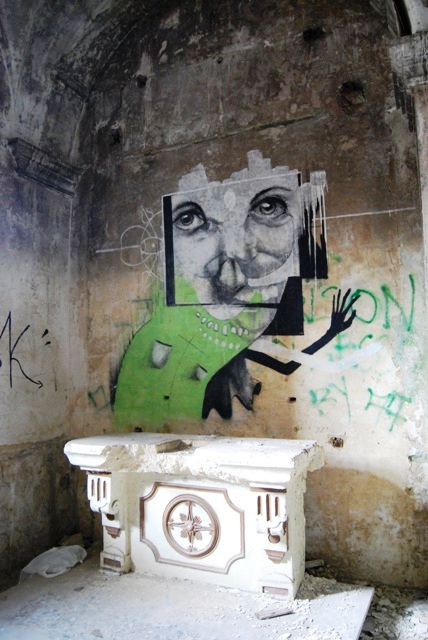 A happy little piece by Ethos peeked out from the other corner. 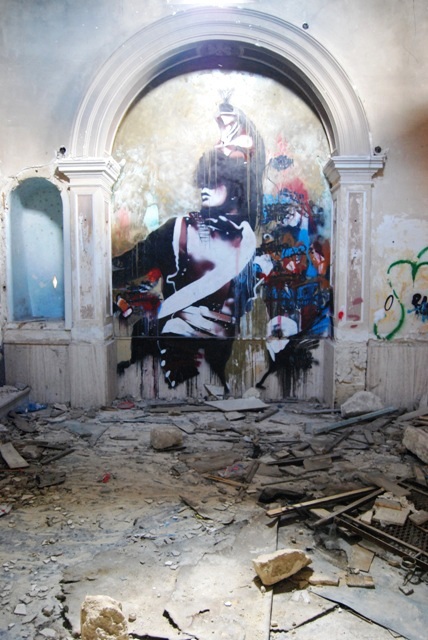 Across the room, an extraordinary Conor Harrington dominates the space. His skill and placement are breathtaking. 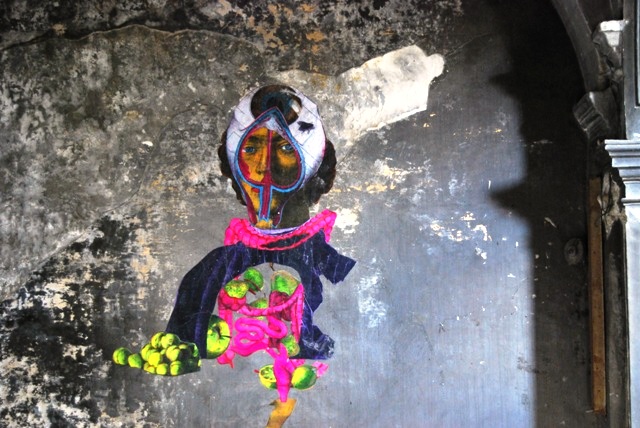 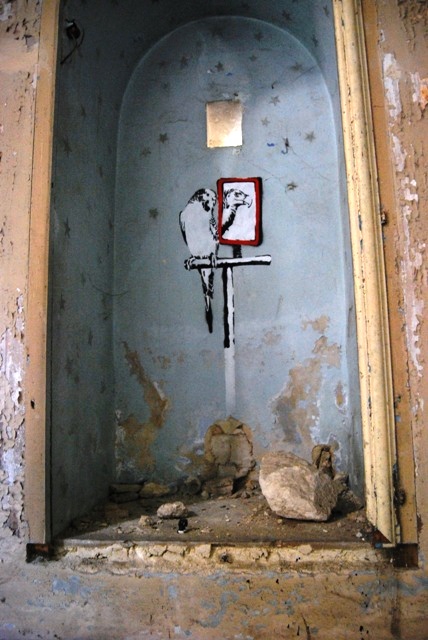 … and on the other by a small but clever piece by Mantis. 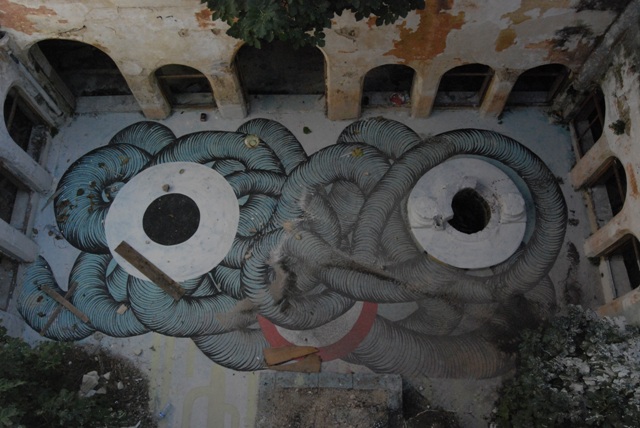 After a few more hours of wandering around and returning to some of our favorite spots, we headed back up to the roof and said goodbye to the Blu/David Ellis smiley face in the courtyard and all the work that lay hidden in the rooms around him. We had an amazing time in the monastery and hope you did, too!