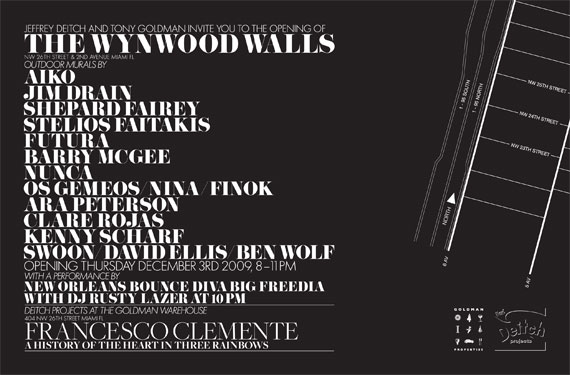 Deitch Projects has assembled an astounding roster of artists – including Aiko, Shepard Fairey (featured), Barry McGee, Os Gemeos and Swoon (interviewed) – to participate in its Art Basel Miami ’09 Wynwood Walls project. According to the press release, a major property owners in Miami’s Wynwood art district has made available a group of walls and buildings on which the artists can create murals. The project also includes an indoor space where paintings by several of the artists and documentary photographs by Martha Cooper (interviewed) will be exhibited, and a special project by Shepard Fairey, produced by Christian Strike and Country Club, presented in conjunction with the Miami Art Museum and the Fountainhead Residency.