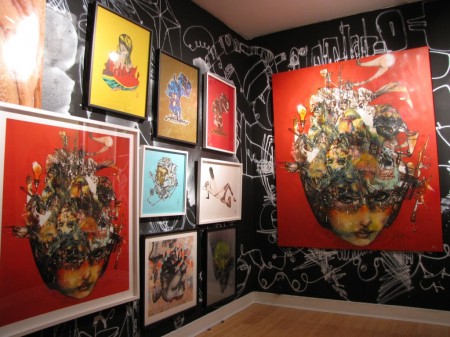 David Choe opened his latest show, “Character Assassination” last Thursday night at FIFTY24SF. Choe, who has deep ties with both the Bay Area, as well as the Upper Playground family, brought an incredibly large turnout for his long awaited SF return. The reason attendees waited for upwards of thirty minutes to check out the show? Mostly because it was awesome! David came with enough artwork to fill two galleries, giving fans a chance to check out almost every limited edition print he’s ever done as well as the opportunity to view a whole new body of work. Since our initial visit to his studio last week, David has put together an impressive lineup of small and larger works, his use of darker backgrounds and plenty of red paint convey the bloody assassinations of his personal and figurative characters, an odd subject really for an artist who’s been nothing but on the rise.

Full show pieces after the jump.