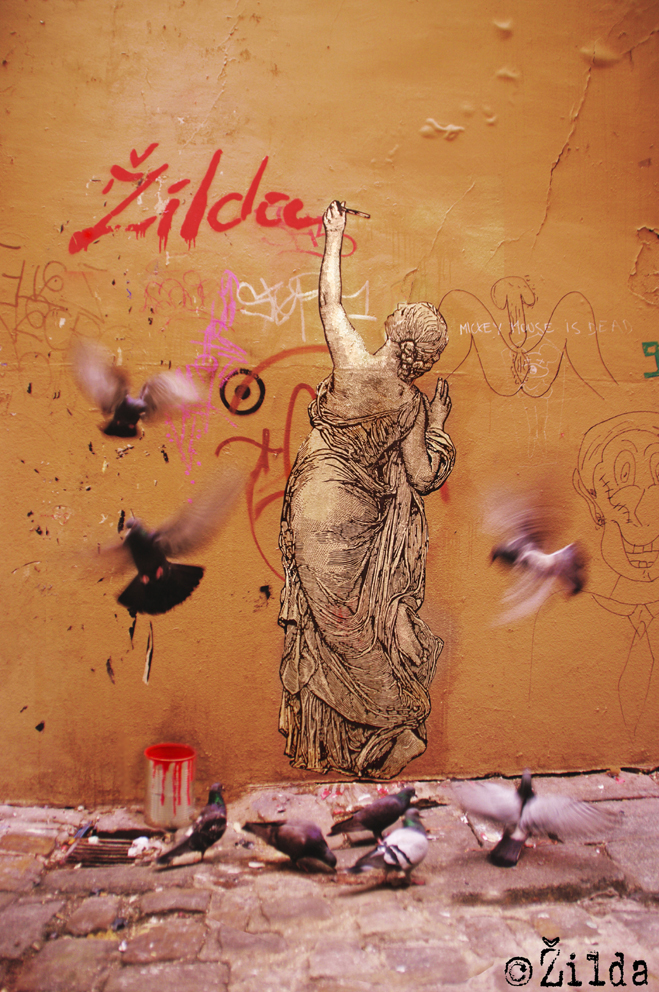 French artist Zilda’s classically influenced street work are inspired by old books and works of the master painters and sculptors of the past. With such a wealth of material to refer to, it was somewhat surprising to find out that his work is all originally hand-painted. We talked about his history, technique, and future,  among other things in our interview – all after the jump. 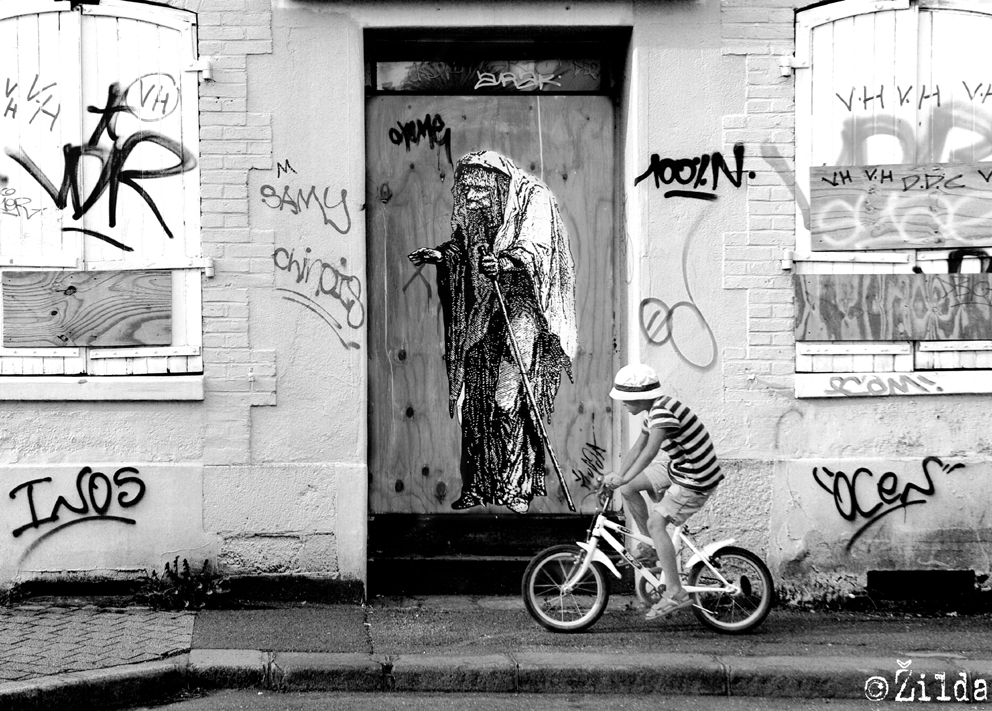 Arrested Motion (AM): Can you tell us a little about yourself (where you are from, your background, whether you have any formal art training)?

Zilda: I come from Rennes (West of France) and I’m self-educated. I quit school early to travel all over Europe. I made a living by selling pictures I painted on my way. So far, my life has been a bit rough around the edges… Before engaging in painting, I was alternately a punk, a beggar, depressive, an activist and a librarian. 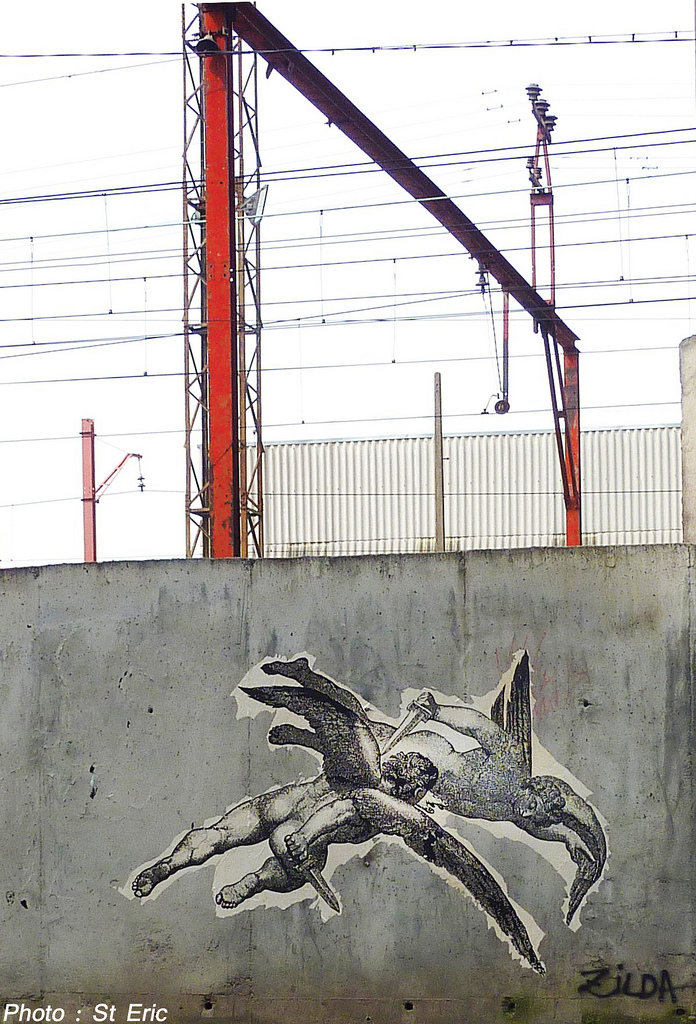 AM: What inspired you to create your recent series, taking your version of classical sculpture and paintings to the streets?

Zilda: That’s a passion for old books and popular press which brought me into contact with a whole set works (engravings, prints, sketches…) that are forgotten or little known from the public. I can’t stand the idea that those pictures are exclusively owned by collectors, bourgeois libraries or museum archives.

My work is based on a mythological, literary and pictorial iconographic corpus and pays tribute to many illustrators that history unfairly forgot. In some ways, I want founding myths to interact with our puritanical contemporariness [sic]. 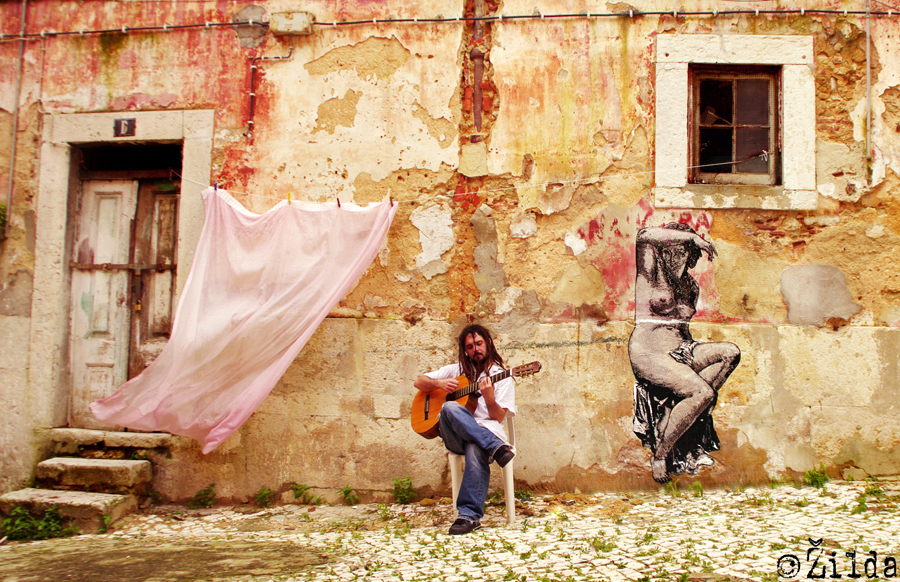 AM: There is a certainly a rich history of French street artists – Blek Le Rat, Miss Van, Jef Aerosol, JR – to name a few. Are there any that you admire or are influenced by their work?

Zilda: I’ve got only one inspiration as far as street art is concerned. And that is Ernest Pignon Ernest. I like the radicality of his work, the strength of the themes he deals with and so, the great respect he has for the public.

He is a man who brought important issues in public view …

AM: Can you tell us a little about your technique? Do you draw all your own work?

Zilda: I think it’s very important to paste up only original paintings (made on paper) in the street. People seem to be concerned about the fact that this amount of work is doomed to deletion. I would say that what I do in workshop is like “pictorial cooking”. It’s some kind of grub that tests the effects of calligraphic nib, posca, eye liner, cotton buds… 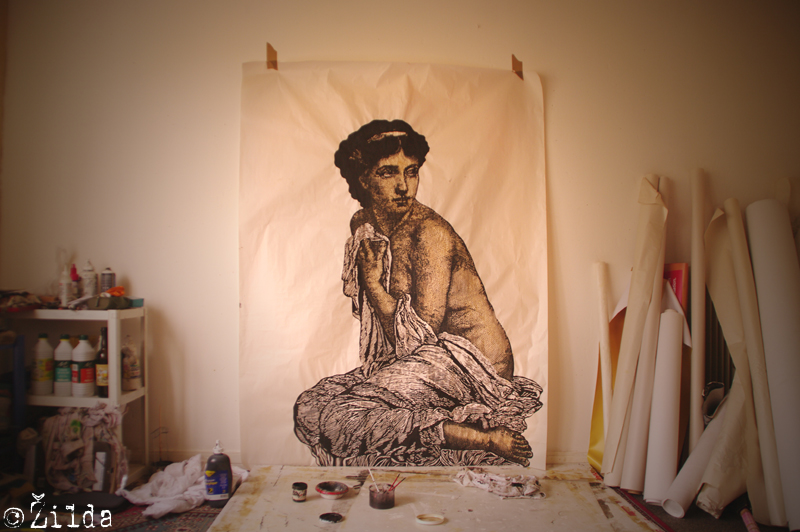 AM: Any shows or projects for the rest of 2010 that you can share with us?

Zilda: I’m going to carry on the « unproductive expenditure », devoting my time to creating for the transient… I intend to revive and stage some founding myths found in the “Ovide’s Metamorphoses” on the walls of different cities.

At the same time, I am working on a plan [Palimpsest] in Rennes (dedicated to the transient too). I will ask several artists to express themselves about a same wall : http://palimpseste-rennes.blogspot.com/