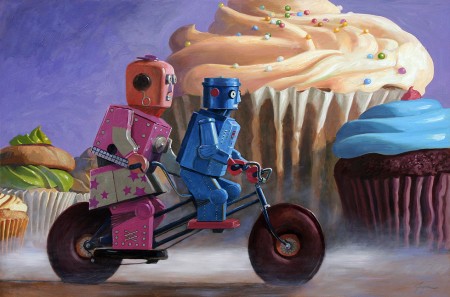 As we mentioned a couple weeks ago, Eric Joyner will be opening his newest show at Corey Helford this Saturday, August 14th. We had the opportunity to get together with Eric for a session of questions and answers as well as getting an advanced look at some of the pieces in this show. He took time to explain his subject matter, talk a little about his influences, and much more.

Check the full interview after the jump…

Arrested Motion: We know this must be a question asked for every interview but we can’t resist. Why the robots and donuts (although cupcakes are introduced for this show)?

Eric Joyner (EJ): When I decided to become a gallery artist some 10 years ago, I made a rule for myself that I would only paint things I like. I started with tin robots around 1999 because they met the criteria of me liking them, and had been collecting them since the mid 1980’s. Also, it was cost-effective… no need to hire models or rent costumes. The donuts were added in 2002. I had been getting a bit bored just painting robots & started to try and think of what to add. Then while watching the movie Pleasantville, I was inspired by the scene where Jeff Daniels paints a still-life of donuts. This, in combination of being a big fan of Wayne Thiebaud, donuts, and the fact that the combination made no sense, I started the painting “Glazed” the next morning.

AM: Are donuts actually your favorite food and do you collect tin robots? Or are they just reserved for your art?

EJ: Donuts are really great but I need other types of food as well. I like the various food groups equally 🙂 I started collecting tin robots while in art school… my friends & I would go to the San Mateo County fairgrounds annual vintage collectible shows as well as other shows. I have maybe 50 now… mostly the re-issued ones though.

AM: Occasionally, there are humans that show up in your imagery. Are they actually part of the world you have created or are they merely there to draw attention as contrast for your automatons in the re-enactment of some classic scene? What is the relationship like between the humans and the robots in your paintings?

EJ: The people are in the scene to show that robots and humans can live in peace. The people do seem to draw attention to the robots as well. Thanks for pointing that out 🙂 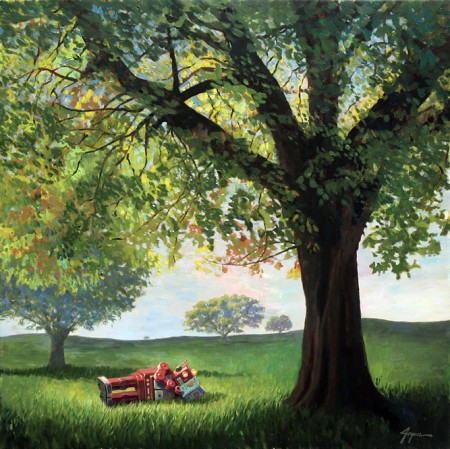 AM: For some reason, your work almost has a Norman Rockwell feel to it even though your subject matter is completely different. Are we completely off base or was he an inspiration for you? What other artists do you feel has influenced you, if at all?

EJ: When I was a kid I did have a Rockwell book… I liked it a lot. Almost everything about it. But I was not thinking about Rockwell when I became an artist…. by that time, I was more interested in Frazetta, J.Jones, N.C. Wyeth, The Brandywine artists, Andy Warhol & National Lampoon magazine.

EJ: I was a frustrated book cover artist… I always wanted to have sci-fi publishers as a client, but it never worked out. I do like fantasy, science fiction books and movies. I don’t get to read as much as I would like to though. 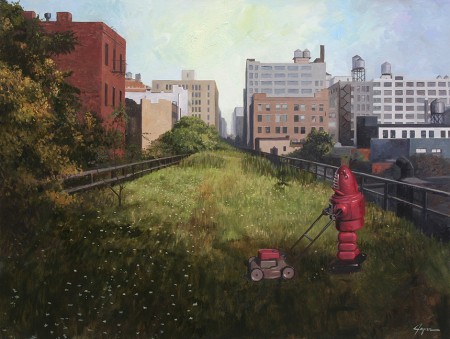 AM: Some of our favorite paintings of yours that we love is a series of pieces that involve robots in boxing rings. They certainly resemble those classic rock’em sock’em robots from Mattel (although your paintings flesh out a much more expanded story), but we also remember seeing a Dodge truck commercial several years ago that had robots that looked just like yours. We also noticed that you have done work for Mattel before, so now we are all confused. Can you clear things up for us?

EJ: I was an freelance illustrator for a number of years, and one of my clients was Mattel – I did a few Barbie packages. I never did the Rock em’ Sock em’ robots for them though. Never even had them as a kid. However, every so often a Mattel employee will buy one of my boxing prints at one of the various conventions I work.

A fan of my work, The Sneeze, asked me to paint the Rock Em’ Sock Em’ robots & that’s how that started. The painting, “The Final Blow” made the cover of an art annual called Spectrum. It was so popular I painted the whole fight (24 paintings) & called it “Tangle in Tin World” for an art show held at the Shooting Gallery in San Francisco in 2006. Some say my work inspired the Dodge Ram commercial. Dodge never contacted me, so I don’t know.

AM: Do you have any other shows or projects coming up that you can share with our readers?

EJ: Of course, I do have a show coming up this August 14th at Corey Helford Gallery in Culver City. The reception is from 7 til 10. I hope you can make it! In late October, I will open my art studio to the public (check ericjoyner.com events page) and I may be at the NY comic book convention as well as the Sanrio (Hello Kitty) 50th Birthday party & show.