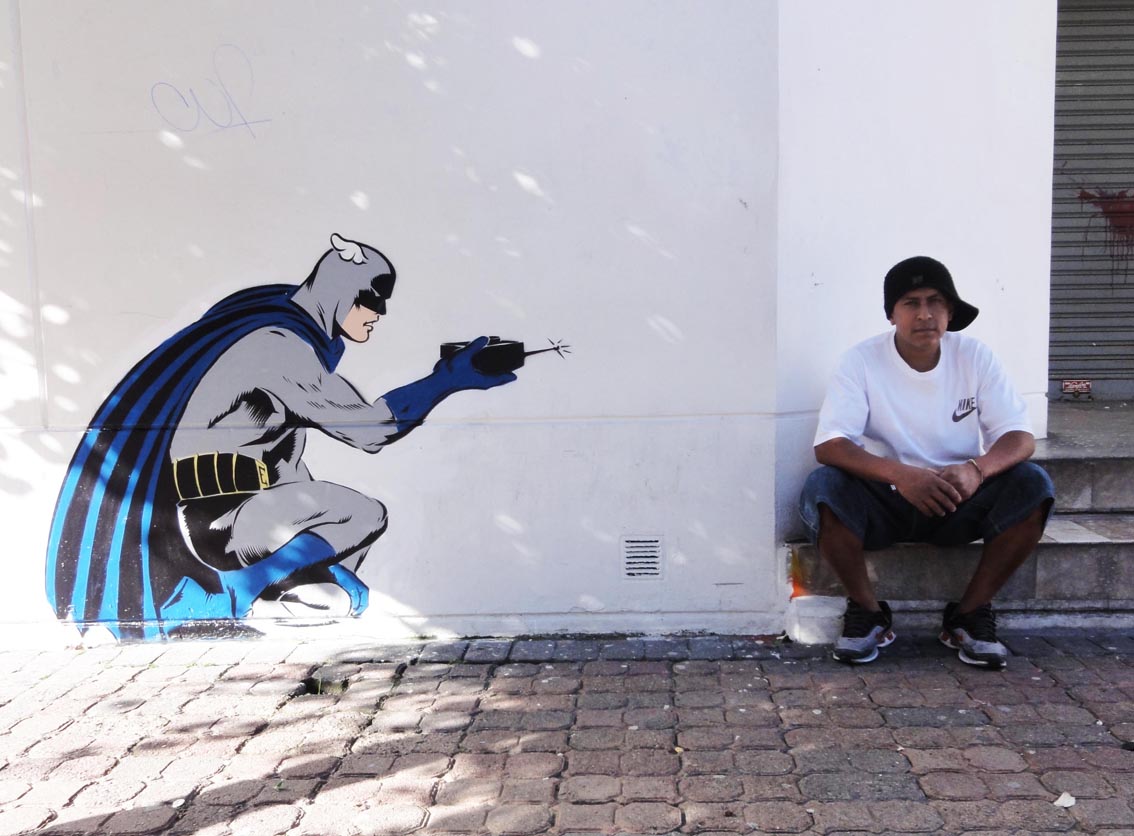 It seems that cans of paint are a valuable commodity in Ecuador and whilst we discard our empty cans and messed up caps without question where it is readily available, the local kids in Quito clean up the old tips and re-fill and re-pressurise the cans for a second life.

We last saw D*Face (interviewed) hitting Quito with posters and paste-ups around the city whilst trying to source some precious paint during his trip to Ecuador for the ‘9no Festival de Arte en la Calle’ in Part 1 of his travelogue for AM. Read on for part 2 of the travelogue after the jump, and also for details of your last chance to enter our exclusive *Face Painting Contest and Skate Deck Giveaway. 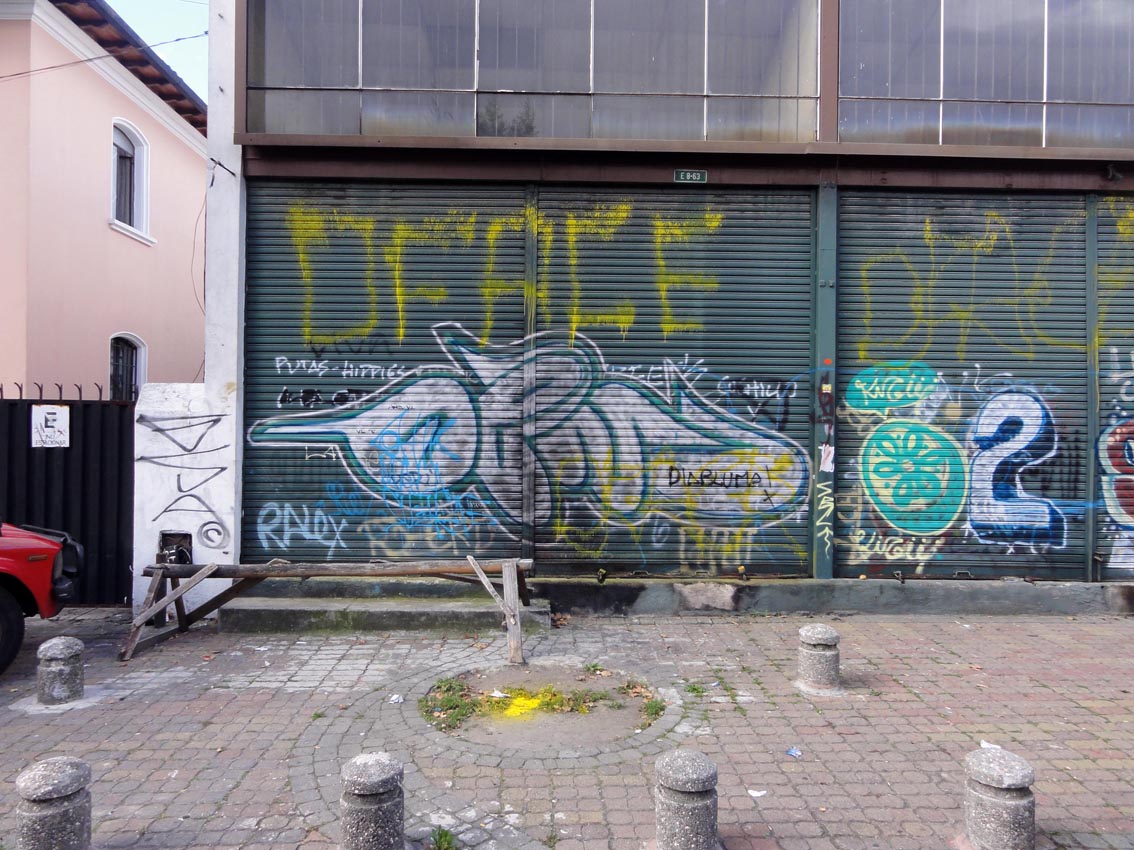 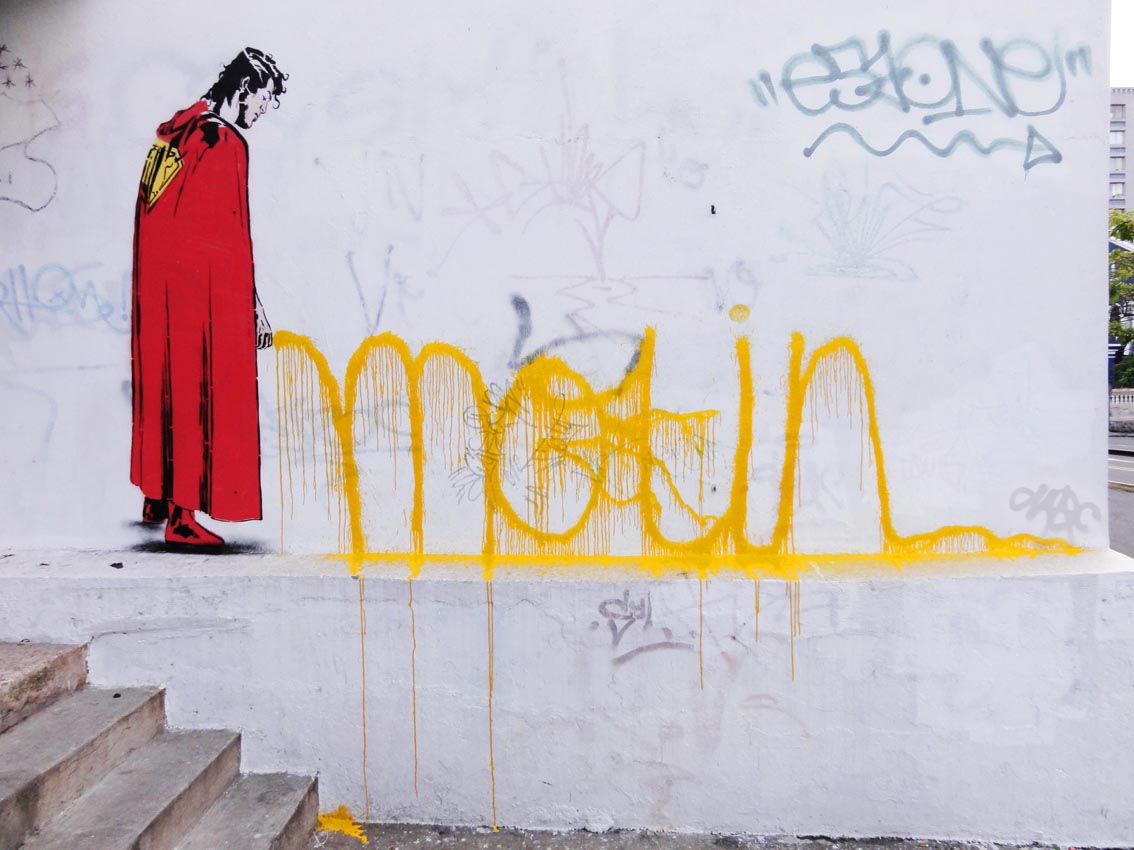 Spray paint was sniffed out, thanks to ‘Dinamo’ organizers of the event, their warning, don’t leave the paint out on sight, the local kids will rob it from you in an instant… and the cops wont do shit to help you…

Colours were thin on the ground, so a found fertilizer sprayer and tin of emulsion was put to good use… and a dose of practice… which doesn’t make perfect… Superman, who i’d long had planned was always intended to be piss writing the word RIOT, but it was pointed out that no one would understand this in Spanish speaking Quito, so a quick translation was given… ‘Motin’ meaning ‘Riot’… leaves nothing to be desired of my hand style.

Traveling around the city scouting and hitting spots, I kept spotting the tag ‘Vomitorium’ with an upside down cross as a ‘t’ which appealed to my warped sense of humor, it was also written with a ton of style, mainly using a squeezy bottle and red emulsion; it was ragged but full of flavour, when I asked around who it was, people laughed and said its a ‘Death Metal band’… ok so that makes sense… and that the artist responsible was a friend of one of the organizers and they’d put us in touch. Cool. 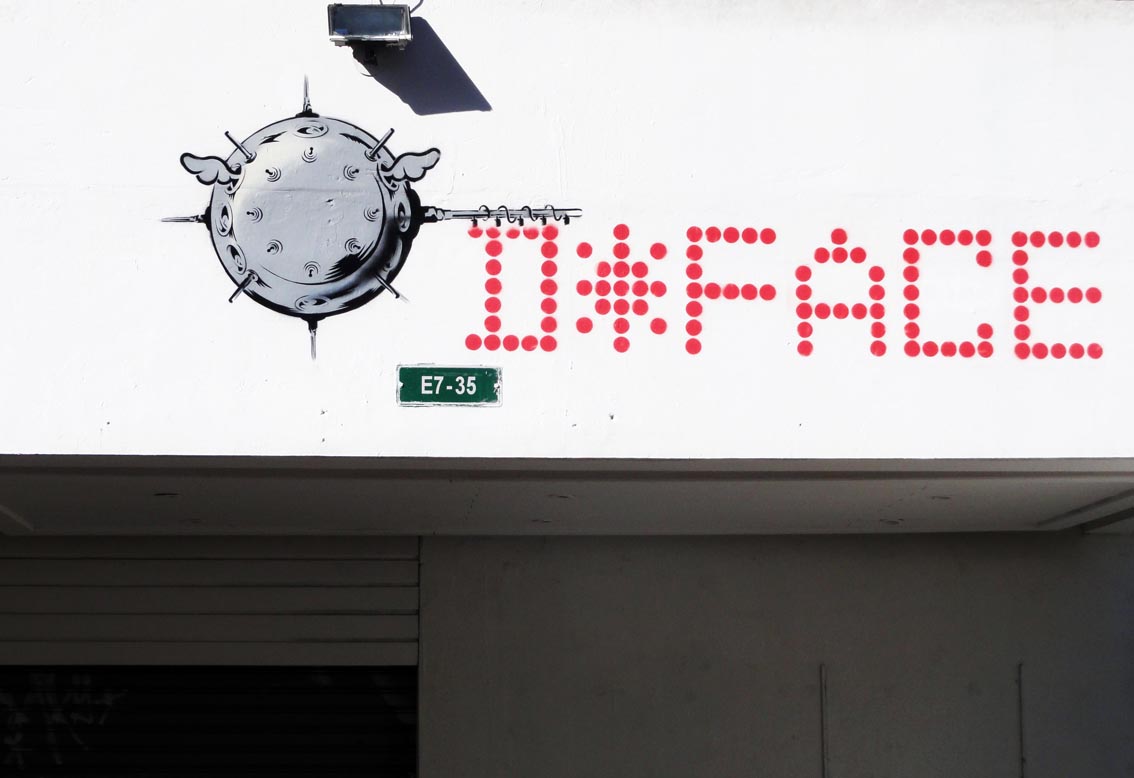 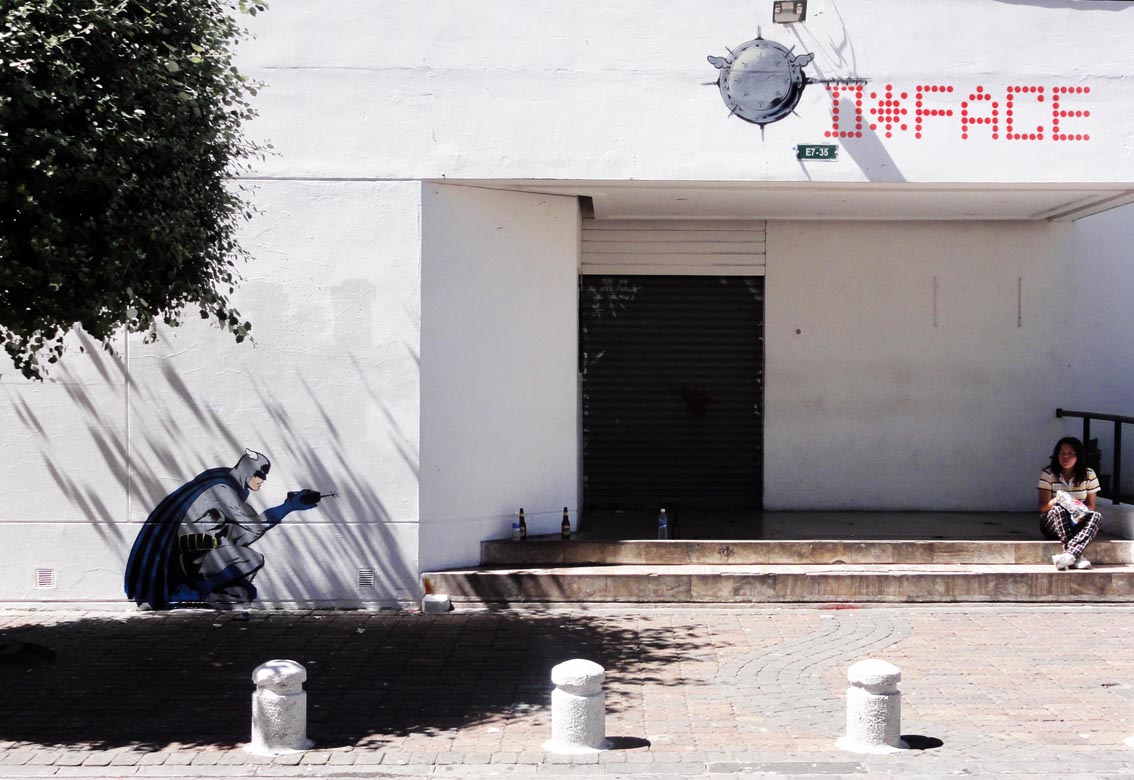 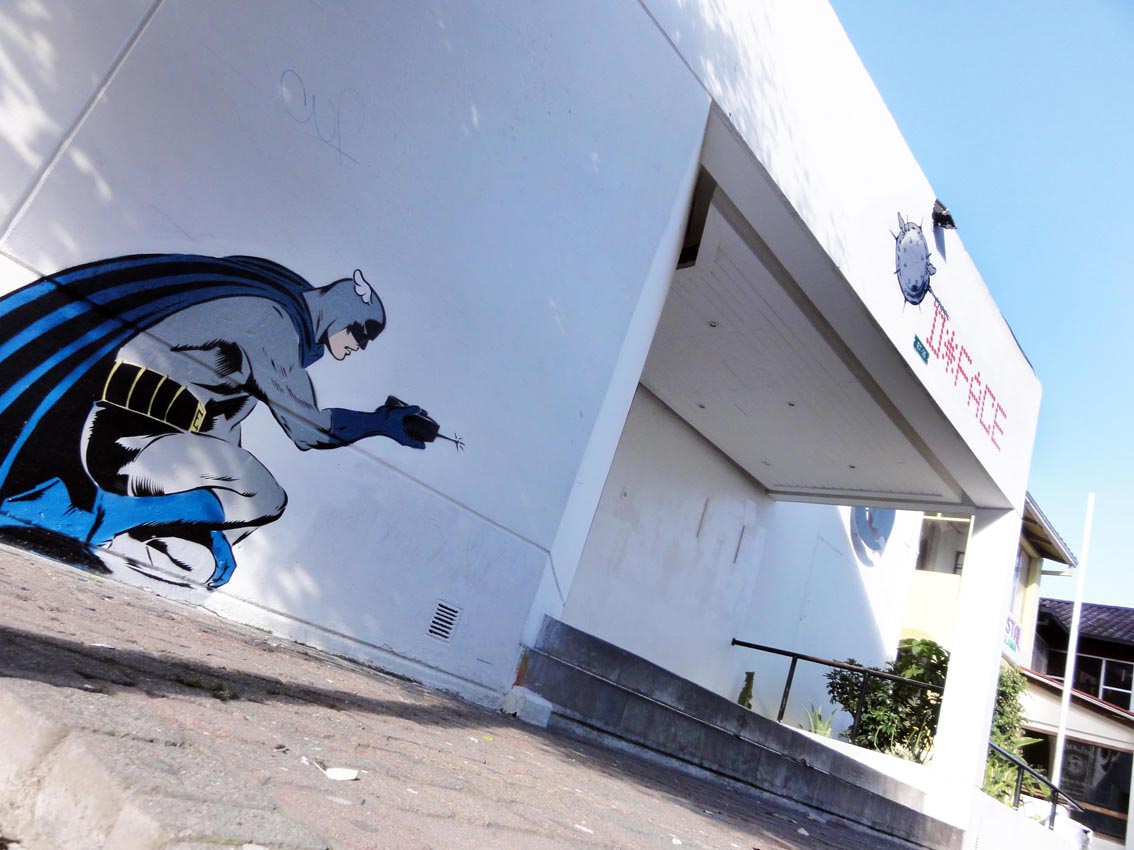 The next day we were heading back from having breakfast – fruit juice, coffee – hot milk with instant coffee powder, fried eggs, rice, salad and stewed chicken… ok so a weird combination especially to my English taste buds whose breakfast normally consists of a cup of tea… but for $1, it not only tasted great but was stupid cheap… walking back up to the hostel we were stopped by a middle aged woman asking if I was responsible for the large black and white poster down the road, normally my immediate response would be a stern ‘NO, i’ve no idea what your talking about’, followed by a swift exit, but she didn’t look angry and being only about 4ft tall, I thought either way I could probably out run her, unless off course I’d mistaken her size for race dog speed… anyways Uri stepped in with the translation and charm, not needed on this occasion as she was asking if I’d like to paint her Church… uhhh, normally somewhere I stay well clear of for many reasons, but she explained the Church was really a concrete block that regularly got scrawled on and she’d really appreciate the ‘decoration’, only issue, no skulls… uhhh well that screws things up a bit but ok, given that it was my last day and I only had black paint and limited pieces without skulls I got busy painting a striped piece, time was tight as that night was the Festival opening and I had been asked to paint a car at that… so sensing a nice piece of irony I called up Vomitorium and asked if he’d like to jump on the wall… of a church!! He was 100% down, but a few hours away… so i’d got busy and left him some space to get on when he arrived, the result, as unusual a mix as my breakfast that morning, but I liked the flavor!… 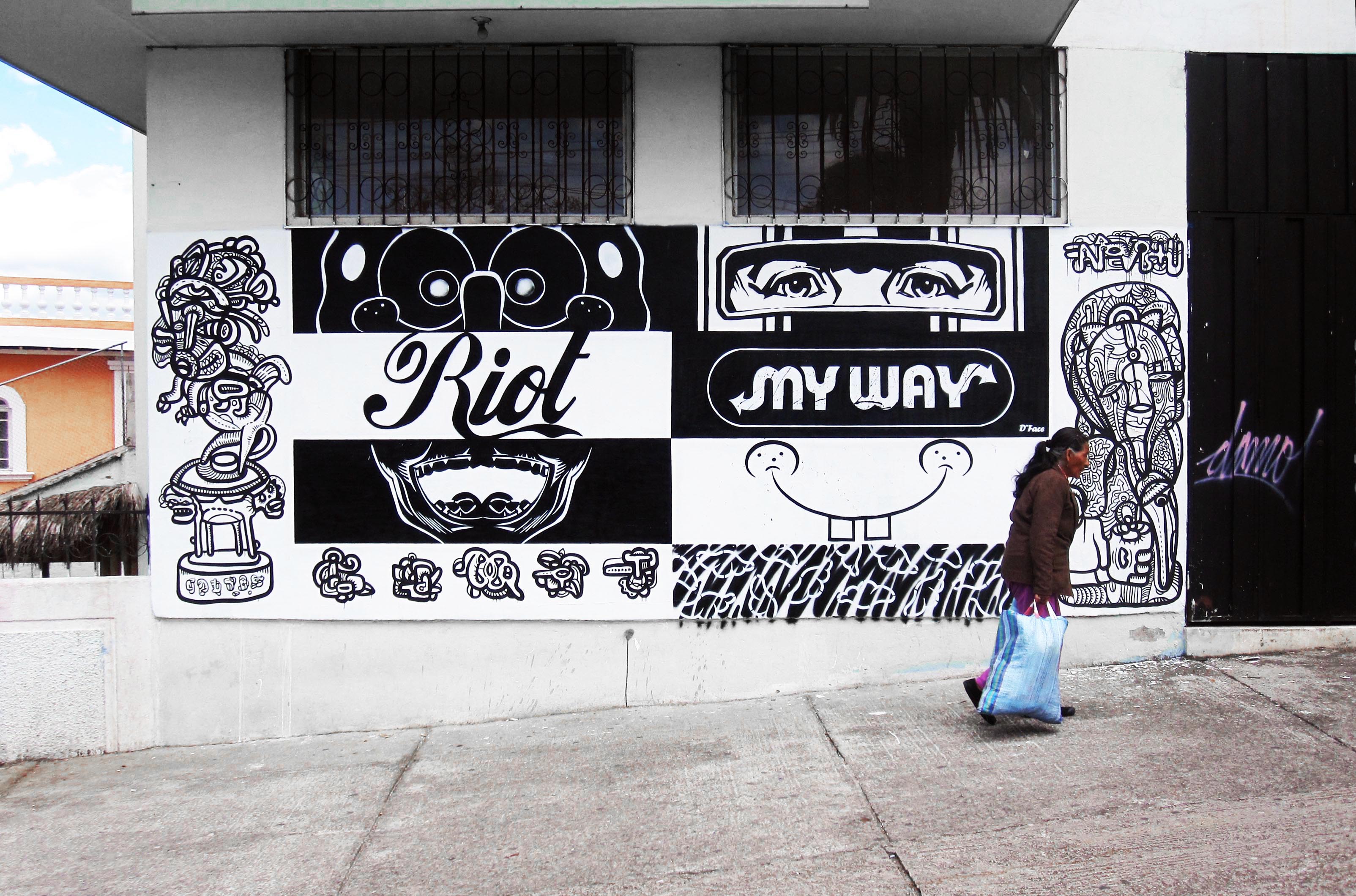 Next stop, the festival and painting a car… I’ll be honest when I say I like being watched painting as much as I like dog shit – not a fucking bit – so the idea of standing in a square in the midst of a festival with bands playing, drunk people and me painting a car wasn’t my idea of a fun night out… but what the hell… the car turned out to be a mark 1 Nissan Patrol, which having been my car, i’d have painted matte black and called it a night… still I’d prepared a little something… split the car in half, paint one side with my wing pattern work and the other side paint white, add a few stripes, add a skeleton driving a skeleton prisoner and instead of the ‘Policia’ I painted ‘Pocilga’ meaning ‘Pig Sty’… the locals loved it, the heavy Policia presence at the festival, uhhh, not so impressed… ok, time to make a sharp exit, I think i’ve outstayed my welcome in this city… 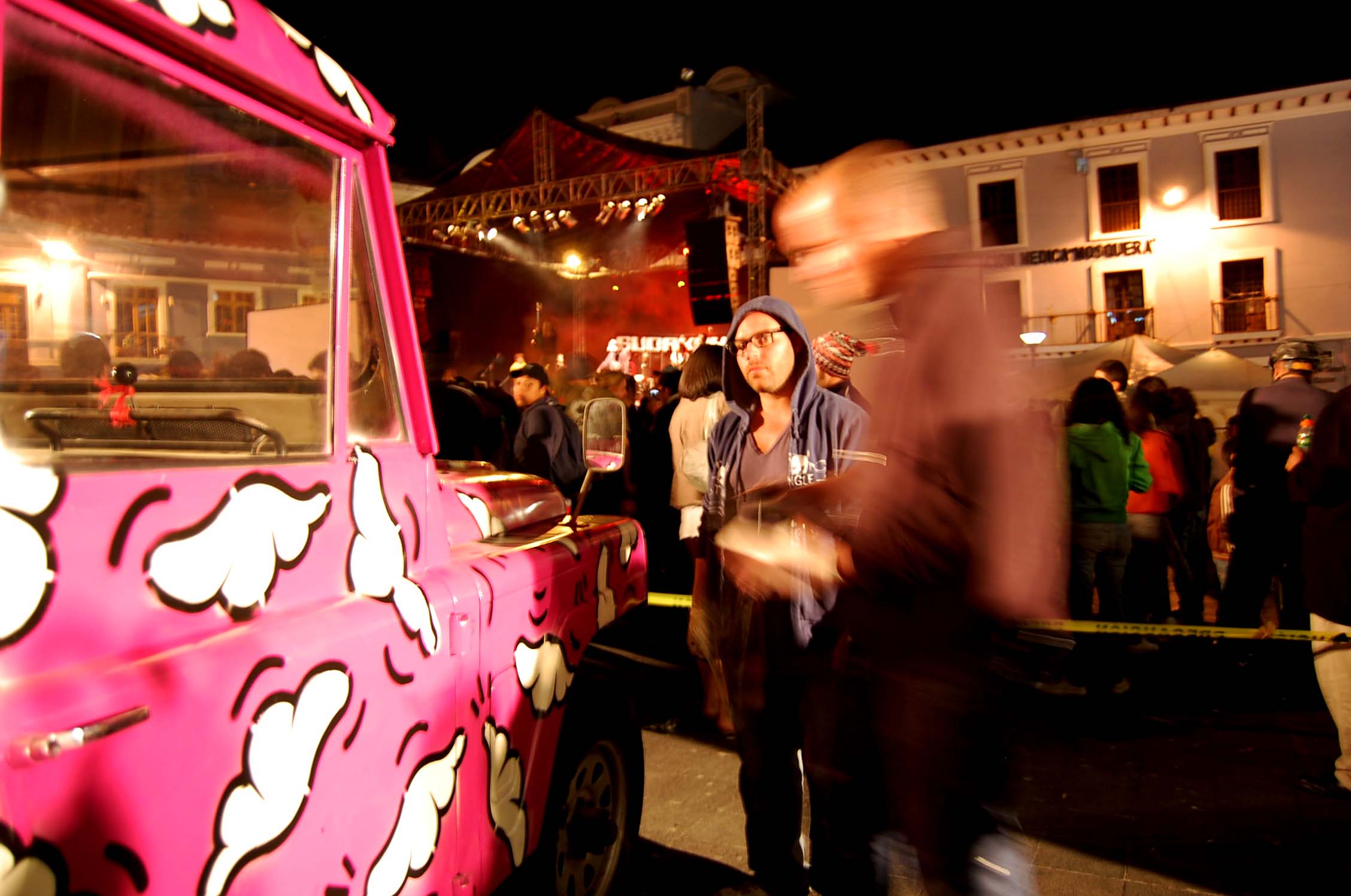 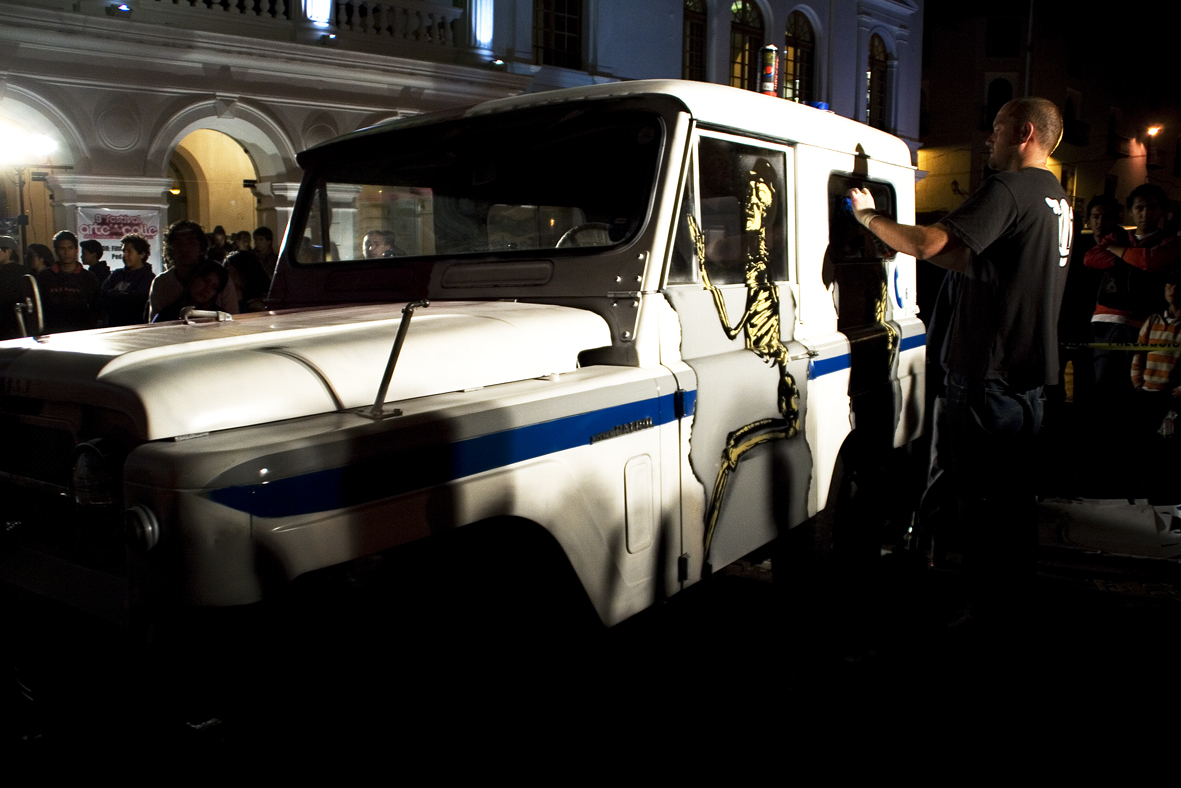 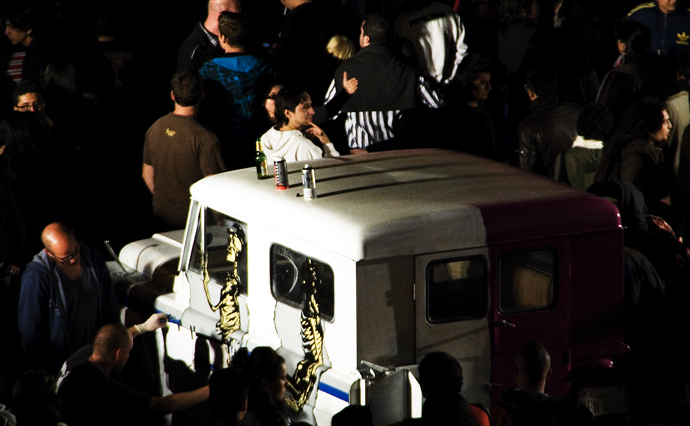 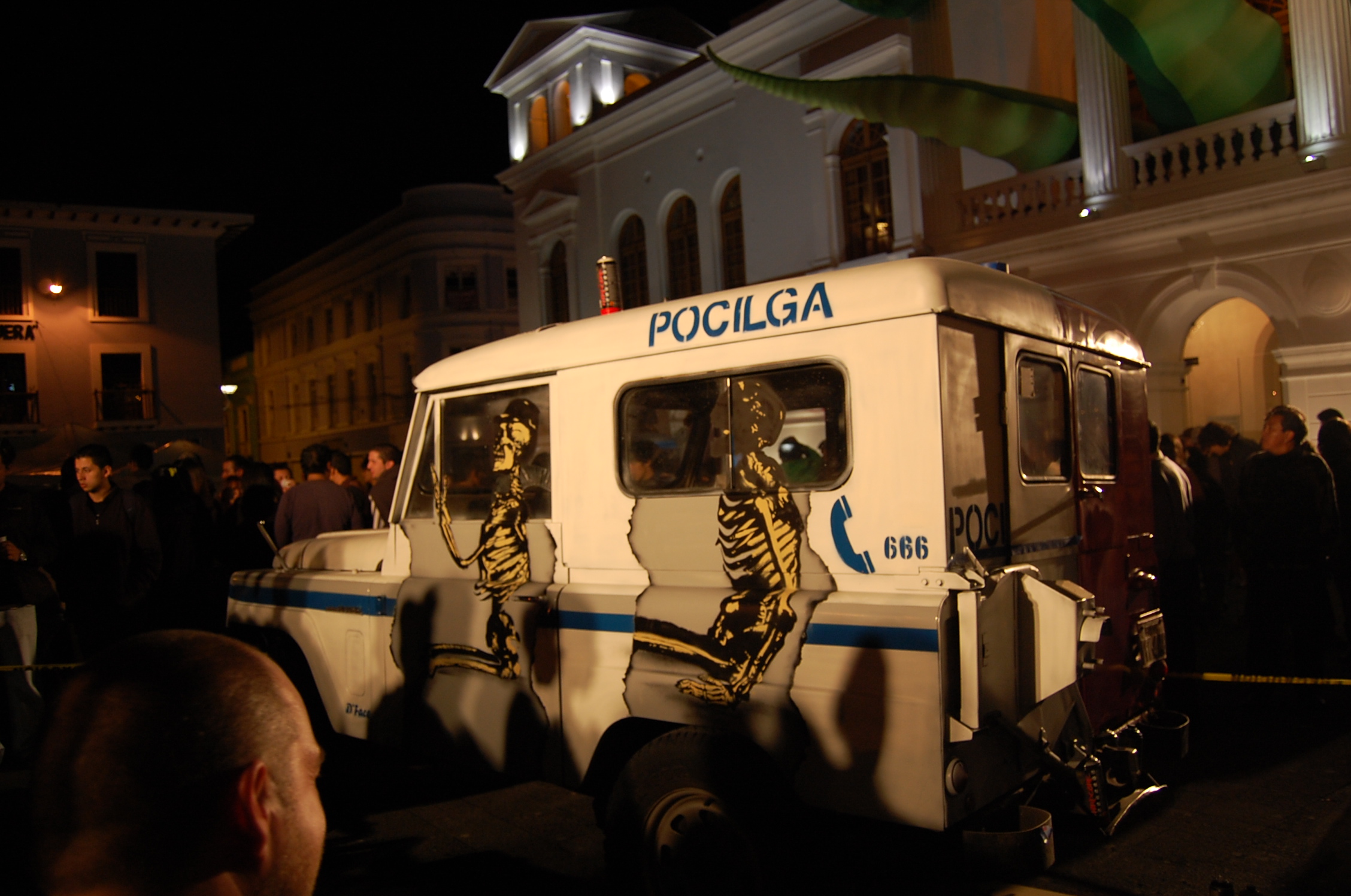 …but not before leaving a few ‘Dog-Tags’ around the city, including one outside the local police department’s door. 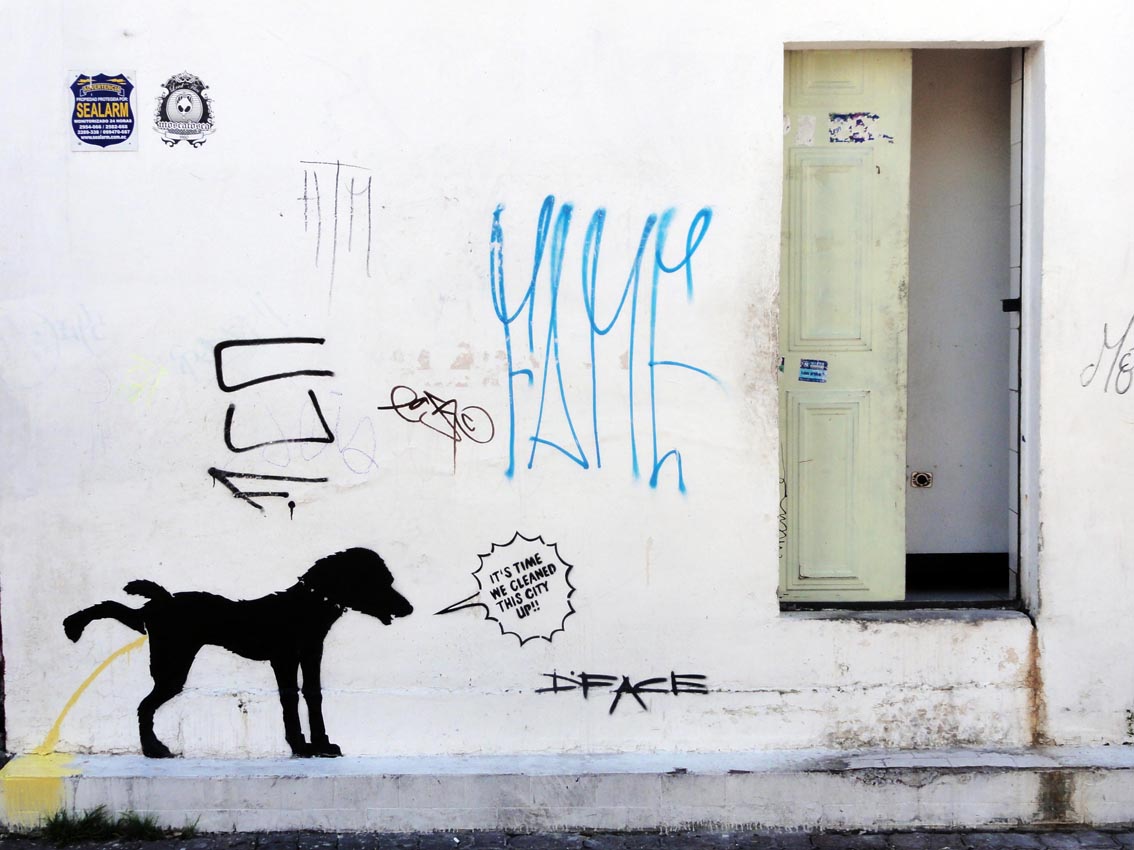 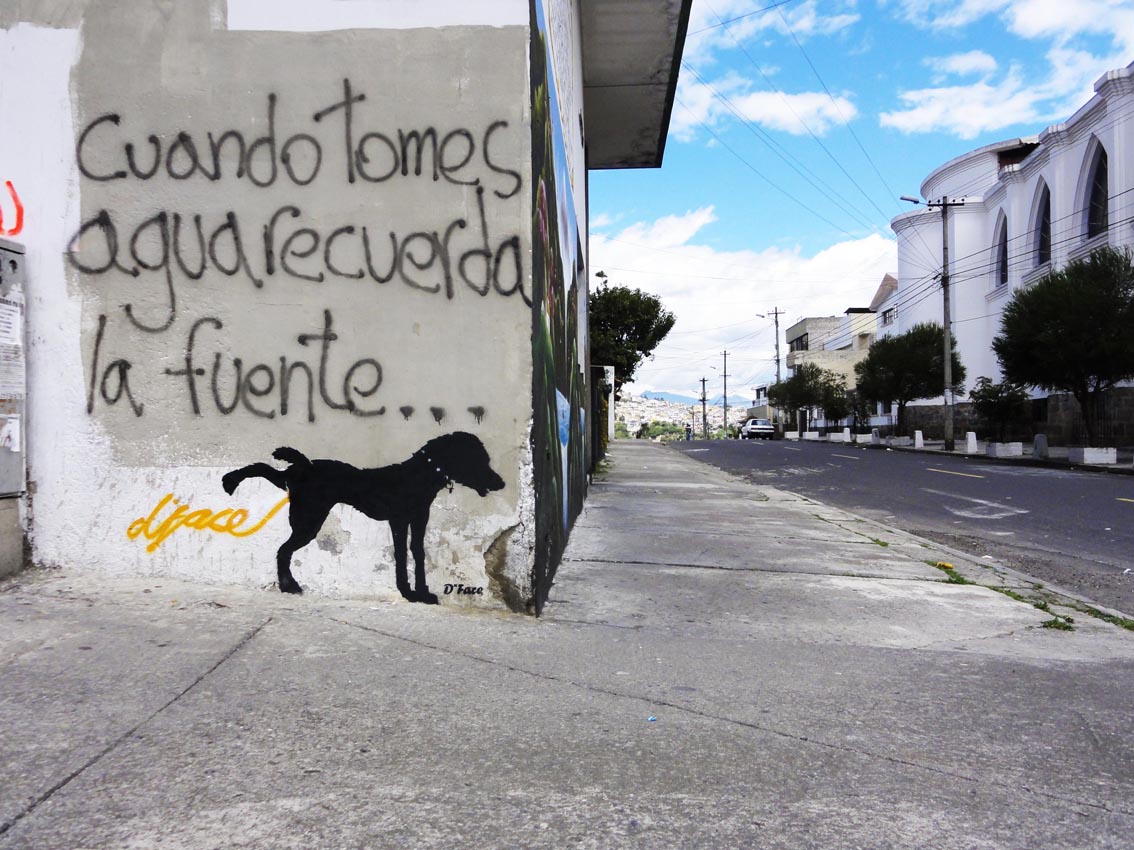 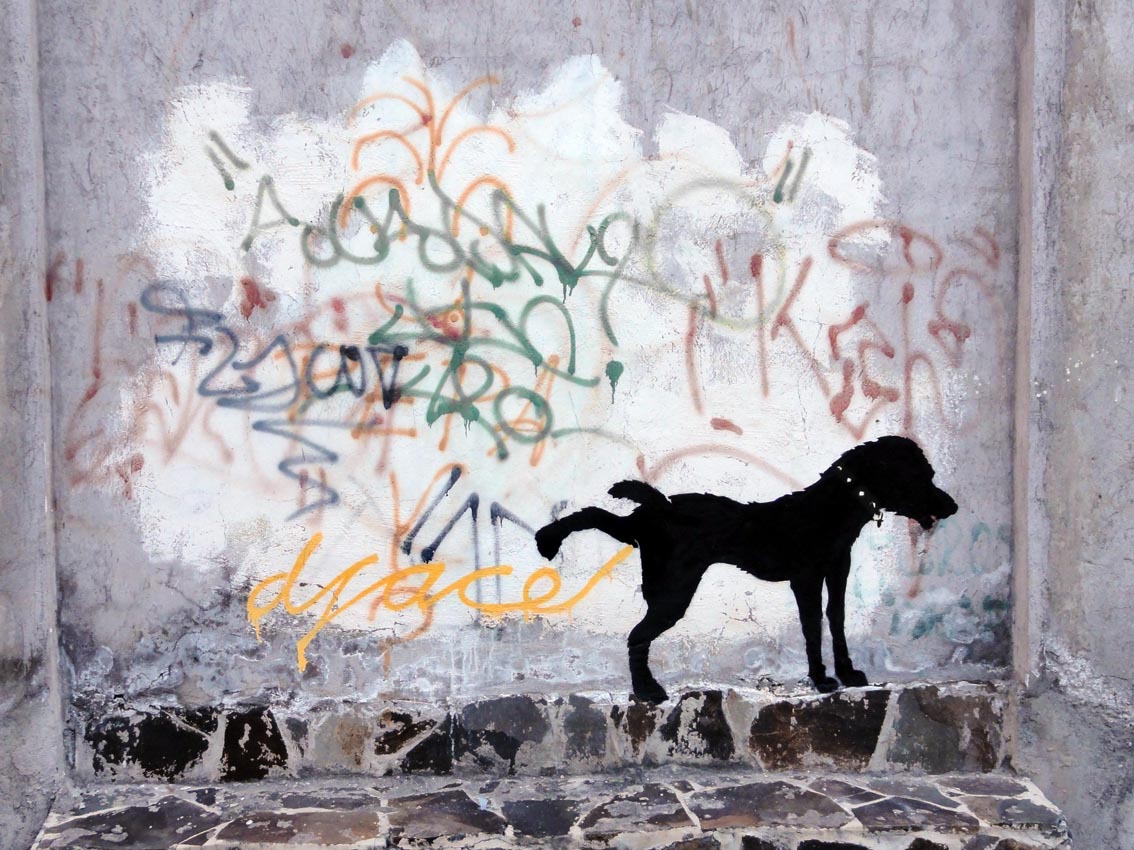 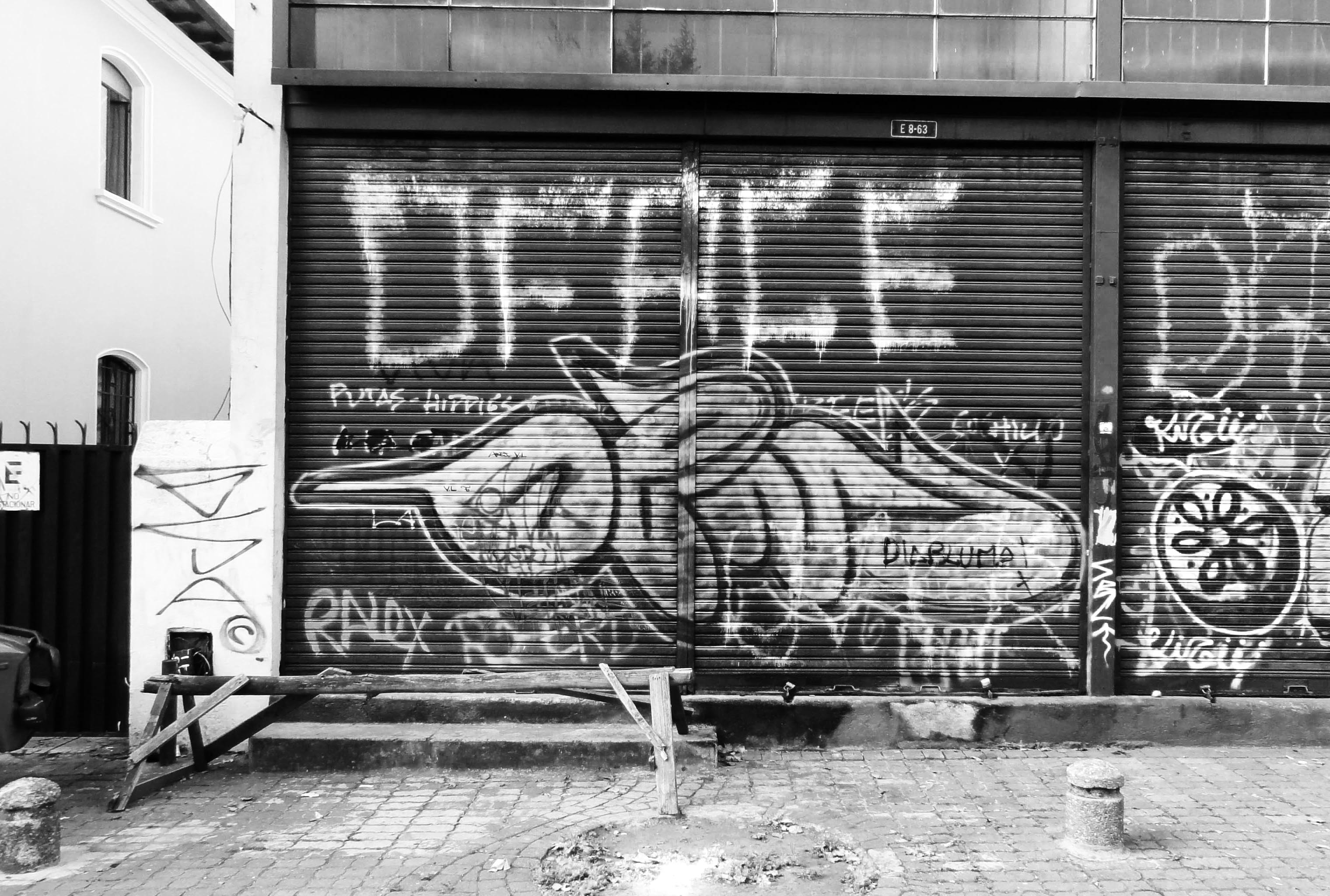