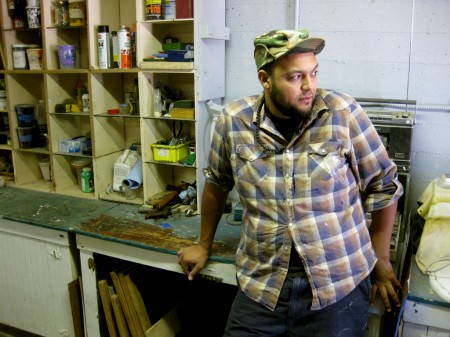 Last month, graffiti writer, illustrator, designer and fine artist Kofie’One / Augustine Kofie kindly granted AM access to his studio spaces in the Filipinotown district of Los Angeles. Kofie was preparing for “Retrofitted and Other Forms of Vintage Futurism”, his debut solo exhibition at White Walls Gallery in San Francisco which opens on Saturday, October 9th.

Those familiar with Kofie’s work will immediately recognize his new canvases. They’ve retained the style which has become his trademark: an architectural feel, an emphasis on precision and balance, a retro color palette of earth tones, and nods to artistic movements of bygone eras including Constructivism and Futurism. A quite different direction for the artist, however, is the series of some 40 triangular sculptures he has created out of colorful bits of found wood.

What ties together all the pieces of the show is Kofie’s intentional blurring of their time frames, between past, present and future.  This is also reflected in the title of the exhibition which he says describes “reinterpretations of the old and discarded into new ways of looking at imagery — a way of rethinking and reapplying the past in creative ways“.

“Retrofitted and Other Forms of Vintage Futurism” runs until November 6th. See more photos of Kofie’s studio and a preview to some of his latest work after the jump. 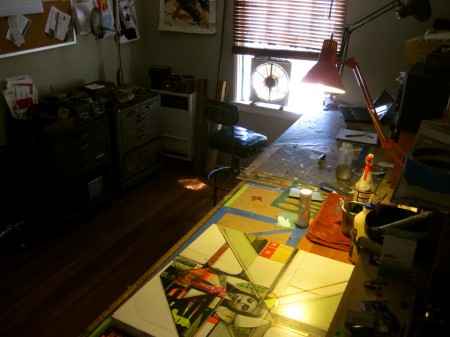 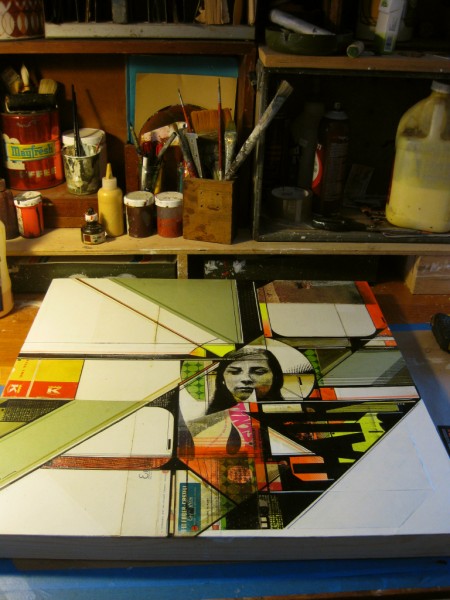 ‘Her clutters under control’

One of Kofie’s triangle sculptures made from reclaimed wood